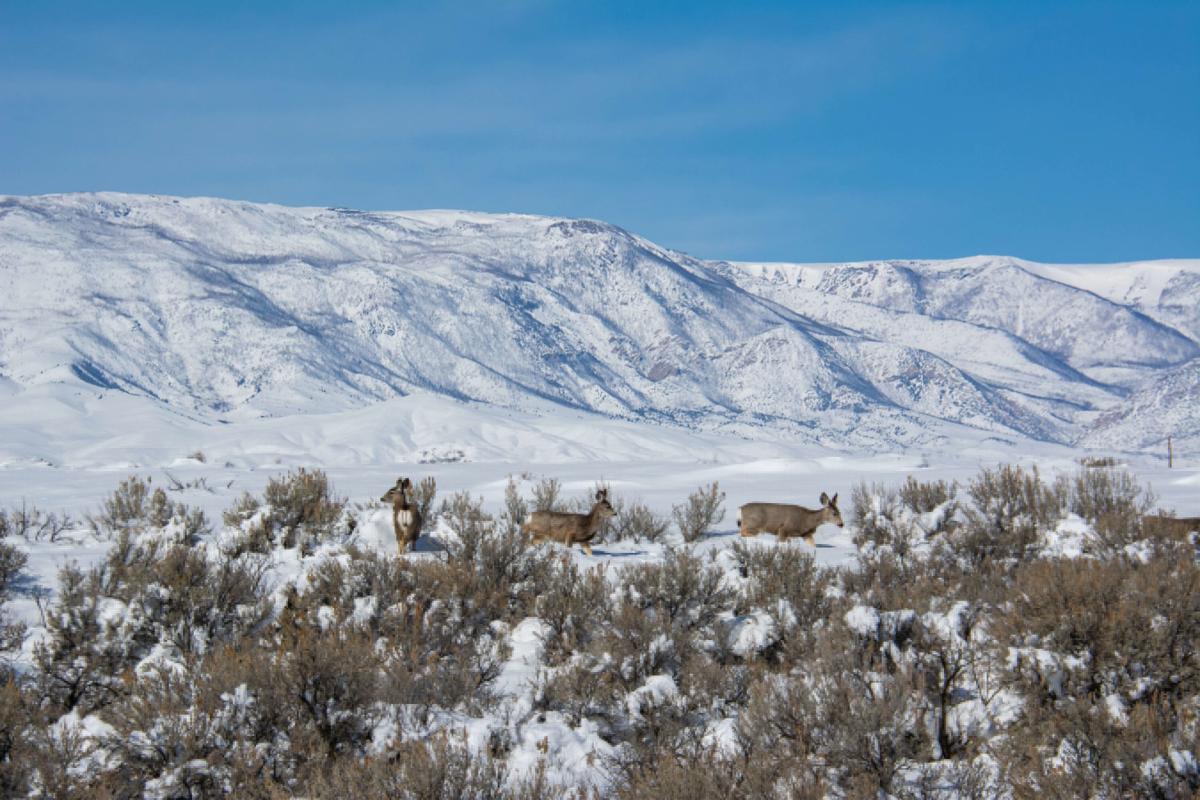 A group of mule deer walk through sagebrush on a snow-covered prairie. 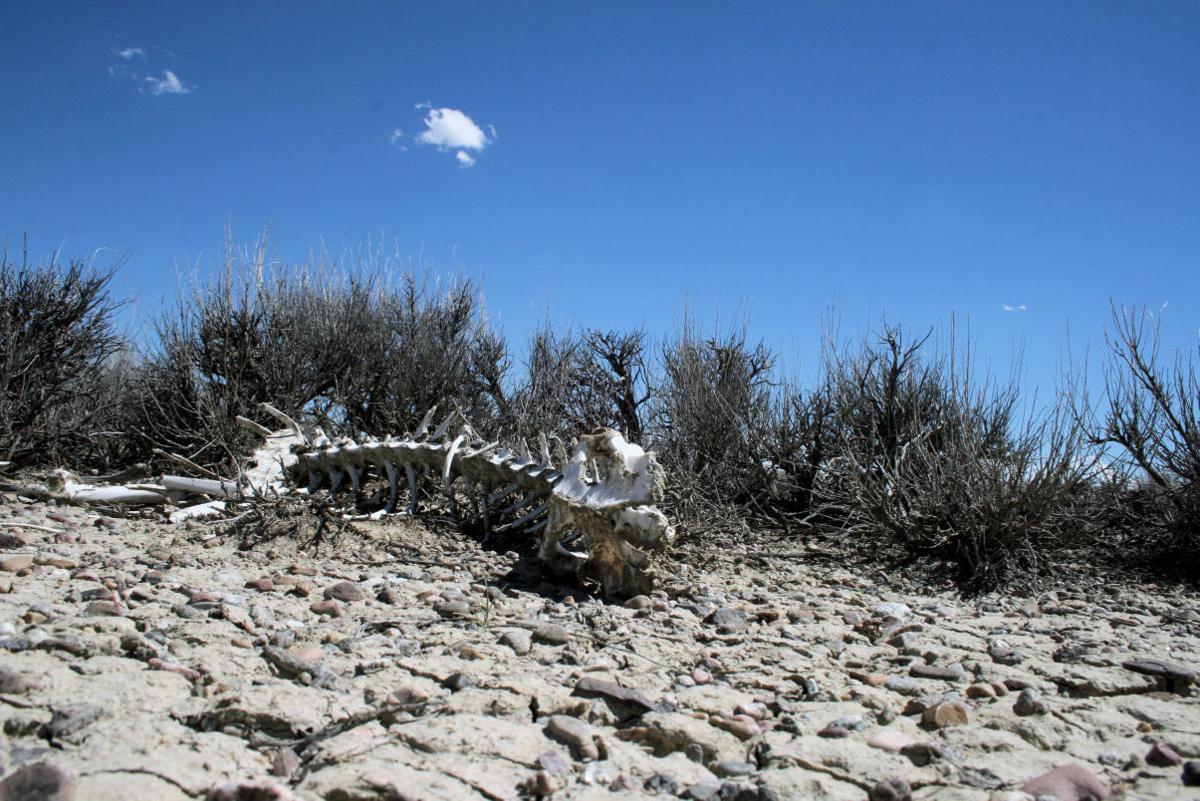 An antelope skeleton rests in the dry dirt near a patch of dead sagebrush in southwestern Wyoming. Sagebrush across a wide stretch of the landscape died in 2012 and 2013 due to extreme hot, dry temperatures and then extreme precipitation. A recent report explains the cause, helping biologists and land managers know how better to respond if and when it happens again.

When Jill Randall and Karen Clause saw the extent of the deaths, all they could do was sit on a hill and stare.

Surrounding them on all sides, for as far as they could see, were chunks of skeletal sagebrush. The plants are a critical food source for hundreds of native species in Wyoming, and so many of them were dried and brittle.

“All of us have seen small areas where there’s some sagebrush mortality, but to go and see literally sections of it dead, we don’t see it that way,” said Clause, range management specialist with the Natural Resources Conservation Service. “It was a pretty somber moment.”

Few had really heard about the die-off. It was in the middle of no man’s land, between Farson and Fontenelle Reservoir in southwest Wyoming. A technician for the Natural Resources Conservation Service noticed it when he was monitoring soils and reported back to Clause and Randall, a wildlife and habitat biologist with the Wyoming Game and Fish Department.

So Clause and Randall spent hours driving through the area documenting the die-off and noting anything that could have contributed. They compiled a report explaining the gravity of the situation.

Now, five years later, a handful of researchers from the University of Wyoming, the Yale School of Forestry and Environmental Studies and the U.S. Geological Survey published a paper explaining the die-off. The cause, ironically for a plant known for growing in an arid climate, was a combination of severe drought and then excessive water.

Many of the bushes that died from drought have regenerated in an unprecedented show of strength. The ones that perished in newly formed ponds did not come back.

The lessons from a rather wonky study are far-reaching, researchers say. As the West’s climate becomes more variable, with more frequent periods of severe heat and drought and also extreme precipitation, even the most robust of the state’s plants may not be able to survive. And with those plants go the iconic species that depend on them, from trophy mule deer to songbirds to sage grouse.

Even more importantly, the die-off and subsequent research gave local biologists and land managers more tools to respond the next time stretches of the prairie fade away.

“It’s important to know that that’s how the sites operate,” Clause said. “On the extreme drought side of things we can take this into account and give sagebrush a break in terms of uses of the landscape.”

Randall and Clause tried eliminating every possibility for why thousands of sagebrush as old as 100 years would have all died within about two years.

They eliminated all natural causes like slope or harmful insects and manmade ones like pollution or land use. The only possibility left was that they’d died from climate conditions.

Sagebrush, a plant that covers much of the West from California to the Rockies, Canada to New Mexico, evolved to deal with harsh, dry conditions. But the conditions in 2012 were simply too dry, discovered Rachel Renne, lead author on the recently published paper in the journal “Ecology,” who studied the Wyoming sagebrush die-off as part of her master’s research.

In some of the sections they analyzed 2012 was both the hottest and driest year in more than a century. Anyone living in Wyoming in 2012 likely remembers it as the summer and fall of nearly unending fires. More than 1,300 fires burned about 600,000 acres creating a fire bill of about $110 million.

Renee knew that sagebrush depend less on the water that falls from the sky and more on the water that is in the ground, accessible to the plants. In that year, there simply wasn’t much of either, compounding, in some areas, already excessively dry conditions.

Sagebrush living in sandy soil seemed to survive better because the deeper layers of soil more consistently held water. But the plants that lived in soils heavier in clay perished, likely because water was unable to sink in far enough.

“We were able to reconstruct the conditions during a wet period and found that in locations where the plants were saturated there were more dead plants,” she said. “It hates to have its feet wet.”

While interesting, it’s the implication of the research that will likely have the greatest impact.

Sagebrush take time to recover. They can live up to 200 years, but that also means they don’t bounce back as quickly as other plants, Renne said.

The story didn’t end, though. Over the next few years, Randall and Clause noticed that much of the sagebrush that died of drought somehow came back to life, something they shouldn’t have been able to do.

“I always tell people when I’m talking about sagebrush it’s such a uniquely adapted plant, which is why we’re full of it,” Clause said. “It has so many mechanisms to cope with our environment of extremes, but what we’re seeing and documenting is there are extremes it can’t cope with.”

And when sagebrush communities die, or come close to death, it opens a hole for invasive plant species like cheatgrass, Medusa head or ventenata. Even if sagebrush communities can regenerate after an apparent mass die off, it takes time. The megafauna that depend on the ecosystem — including mule deer, pronghorn and sage grouse — would not be able to tolerate years of depleted resources, Randall said.

The solution isn’t an easy one. Work to slow climate change and its resulting extreme events is one option, said Kyle Palmquist, co-author on the study who did her post-doctorate work at UW. Westerners should also be aware of the value of sagebrush ecosystems and their relative frailty.

“As someone who looks at mule deer as an animal they daydream about, and when they’re outdoors spends most of their time looking at them, you can’t have one without the other,” said Jesse Johnson with the Wyoming Wildlife Federation. “As the sagebrush goes, so does Wyoming’s mule deer.”

But even knowing extreme events will likely become more common, Clause and Randall have reason to hope. If people notice die offs in the future, land managers understand how to potentially tweak land uses to aid in restoration.

“I’m concerned on a global perspective about sagebrush, but if there is one last sagebrush stronghold in the American West,” Clause said, “it will be here.”

A Billings woman was injured and a Wyoming man died after their car crashed into a semi near Greybull on Friday.

A state law enforcement panel has rescinded a former Cascade County sheriff's decertification in an agreement that would allow him to return to law enforcement in four years.

UPDATED: Butte man accused of having sex with 13-year-old

A 20-year-old Butte man has been charged for allegedly having sex with a 13-year-old girl in Butte last fall.

The prevalence of chronic wasting disease in Montana has created “a new reality” for hunters and wildlife managers, just two years after it wa… 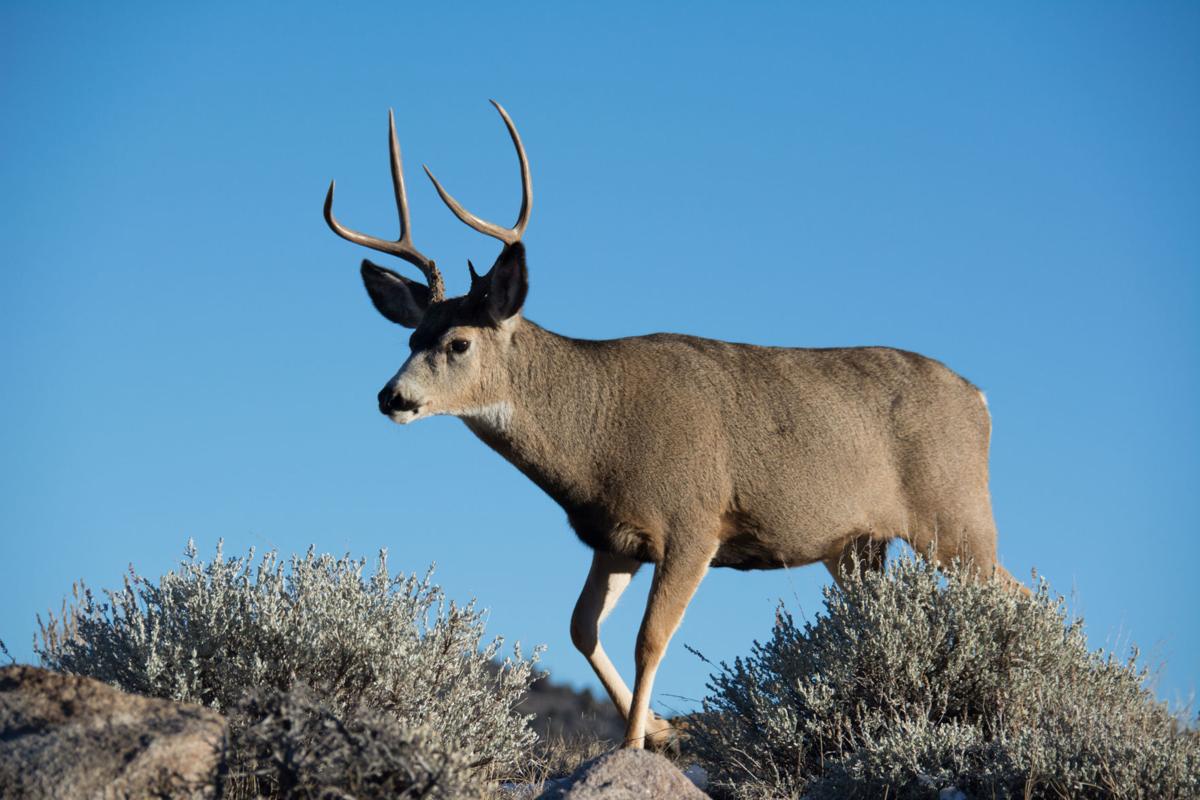 A mule deer buck crosses the prairie between patches of sagebrush, one of its primary food sources. 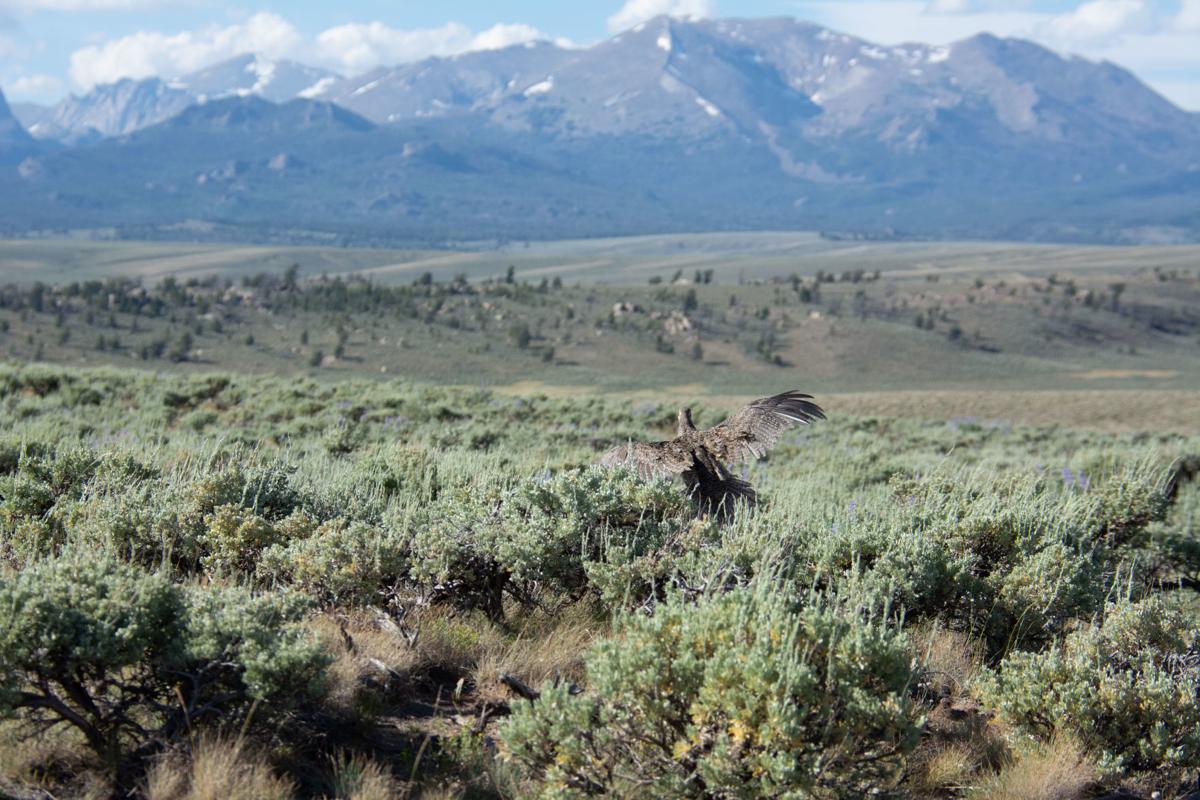 A sage grouse hen springs up from the cover of sagebrush. Sage grouse rely on their namesake shrub for food and shelter.

A group of mule deer walk through sagebrush on a snow-covered prairie.

An antelope skeleton rests in the dry dirt near a patch of dead sagebrush in southwestern Wyoming. Sagebrush across a wide stretch of the landscape died in 2012 and 2013 due to extreme hot, dry temperatures and then extreme precipitation. A recent report explains the cause, helping biologists and land managers know how better to respond if and when it happens again. 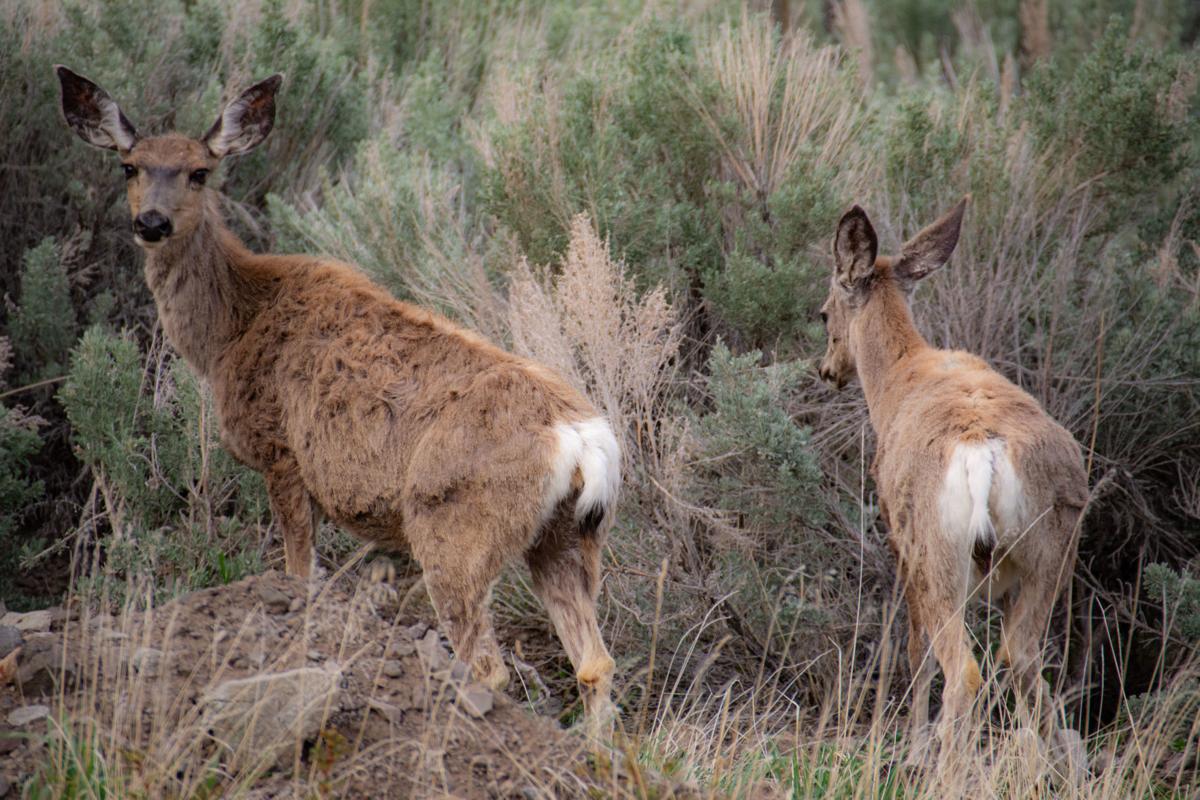 A mule deer doe and fawn walk through the sagebrush. The shrub is a critical food source for hundreds of species across the state including mule deer, pronghorn and sage grouse.