BILLINGS — Nurses fill the hospital room to turn a patient from his stomach to his back. The ventilator forcing air into him is most effective when he’s on his stomach, so he is in that position most hours of the day, sedated and paralyzed by drugs.

Lying on his stomach all those hours has produced sores on his face, and one nurse dabs at the wounds. The dark lesions are insignificant given his current state, but she continues just the same, gently, soothingly, appearing to whisper to him as she works.

The man has been a patient at Billings Clinic for nearly a month, most of that time in the hospital’s intensive care unit. He is among other patients, room after room of them, with the same grim tubes inserted down their throats. They have COVID-19 — the vast majority unvaccinated against the virus, the hospital says. Visitors generally aren’t permitted in these rooms, but the man’s mother comes most days to gaze through a glass window for the allowed 15 minutes.

This all happened Friday. He was dead, at age 24, by Sunday morning.

The hospital’s morgue cart arrived at the ICU — as it frequently has these days — then the room was sterilized, another patient took the man’s place, and the cycle began again. In the past week, 14 people have died of COVID here, the state’s largest hospital.

“I do feel a little hopeless,” said Christy Baxter, the hospital’s director of critical care.

The situation has played out in hospitals around the nation since 2020. But now Montana is a national hot spot for COVID infections, recording the highest percentage increase in new cases over the past seven days. The state announced 1,209 new cases on Friday, and Yellowstone County, home to Billings Clinic, is seeing the worst of it. Last week, the county had 2,329 active cases, more than the next two counties combined.

What’s different from the early scenes of the pandemic is the public’s response. Not so long ago, the cheers of community support could be heard from the hospital parking lot. Now, tensions are so strained that Billings Clinic is printing signs for its hallways, asking that the staff members not be mistreated.

The ICU here has space for 28 patients but last Friday was operating at 160% capacity, Baxter said. To handle the overflow, nurses elsewhere provide care beyond their training as COVID patients fill other parts of the hospital. In the lobby of the emergency department, rooms roughly 6 feet by 6 feet have been fashioned with makeshift plastic walls. Ten members of the Montana Army National Guard arrived last week to help however they can. Hospital staffers volunteer to sit with dying patients. Beds line hallways.

“The problem is,” said Brad Von Bergen, the hospital’s ER manager, “we are running out of hallways.”

The hospital announced it may soon implement “crisis standards of care,” which basically means it will ration its equipment, staff and medicine, giving preference to those it can most likely save, regardless of vaccination status. It’s an ugly system, abhorred by those who will wield it, with tiebreakers in place to decide who potentially lives and dies. Other hospitals in Montana have taken similar steps.

An overcrowded hospital also means that a person ― say, one injured in a car crash in rural eastern Montana and needing advanced hospitalization ― won’t be able to get that care at Billings Clinic.

“We are at the point where we are not confident going forward that we can continue to meet all patients’ needs,” said Dr. Nathan Allen, the medical ethicist for Billings Clinic and its department chair for emergency medicine. “And that’s heartbreaking.”

“Nobody wants to be in a position where we may have to ration health care and potentially remove a ventilator from one patient who would likely die and give it to another,” said Dr. Scott Ellner, the hospital’s CEO. “Are we there? I would say we are very close.”

To some extent, that rationing is already happening. A patient still hospitalized here with COVID might have benefited from a machine, known as an ECMO machine, needed to keep his heart and lungs functioning. Operating that machine, though, requires at least one nurse, 24 hours a day, usually for two to three weeks. Typically, it would be a last-ditch effort for the most critical of patients. Even with that care, the prognosis for the middle-aged man would be poor. Without it, Baxter said, he will assuredly die.

“The reality is I can’t staff that,” Baxter said. “Do you give that optimal care to one patient or do you give great care to five?”

Billings Clinic would hire more than 100 additional nurses if it could. The staffing shortage is not unique to this hospital; it’s nationwide, meaning the needed help isn’t arriving anytime soon. Baxter tells the story of a young nurse who quit, saying he had grown tired of lying to patients he knew would die.

“The patients look at you with that fear in their eyes and say, ‘Am I going to make it?’” Baxter said. “You want to encourage them to not give up hope, but you also know the chances of survival are going to be slim.”

Recently, a patient’s dying wish was to have their preschool-age child come and sit with them, to see them one last time. That typically wouldn’t be allowed, but an exception was made, with staffers at the hospital draping the child in oversized protective clothing, goggles and an N95 mask. Afterward, the nurse and doctor sobbed with the patient.

“The moral distress of working in health care is for many, many people extremely high right now,” said Allen.

Intensifying that, he said, are patients or their loved ones mistreating doctors and nurses. Threats have on occasion required a police response. Screaming, profanity-laden insults are a daily occurrence. One patient threw his own feces at a doctor. Some, even in the face of an intubation tube, question the need to be vaccinated or the effectiveness of the medicine being prescribed.

Dr. Sara Nyquist, an emergency medicine physician, said she has been asked by a patient if she is a Republican or a Democrat.

Ellner, the clinic’s CEO, said he doesn’t understand what happened to civility. “There is a part of the society that wants to pretend that the COVID surge isn’t really happening,” he said. “But this is our reality every single day.”

Jennifer Tafelmeyer, a nurse in the hospital’s cardiovascular unit, said the best part of her job before the pandemic was helping patients improve, walking them down hallways, talking about diet and exercise, and eventually escorting them to the front door. That hasn’t happened in a long time.

As she told the story, she stopped to wipe a tear. Moments before, she had learned that one of the patients on this floor was not expected to survive the night.

Allen predicted Billings Clinic hasn’t yet seen the worst of the recent surge in infections.

“We are still seeing growing numbers in community cases,” he said. “And we know hospitalizations lag behind new diagnoses. Unfortunately, it can absolutely get worse than where it is at.”

In the meantime, he said, he expects the doctors and nurses here will rally as they have, taking comfort from words of thanks from many patients and gestures like a father bringing pizza to the emergency department as a show of appreciation for the care given his child.

“There is a part of the society that wants to pretend that the COVID surge isn’t really happening. But this is our reality every single day.”

Hospitals and many other health care facilities in Montana will soon face an uncomfortable choice — get employees immunized against COVID, in violation of a new state law forbidding workplace vaccine mandates, or forfeit federal dollars. 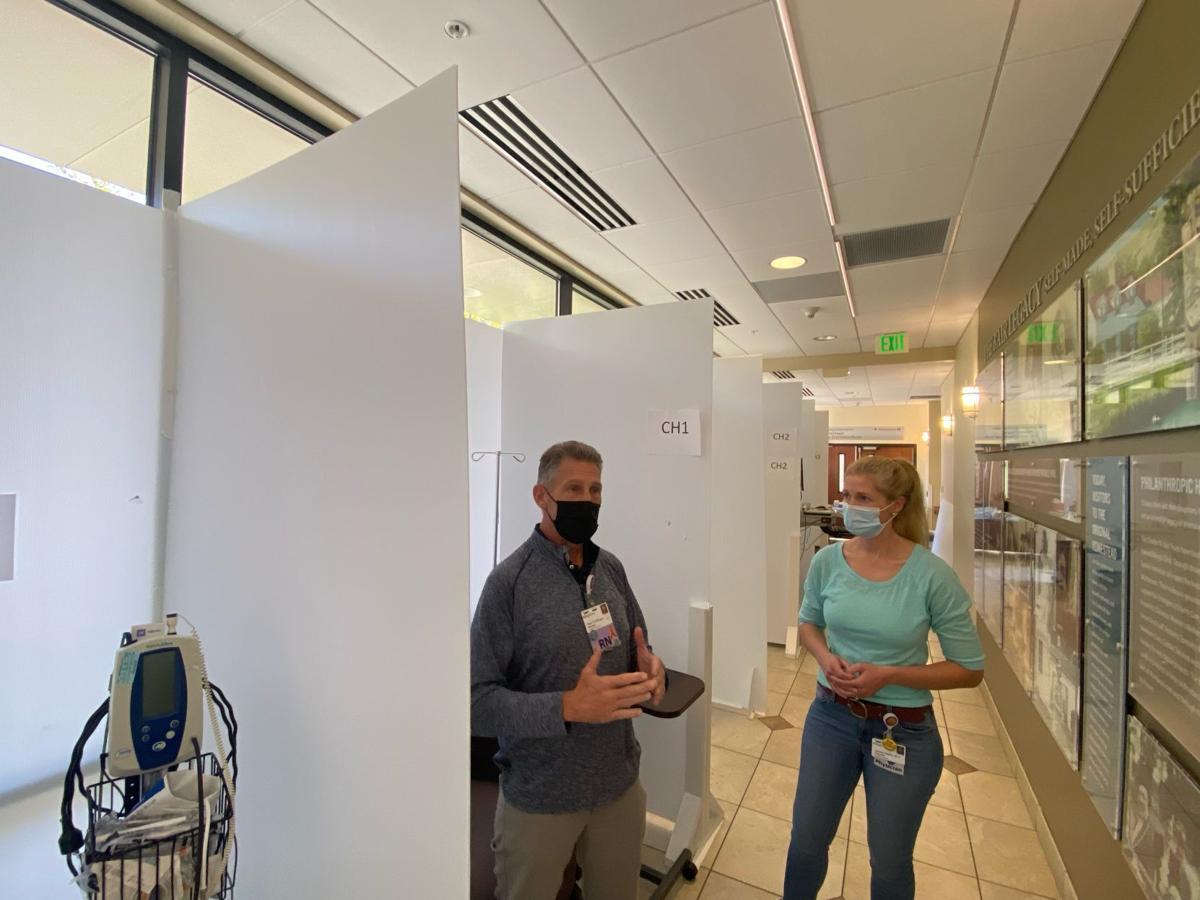 Billings Clinic emergency department manager Brad Von Bergen and Dr. Jaimee Belsky show a hallway at Billings Clinic that has been converted into several small patient rooms. The hospital’s intensive care unit has been over capacity amid a deadly surge. 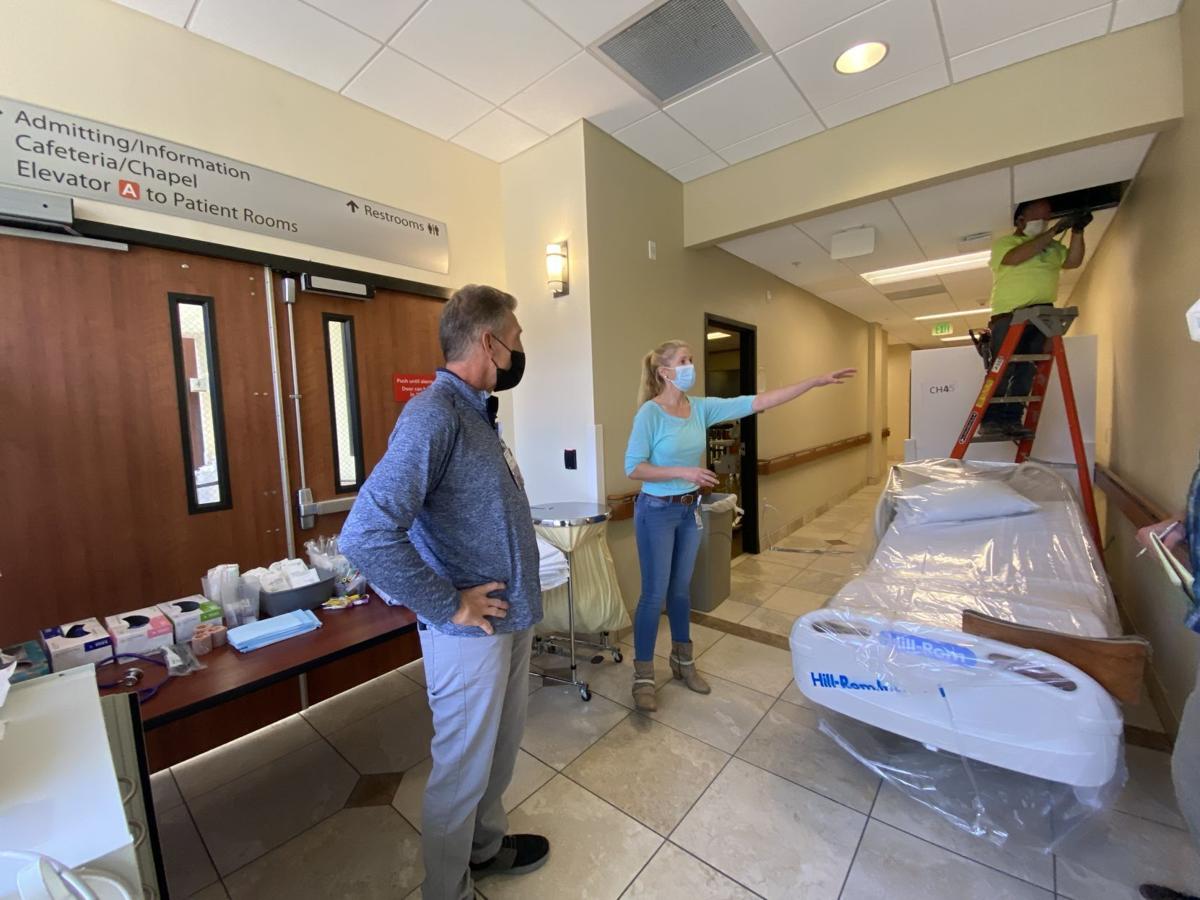 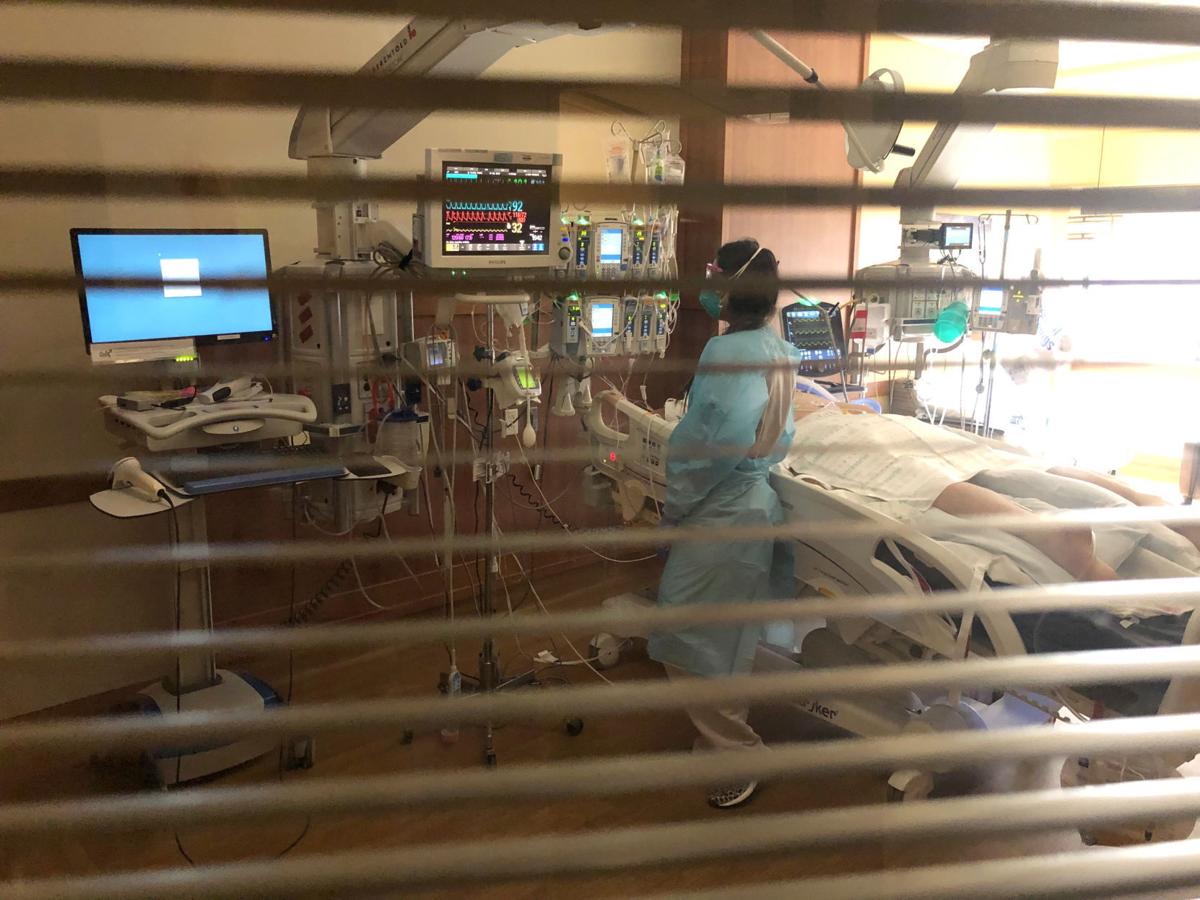 A nurse cares for a patient in the intensive care unit of Billings Clinic on Sept. 17. 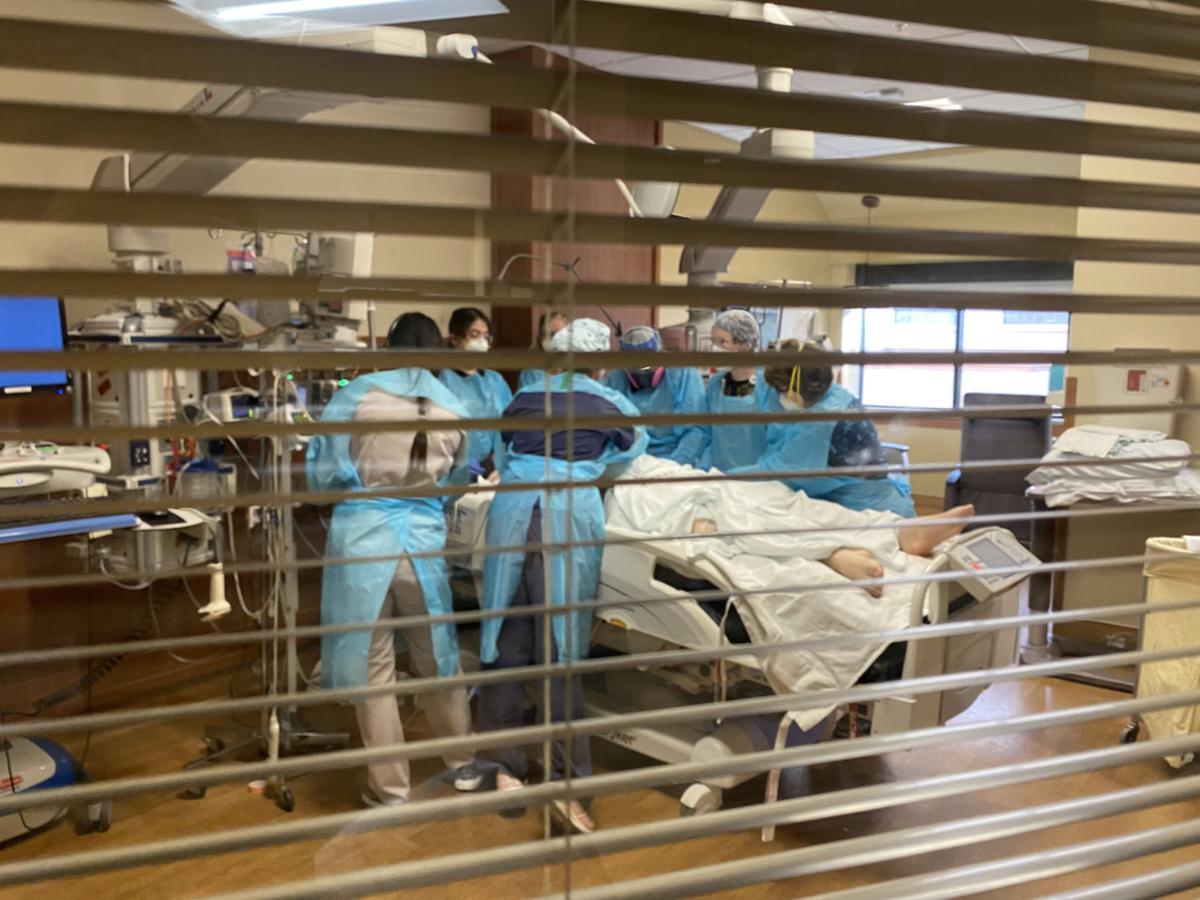 Nurses at Billings Clinic prepare to turn a patient from his stomach to his back in the hospital's intensive care unit on Sept. 17. 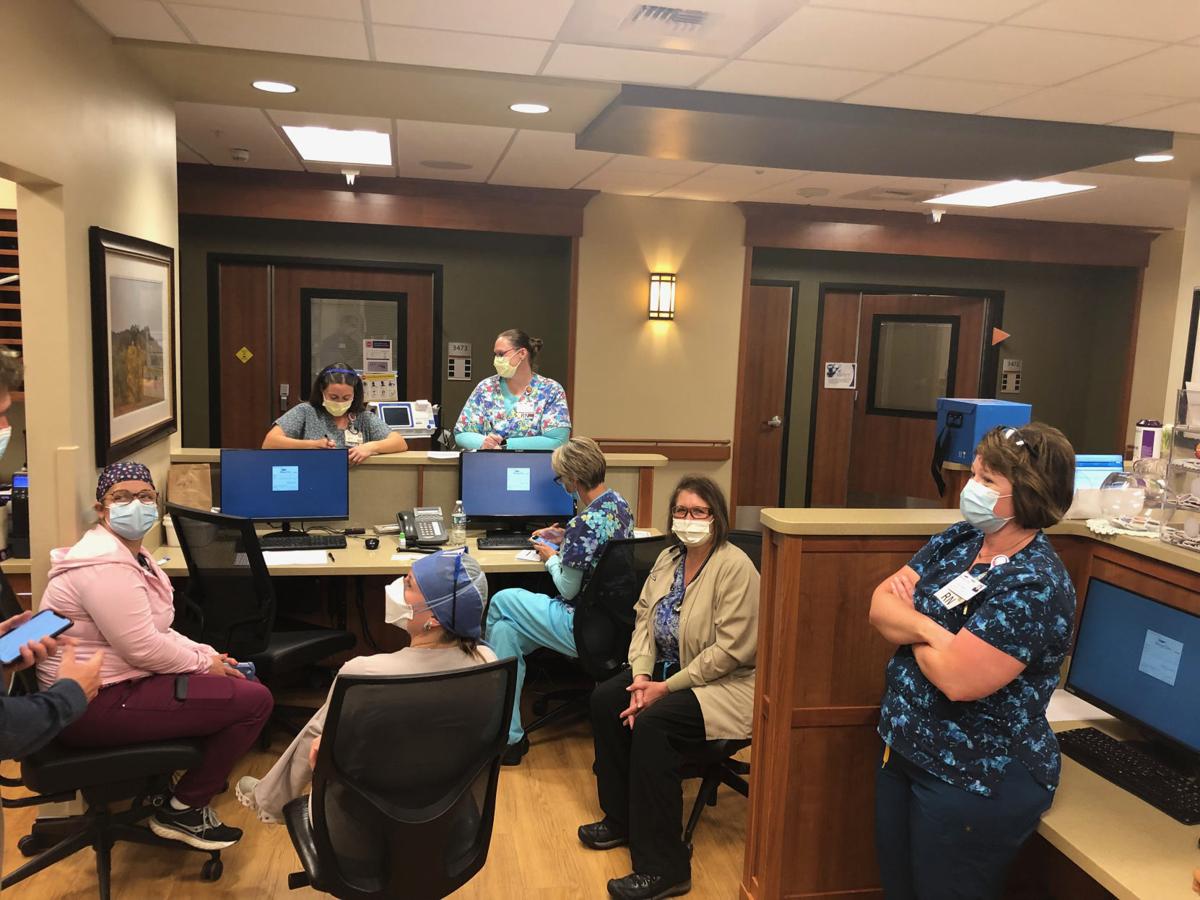 Christy Baxter (far right), director of critical care at Billings Clinic, meets with nurses in the hospital’s cardiopulmonary unit on Sept. 17. The unit houses overflow patients from the ICU.