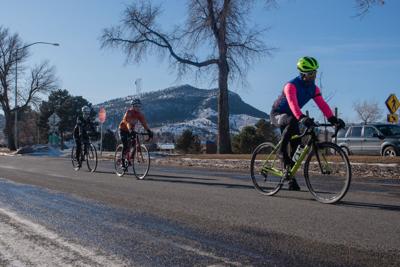 On a Sunday afternoon in downtown Helena, where the winter chill had briefly given way to sunny skies, joggers and cyclists clogged the city parks. Near a busy intersection, 19-year-old Tricia Fulkerson pedaled along an uneven sidewalk, focusing hard on her right foot.

For the past 15 minutes, she worked on the perfect angle to turn her heel and coax her shoe away from the pedal – a skill she would need to master before going out on the road. She gripped the handlebars and stared at the front wheel while her coach, Jesus Salazar, patiently and repeatedly instructed her through the process.

“Make sure to unclip a few meters before the stop,” he said. “Ease down on both brakes and don’t be afraid of twisting too aggressively.”

Fulkerson pedaled slowly and methodically while oscillating the length of the sidewalk. Her mind still focused on her right foot, she rode a short distance before slowing to stop and cranking her heel to the right, which jammed her knee into the frame. She finally found the perfect angle allowing the pedal to relinquish its hold on her shoe, and she safely placed her foot on the ground.

After mastering the act a few times, Fulkerson rode more confidently, boldly striding away from Salazar and fellow teammate Chloe. As she reached her stopping point, she gently squeezed the brakes, but the pedal, which had previously relented, refused to loosen its hold.

The gentle slide turned into a panicked and more forceful tug as she lost momentum and came to a full stop. Fulkerson balanced momentarily, teetering on the two wheels before gravity finally took over, and she slowly and helplessly tipped over onto the pavement.

While Fulkerson lay still tethered to the bike by her shoes, Salazar and Chloe enthusiastically cheered as if she had gone through a rite of passage.

Montana Cycling Lab is a local nonprofit committed to making the sport accessible to all Helena teens, regardless of financial means. Cycling requires a high upfront cost: the bike itself, proper attire, a helmet and shoes can easily cost upwards of $2,500. Luckily, for would-be cyclists between the ages of 13 and 19, Salazar has created a program that provides bikes, gear, nutrition and personalized training. He believes many adolescents may be interested in the sport but discouraged by the price.

"My parents never encouraged me to do sports," Chloe, 18, said about her lack of previous involvement. "I would've done sports much sooner if it wasn't so expensive. My family just couldn't afford it."

The program began in May 2019 and currently has three participants. When they started, none had ridden a bicycle for anything more than leisure, but after nine months at the lab, Liam and Chloe both ride to the top of MacDonald Pass for fun.

"Cycling has taught me perseverance and has completely changed how I think about myself," Chloe said. She once struggled with fitness and mental barriers and now credits cycling for her confidence and inner strength. "Once I finally got up Grizzly Gulch, after failing three times, I thought, 'Oh, I can actually do this!'"

Riding a bike should be a freedom available to everyone, Salazar believes.

"You don't need fancy clothes and bikes to race and win,” he said. “There is no catch and there is no judgement. The cycling industry is growing, bikes are becoming more technical and expensive – I don’t want any of these kids to be left behind.”

Salazar landed in Helena more than 15 years ago and is now well-known in the local bike community.

This reality seemed improbable to him growing up, considering that he didn't even have his own bike. Instead, he had a "neighborhood bike" called "The Frankie," which he shared with his many cousins. More than a casual commuter bicycle, they used it for jumping over fire pits and practicing BMX-style tricks. When "The Frankie" would inevitably malfunction, the boys had to fix the problem themselves because the bike was their only option.

"The Frankie" may have taught Salazar basic bicycle mechanics and how to jump over fire pits, but he never truly tested his endurance until he bought a $500 mountain bike to keep up with his girlfriend, now wife, on the trails around Helena. After she patiently taught him the basics of mountain biking, he took his heavy Wal-Mart mountain bike and entered into a local race.

"Somebody has to be the last one," he said with a laugh.

Despite his race placement, Salazar was hooked and soon began seriously training for future races. He upgraded his gear and nutrition and climbed the ranks to become a noticeable presence in the Helena bike scene. And the mental and physical strength Salazar has developed over the years he now wants to pass on to others.

"This isn't only about biking," he said. "The lab teaches these kids math, science, nutrition, focus and dedication."

Participant Liam Mitchell, 19, described the physical and mental benefits of joining the lab as having developed his "spidey senses." Training his body and mind provided just one benefit of participating in the lab, noting "I've really learned how to eat and properly nourish my body."

As the Montana Cycling Lab's longest participant, Mitchell has trained with Salazar since May 2019 and said he felt astonished to learn what his body could do. He now enjoys four-hour rides on his bicycle, pedaling through town, up hills, and over mountain passes, but only if he adequately nourished his body. Salazar taught him that preparation for a big ride begins the evening before with a good night's sleep, then a carbohydrate-filled, nutrient-dense breakfast, and enough food to keep them going for the duration of the ride.

If participants do not correctly prepare, Mitchell said, Salazar will not let them join the group ride as a matter of safety. Salazar always pushes the participants of the lab, teaching them persistence and mindfulness, on and off the bike.

For a sport like cycling, which has many proven benefits for developing youth, the lab extends to teens of all social and economic backgrounds. Along with used clothing, shoes and accessories, the lab accepts bike donations from members of the local cycling community. A recent bike donation encouraged Chloe to begin training for cyclocross – a more technical version of the sport.

"She was getting really good at the road bike, and then this (cyclocross) bike came in, and it was just perfect for her," Salazar said, "and now we're training technique, and she is good, wow!"

On a clear winter day, Fulkerson rode behind Salazar and in front of Chloe as they descended Last Chance Gulch toward Carroll College. They rode quickly and strategically before entering Centennial Park, the perfect place to practice a few hot laps.

Chloe grimaced a bit when Salazar told her to take the lead, but then a look of determination crossed her face. Hot laps are fast and hard circuits, and Salazar wanted to do many of them before moving on to technical training.

Chloe rode to the front of the pack, pedaling slowly to warm up her legs. She increased her cadence and climbed up a steep hill with Fulkerson and Salazar close behind – her speed only growing as the path leveled out because there is not a moment of leisure in a hot lap; it would be over soon.

Their hearts fiercely pounded as they finished the final lap. The girls breathed quickly and eagerly reached for their water bottles while Salazar smiled proudly, gushing about how fast Chloe has become.

Chloe is strong and confident on her bike saddle. She has worked hard to get to this point, and it shows.

Fulkerson sat in the grass, snacking on orange-flavored goo, looking elated after her first outdoor ride. She has just met her first cycling milestone; riding on the road takes confidence and endurance, and Salazar compliments how quickly she is progressing, but he seems to know she is ready for more.

Fulkerson watched while Salazar and Chloe practiced dismounting and sprinting up a nearby hill, part of Chloe's cyclocross training.

"I think you're going to like cyclocross too," he breathlessly hollered while jogging with his bike on his shoulder. Fulkerson nodded enthusiastically.

"These kids are really good athletes and they're really passionate," he said. "They just need to be given a chance."

Montana Cycling Lab is always accepting monetary and gear donations. For information on how to become a participant or a volunteer visit https://montanacyclinglab.org or stop by 619 N. Last Chance Gulch.

Women gather for ice-fishing workshop at Helena Valley Regulating Reservoir as part of the Becoming an Outdoors Woman program.

Longtime Tri-Lakes Fire Chief Bob Drake retired this week, saying he is looking forward to taking a step back after 25 years with the department. 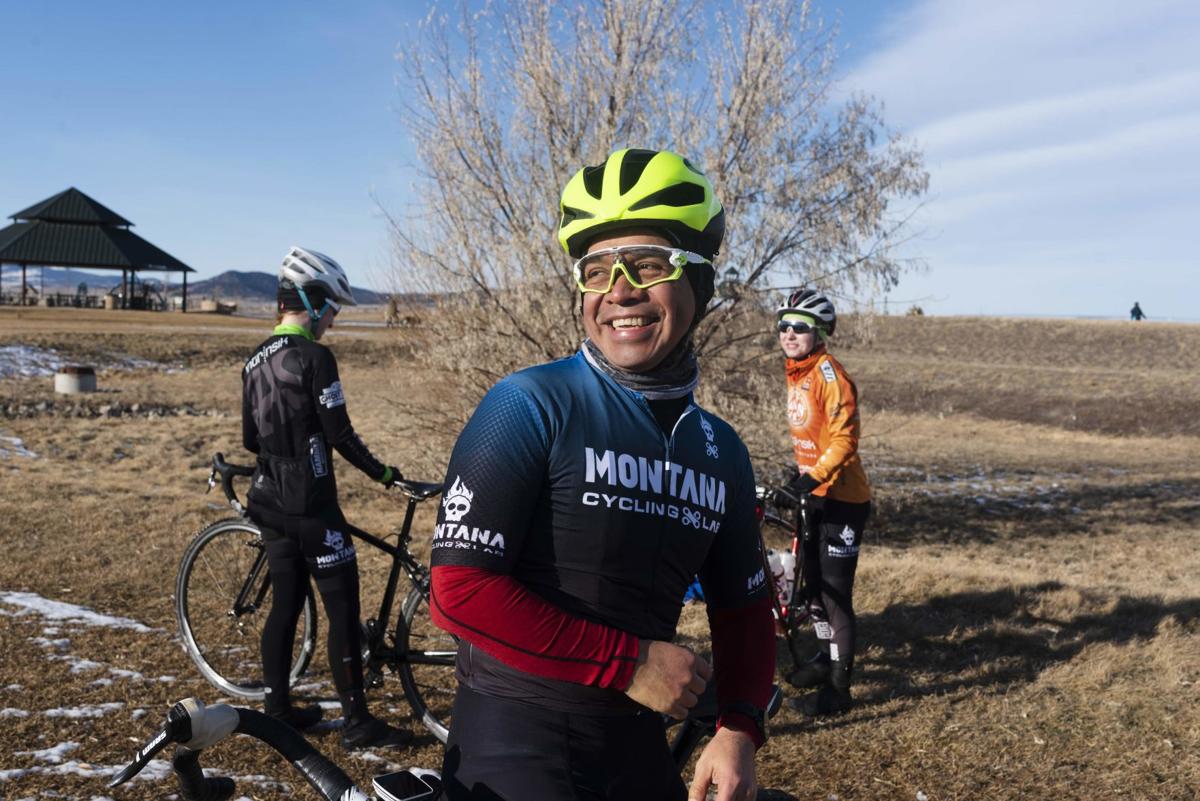 Jesus Salazar started Montana Cycling Lab, a local nonprofit, in May 2019 to help Helena teens get involved in the sport regardless of financial means. 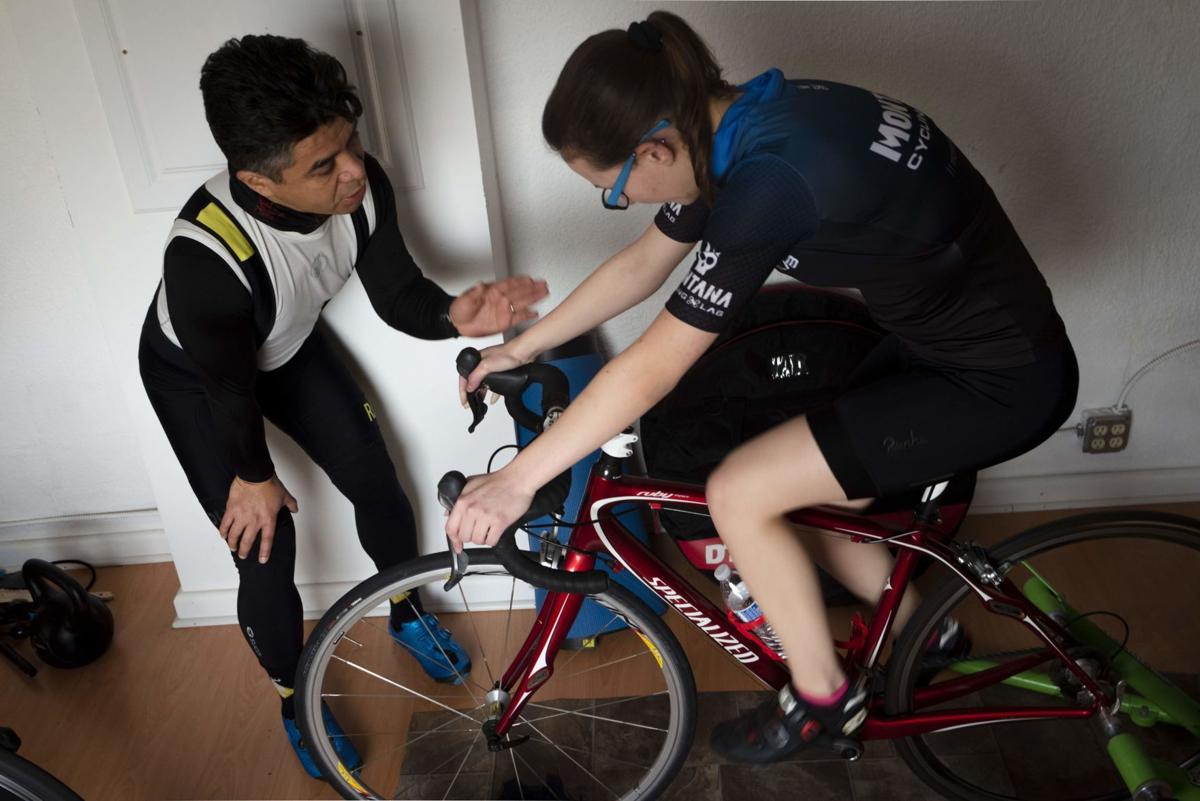 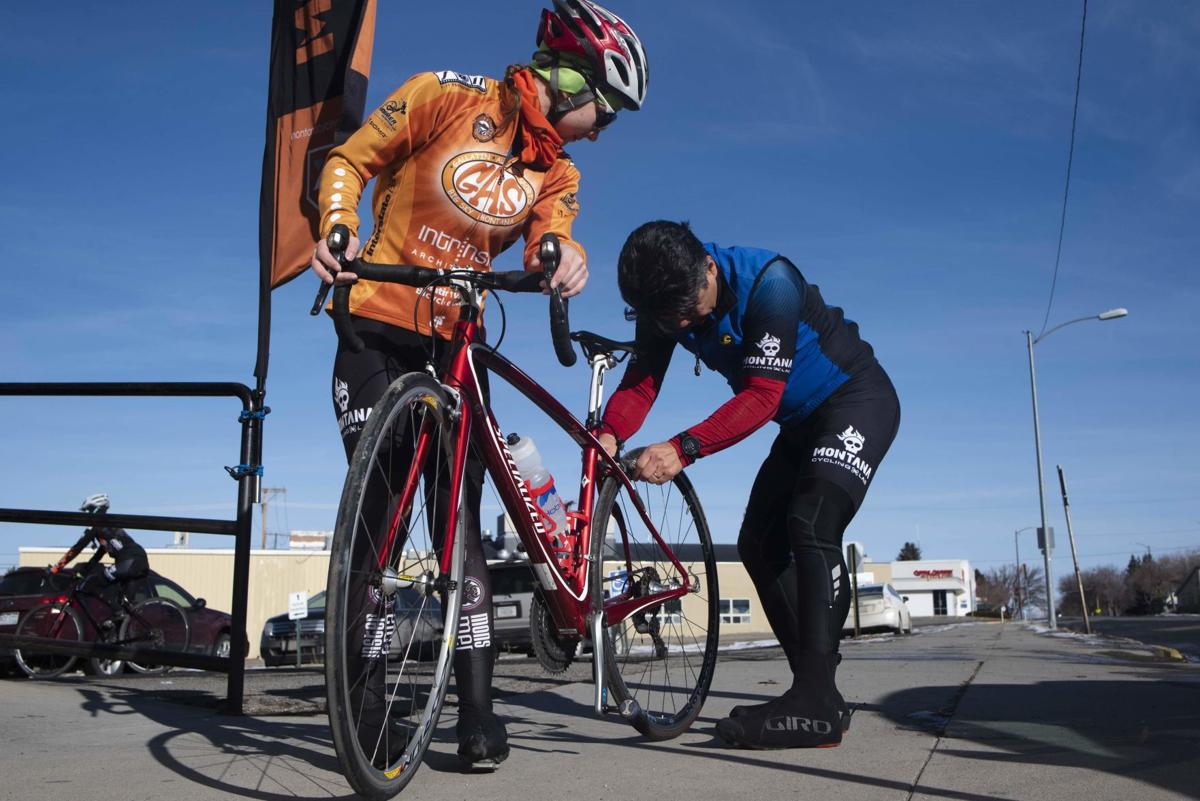 Jesus Salazar adjusts the brakes on Tricia Fulkerson's bike to prepare her for her first outdoor ride with Montana Cycling Lab. 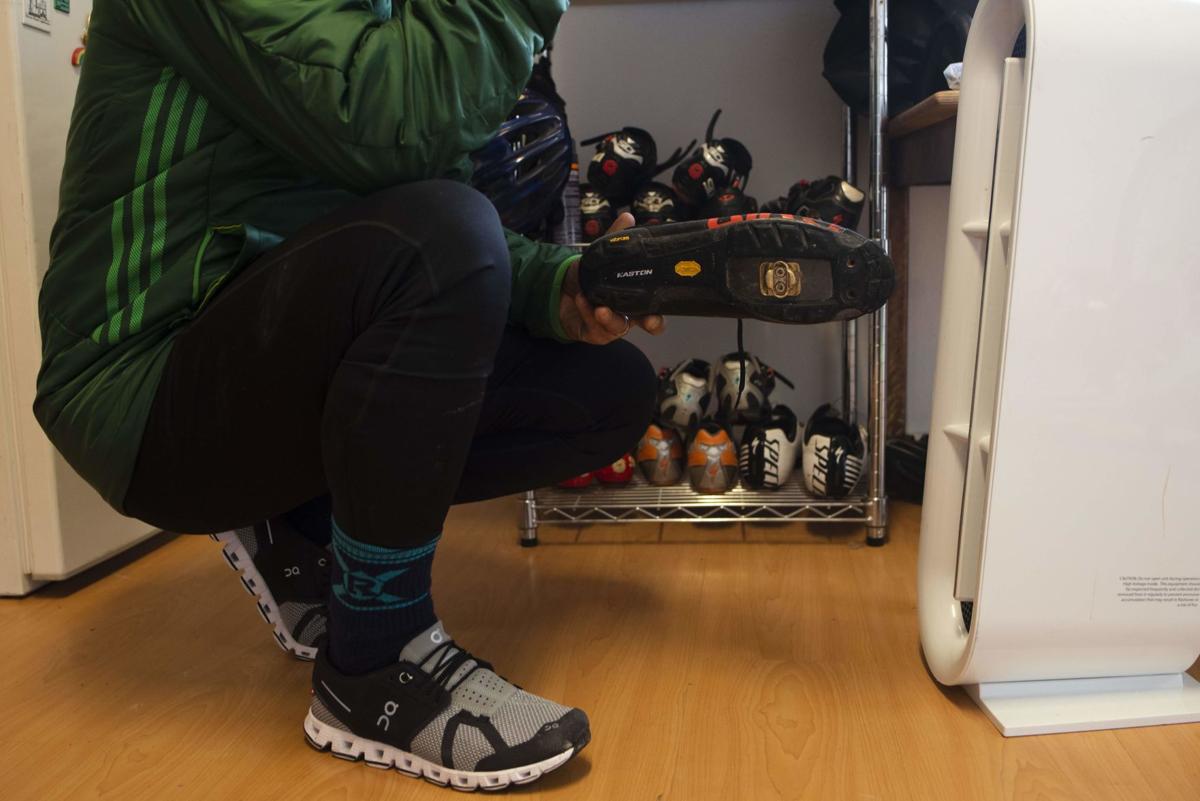 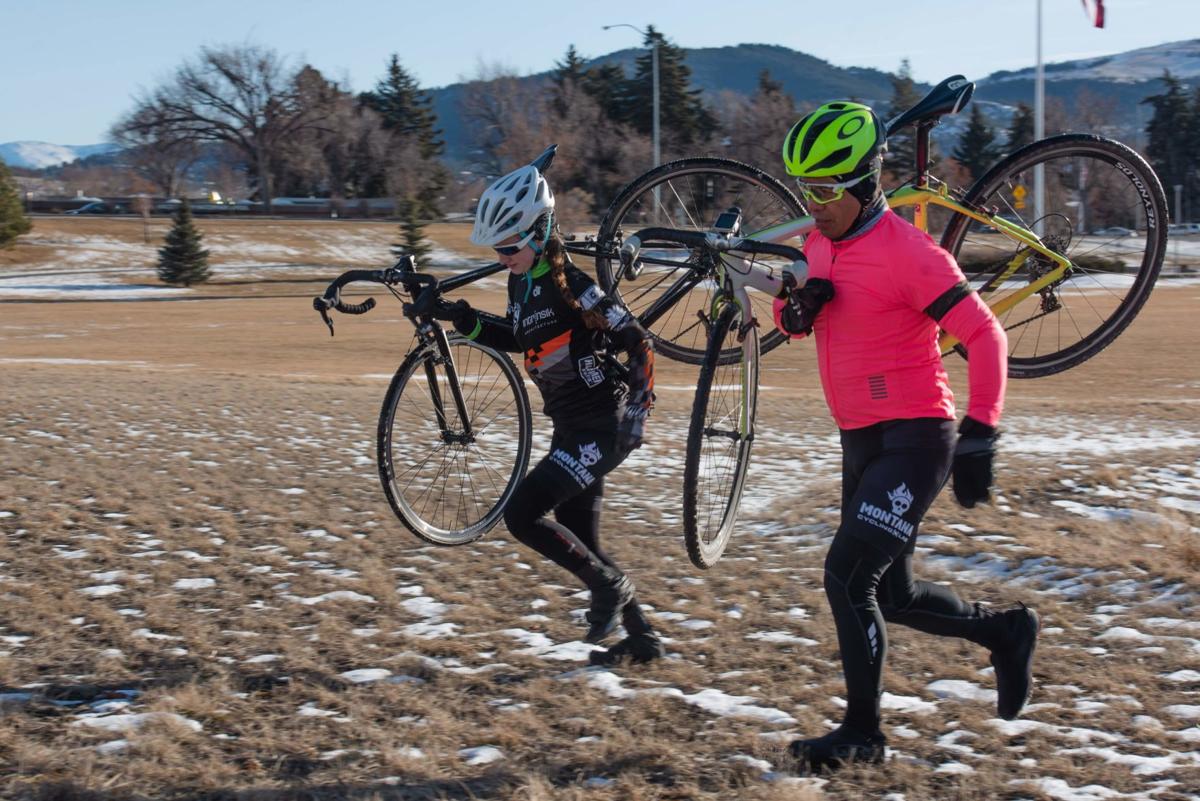 Chloe, 18, runs up a hill with her coach Jesus Salazar as he teaches her cyclocross technique. 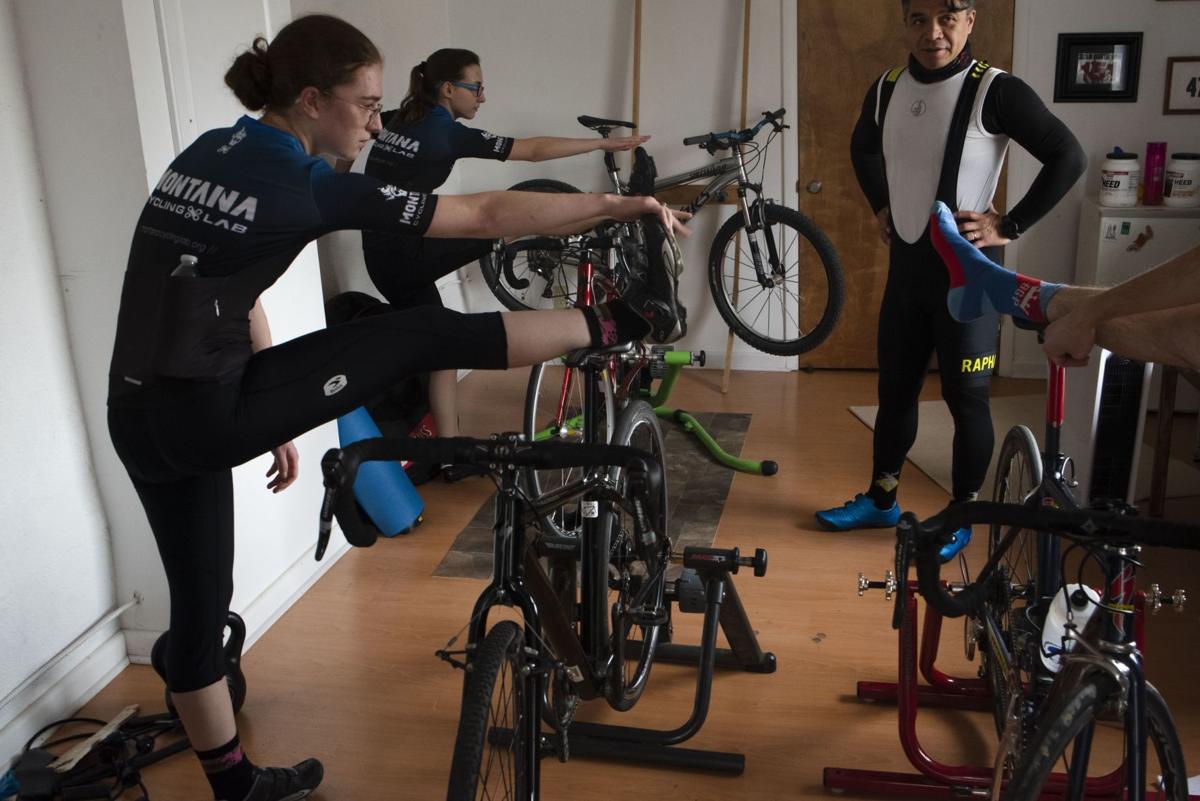 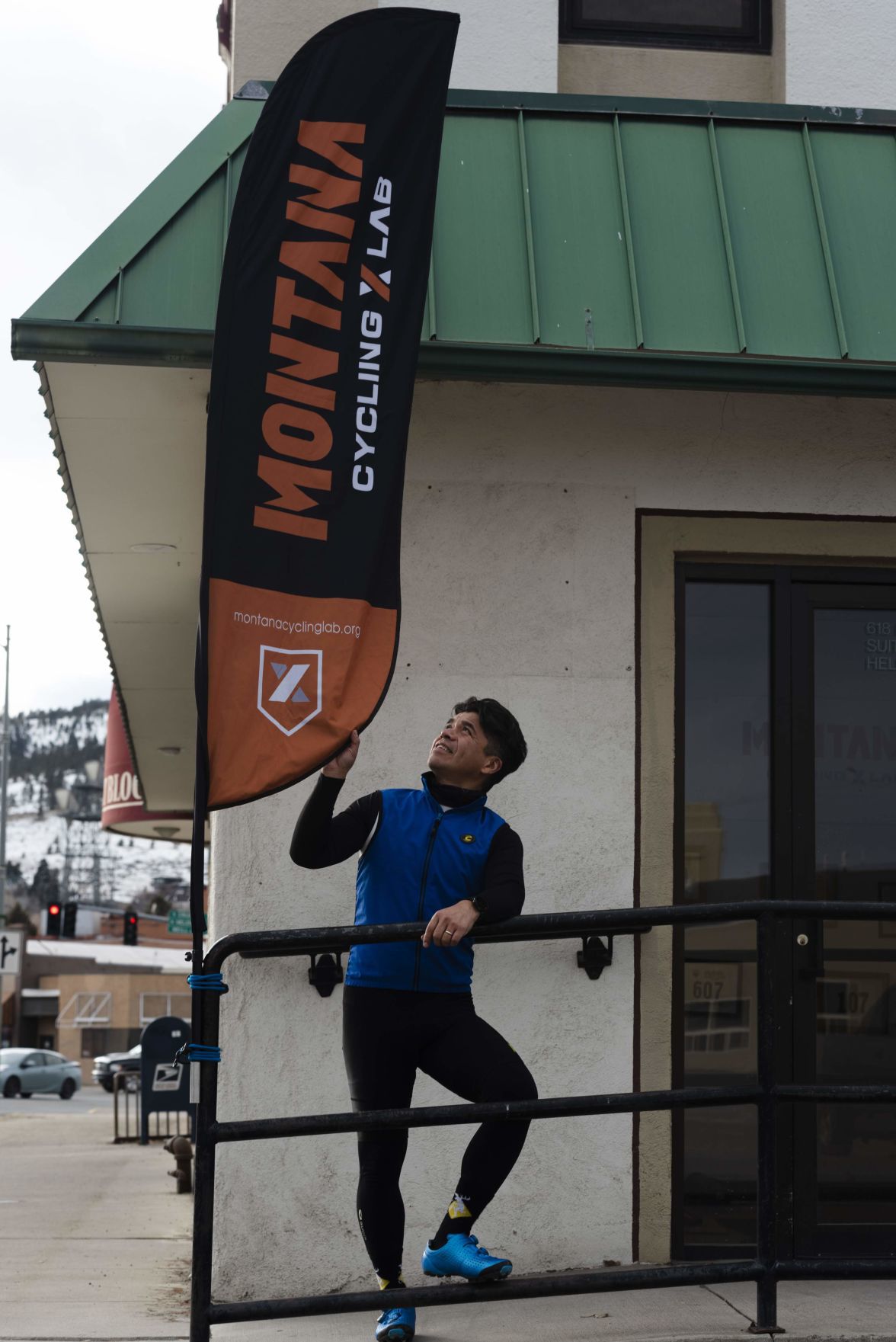 Jesus Salazar started Montana Cycling Lab, a local nonprofit, in May 2019 to help Helena youth get involved in the sport regardless of financial means. 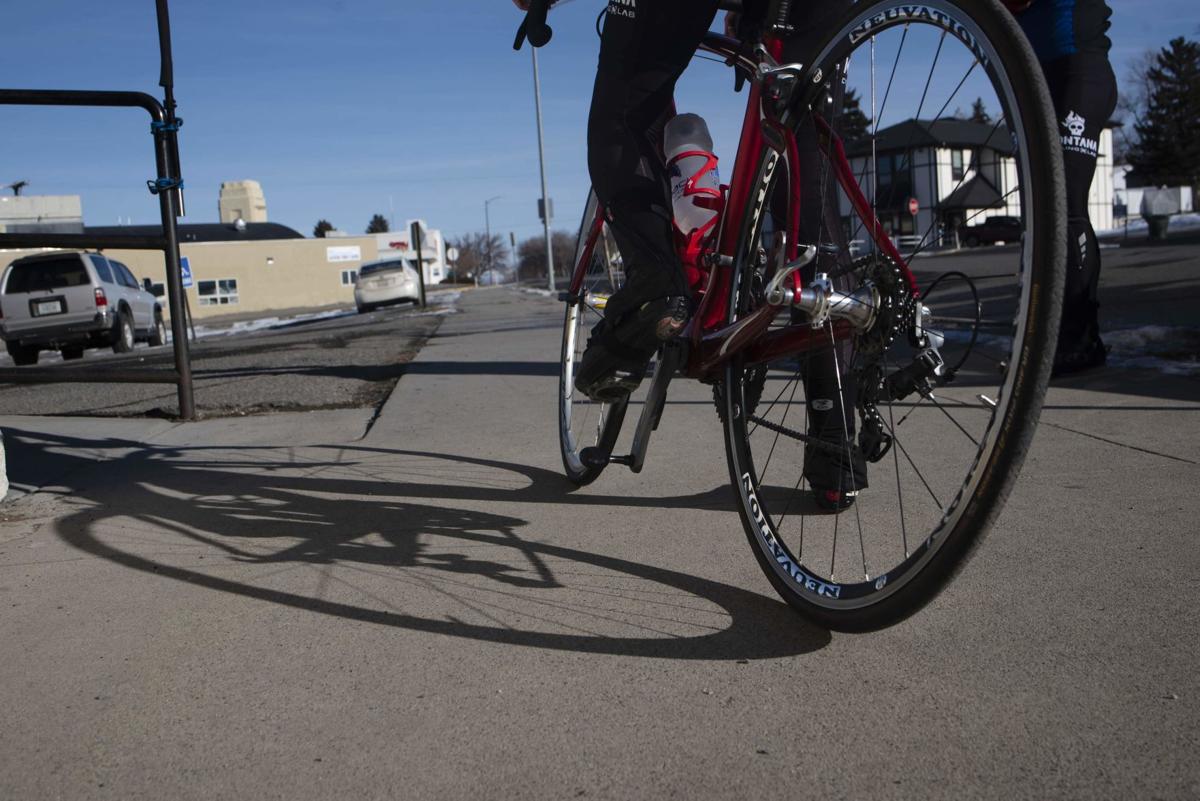 Tricia Fulkerson practices unclipping from her bike pedals on the sidewalk in front of Montana Cycling Lab. 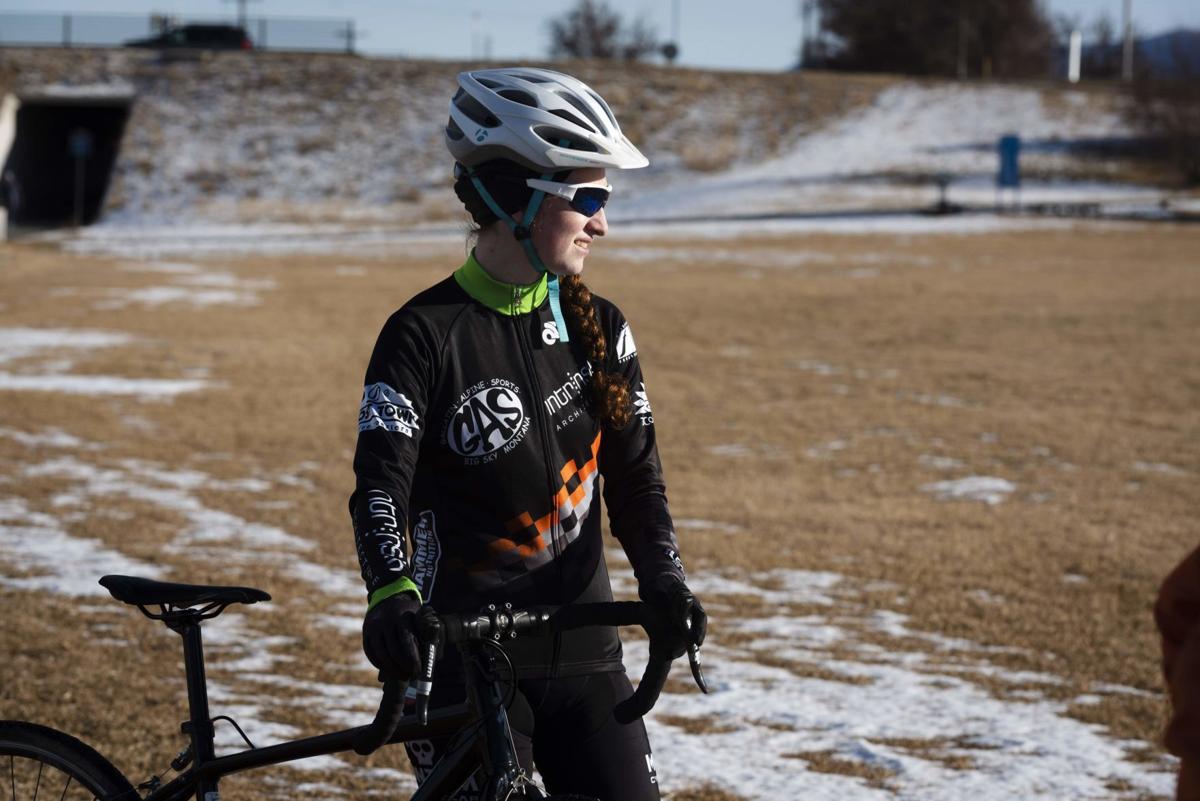 Chloe recovers after a training session.