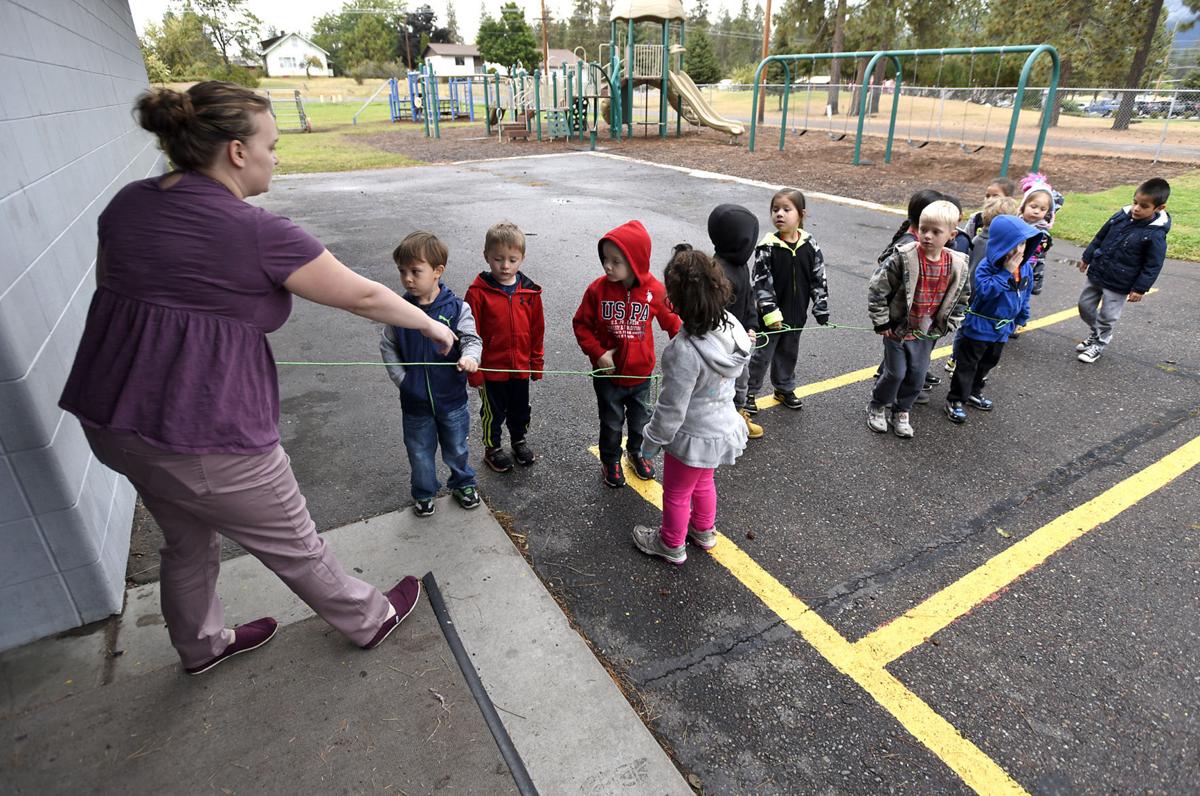 Jordan Bernhardt lines up her preschool students after some time on the playground to go back to their classroom at Pablo Elementary on Wednesday. Pablo Elementary's preschool is one of 17 created in the state by a pilot program funded by the Montana legislature earlier this year. 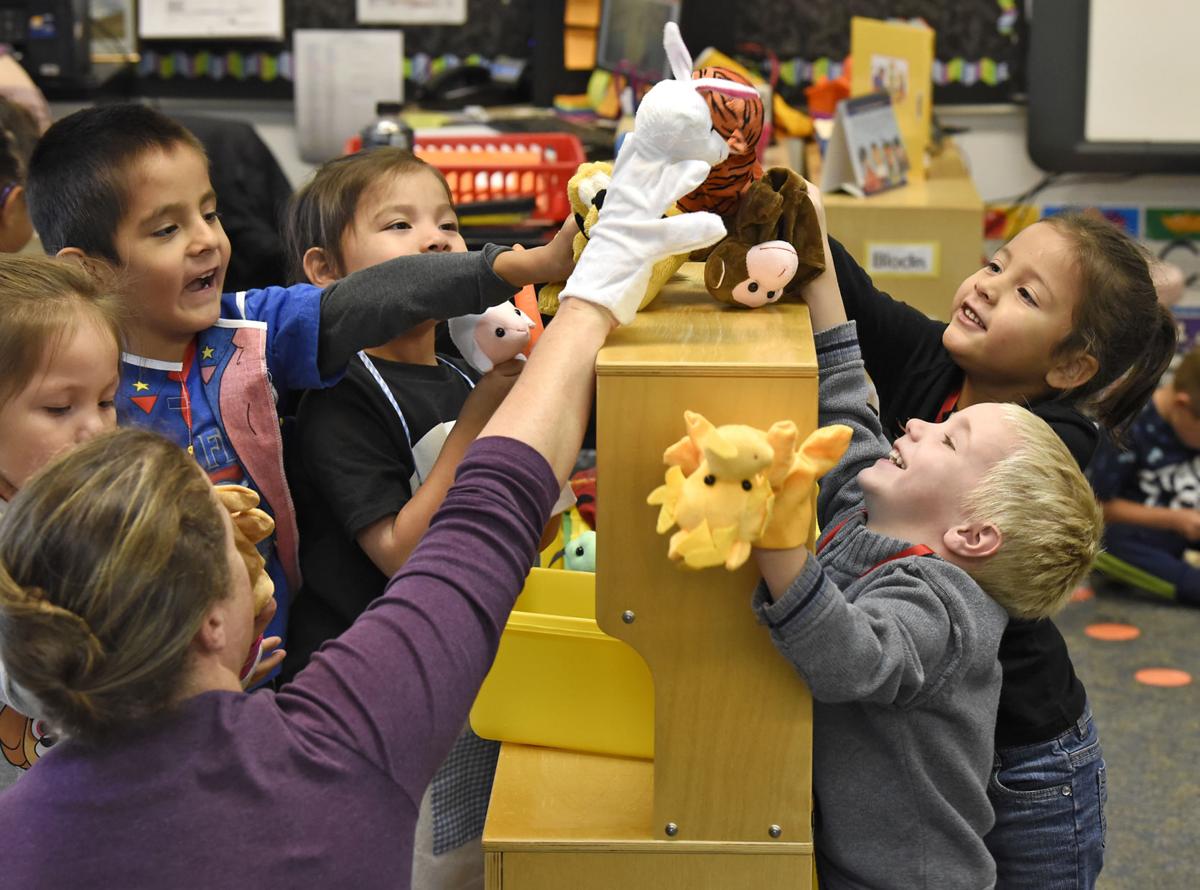 Pablo preschool students play with paraprofessional Katie Castor in the classroom on Wednesday. By the end of the year, the children should be able to write their names, grasp some basic concepts, be comfortable in a school setting and be able to share and empathize with one another. 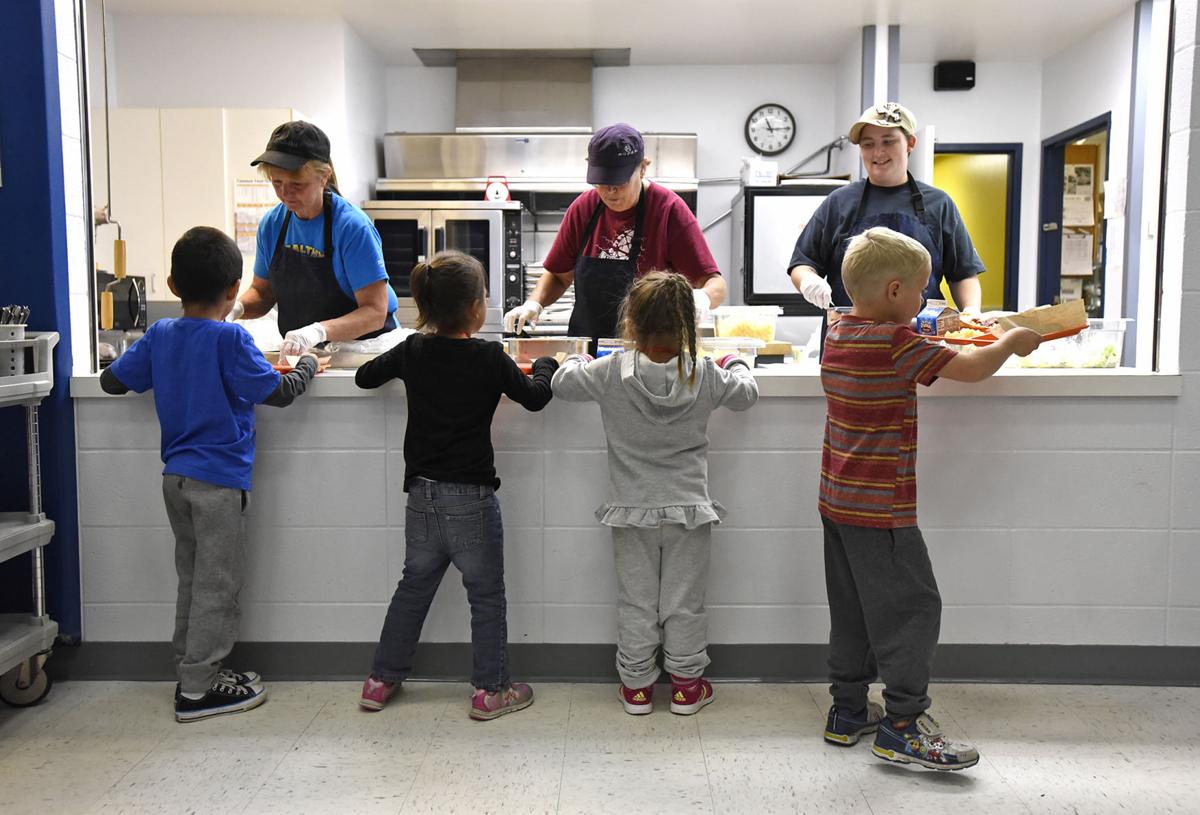 Pablo Elementary preschool students learn how to navigate the lunch line at the school kitchen on Wednesday. 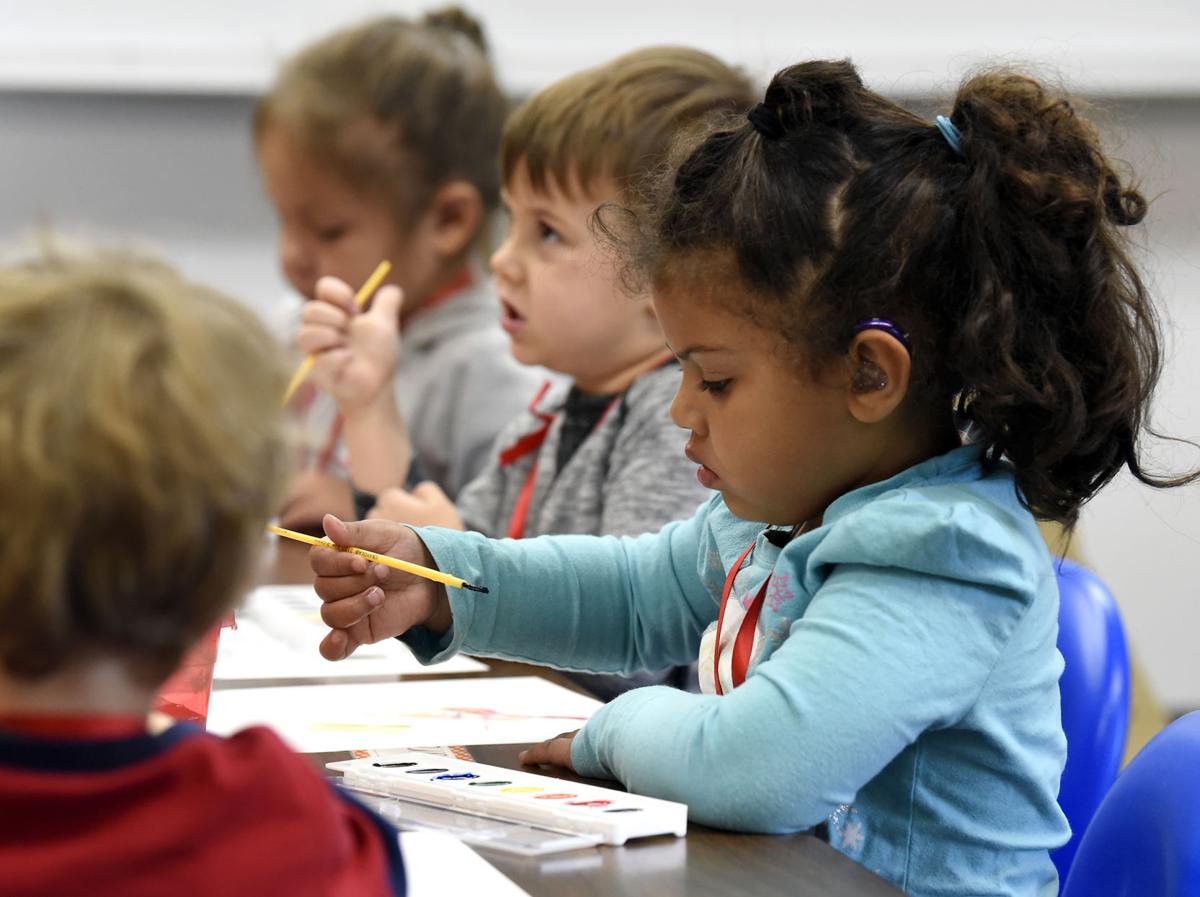 PABLO — Sleep was not an issue for Jordan Bernhardt after her first day on the job Tuesday as Pablo Elementary’s brand new preschool teacher.

“These kids have a lot of energy,” Bernhardt said right as she told her tiny students to catch a bubble in their mouth and hold it there as they navigated the hallway on their way outside for recess. “I was tired last night. I went to bed early.”

The bubbles burst once the fresh mountain air brushed against the children's faces. With the exuberance of youth, the 15 youngsters joyfully ran off to join the first graders already busy on swings, slides and other playground equipment.

Wednesday marked the second day that preschool classes returned to the small town of Pablo. Despite all the research that shows that getting disadvantaged children into a structured class setting early can make a huge difference in a child’s academic future, the school’s earlier preschool program had been the victim of budget cuts years ago.

This year, the Ronan School District was awarded two $150,000 STARS Preschool grants to serve children at elementary schools in both Ronan and Pablo. The funding for the two-year grants was included in legislation passed earlier this year by the Montana Legislature with bipartisan support and a major push by Gov. Steve Bullock.

The pilot preschool program created 17 preschools in 16 communities across the state. It is expected to serve more than 300 4- and 5-year-old children. Pablo’s class will top out at 18.

Ronan School District’s curriculum director Joan Graham said the need for a preschool class in the two communities has been evident for some time. In the district’s annual kindergarten roundups, where children are tested before starting school, the district found that many didn’t have the basic skills they would need to start learning.

“It was obvious that a lot of kids were spending all their time in front of a screen,” Graham said. “We know that kids that come into kindergarten without those skills start significantly behind their peers. It can take a lot for them to catch back up.”

While the Tribal Head Start programs do a good job on the Flathead Reservation, Graham said those programs have a waiting list. And many parents can’t afford to pay to send their kids to a preschool.

Pablo actually didn’t make the first cut in getting its own preschool program. The elementary school in Ronan was the only school in the district to be offered the grant initially, but something happened along the way.

“We’re not exactly sure what changed, but we received a call that a grant had become available to us,” Fisher said. “That was very good news.”

There’s no doubt the community of Pablo fits the criteria used in determining which schools receive the funding.

“They were looking for communities that are economically disadvantaged that had a diverse demographic,” Fisher said. “This community has also historically struggled academically. We have some very high needs. We were a really good fit for this program.”

Since Pablo received word a little later than the rest, its pre-school program didn’t start at the beginning of the school year.

There was a lot that needed to happen before the kids arrived.

Fortunately, the school had one unused room left, but before it could be filled with young students, the district had to acquire a curriculum, buy furniture and other school supplies and find the right teacher and para-professional to staff the classroom.

Bernhardt, a recent University of Montana graduate with a love for working with young children, originally had been hired as the aide for the new Ronan preschool. She and Katie Castor are spending the first few days in Pablo getting the children used to their new surroundings while slowly introducing them to some of the expectations of their first school experience.

By the end of the year, Bernhardt said the youngsters should know how to write their name and have a grasp on some other basic educational concepts. More importantly, her students will feel comfortable in a school setting when they enter kindergarten. They’ll understand what it means to share, to listen when a teacher is talking and to empathize with one another. And, they’ll know what it means to learn.

Children with quality early learning opportunities are more likely to read at grade level, graduate from high school and earn more money throughout their lifetimes. Research indicates that every $1 spent on high-quality preschool programs creates $7 in future savings to the communities and states that invest in them, according to a news release from Bullock’s office.

In Pablo, the benefits don’t stop with the children.

There are many single-parent families in the area, Fisher said. Some of those single parents are either working or trying to find a path for a better life through their own education at the Salish Kootenai College in Pablo.

The cost of day care can put an end to those dreams.

“It’s hard to hold down a job or go to college when you can’t afford day care,” Fisher said. “The parents that I met were very excited to know that we have this to offer now.”

Bernhardt understands first-hand the choices parents have to make when it comes time to decide between work and caring for a young child. It’s what brought her family to Polson.

When she and her husband had their first child, they quickly learned that it was going to cost them one of their incomes to pay for day care.

And so they did what many do.

They moved from Missoula to Polson, where Bernhardt’s mother lives, after she offered to care for their child.

“I wouldn’t have been able to work without that help,” she said.

Fisher hopes that the next Legislature will see the benefits of the preschool program and choose to set aside funding to expand it to other schools in the state.

“The expectations for our students continue to rise,” Fisher said. “Our kindergartners are expected now to be able to read when they complete that first year. This will go a long way in helping them to achieve that.”

Jordan Bernhardt lines up her preschool students after some time on the playground to go back to their classroom at Pablo Elementary on Wednesday. Pablo Elementary's preschool is one of 17 created in the state by a pilot program funded by the Montana legislature earlier this year.

Pablo preschool students play with paraprofessional Katie Castor in the classroom on Wednesday. By the end of the year, the children should be able to write their names, grasp some basic concepts, be comfortable in a school setting and be able to share and empathize with one another.

Pablo Elementary preschool students learn how to navigate the lunch line at the school kitchen on Wednesday.