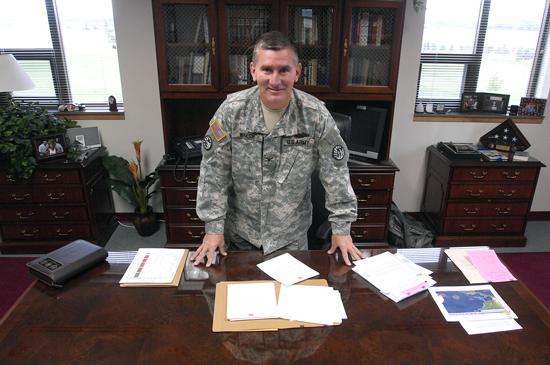 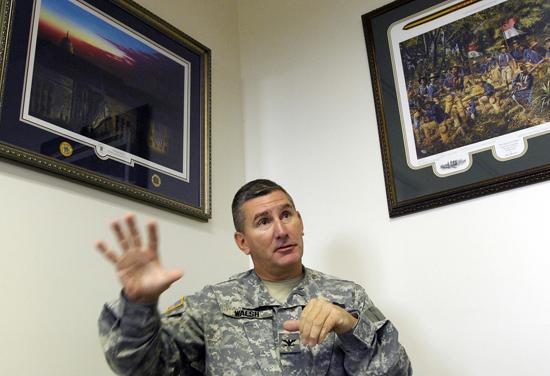 FORT HARRISON — A painting on the office wall recalls the day Lt. Gen. James Longstreet and Maj. Gen. George Pickett stood at Gettysburg in 1863, discussing the battle ahead.

The ensuing attack on Cemetery Ridge, known as Pickett’s Charge, was doomed from the start. By day’s end, thousands of men would be dead and the Confederacy would never fully recover from its loss.

That ill-fated plan, hatched 145 years ago, gives Brig. Gen. John Walsh a moment of pause as he prepares to take command of the Montana National Guard, assuming a role that will influence the lives of the men and women under his charge.

It’s a task the Iraq war veteran takes seriously; his own experience leading soldiers into battle is never far from his thoughts.

“When you’re in command, every time you send soldiers outside the wire, it weighs pretty heavy on you, knowing that people can get killed because of the decisions you make,” he said. “It’s amazing what our forefathers had to go through to give us the freedoms we have today.”

Walsh, 48, who takes command this Saturday, will become the third officer to carry the title of adjutant general of the Montana Guard since Sept. 11, 2001 — a day that reinstated the Guard’s dual role in supporting both federal and state missions.

Since then, more than half of the Guard’s forces have deployed to Iraq. At least four more units are currently gearing up for another round of deployments, slated to take place by January.

“I think what I bring to the table as the adjutant general is credibility,” Walsh said. “The soldiers understand that their leaders have done what we’re asking them to do.”

Walsh commanded the 1-163rd Infantry Battalion in Iraq. The 712 soldiers under his watch left Montana in July 2004 and returned nearly 18 months later in November 2005. Once in the theater of war, his task force swelled to nearly 900 men, becoming the largest in the 116th Combat Brigade.

“There’s no way as a leader you can be involved in all the planning and everything that goes on,” he said. “You have to rely heavily on the people you put in key positions. The one thing I tried to stress from day one was discipline.”

Walsh, a husband and father, inherits a Montana National Guard in transition. His predecessor, Maj. Gen. Randy Mosley, saw the Guard through its largest wartime deployment since 1941.

Mosley also pushed for changes in the Guard’s post-deployment atmosphere, placing the mental and physical care of his soldiers and their families at the forefront of consideration.

Walsh vowed to continue that effort. The Guard, he noted, can do a better job ensuring military families know what resources are available to them, while at the same time caring for the soldiers when they return from war.

With the war in Iraq possibly winding down and efforts in Afghanistan likely gearing up, Walsh understands the demands his soldiers may face in the coming years.

Recent changes passed down by the Department of Defense have limited deployments to 12 months. That, Walsh said, means Montana soldiers must train at home and stand ready to deploy when their orders arrive.

“We still have to accomplish the training, but now we’re going to conduct that training at home stations,” he said. “We have to ensure the training they receive at their home station is adequate before they deploy — not just adequate but outstanding.”

The pictures on Walsh’s office wall include the Pentagon on Sept. 12, 2001, the dawn after the terrorist attacks changed the national dialogue. Another frame, hanging nearby, includes photos from Walsh’s own tour in Iraq.

There, on Oct. 15, 2005, during the Iraqi election, Walsh and others were touring five cities to ensure the election process ran smoothly.

Between Multaqa and Ouja, the convoy hit an improvised explosive device. The blast opened a crater in the road and shattered the Humvee windows. Had the detonation occurred a second later, the outcome, Walsh said, could have been far different.

Walsh’s progression from Iraq war commander to adjutant general finds its roots in 1979 when he joined the Montana National Guard after graduating from Butte High School. He attended Carroll College and, in 1984, began Officer Candidate School.

He was married in 1985 and accepted his commission in 1987, working as the plans, operations and training director for the Montana Guard. During the fires of 2000, he served as the military support officer, overseeing one of the largest deployments of state soldiers in response to a Montana natural disaster.

Walsh’s experience both overseas and at home makes him a strong believer in improving the Guard’s response capabilities and maintaining strong ties with the state’s media.

Among his goals, he said, is to build stronger relationships with civil authorities across the state. He also seeks to improve the Guard’s infrastructure and help Fort Harrison grow as a national training center, particularly in the way of training special forces and combat medics.

“We’re doing a lot to improve the infrastructure here at Fort Harrison so that it draws units from outside of Montana to train,” he said. “We’re already one of the regional training areas for combat medics. We’re trying to go after the national ranking so we become the national host for training combat medics.”

Drawing training to Fort Harrison, he said, would have positive economic impacts on the state and help the Montana Guard secure more resources.

“When you start training 15 to 20 classes a year with 30 to 50 people, it brings in the resources that come along with that,” he said. “It’s a boost to the Montana economy.”

The ceremony will take place beginning at noon on the parade field at the Helena Armed Forces Reserve Center at Fort Harrison.

The public is invited to attend.

The ceremony will include static displays of military equipment, an obstacle course and assorted items from the Recruiting and Retention Command as well as an F-15 and helicopter fly-over during the procession.

In addition, the Montana National Guard Honor Guard and 89th Ceremonial Cavalry will present the colors.

Gov. Brian Schweitzer will be the keynote speaker, and the ceremony will be conducted by outgoing Montana adjutant general Maj. Gen. Randy Mosley.

It’s official, Montana is attempting to nullify portions of the private contract that has governed Colstrip Power Plant for 40 years.

Smoke from a controlled burn along Interstate 15 in northern Montana obscured the vision of drivers, leading to a chain reaction crash that killed two people and injured four others.