The lawsuit, recently filed with the aid of environmental legal groups, was brought by the 16 youth mostly through their parents and guardians in Lewis and Clark County District Court. Citing climate science predicting harmful effects of climate change, they ask the court to find that the state’s energy plan and one of the primary environmental laws, the Montana Environmental Policy Act, violate the Montana Constitution. 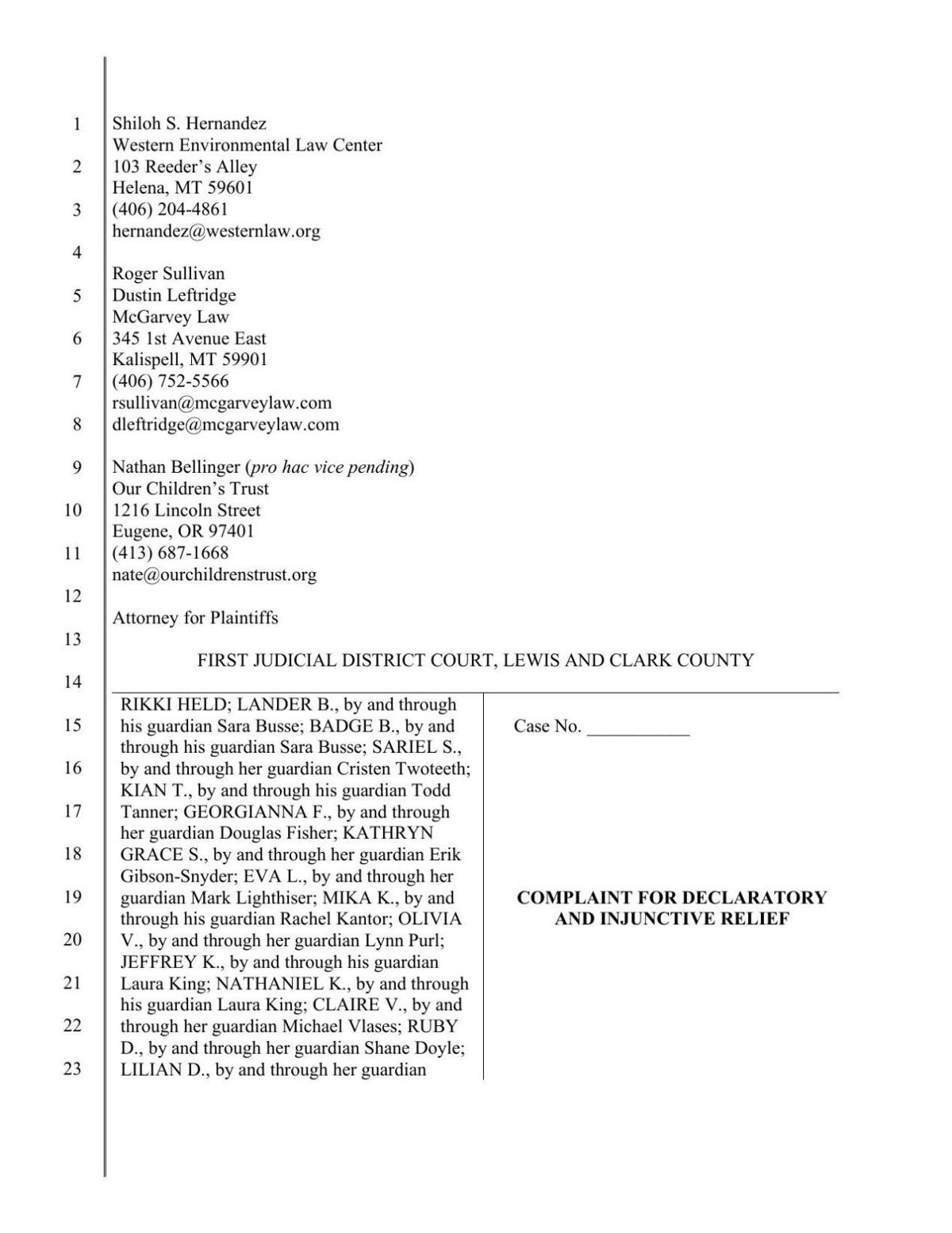 State agencies, Gov. Steve Bullock and the Montana Public Service Commission are named as defendants in the case.

“Although Defendants know that Youth Plaintiffs are living under dangerous climatic conditions that create an unreasonable risk of harm, they continue to act affirmatively to exacerbate the climate crisis,” the lawsuit says. “Youth Plaintiffs, most of whom cannot vote, therefore seek this Court’s judgment and redress.”

The lawsuit claims that Montana’s energy policy’s reliance on fossil fuels and related climate impacts run counter to the constitutional guarantee to a clean and healthful environment. It further claims that MEPA, which dictates that the state first analyze the environmental impacts of its decisions, also contains an unconstitutional provision. The provision excludes the state from considering environmental impacts beyond its borders, which Shiloh Hernandez, attorney with the Western Environmental Law Center, says has been used to exclude consideration of climate science.

“The goal of this lawsuit is to make the state of Montana part of the solution to climate change rather than part of the problem that is the climate crisis,” he said.

Hernandez and the 16 youths, who range in age from 2 to 18, are asking the court to direct the state to develop a new energy plan that reduces greenhouse gas emissions and the effects of climate change.

“We are saying to state agencies and the defendants to come up with a plan that’s scientifically justifiable, that’s in-line with the scientific consensus,” he said. “We’re not asking the court to shut everything down.”

Hernandez noted that a fossil fuel transition would generate jobs while also helping the environment. The youth plaintiffs are uniquely vulnerable to climate change, he believes, due to the increasing impacts and because they are still developing physically, making them particularly susceptible to maladies such as wildfire smoke. Hernandez called it a “cheap shot” to say the youths are plaintiffs for publicity reasons.

“To say they’re being used is insulting to the children – I think they’re tremendously courageous,” he said.

Along with the Western Environmental Law Center, the nonprofit law firm Our Children’s Trust as well as the McGarvey Law office in Kalispell are the attorneys bringing the case. The trust has been involved in a number of lawsuits nationally over climate issues, including a 2011 case involving youth plaintiffs before the Montana Supreme Court. In that case, the court found the case should have been brought at the district court level.

In 2015 the trust also brought a federal case on behalf of youth plaintiffs. That case was dismissed by the Ninth Circuit Court of Appeals. Hernandez noted that the decision found that the children did not have standing to bring the case but did not rule on the merits. International courts have also ruled in favor of addressing climate change, he said, citing a case in Holland in which the court ordered that country to cut its emissions beyond government proposals.

Hernandez believes Montana’s unique clean and healthful environment provision and protections for minors make a compelling case for the district court to consider.

“Here in Montana the state is doing nothing – it’s actively promoting fossil fuels which is the source of the problem of climate change.”

A request for comment from Bullock’s office was referred to the Montana Department of Justice, which would litigate the case.

A DOJ spokesman confirmed the department had been served with the lawsuit but declined to comment further.

Bullock’s office did not respond to a follow-up question asking whether the governor believes the state is doing enough to address climate change.

Hernandez credited Bullock for initiatives that include “talking about the problem” of climate change, but said greenhouse gas emissions continue to increase. He believes the blame is shared among state agencies including the PSC and requires a "systematic solution."

"We’re hoping this thing will take its toll, we’ll get through it and get back on the water.”

Outdoor recreation is exempt from Montana's stay-home order, but don't go too far

Passenger traffic at the Helena Regional Airport has dropped off significantly in the last week due to concerns about the novel coronavirus, a…

It came down to the wire for Helena resident Ryan Eggensperger on "The Price Is Right" Monday, but he managed to bid and spin his way to victo…

Helena Public Schools officials are considering some changes to the way students are graded now that their education is being delivered online.

The Ninth Circuit Court of Appeals ruled that the Forest Service complied with environmental laws when it approved the Johnny Crow Wildlife Habitat Improvement Project near Townsend and the Moose Creek Vegetation Project near White Sulphur Springs.

Penned up by the pandemic, Montanans try to get well by getting out

That the public is increasingly turning to open spaces in this time of crisis is abundantly clear.