Montana is, in fact, a country for old men, and women too, according to demographic statistics from the U.S. Census Bureau, which indicate that based on median age, Montana holds the distinction of grayest state in the west.

And certain stretches of the state — including many but not all rural counties — have considerably older residents than Montana as a whole. That state of demographic affairs has wide-ranging implications for regional economies, education systems, and health-care access.

“We’ve got this Baby Boomer bulge that’s pushing into retirement as we speak,” said University of Montana Bureau of Business and Economic Research economist Pat Barkey. Aging demographics are also driven by national trends toward smaller families and longer life expectancies, he said.

The median Montanan, according to the Census figures, is 39.8 years old — two years older than the national number, 37.8, and further into middle age than the median resident of any of the 10 other states in the continental western U.S.

Those statistics and others in this piece come from U.S. Census American Community Survey data, representing a five-year average from 2013 to 2017. The margin of error associated with ACS figures means they can be somewhat imprecise, especially for low-population, rural counties where federal statisticians survey relatively few people.

An aging population creates a number of challenges for Montana. Business leaders and economists, for example, worry that an older population means fewer potential employees to staff Montana businesses. While tight labor markets can drive wages up as companies compete for a limited number of workers, they can also stifle economic growth when businesses hold off on expanding because managers are uncertain about being able to fill new positions.

“Any individual company can find good workers, but in aggregate there are fewer of those (workers),” Barkey said. “It’s always good to have more jobs than people, but it’s still a problem.”

Barkey also said that aging demographics can influence how much revenue government is able to collect from various taxes, since older taxpayers “tend to be property rich and income poor.”

Additionally, having fewer family-age residents in rural communities can starve schools of enrollment. And older residents are likely to need more medical attention as they age, a particular challenge in isolated communities, where traveling to a major hospital can require a multi-hour round-trip.

In terms of age distribution, Montana’s population includes more residents in their 50s and 60s relative to the U.S. as a whole, and fewer under the half-century mark. For example, 13% of Montanans are in their 60s, compared to 11% of Americans nationwide. If Montana’s population mirrored national age distribution, the state would have 32,000 fewer residents in their 60s and 70s, and 14,400 more in their 20s and 30s.

The statewide age gap is relatively modest, however, compared to the demographic distributions in many rural Montana counties. 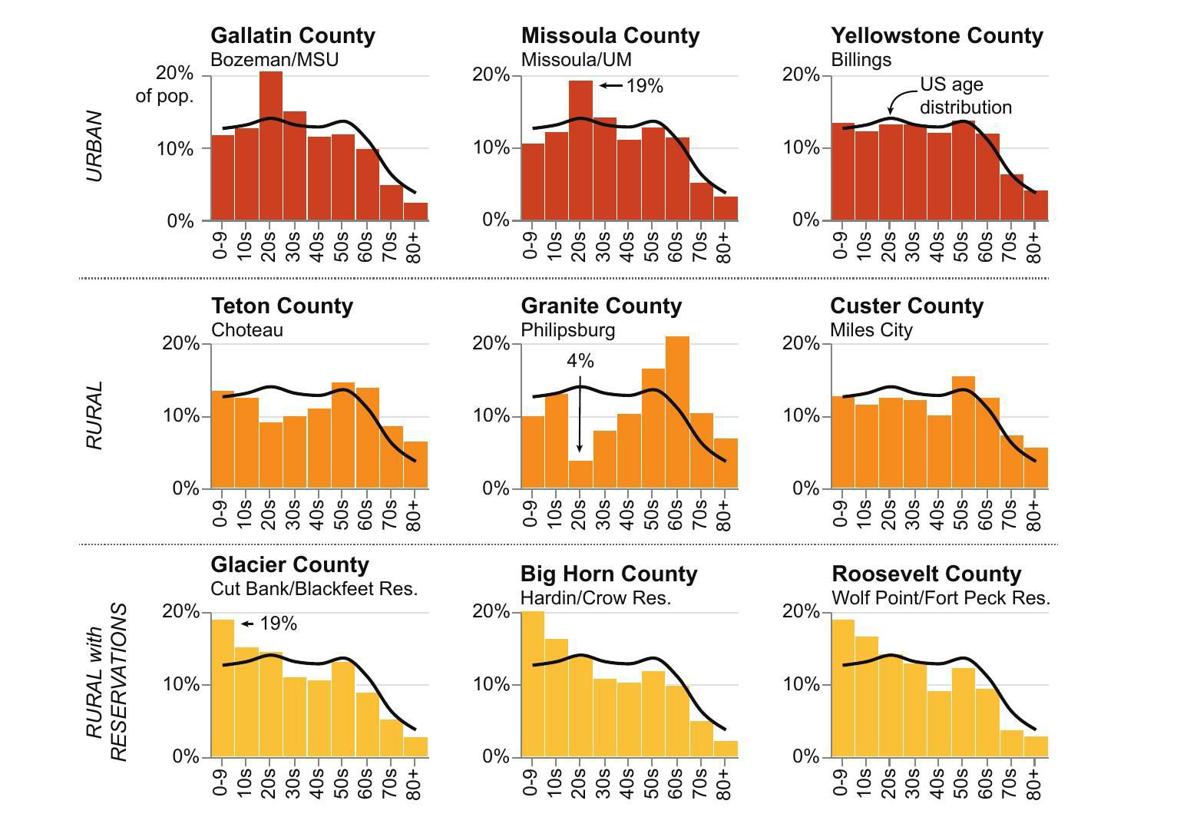 Missoula and Bozeman, with their flagship state universities and high rates of in-migration, are home to a disproportionate share of twenty-something residents by national standards: 19% and 21% of their populations, respectively, compared to 14% nationally.

Counties that overlap with American Indian reservations are the exception, generally hosting demographics with more children. In Glacier County, which spans Cut Bank and most of the Blackfeet Reservation, almost 19% of residents are under 10. Nationally, the figure is 13%.

The median age in Granite County is 53.1, making it the second-grayest county in the state, after Golden Valley County. Gallatin County, encompassing Bozeman, has a fresh-faced median age of 33.4, but is still older than a trio of reservation counties: Glacier, Roosevelt, and Big Horn. Roosevelt and Big Horn are in a statistical tie for youngest county in the state, with their median ages estimated by the Census Bureau at roughly 30.

This story is published by Montana Free Press as part of the Long Streets Project. This work is supported in part by a grant from the Greater Montana Foundation, which encourages communication on issues, trends, and values of importance to Montanans. Reach Lead Reporter Eric Dietrich at edietrich@mtfp.org.

There aren’t too many businesses adding jobs amid the rural fields of north-central Montana these days, but Big Sandy Organics is doing just that.

Housing costs have risen across Montana in recent decades, to the point where residents are feeling the pinch between wages and their rent or …

Air access is a big deal for rural Montana economies. Here’s how far small-town residents have to go.

When Lana Zellner and her husband — an architect and a software developer, respectively — moved to Philipsburg from New York City five years a…

The Montana Code School says it can train Montanans for coding jobs in 12 weeks. What then?

MISSOULA -- Hunched over MacBooks in a cluttered room inside a low-slung Missoula office building, two young women are trying to make their app work.

The Census will increase the pay for temporary field workers it plans to hire in Montana, paying $17-$19.50 an hour for the people that will go door to door.