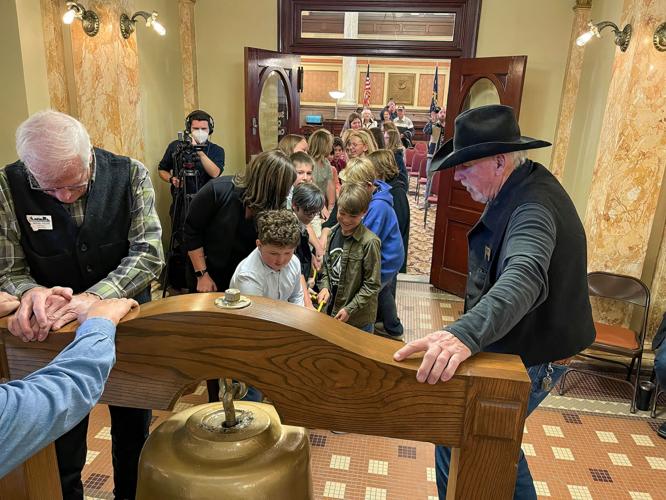 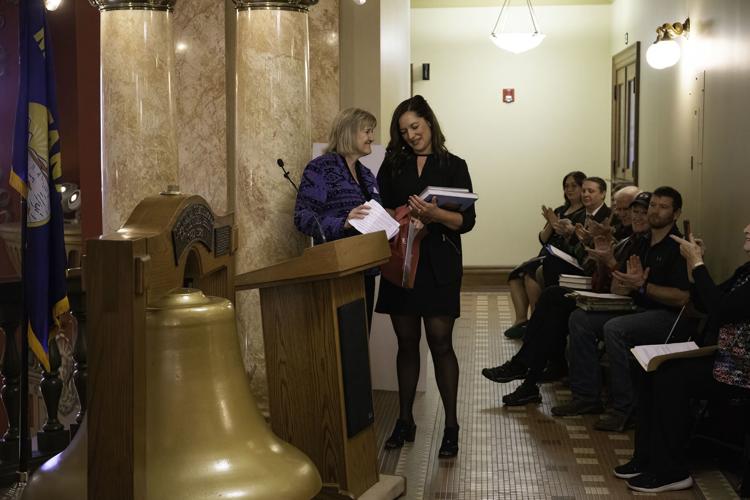 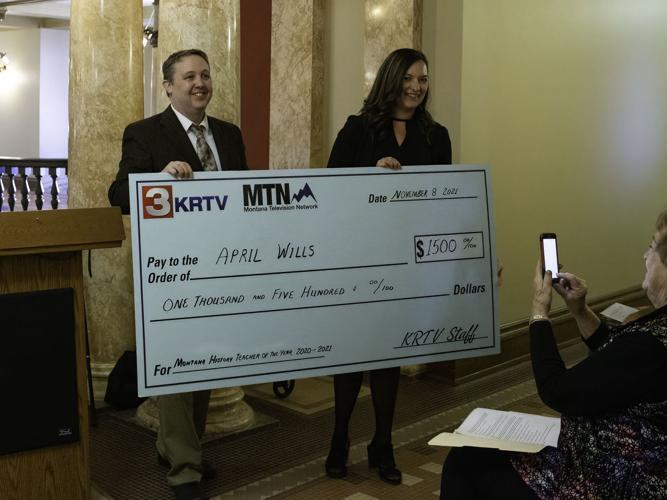 Montana Television Network presented Bainville teacher April Wills, right, with a $1,500 check as part of her selection as the Montana Historical Society's Montana History Teacher of the Year. 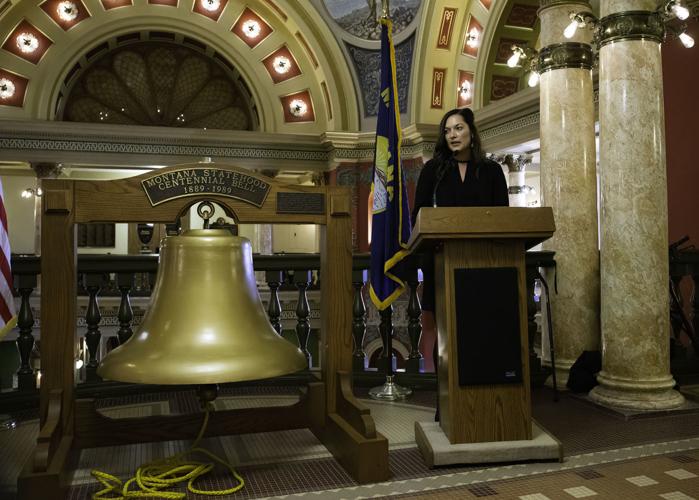 Every year on Nov. 8 at exactly 10:40 a.m., the Centennial Bell housed in the Montana Capitol building rotunda is rung by special guests to commemorate the Treasure State's statehood.

This year's special guests were Bainville Public School teacher April Wills and some of her fifth and sixth grade students.

Wills received the Montana Historical Society's 2021 Montana History Teacher of the Year award. She and her students made the long trek from Bainville to help ring in Statehood Day.

Wills is a native of Columbus who graduated from Broadwater High School in Townsend. She received her elementary education degree from the University of Montana in Missoula and her master’s degree in learning and technology from Western Governors University.

"To those who know her, it's no surprise April Wills won this award," Rasmussen said. "She loves awakening an appreciation of Montana in her students."

Wills called the award an honor and said as a small town elementary teacher, she never had designs of winning such an award.

"I'm very appreciative of this opportunity," she said, encouraging fellow small town teachers to continue putting in the long hours and hard work to help educate the state's youth. "I'd like to thank all the teachers that are all in this with me. ... I see you."

For Wills, the job of instilling curiosity about their heritage has long been a passion, one she hopes to continue long into the future.

"I will always be there to encourage you to be lifelong learners," she said, directly addressing her students and challenging them to bring their unique perspectives to their future endeavors.

"She does not keep her passion for Montana history to herself," Keefner said.

The award was established in 1990, and this year it came along with three $1,500 checks totaling $4,500 from each of the event’s three main sponsors: the Montana Television Network, the Montana History Foundation and the Sons and Daughters of Montana Pioneers.

The Montana Historical Society funded the bus trip from Bainville.

"This is such a great way to celebrate Montana becoming the 41st state," Montana Historical Society Director Molly Kruckenberg said. "The role we share in making our history accessible has an enormous impact on our future."

Knudsen said he was among the first kindergartners to attend classes at the then new school in Bainville in 1987.

"It is a real treat for me to have locals come all the way to Helena for such a special award," he said, congratulating Wills.

Gov. Greg Gianforte also congratulated Wills. Gianforte said his daughter just became a teacher, so he knows firsthand how important the work is.

"Not only does your work have a lasting impact in the lives of your students, but it imparts in them an understanding and appreciation of our state's history," he said. "Our shared history is what binds us together as Montanans, and it couldn't be more important to preserve. Preserving and learning from that history helps our state meet the challenges of today and build a strong, more prosperous tomorrow."

The Centennial Bell was placed in the Capitol building in front of the Senate by an act of the state Legislature in 1989. It is rung every Nov. 8 to commemorate President Benjamin Harrison's declaration of statehood for Montana on that day in 1889. Montana was the 41st state inducted into the union.

Editor's note - This story has been updated to correct information about the entities that donated funds to the winner of the Montana History Teacher of the Year award.

Not long after Tony Wilson and Steve Faherty purchased their historic Holter Street duplex in 2010, the amateur historic preservationists said…

Its outward appearance fails to convey its one-time importance to East Helena, but the nearly 500-square-foot Northern Pacific Railway depot, …

An investment in the past: Lewis and Clark County funds historical preservation effort

Lewis and Clark County has no dedicated space to store and display its historical artifacts and reams of documents, some dating back to territ…

Due to a staffing shortage, Helena is suspending the two fixed routes of its Capital Transit services this week.

Helena's Department of Parks, Recreation and Open Lands is wrapping up construction of a controversial Americans with Disabilities Act-complia…

Five recent gifts totaling $525,000 are helping the Montana Historical Society reach its private fundraising goal for construction of the Mont… 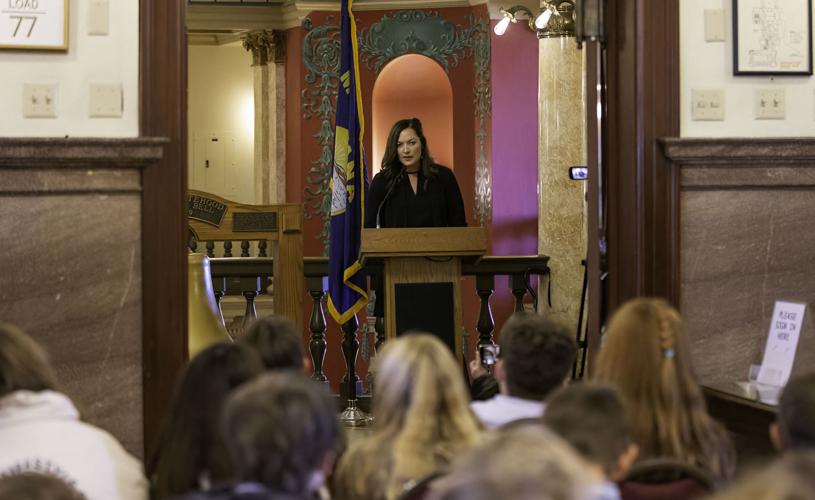 April Wills, the Bainville teacher selected as the Montana Historical Society's Montana History Teacher of the Year for 2021, spoke directly to her students who made the trip to Helena with her to attend Monday's ceremony.

Montana Television Network presented Bainville teacher April Wills, right, with a $1,500 check as part of her selection as the Montana Historical Society's Montana History Teacher of the Year.