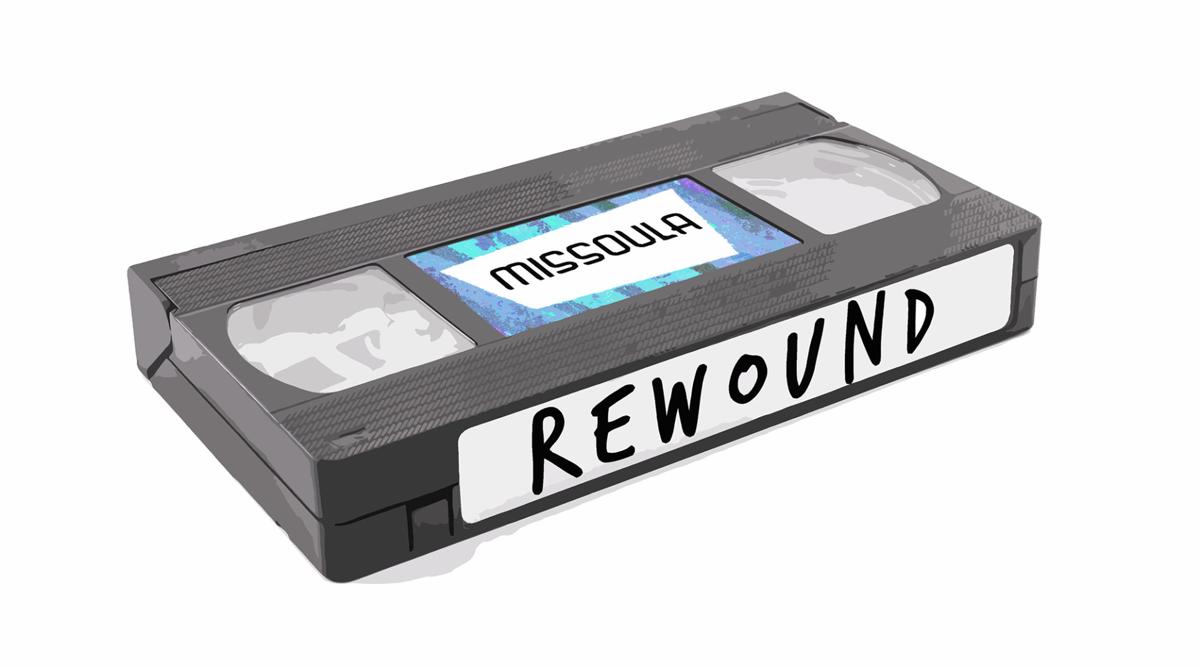 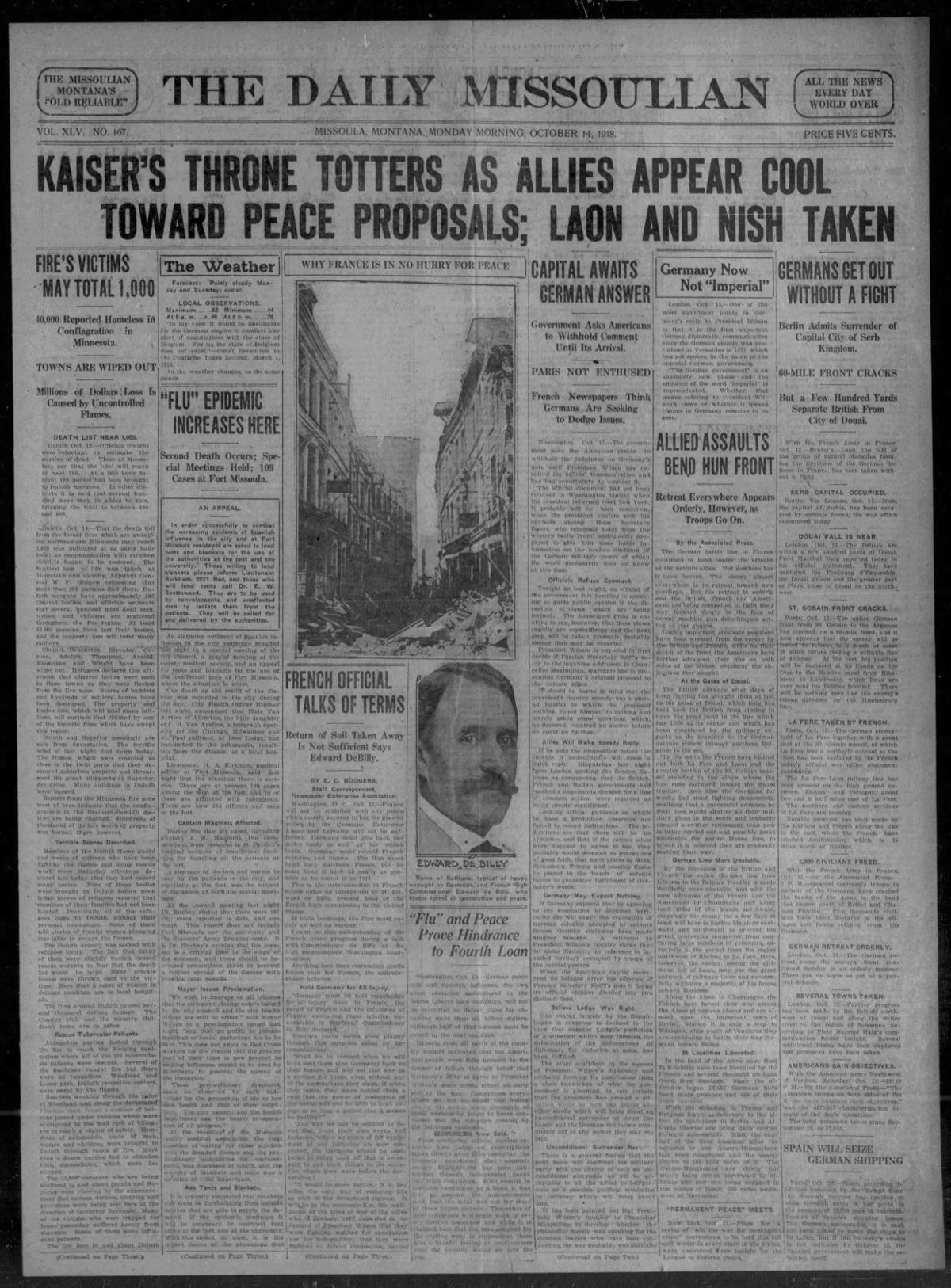 Just as with Week One, the next seven days of October 1918 began on an ominous note in Missoula.

War news out of Europe was encouraging, but 25 cases of the deadly Spanish influenza that was ravaging the nation were confirmed among soldiers at Fort Missoula on Monday, Oct. 7.

The next morning the City Council met and, according to the Missoulian, “A decision was rendered to close all schools, theaters, churches, and all places of public meeting” should the pandemic reach here.

“Despite the fact that those cases of Spanish influenza which have appeared in the city are all mild ones, and, in the words of a prominent Missoula physician, ‘the scare is out of all proportion to the present danger’ of an epidemic, Missoula yesterday took drastic steps to prevent one here,” the Missoulian reported on Oct. 10. “Given carte blanche by the members of the city council, Dr. J.P. Ritchey, city health officer, ordered all the schools, theaters, churches and other places of public assemblage in the city closed until further notice.”

Ira Fee, Missoula’s superintendent of schools since September, and Principal Gil Ketcham immediately shut down the schools. Rev. J.J. Hutchison, speaking for the Protestant churches, and Rev. Joseph Stack of St. Francis Xavier’s Roman Catholic church, announced that no churches would be opened for services until further notice. Both declared themselves in “thorough accord” with the city’s actions, the Missoulian assured.

"We do not wish to frighten anyone," Mayor Herbert T. Wilkinson said. “We are not taking these means because the epidemic is particularly severe here at this time, but because we do not wish it to become so.”

That same day, Oct. 9, Missoula became the 23rd Montana town to report the presence of influenza. Billings reported 40 cases. By Oct. 10 Missoula caught and passed the Magic City with 37 reported new cases, 65 in all.

“Yesterday Dr. Ritchey gave orders to all saloon and pool hall proprietors in the city to the effect that their places of business will be closed if congregating is permitted,” the newspaper reported. “He said: ‘So long as the frequenters of these places are kept on the move, we will allow business to continue. If a man wants a drink he may go in and get it, and then move on, so far as we are concerned, but if he loiters the police will be called in to close the place. The same is true of pool halls.”

Chief of Police William Moore took it a step farther on Oct. 11, directing that all chairs and benches be removed from the saloons of the city except those used at lunch counters.

There was some indication the extreme measures were working. No one in Missoula had yet died from the Spanish flu and there were no new cases among the 241 personnel at Fort Missoula.

"It looks to me as if the danger point had been well passed,” remarked Capt. J.S. Maginnis, the fort commander. The Missoulian editor seemed to believe the same, and on Saturday, Oct. 12, he had some advice for kids playing forced hooky from school. The words reverberate a century or more later.

“Now that our school boys and girls are enjoying an unexpected vacation, we suggest that they keep themselves fit by keeping out in the open, breathing the fresh autumn air and taking a lot of outdoor exercise,” Martin Hutchens wrote. “Long hikes to the woods or up the Mount Sentinel will be fine for them and make it easy to dodge the grippe germs.”

Even when western Montana’s first influenza death occurred that same day, the newspaper all but overlooked it. A soldier from Silver Star near Whitehall named George Bonawitz died of pneumonia that resulted from influenza.

‘Flu’ Epidemic Seems Lessened. Despite One Death at Fort Missoula Conditions ‘Well in Hand,’ read the Sunday headline on Oct. 13.

The tone pivoted quickly by Monday.

This time the victim was 3-year-old Elsie Van Alstine of Alberton. Dr. Ritchey called it “a critical time in the stage of the epidemic,” and said there should be increased precautions taken. Mayor Wilkinson reiterated that stringent social distancing measures remained in effect, stressing no public or private meetings or social gatherings were to be held.

“This does not apply to Red Cross workers,” Wilkinson said, “for the reason that the greater part of their time is now devoted to making influenza masks to be used by attendants to prevent the spread of the contagion.”

The next day’s Missoulian carried even worse news. Little Elsie Van Alstine’s mother, Mabel, was among three people to die on Oct. 14, a gloomy Monday. The others were privates at the fort — Neil Joughin of Libby and George Nichols of Savage.

Despite encouraging words from the European war front, the Spanish flu turned the first two weeks of October in Missoula into see-saw rides of heartache and hope. The next two would be all but devoid of the latter.

Missoula Rewound is journalistically isolating itself from its normal Monday slot to recount in four installments the spread of the Spanish influenza pandemic of October 1918, as gleaned from missoulian.newspapers.com.

Montana added an additional 14 cases of the novel coronavirus by Sunday night for a total of 161.

Police say a Missoula man brandished a shotgun toward another man who told him to adhere to social distancing guidelines in a gas station checkout line.