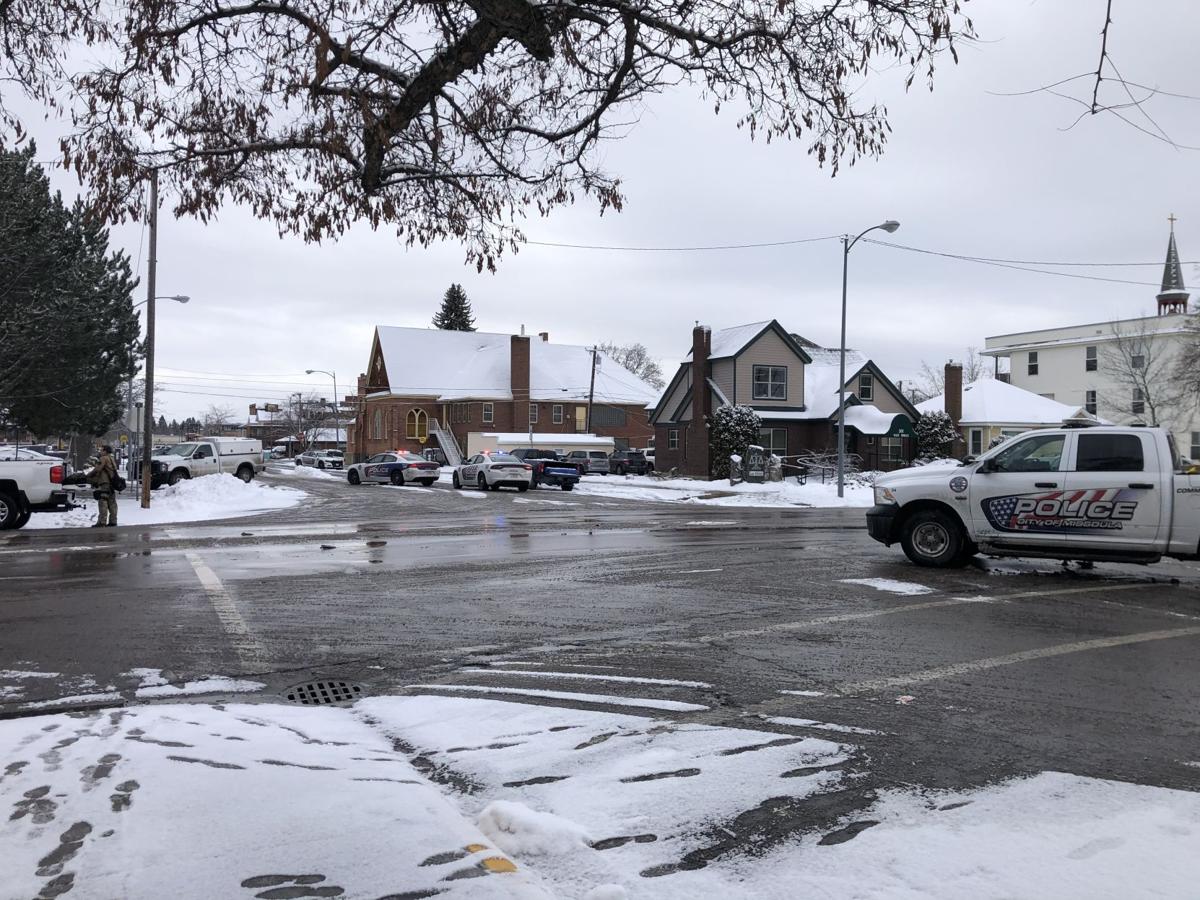 A portion of downtown around the courthouse was closed and City Hall was on lockdown Wednesday morning. 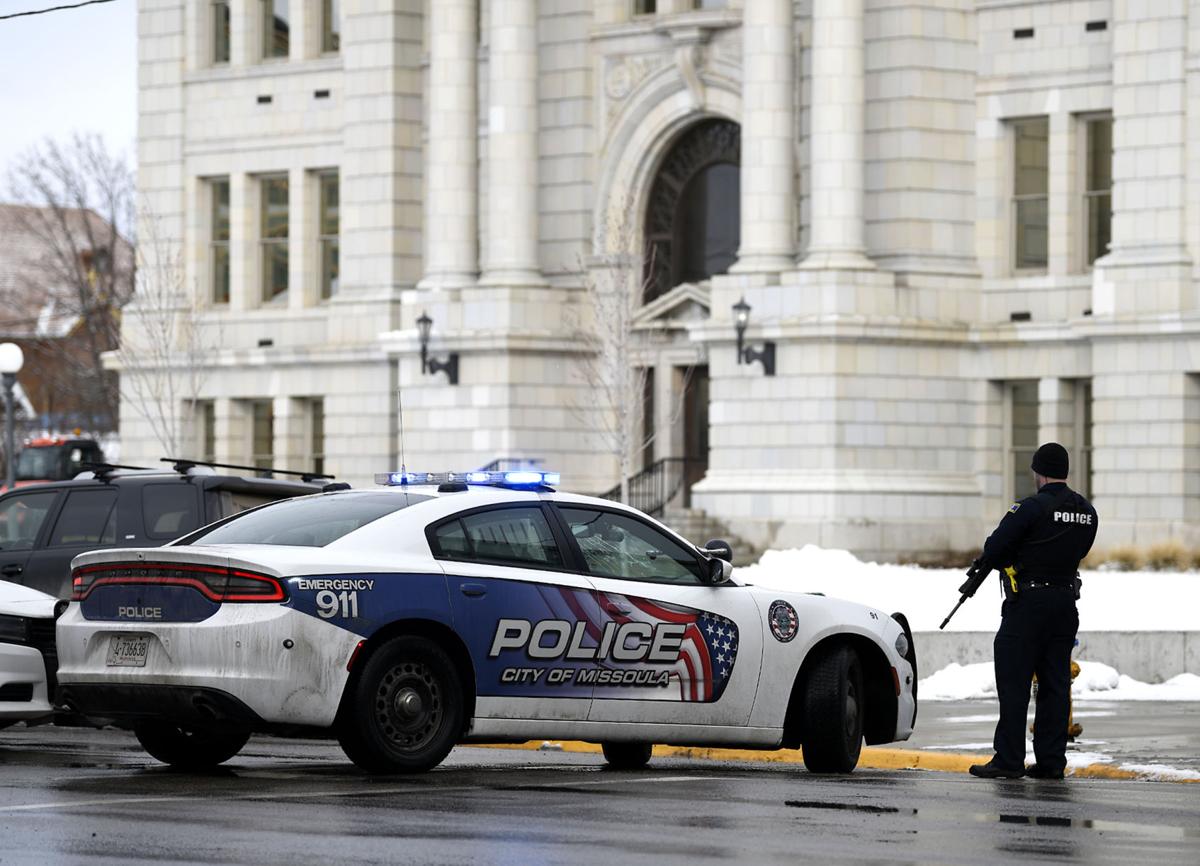 A Missoula City Police officer stands at the corner of West Broadway and Ryman streets in front of the Missoula County Courthouse on Wednesday during a lockdown in the area. 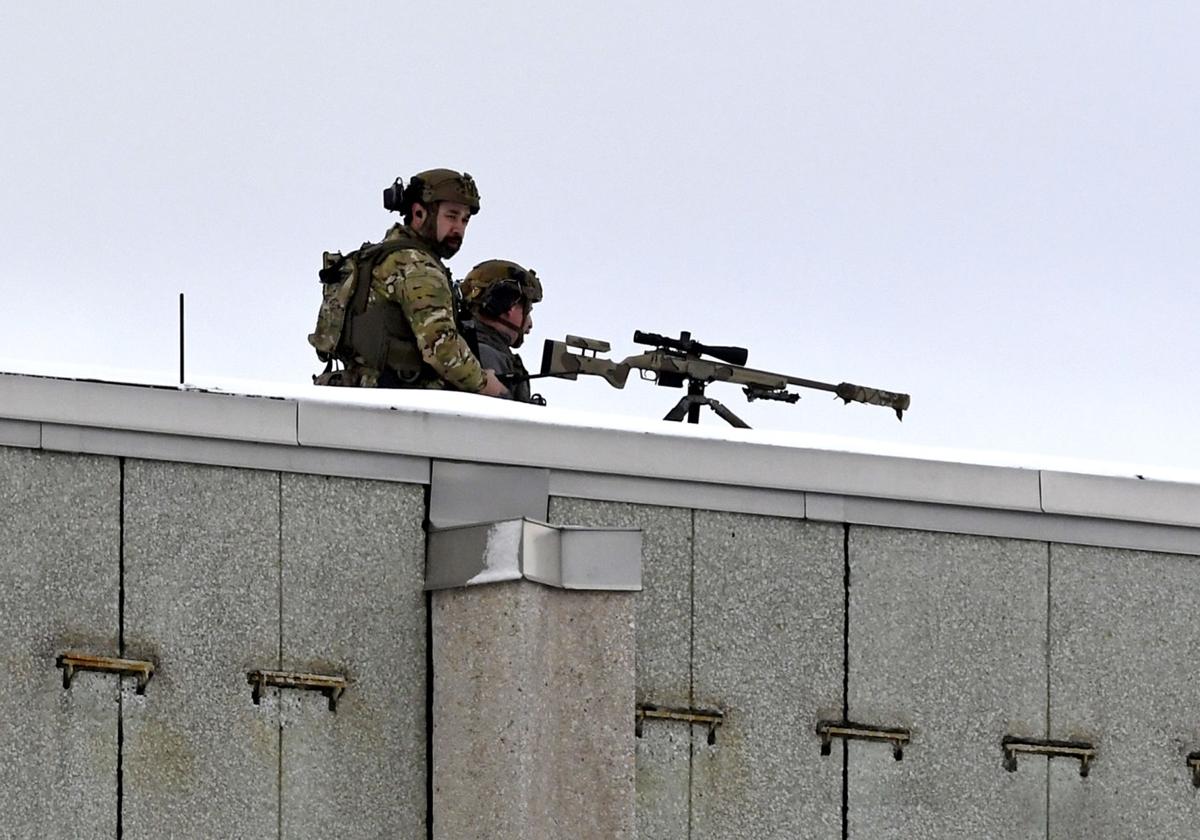 Law enforcement officers keep watch over the area from the roof of the Missoula County Courthouse on Wednesday. 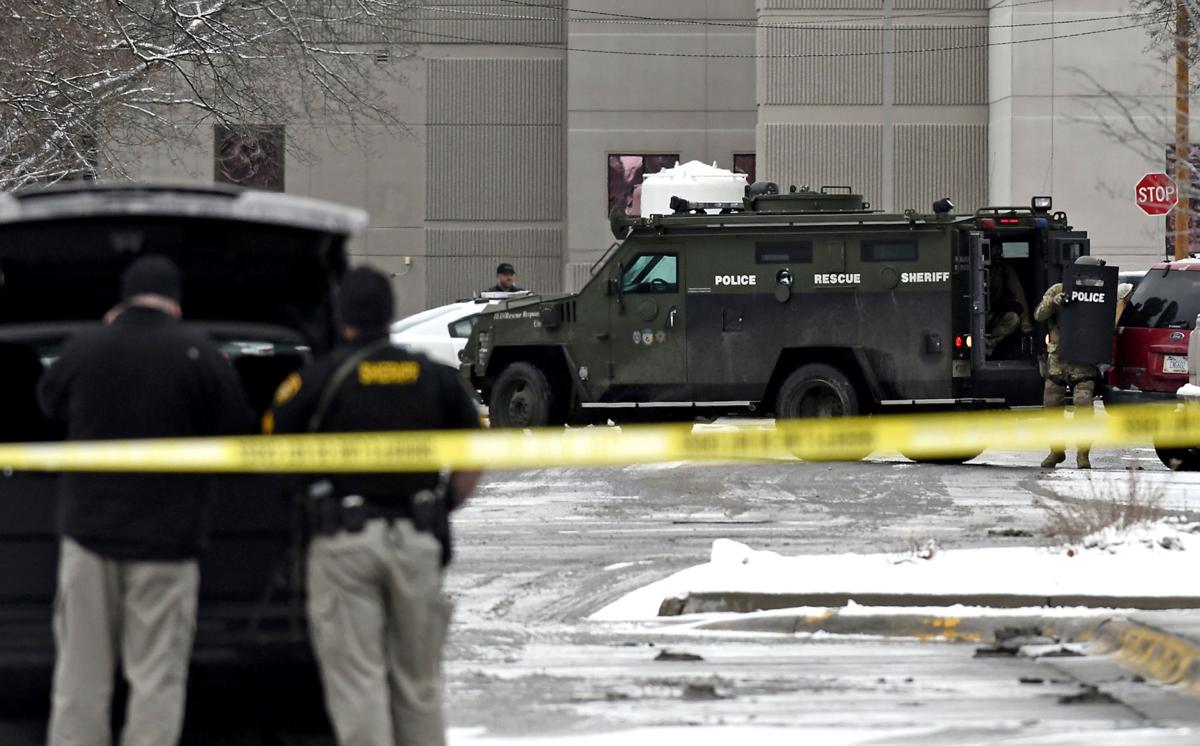 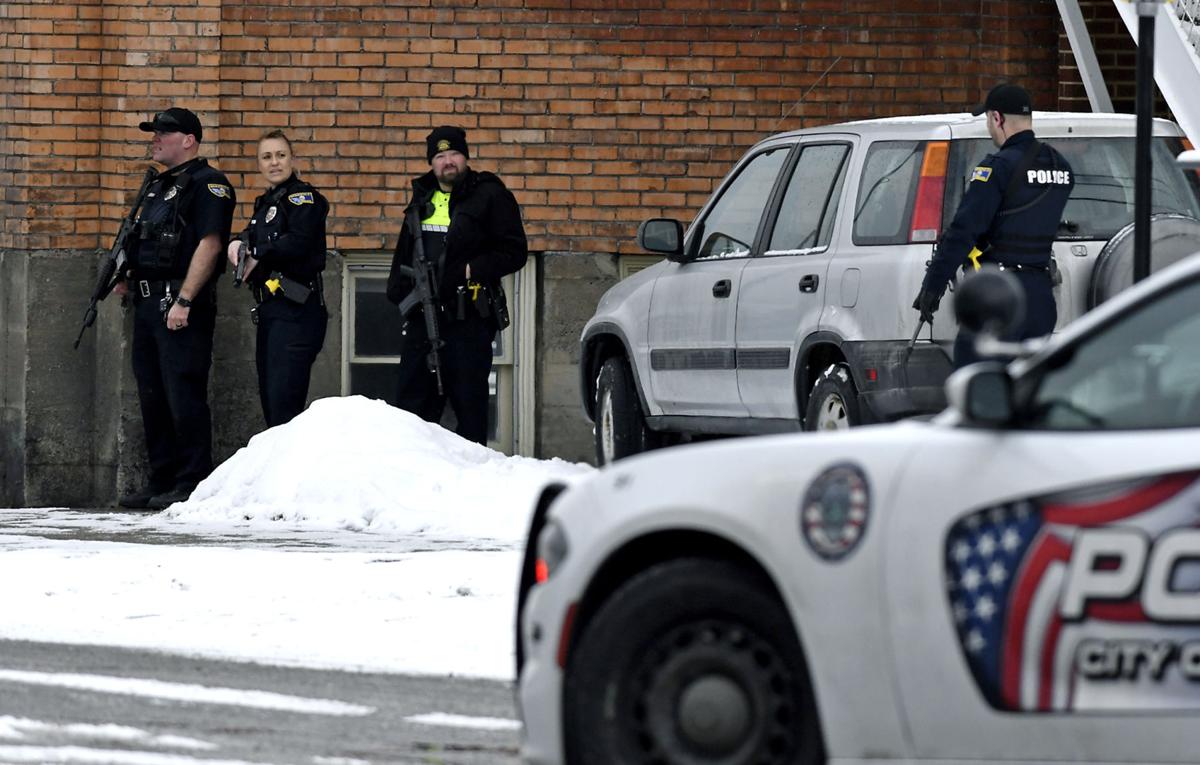 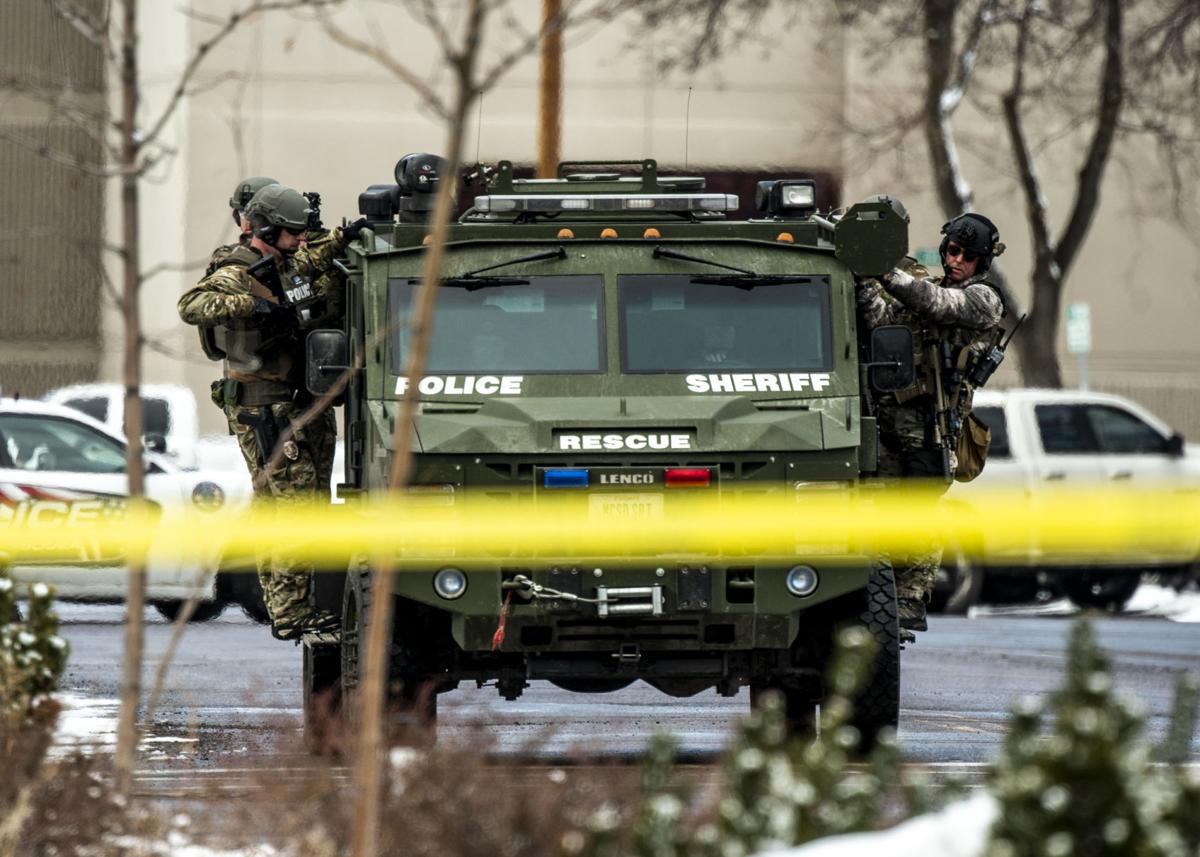 Law enforcement officers search an area near the Missoula County Courthouse after a report of shots fired at a Missoula police car being driven by an officer on Wednesday morning. No suspect had been apprehended as of 3 p.m. 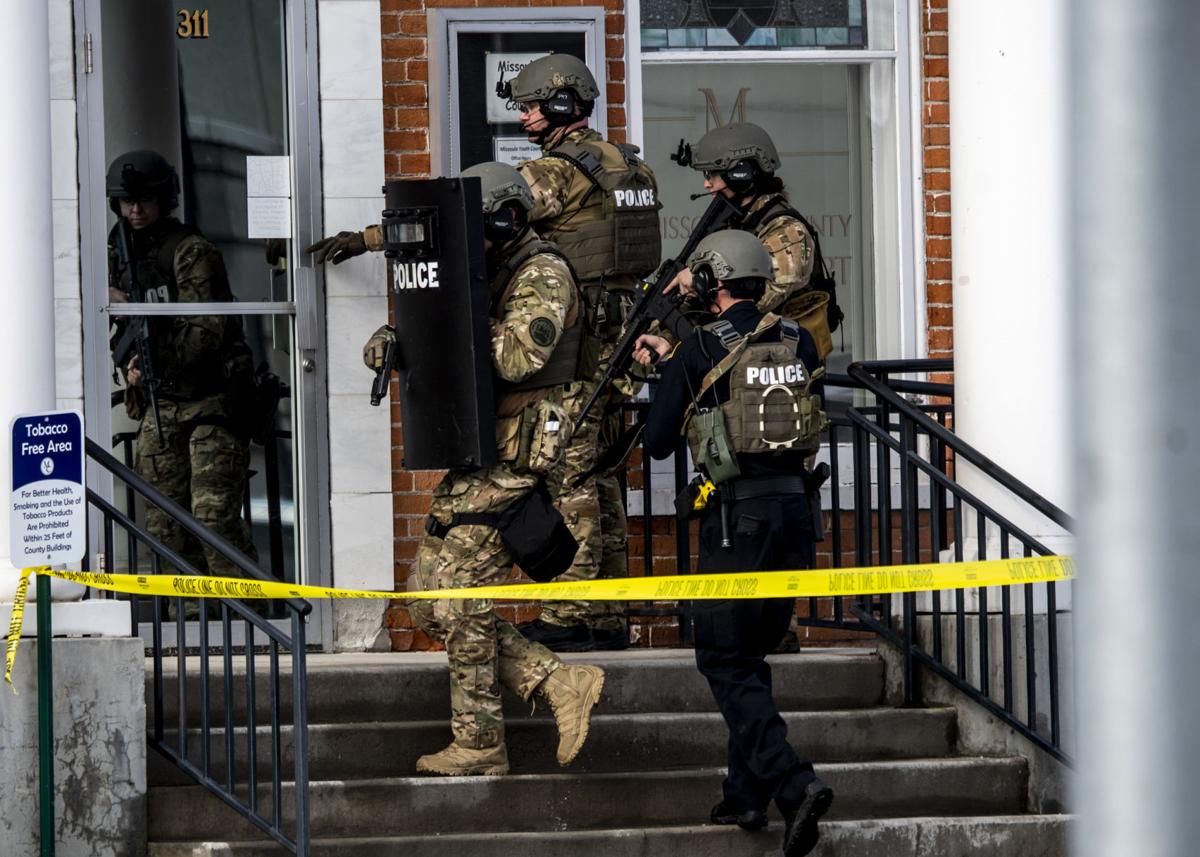 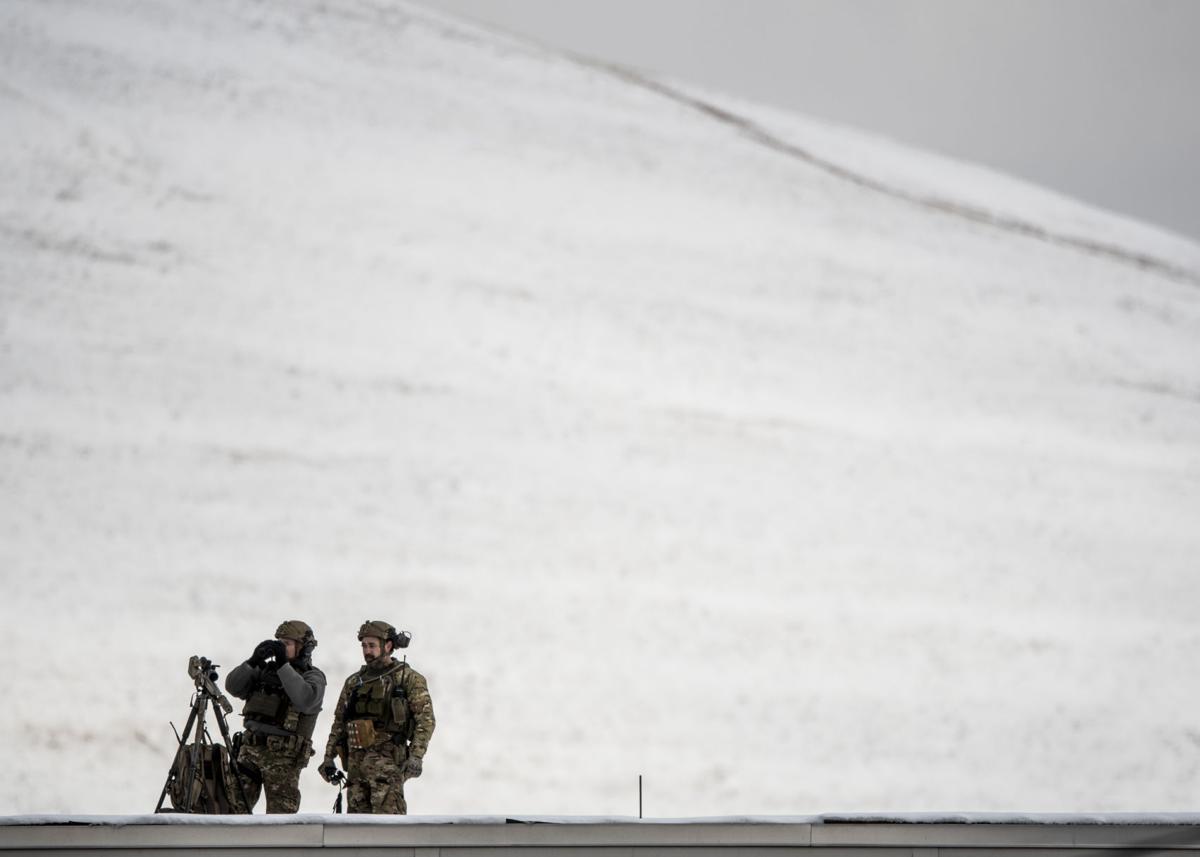 Sharpshooters keep watch over the area on the northwest corner of the Missoula County Courthouse. 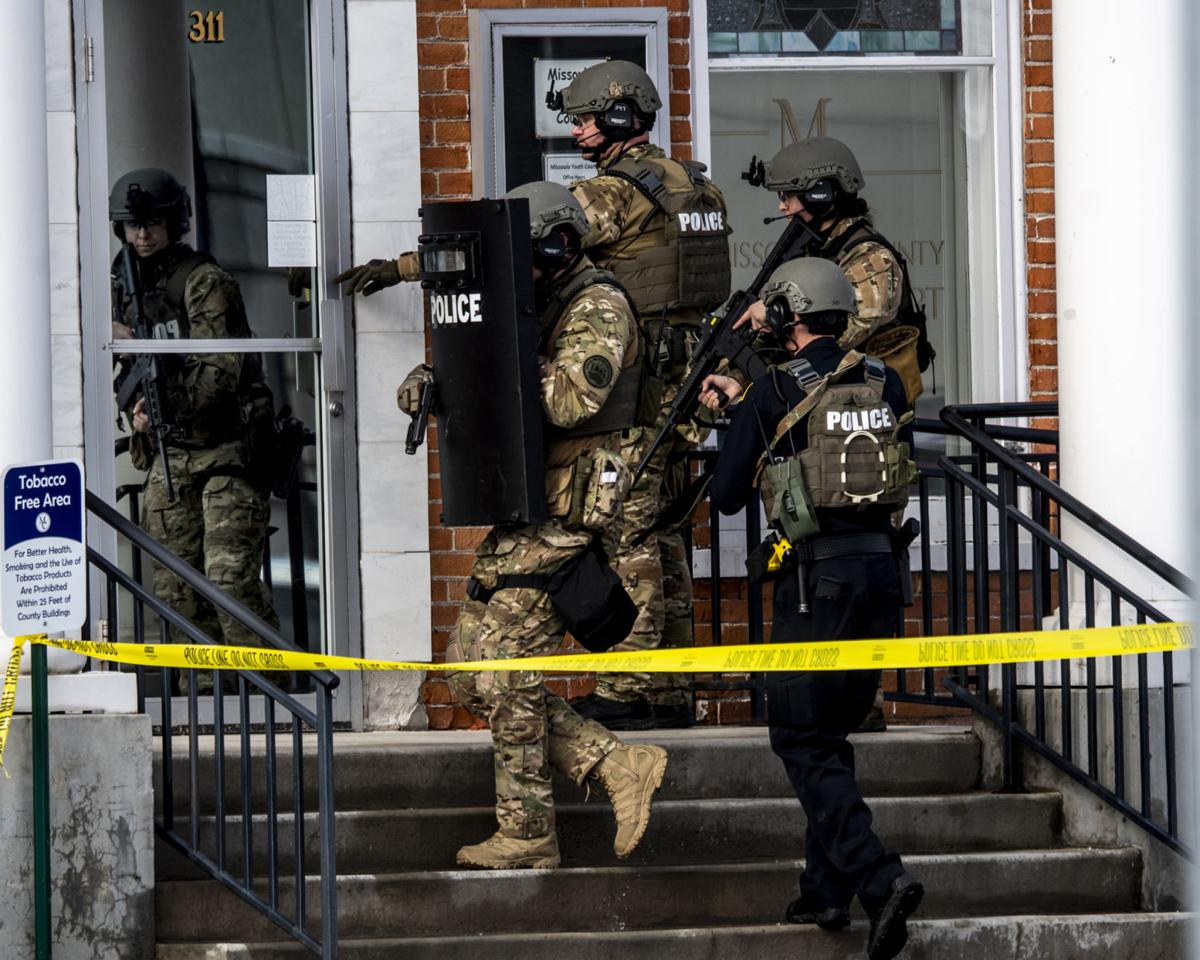 Law enforcement blitzed Missoula’s downtown area Wednesday after an apparent gunshot blew out the back window of a police officer’s patrol vehicle, setting off a eight-block shutdown in the heart of downtown Missoula for several hours.

By the day's end, Missoula police had no suspect in hand, nor a description of the suspected shooter. Most lockdowns had been lifted by late afternoon and the investigation remained ongoing as Missoula police searched around the intersection of Woody and Spruce streets for additional evidence and witnesses.

No one was injured in the suspected shooting and police believed the public was no longer in danger after closures lifted, according to officials.

“There are multiple officers working to unravel what happened this morning, trying to determine, if they can, a person that’s responsible,” Missoula Police Sgt. Travis Welsh said.

City and county services downtown largely ground to a halt Wednesday, as anyone trying to enter the area was turned around by law enforcement officers armed with rifles. Businesses in the immediately area were advised to lock their doors. Staff at City Hall were told to draw their blinds. County employees were initially told not to leave their buildings, while others were filtered out of buildings and away from the threat, which remained unknown into Wednesday night.

“We’ll catch the coward that did this to one of our officers,” Missoula City Councilman Jesse Ramos told the Missoulian. “This is not acceptable in Missoula. … If you mess with an officer you mess with the whole city of Missoula.”

The officer was traveling northbound on the 400 block of Woody Street around 9:45 a.m. Wednesday when he reported the back window of his patrol car had been shot out, Welsh told reporters at a press conference Wednesday afternoon. The officer immediately sought cover and prepared to counter the suspected shooter.

“He was not able to see anybody in the immediate vicinity or anyone who presented a threat to him,” Welsh said.

Law enforcement flooded into the area and snipers took to the rooftops. City and county buildings went on lockdown, as did Providence St. Patrick Hospital two blocks away. Welsh said police began interviewing witnesses and scanning the area for evidence, including surveillance footage that may have captured the incident, as the area remained on lockdown. Coordinating the investigation, as well as downtown morning traffic, made the search for evidence particularly complicated, Welsh said.

After law enforcement had drawn a clear perimeter, the SWAT team arrived with two armored vehicles. From the Missoula County courthouse, a Missoulian reporter watched as the team helped a woman and her infant from a parked car in the center of the perimeter on Woody into the armored vehicle. After moving the woman to a safer location, the SWAT team went door to door clearing buildings within the perimeter before returning to the police station at City Hall.

John Haines, staying at the Uptown Motel where the SWAT team focused much of its attention Wednesday morning, said he was told to stay inside. Haines, who was ale to see the snipers on the courthouse rooftop, said he was not afraid during the ordeal.

“It’s just part of what has to happen,” Haines said.

Down the block, Erin Keffeler, a manager at Bagels on Broadway, said the shop saw plenty of business directly connected to the action outside.

“People are drawn to commotion,” Keffeler said. “We had some people in here from the residential places that couldn’t get back into their places.”

Throughout the day, Keffeler received phone calls from 911 keeping the business updated on the situation, she said. While acknowledging the “serious” response by law enforcement, Keffeler said it was “a little concerning” no suspect had been apprehended.

Investigators immediately sealed up the patrol vehicle involved and will soon conduct a search of the car, Welsh said. At the time of the press conference, Welsh said a bullet or projectile that fractured the patrol car’s window had not been found. Still, police had gathered enough information to believe it was gunfire that set off Wednesday morning’s events.

“Right now, that seems to be the only consideration we have given the officer’s report, as well as statements from witnesses we have already obtained,” Welsh said.

“From my view in the command post, our law enforcement professionals in the Missoula Police Department acted swiftly, appropriately and professionally to ensure the safety of our employees and of the larger community,” Engen said in the statement. “Fortunately, no one was physically injured, and that’s a remarkable outcome in itself.”

Welsh said the officer involved, who was not identified Wednesday, was “a little shaken up,” but was able to recover and act due to his training.

Welsh told reporters it was possible every law enforcement officer in the northwest part of the country was aware of Wednesday’s incident in Missoula, and police continue to track down any information available.

“Officers are on alert, and they’re prepared to deal with similar-type threats and certainly they’ll engage in the duties they engage in every day, which is to serve our public,” Welsh said. “They’re still on patrol, still doing their duty and still available for calls for service.”

Anyone with information about the suspected shooting is asked to call MPD Detective Guy Baker at 406-396-4127.

This story has been updated to reflect City Hall did not reopen Wednesday, as previously reported from official statements from the city. City Hall was expected to reopen Thursday, Missoula Police Sgt. Travis Welsh said.

A portion of downtown around the courthouse was closed and City Hall was on lockdown Wednesday morning.

A Missoula City Police officer stands at the corner of West Broadway and Ryman streets in front of the Missoula County Courthouse on Wednesday during a lockdown in the area.

Law enforcement officers keep watch over the area from the roof of the Missoula County Courthouse on Wednesday.

Law enforcement officers search an area near the Missoula County Courthouse after a report of shots fired at a Missoula police car being driven by an officer on Wednesday morning. No suspect had been apprehended as of 3 p.m.

Sharpshooters keep watch over the area on the northwest corner of the Missoula County Courthouse.