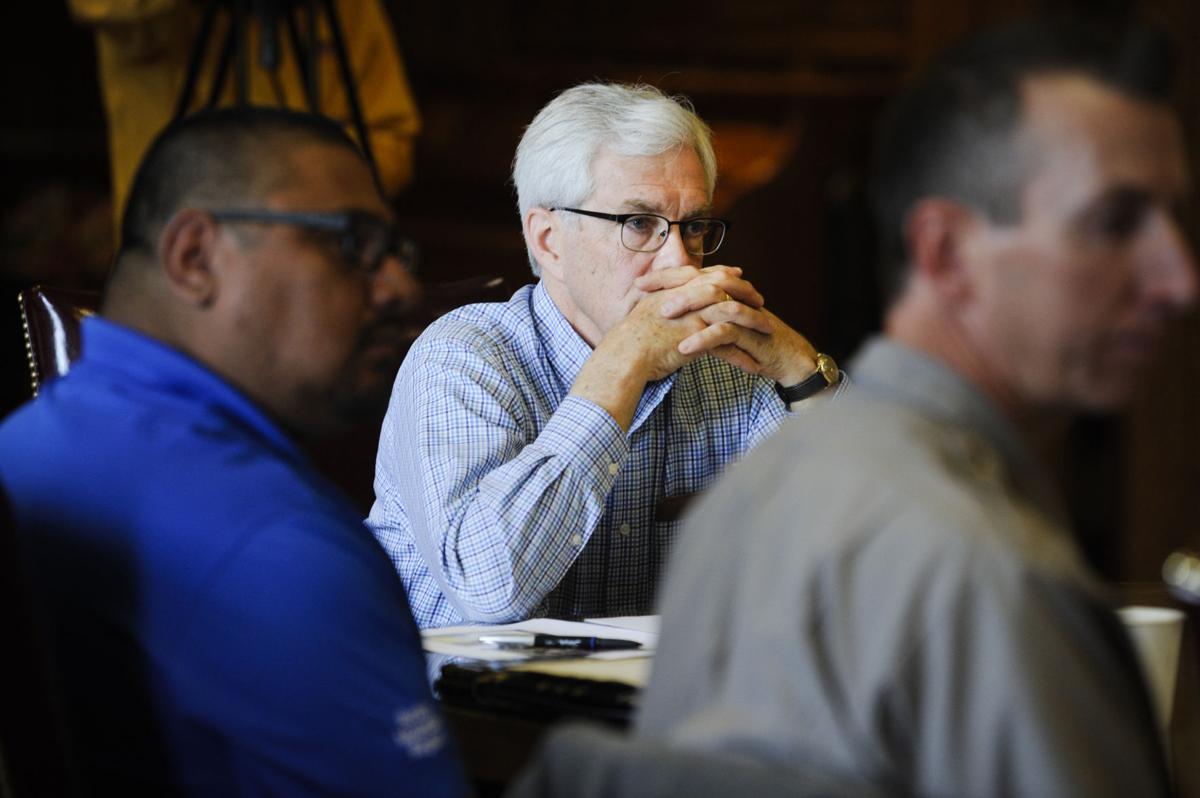 Lt. Gov. Mike Cooney listens to a report during a recent wildfire outlook meeting in the State Capitol. 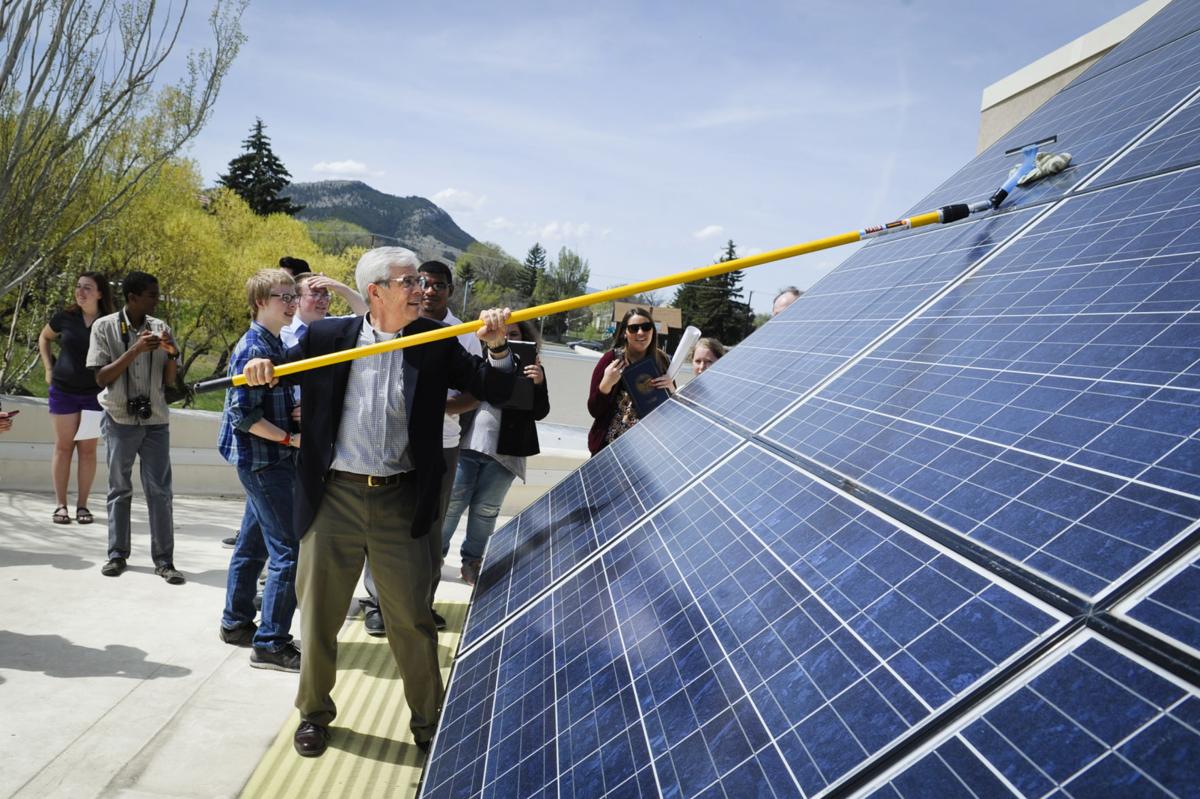 Lt. Gov. Mike Cooney scrubs a solar panel on the roof of Helena High School on while he was presenting the school’s Green Group with a Smart Schools grant in this IR file photo. 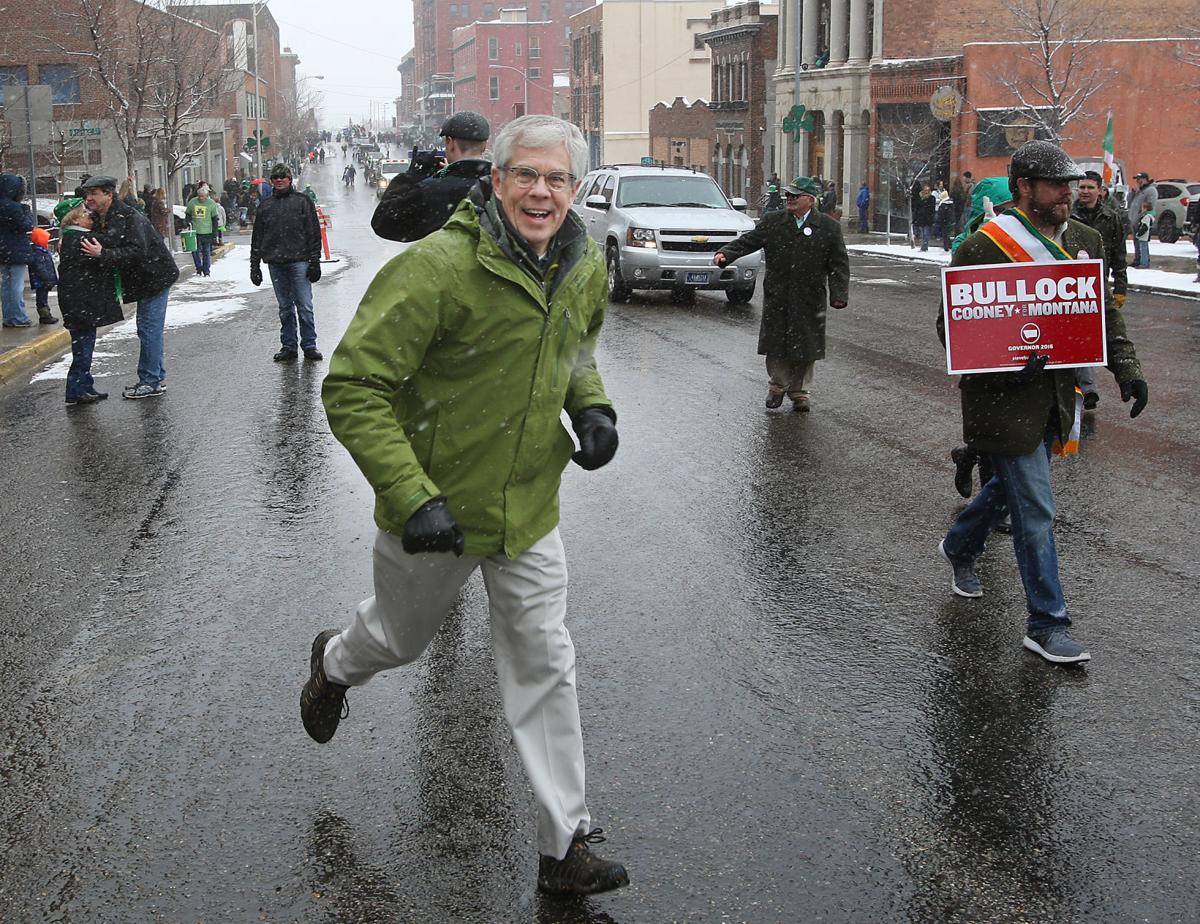 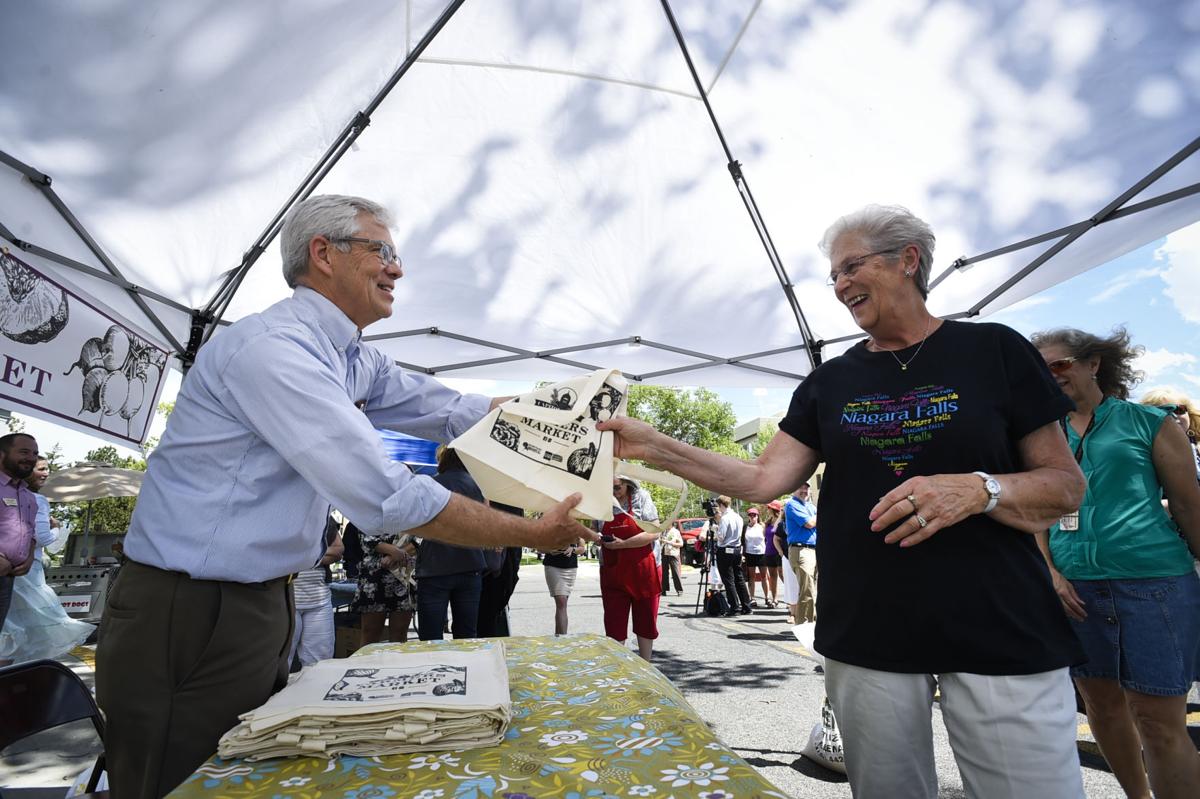 Cooney will announce his candidacy today in his hometown of Butte.

Cooney, 64, first elected to the Legislature at age 22, has since carved out a four-decade public-service career that includes a total of 12 years in the Legislature, including two years as president of the Senate; time in Washington, D.C. as a key staffer for Sen. Max Baucus; three terms as Montana's Secretary of State; leadership positions in the state Department of Labor and Industry; and even a stint as interim director of the Montana Historical Society. Gov. Steve Bullock tapped him as his third lieutenant governor in December 2015, and he won reelection to the post in 2016.

In an interview with The Montana Standard conducted Tuesday while he tried to get around an enormous pasty at Gamer's Cafe, Cooney said he's running for governor "because Montana's my state, my home," and the issues facing the state are  "too darned important for me to take a back seat."

He said that while "the economy is good overall, and we've made good progress in a number of areas — record investment in education, great things in healthcare — we have a lot of work to do to continue our momentum."

Cooney stressed that "we must continue to address our workforce — all across Montana, employers are looking for people to fill jobs. We have to keep pushing in our educational system, in work-based learning, apprenticeships." He vowed to keep working at "defeating the special-interest groups" in areas including the preservation of public lands and holding down prescription-drug prices.

"We have to remember as Montanans who we are, what values we want to carry forward, and what proposals will keep us moving in the right direction," he said.

His father's family established the Cooney Grocery Brokerage in Butte in 1894, and Cooney counts himself very lucky to have grown up in Butte.

"What a great life Butte has given me!" he said. "When I was a kid I'd go to one of my friend's homes, and it smelled different from mine because different food was being cooked there. Grandma and Grandpa would be there, and they came from the old country, and maybe they didn't speak very good English. But it gave me a chance to experience diversity far greater than most people in Montana saw."

He remembers Butte's way of helping others when they needed it. "I remember when the miners were on strike, and people would be hurting," he said. "So often around the holidays we'd be organizing food baskets for families because their dads were on strike.

"Butte was very special that way. I know it sounds Pollyanna-ish, but it's true. It taught me so much. I don't think I would have taken this journey if it had not been for the way I was raised, things I was exposed to."

Cooney's announcement is planned for noon Wednesday at Stodden Park.

Other Democrats who have announced for governor include Casey Schreiner, the House Minority Leader from Great Falls, and former legislator Reilly Neill of Livingston.

"I'm looking forward to it. There's so much at stake," he said.

Raising money will be a huge challenge. "No matter which Democrat wins the primary, they will be outspent by the Republicans. It will be a tough race, that's a given. Of course we need to raise as much as we can, but we just have to work harder, shake more hands, talk to more voters. I'm concerned that we keep heading in a positive direction."

After 16 years of Democratic governors, is he concerned Montanans will want a change?

"I think it's enormously important to maintain a balance in the government," he said. "The Legislature has been dominated by the Republicans. It's good to have a Democrat as governor."

Cooney ran for governor in 2000, losing in the Democratic primary. He remembers his mother telling him how upset she was when someone during that campaign said, "Mike Cooney is too nice a guy to be governor."

"'Oh, my goodness'," I said. If that's the worst thing somebody can say about me, that's okay. I believe in civility. I believe in listening when there's disagreement. If that makes me a nice guy, okay, that doesn't mean I'm ineffective."

He recalled that when he was president of the Senate, the House failed to pass a budget and Gov. Brian Schweitzer was forced to call legislators back to a special session to get the budget done.

"I'm not taking credit, but I was part of the negotiating group that patched together that budget. We ended up with an even better budget than we had before."

He feels that his reputation among Democrats and Republicans alike as someone who helps get to agreement will help him govern effectively.

"When there is disagreement, often it's important to look first at what we agree on, build on that, and then you can do something about the areas of disagreement," he said.

This essential skill is clearly part of Mike Cooney's makeup. As he carefully packages the remains of his lunchtime pasty for later noshing, he weighs in on one of the great Butte ideological divides.

And in typical Cooney fashion, he sees the wisdom in both positions.

Now that's a sure vote-getter.

HELENA — U.S. Rep. Greg Gianforte launched his campaign for Montana governor on Friday, immediately shaking up the contest for the Republican …

The first Democratic candidate for Montana governor has filed her paperwork with state regulators.

Lt. Gov. Mike Cooney listens to a report during a recent wildfire outlook meeting in the State Capitol.

Lt. Gov. Mike Cooney scrubs a solar panel on the roof of Helena High School on while he was presenting the school’s Green Group with a Smart Schools grant in this IR file photo. 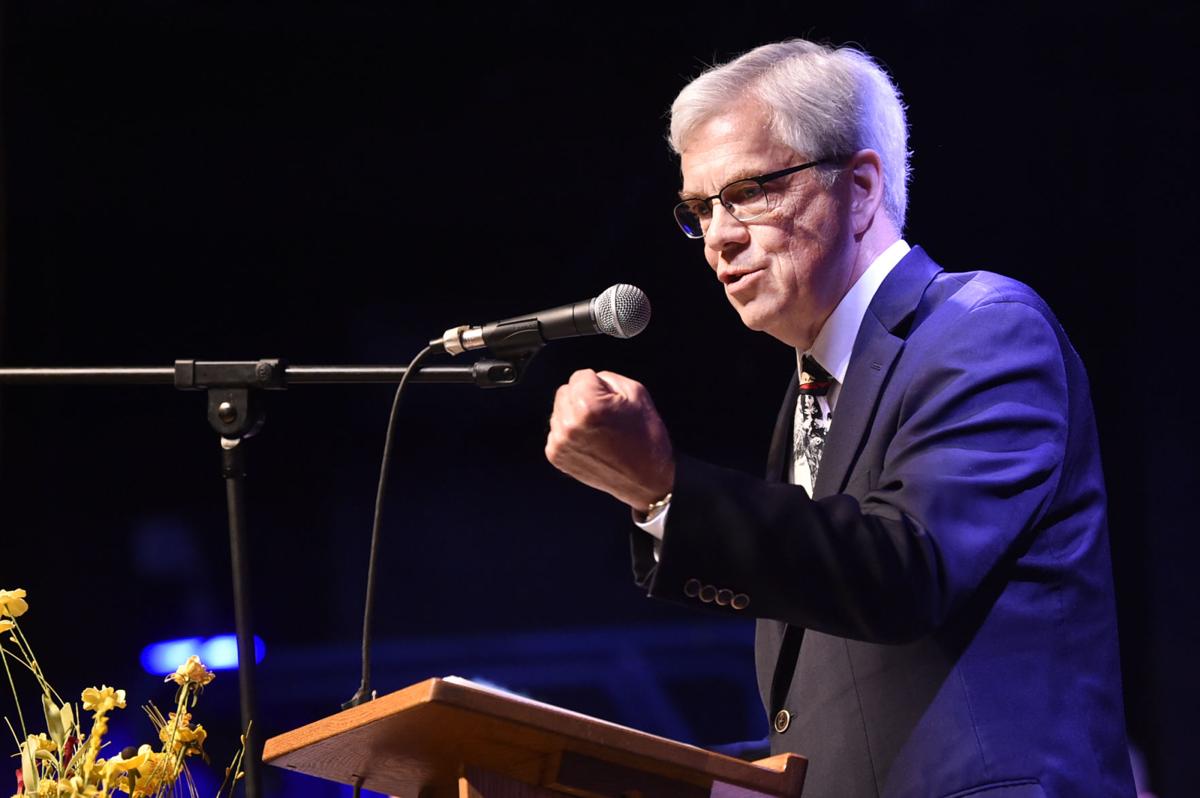 Lt. Gov. Mike Cooney speaks at The Project for Alternative Learning's graduation ceremony in May 2019 in Helena. Cooney announced Wednesday his plans to run for governor.