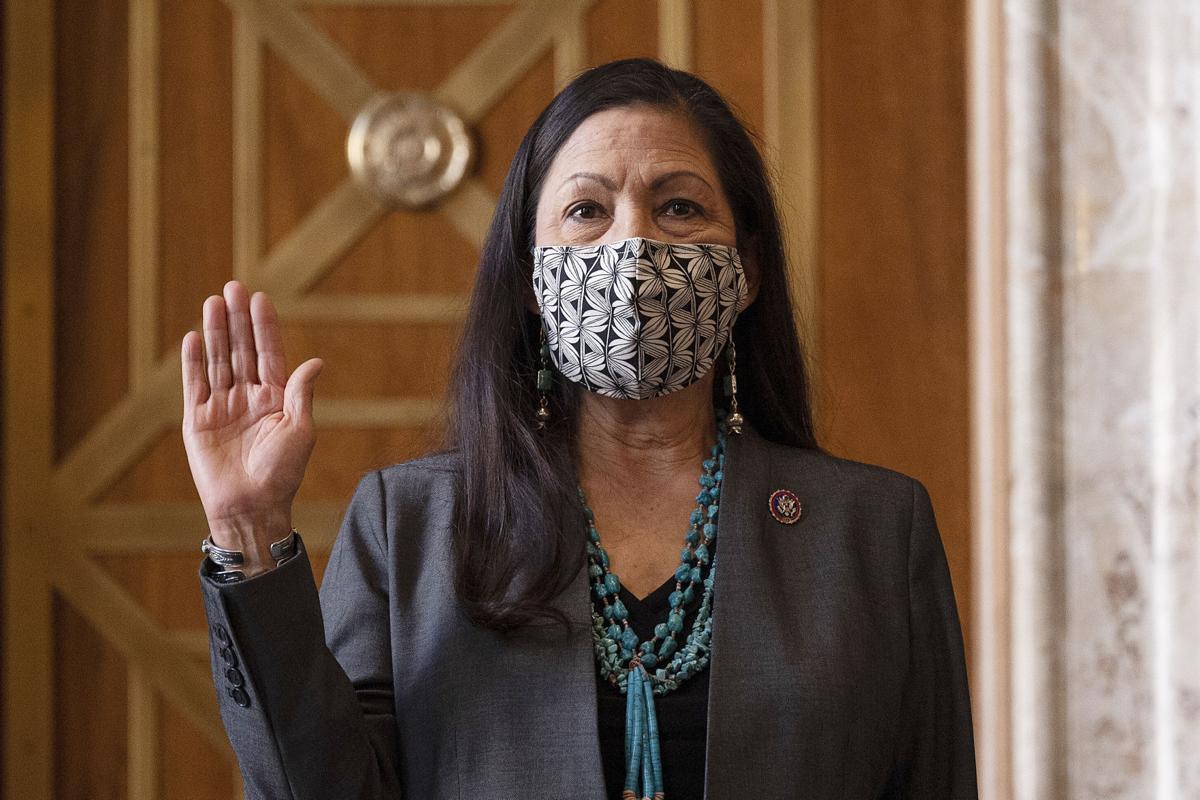 Rep. Deb Haaland, D-N.M., is sworn in Tuesday before the Senate Committee on Energy and Natural Resources hearing on her nomination to be Interior Secretary. 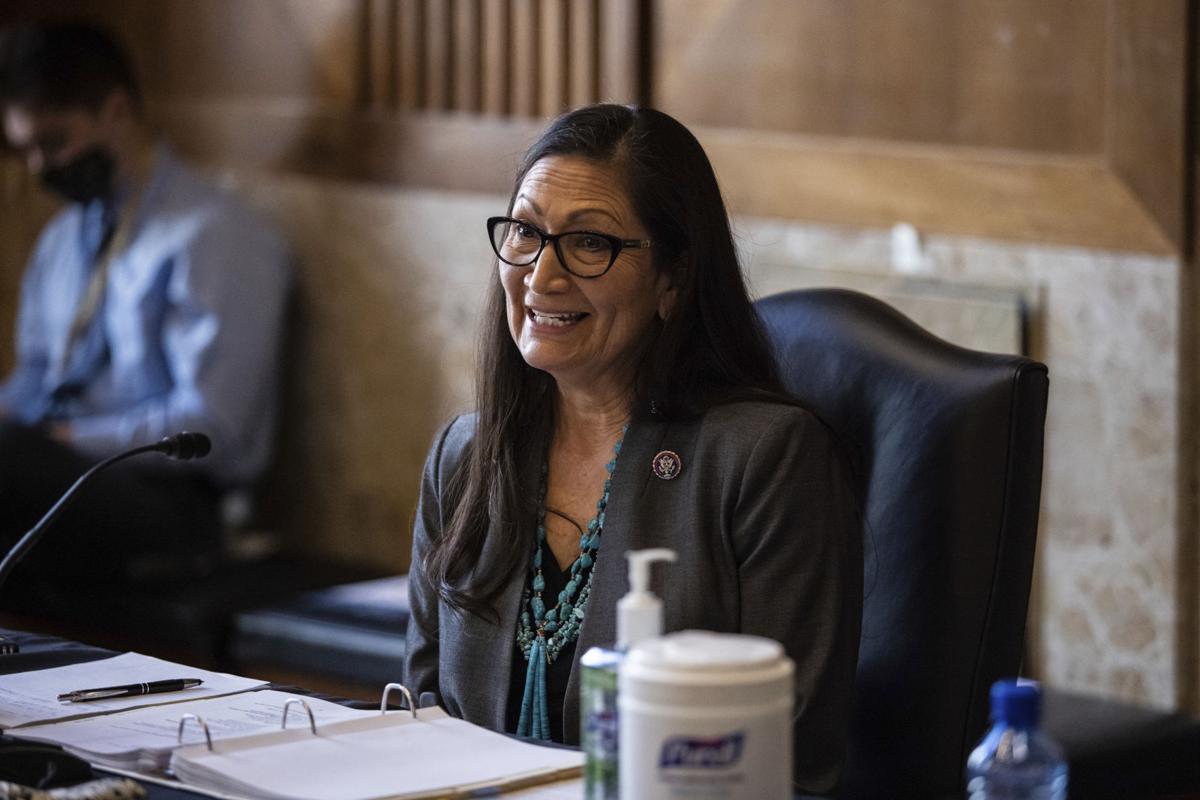 Rep. Deb Haaland, D-N.M., listens during a Senate Committee on Energy and Natural Resources hearing on her nomination to be Interior Secretary, Tuesday, Feb. 23, 2021 on Capitol Hill in Washington. (Graeme Jennings/Pool via AP)

WASHINGTON — President Joe Biden’s nominee to head the Interior Department faced sharp questions from Republicans Tuesday over what several called her “radical” ideas that include opposition to fracking and the Keystone XL oil pipeline.

Deb Haaland, a New Mexico congresswoman named to lead the Interior Department, tried to reassure GOP lawmakers, saying she is committed to “strike the right balance” as Interior manages oil drilling and other energy development while seeking to conserve public lands and address climate change.

If confirmed, Haaland, 60, would be the first Native American to lead a Cabinet agency.

Native Americans see her nomination as the best chance to move from consultation on tribal issues to consent and to put more land into the hands of tribal nations either outright or through stewardship agreements. The Interior Department has broad oversight over nearly 600 federally recognized tribes as well as energy development and other uses for the nation’s sprawling federal lands.

“The historic nature of my confirmation is not lost on me, but I will say that it is not about me,″ Haaland testified. “Rather, I hope this nomination would be an inspiration for Americans — moving forward together as one nation and creating opportunities for all of us.″

Haaland's hearing before the Senate Energy and Natural Resources Committee was adjourned after nearly 2-1/2 hours and will resume Wednesday.

Under questioning from Sen. Joe Manchin, D-W.Va., the panel's chairman, Haaland said the U.S. will continue to rely on fossil fuels such as oil and natural gas even as it moves toward Biden’s goal of net zero carbon emissions by mid-century. The transition to clean energy “is not going to happen overnight,” she said.

Manchin, who is publicly undecided on Haaland’s nomination, appeared relieved, saying he supports “innovation, not elimination” of fossil fuels.

Sen. Steve Daines, R-Mont., was less impressed. He displayed a large chart featuring a quote from last November, before Haaland was selected to lead Interior, in which she said: “If I had my way, it'd be great to stop all gas and oil leasing on federal and public lands."

If confirmed as Interior secretary, "you will get to have it your way,'' Daines told Haaland.

She replied that Biden's vision — not hers — will set the course for Interior. "It is President Biden's agenda, not my own agenda, that I will be moving forward,'' Haaland said, an answer she repeated several times.

While Biden imposed a moratorium on oil and gas drilling on federal lands — which doesn’t apply to tribal lands — he has repeatedly said he does not oppose fracking. Biden rejected the long-pIanned Keystone XL pipeline on his first day in office.

Haaland also faced questions over her appearance at protests of the Dakota Access Pipeline in North Dakota before she was elected to Congress in 2018.

Haaland said she went there in solidarity with Native American tribes and other “water protectors” who “felt they were not consulted in the best way'' before the multi-state oil pipeline was approved.

Asked by Sen. John Hoeven, R-N.D., if she would oppose a renewal of the pipeline permit, Haaland said she would first ensure that tribes are properly consulted. She told Hoeven she also would "listen to you and consult with you.''

Sen. Maria Cantwell, D-Wash., said the GOP questions over oil drilling and pipelines revealed a partisan divide in the committee.

“I almost feel like your nomination is this proxy fight about the future of fossil fuels," Cantwell said, adding that Haaland had made clear her intention to carry out Biden’s clean-energy agenda. She and other Democrats “very much appreciate the fact that you’re doing that, and that’s what I think a president deserves with his nominee,'' Cantwell said.

In her opening statement, Haaland told lawmakers that as the daughter of a Pueblo woman, she learned early to value hard work. Her mother is a Navy veteran and worked for a quarter-century at the Bureau of Indian Education, an Interior Department agency. Her father was a Marine who served in Vietnam. He received the Silver Star and is buried at Arlington National Cemetery.

“As a military family, we moved every few years ... but no matter where we lived, my dad taught me and my siblings to appreciate nature, whether on a mountain trail or walking along the beach,'' Haaland said.

The future congresswoman spent summers with her grandparents in a Laguna Pueblo village. “It was in the cornfields with my grandfather where I learned the importance of water and protecting our resources and where I gained a deep respect for the Earth,'' she said.

Haaland pledged to lead the Interior Department with honor and integrity and said she will be “a fierce advocate for our public lands.”

She promised to listen to and work with members of Congress on both sides of the aisle and ensure that decisions are based on science. She also vowed to “honor the sovereignty of tribal nations and recognize their part in America’s story.''

Some Democrats and Native American advocates called the frequent description of Haaland as “radical” a loaded reference to her tribal status.

“That kind of language is sort of a dog whistle for certain folks that see somebody who is an Indigenous woman potentially being in a position of power,” said Ta’jin Perez with the group Western Native Voice.

In an op-ed in USA Today, former Sens. Mark and Tom Udall said Haaland's record "is in line with mainstream conservation priorities. Thus, the exceptional criticism of Rep. Haaland and the threatened holds on her nomination must be motivated by something other than her record.''

Daines called the notion of racial overtones in his remarks outrageous.

“I would love to see a Native American serve in the Cabinet. That would be a proud moment for all of us in this country. But this is about her record and her views,” he said in an interview.

National civil rights groups have joined forces with tribal leaders and environmental groups in supporting Haaland. A letter signed by nearly 500 national and regional organizations calls her “a proven leader and the right person to lead the charge against the existential threats of our time,'' including climate change and racial justice issues on federal lands.

The workers are continuing to protest despite losing their jobs.

Resting with his back against a tree, a bloodied and dazed Carl Mock called 911 after being severely mauled by a 410-pound male grizzly bear on Thursday.

See who got COVID-19 relief payments in Montana, and how much

Montana's Coronavirus Relief Fund grant programs opened on May 7, 2020 and have distributed tens of millions of dollars to businesses and nonprofits throughout Montana.

Opponents say the measure unnecessarily harms transgender youth without "saving women's sports," as the bill purports to do.

Giles confirmed as head of Dept of Administration

The new law requires that either county commissioners or the city council, whichever entity oversees a local health board, approve of that board or officer's regulations put in place.

Rep. Deb Haaland, D-N.M., is sworn in Tuesday before the Senate Committee on Energy and Natural Resources hearing on her nomination to be Interior Secretary. 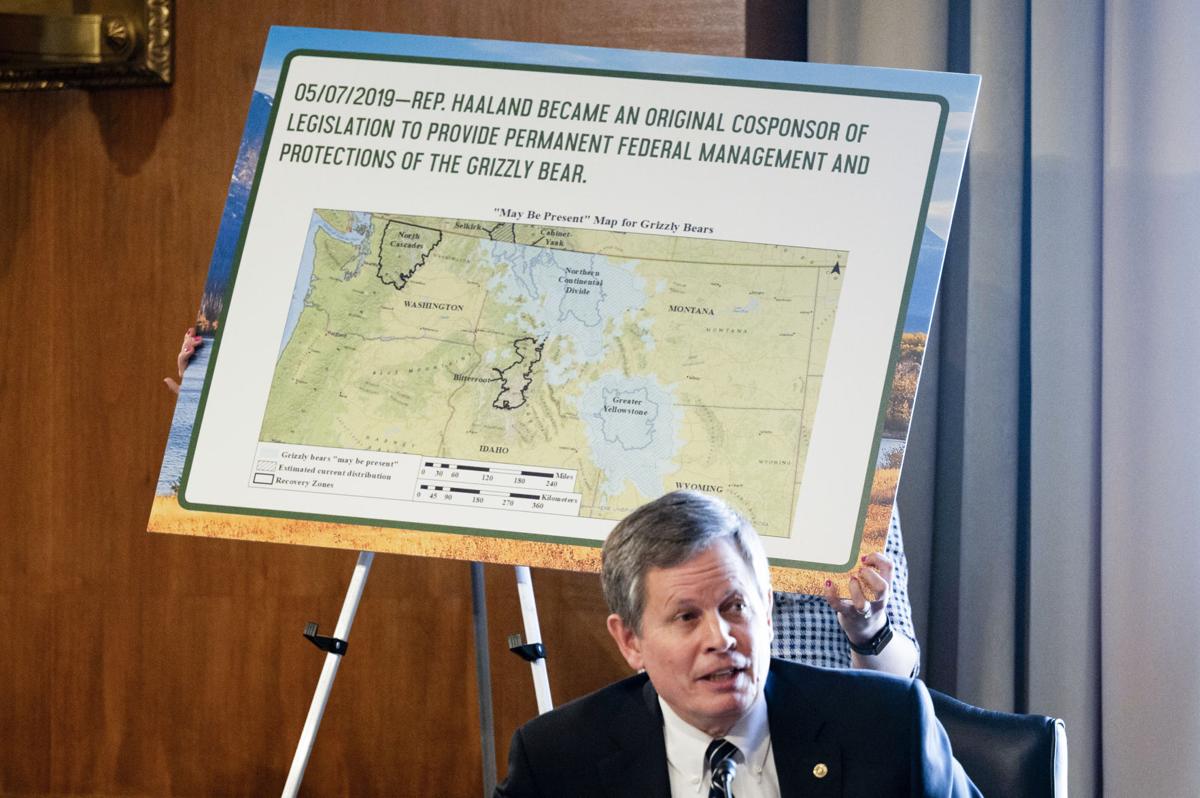 A board is put up as Sen. Steve DaInes, R-Mont., speaks Tuesday during the Senate Committee on Energy and Natural Resources hearing on the nomination of Rep. Deb Haaland, D-N.M., to be Interior Secretary.

Rep. Deb Haaland, D-N.M., listens during a Senate Committee on Energy and Natural Resources hearing on her nomination to be Interior Secretary, Tuesday, Feb. 23, 2021 on Capitol Hill in Washington. (Graeme Jennings/Pool via AP)