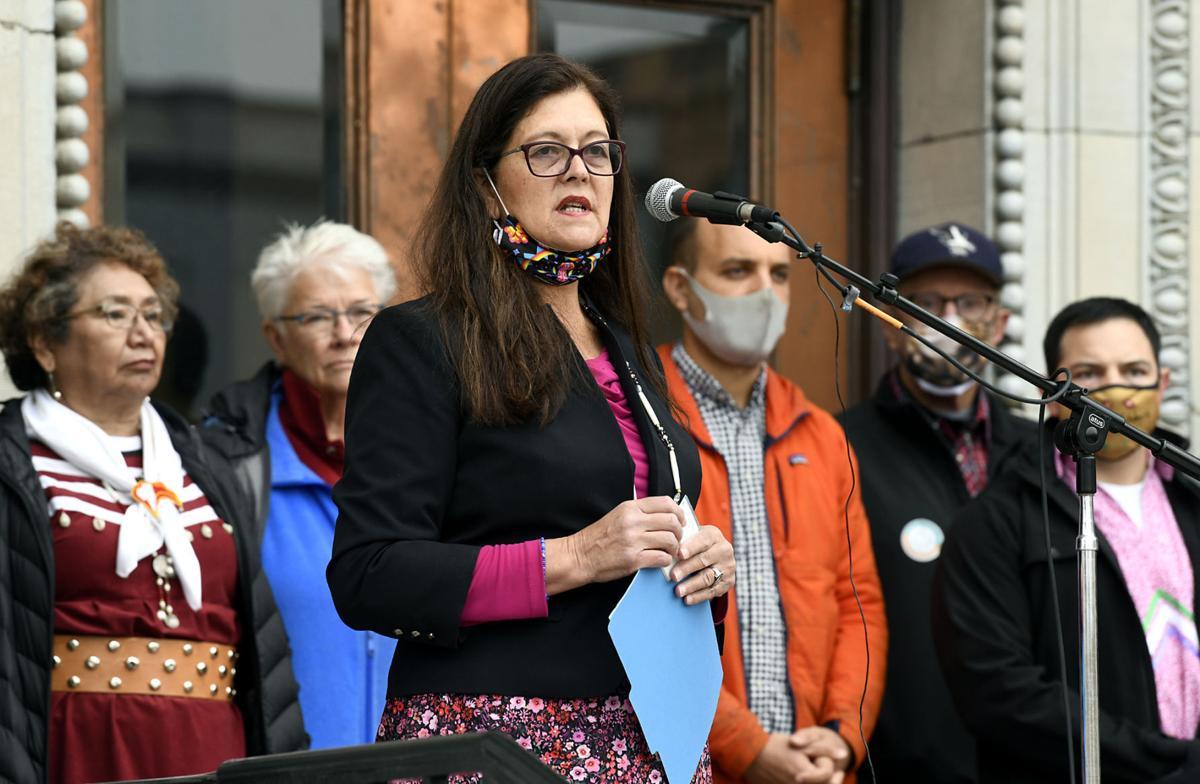 Shelly Fyant, chair of the Confederated Salish and Kootenai Tribes, speaks during a gathering Monday for Indigenous Peoples Day at the Missoula County Courthouse. 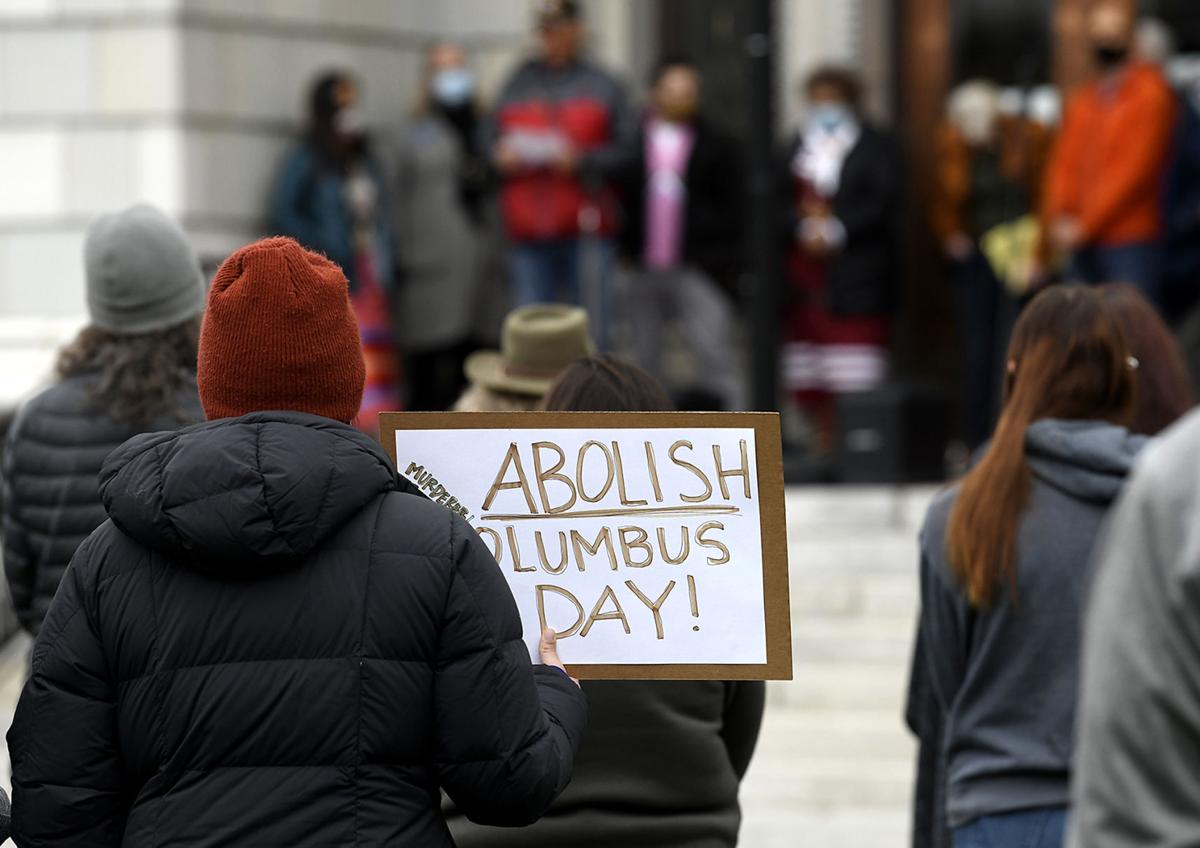 About 150 people gathered at the Missoula County Courthouse on Monday to celebrate Indigenous Peoples Day. 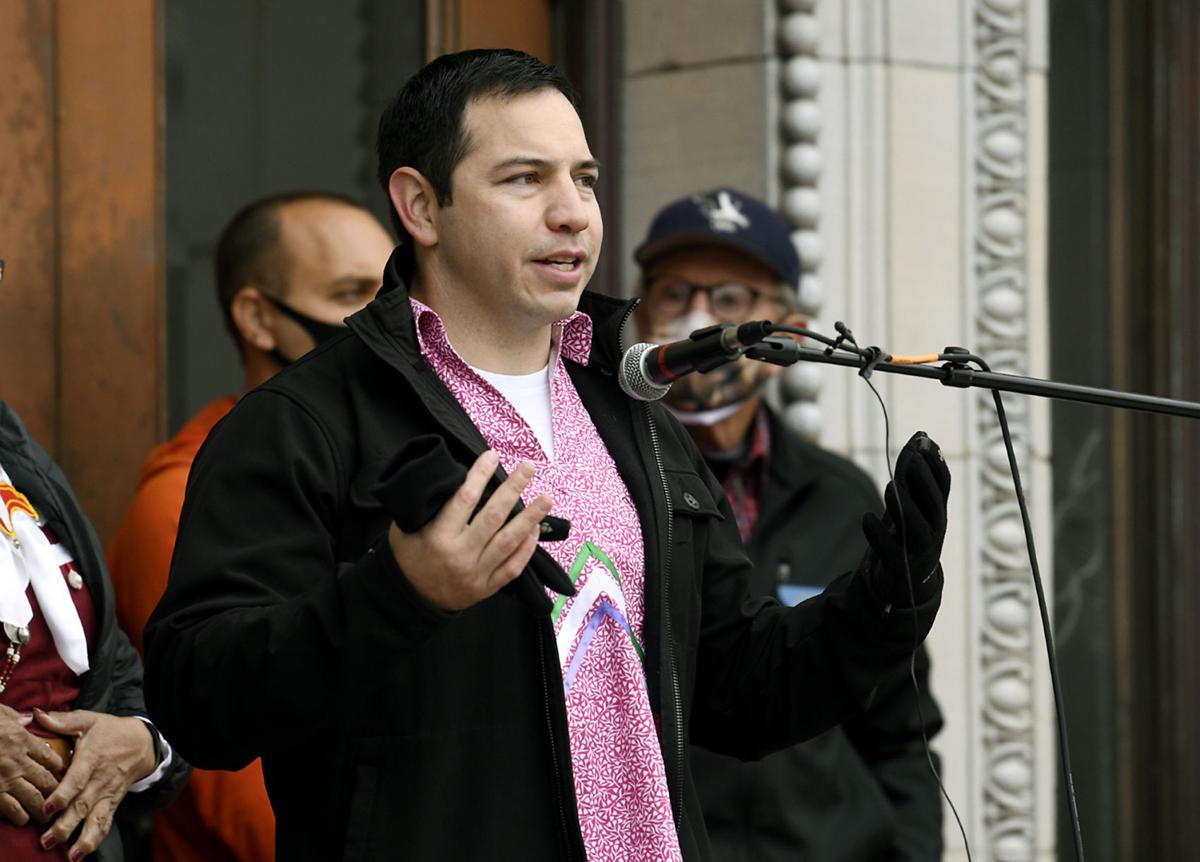 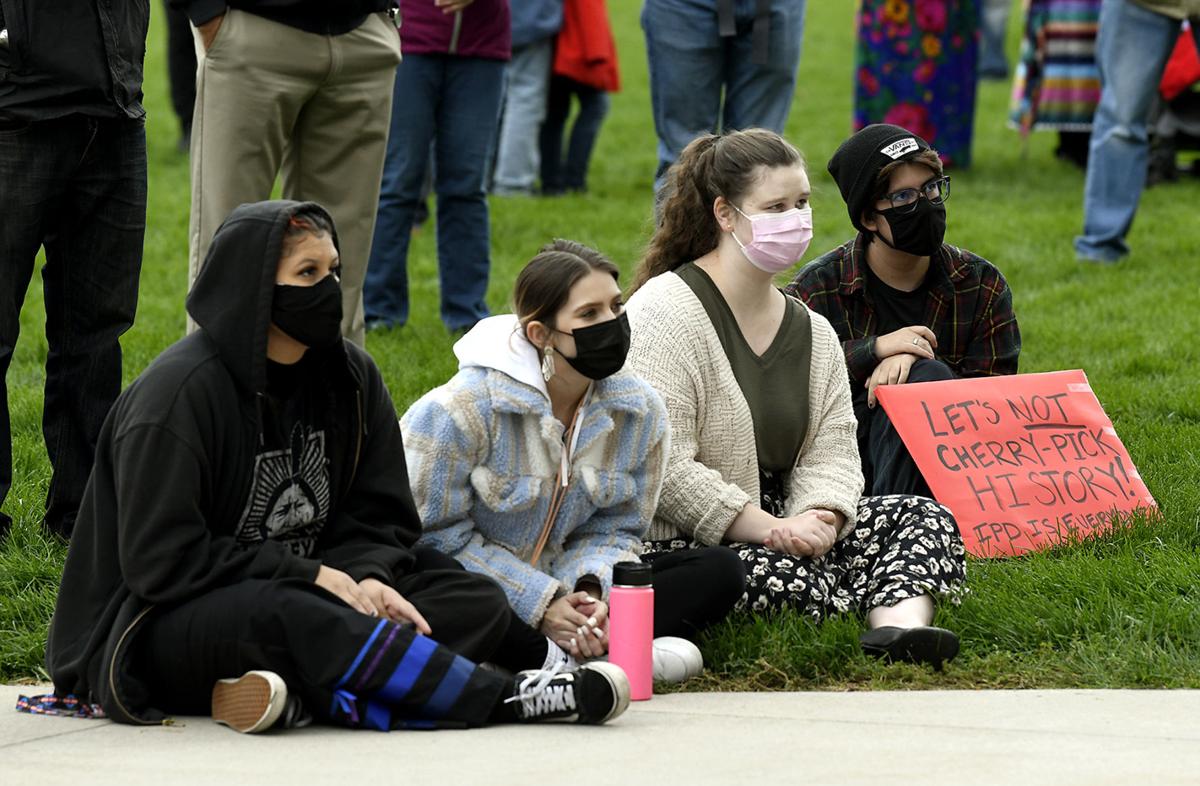 People attending the rally on Monday listen to speakers at the Missoula County Courthouse.

Roughly 150 people braved the cold Monday and gathered at the Missoula County Courthouse for a call to action and a rally on Indigenous Peoples Day.

It's a day recognized by the city government here and by several other communities in Montana but not by the state government, which acknowledges the second Saturday in October as Columbus Day.

The first speaker was Shelly Fyant, the chair of the Confederated Salish and Kootenai Tribes.

“We’ve come here today to celebrate,” she said. “Every day is Indigenous Peoples Day to the people who are Indigenous to this land.”

In the Salish language, the word for human beings is a combination of the words for “flesh” and “land,” she said.

“Our every step upon this land is a prayer,” she said. “We try very hard to conduct ourselves light on the land, covering our tracks so as to leave the earth the same, or maybe even better than we found it.”

Fyant said the dominant majority would be wise to listen to Indigenous voices.

“Our traditional ecological knowledge is time-tested, proven for millennia, living in reciprocity with our Mother,” she said. “She will continue to provide and care for us only if we take care of her.”

The creation stories of Indigenous people are reminders that human beings speak for all life forms that don’t have a voice, including animals and plants.

“We respect all those life sources equally,” she said. “We have to care for them, to speak for their protection, especially in these modern times."

Respect for all human beings is important, she said.

"Even those who have disrespected us since contact," Fyant said. "Those who practiced genocide and later erasure. The government, churches and educational institutions were all a part of that dark history of stolen land, language and culture.”

Monday was about beginning the long-overdue process of mutual understanding, reconciliation and healing moving forward, she said.

Fyant, like other speakers, called on the state to officially recognize Indigenous Peoples Day.

During the state legislative session this past winter, Sen. Shane Morigeau, D-Missoula, sponsored a bill that would strike “Columbus Day” from state law and replace it with Indigenous Peoples Day. Although a large number of speakers testified in favor, the bill wasn’t supported by enough lawmakers and failed.

In 2015, Patrick Weasel Head made it a priority, as the only Native American member of the Missoula City Council, to have the day recognized by the city. Native Americans account for more than 6% of Montana's population, the fourth-highest percentage in the country.

On Monday, Morigeau said he’ll keep up the fight to get statewide recognition.

“I think it’s important that we have a day that we can come together and recognize each other and appreciate each other,” Morigeau said. “Not a day to celebrate a man who committed really egregious atrocities on innocent people, sex trafficking girls as young as age 9. This should not be a day where we’re honoring somebody like that or celebrating somebody like that.”

Dr. Karla Bird, an enrolled member of the Blackfeet Nation and the president of Blackfeet Community College in Browning, said Indigenous activists have been crucial in the push to set aside sacred public lands for protection from industrial development. Their victories include Bears Ears National Monument, Grand Staircase-Escalante National Monument and the Northeast Canyons and Seamounts Marine National Monument.

“Additionally, Indigenous climate activists in the U.S. and Canada have stopped or delayed greenhouse gas pollution equivalent to at least one-quarter of annual U.S. and Canadian emissions,” she said.

Indigenous protesters played a huge role in fighting the Keystone XL pipeline, and several tribes in Montana filed suit against the pipeline.

“Today, we acknowledge that traditional knowledge can fuel solutions that can guide intersectional and inclusive environmental policy,” Bird concluded. “Thank you all for your continued advocacy efforts and let’s use today to celebrate Indigenous Peoples Day.”

A variety of activities to celebrate the day were also held on the University of Montana campus on Monday, including ethnobotany tours at the Payne Family Native American Center and a presentation by the UM Pacific Islanders Club.

The surge of COVID-19 in Montana continues to swell.

A small group of hunters shot and killed a grizzly bear in the backcountry east of Gardiner on Oct. 3, according to Fish, Wildlife & Parks.

“I am personally disgusted by the homophobic and misogynistic views that were reported in the Montana Kaimin," said UM President Seth Bodnar on Monday.

A University of Montana computer science professor has been put on paid leave pending an investigation spurred by reporting by the Montana Kaimin.

Woman gets 40 years in strangling death of Dillon man

DILLON — A judge sentenced 21-year-old Sandy Rose Moore to 40 years in the Montana Women’s Prison on Tuesday for strangling an older boyfriend to death in a rental home they shared here.

The idea for a reorganization is not new, but the increase in recreation in Montana as a major factor in implementing changes now, said FWP Director Hank Worsech.

A GoFundMe page set up for a Washington woman who was severely burned after jumping into a Yellowstone National Park hot spring to rescue her dog has so far raised more than $58,000 for her medical expenses.

Shelly Fyant, chair of the Confederated Salish and Kootenai Tribes, speaks during a gathering Monday for Indigenous Peoples Day at the Missoula County Courthouse.

About 150 people gathered at the Missoula County Courthouse on Monday to celebrate Indigenous Peoples Day.

People attending the rally on Monday listen to speakers at the Missoula County Courthouse.