After smaller companies seeking federal money for broadband expansion across Montana were critical of an initial application ranking report that indicated nearly half of the first round of awards could go to the largest telecommunications provider in the state, the applications and how they were rated will get another look.

During a Monday meeting of the advisory committee formed by the Legislature to decide how to spend millions of dollars from the American Rescue Plan Act, chairman and state Sen. Jason Ellsworth made an unopposed motion to give state ARPA Director Scott Mendenhall full access to all the applications and the ability to review how they were scored the first time around. 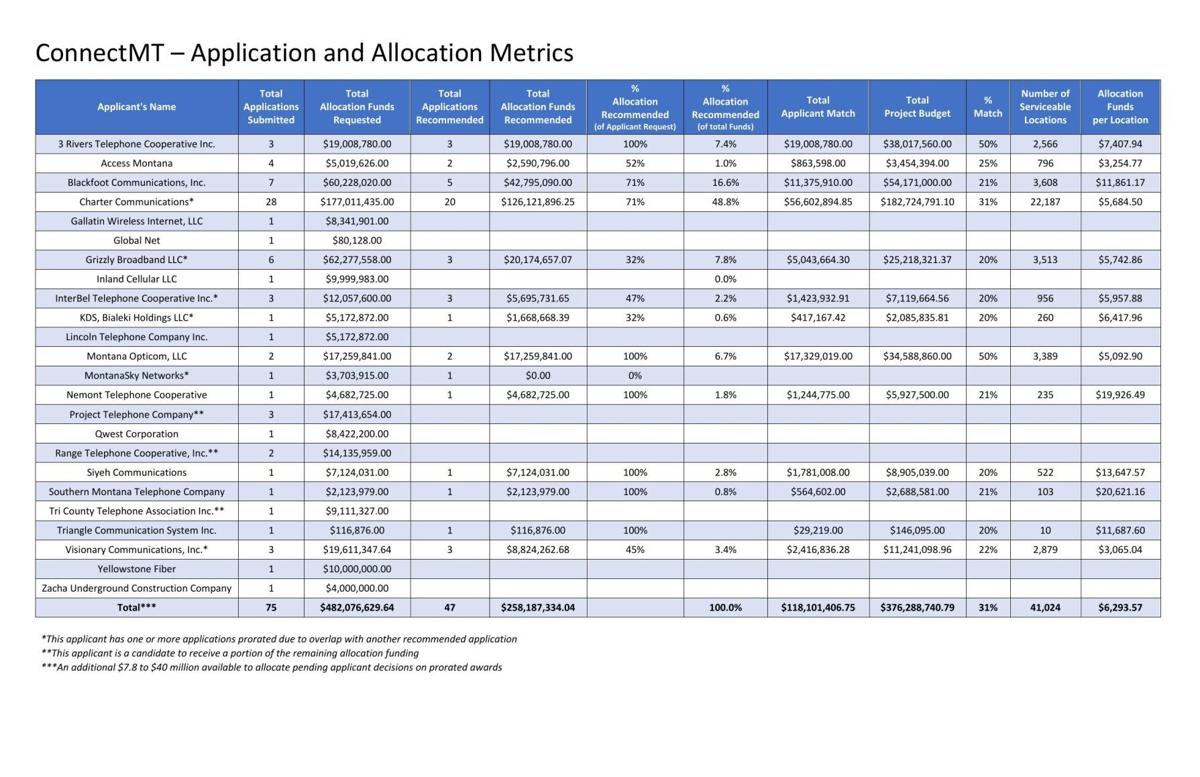 The commission forwards recommendations to the governor for approval.

“After careful consideration and after all the public comment and as we did state before, this was preliminary scoring,” Ellsworth said. “To be clear, scores are preliminary at this point and will be coming final as soon, as timely, as possible.”

The Montana Free Press reported earlier this month that smaller broadband and telecommunications providers in Montana were frustrated with the initial scoring, which was released in August.

Several providers who spoke at Monday's meeting reiterated their concerns. A representative of Charter, however, cautioned against changing the rules for how applications could be graded after they were submitted.

Bridger Mahlum, with Charter, said if applications were double-checked, he wanted all to be treated the same and ones from companies with concerns or complaints not given different attention.

Mahlum also told the committee incorporating any information provided outside of an application would make the process convoluted. He added he had concerns that some providers might now say they are able to do more things than they could in their initial application.

Jon Metropoulos, who spoke on behalf of Tri County Telephone Association and Gallatin Wireless Internet, called the argument the commission was changing any rules about how applications were reviewed “spurious.”

“You have the discretion to do this,” Metropoulos told the committee. He said Charter “clearly has far more resources” to help with their applications and that the point of the program was to create a competitive market in Montana and to support small businesses.

Neither company Metropoulos spoke on behalf of had their applications ranked for funding.

Lowell Feldman, with Inland Cellular, said his company thought there was an error with how their application was scored and that they haven’t been able to reach anyone with the state to discuss it.

Feldman said he felt it was “good policy to consider the strength of the applications as far as what Montana is going to be getting for the dollars it’s spending,” adding that his company's project would serve 15,000 households — a number he argued was more efficient than other projects.

That efficiency, he said, had no impact on the scoring matrix and he called it “bad public policy” to not take it into account.

Inland's application was not recommended for funding.

Ellsworth made clear the review of applications would not be a “rescore” and that the state would not be taking additional information from applicants.

Mahlum also urged the commission to balance “making sure this is done the right way versus the practical thing of how long this takes.”

He said projects are “shovel-ready but may not necessarily be snow-shovel ready.”

“Please be mindful that taking too long on this could come at the expense of delayed projects,” Mahlum said.

Col. Steve Lavin, head of the Montana Highway Patrol, said in a press release troopers had seized 12,079 fentanyl pills as of March 15, up from about 3,800 last year.

The money comes from the federal government through the American Rescue Plan Act.

“ ... The way you keep your huckleberry patch secret is you don't, say, file it (with) a government agency."

Some Republican legislators want to return part of an estimated $1 billion surplus to taxpayers, while others want to spend the money offsetting future spending obligations.

New law aimed at ensuring veterans can use G.I. Bill to attend college

Last year schools across the country and in Montana raised concerns about how the U.S. Department of Veterans Affairs was interpreting what's known as the 85/15 Rule.

Amtrak is pre-emptively canceling the Empire Builder service that runs through Montana starting Tuesday because of concerns over a possible strike by freight rail workers.

The news came as unions and freight rail companies announce they've reached a tentative deal in a labor dispute.