The state of Montana has spent at least $119,000 in the past nine months defending against legal challenges to laws passed during the 2021 legislative session, according to state government reports.

But that's likely an undercount of the actual amount of public funds used to defend against lawsuits seeking to overturn new laws — ranging from abortion restrictions to limits on how and where college students can engage in political activities.

All of the laws under legal challenge were brought by Republicans in the state’s GOP-dominated Legislature, and their final passage fell largely along party lines. For the past 16 years, similar proposals that advanced from the two chambers met the veto pens of Democratic governors. But with the 2020 election of Republican Gov. Greg Gianforte, many of those long-awaited GOP priorities were signed into law this spring.

The legal bills being racked up by the state are a natural result of that dynamic, said Kyle Schmauch, a spokesman for the state Senate Republican caucus. The 2021 Legislature passed 707 bills that made it into law, which he said was the most since at least 2003.

“That includes Republican lawmakers' top economic priorities affecting Montanans' lives on a day-to-day basis, including tax reform, tax relief, regulatory reform, health care reform and education reform,” Schmauch wrote in a statement. “None of those top priorities are being litigated. Republican lawmakers are proud that the 2021 session was a historic success for Montanans.”

For Democrats, who repeatedly argued in committee hearings and on the floors of the House and Senate that many of the Republicans’ more controversial proposals would mire the state in lengthy court challenges, the amount of legislation being litigated demonstrates fiscal irresponsibility.

Rep. Ed Stafman, a Bozeman Democrat, was a member of the House Judiciary Committee that debated many of the bills now tied up in the courts. One bill he warned against at the time was House Bill 102, which legalized the carrying of firearms on college campuses without a permit. Stafman said then that the authority to set such policies is explicitly reserved to the state university system’s Board of Regents.

That bill “was from the start unconstitutional, and as I recall, (Republicans) were warned of that by Legislative Services at the time, and essentially didn’t care because it was, for some folks on the other side of the aisle, it was more important to feed their base.”

The bulk of the estimated legal bills for the state, $91,500, comes from a memo prepared by Montana’s Legislative Audit Division after an analysis of the state’s costs was requested by Rep. Jessica Karjala, a Billings Democrat. The memo was first reported by the Daily Montanan. It only includes funds spent by the Department of Justice, and doesn't include five lawsuits challenging recent legislation.

Legislative Audit Division Director Angus Maciver, who prepared the memo, said in an email that the division’s request of costs from DOJ used a list of cases put together by the Legislative Council, a committee of lawmakers that provides oversight of the branch. Karjala’s is the only such request the division has received for estimated legal costs, he said.

The estimate is based on a reported 1,607 hours spent by DOJ attorneys working on 11 cases related to legislation signed into law earlier this year. The attorneys’ hourly rate for most of that time was $57, according to the memo. It also included additional estimates for three cases not directly related to any new laws.

Along with the legislative memo, a fiscal update prepared earlier this month reported that the Secretary of State’s office had spent $37,000 of a $100,000 appropriation added to its budget to defend against expected challenges to new election-related laws.

Three of those cases, with a combined price tag of $11,628, were listed among the DOJ’s legal costs. It’s unclear whether any portion of the $37,000 spent by the secretary of state’s office was reimbursed to DOJ and thus included in the memo's estimate. Jacobsen has hired outside attorneys to help defend the election laws, in addition to her office’s legal staff and lawyers from DOJ.

Jacobsen’s office did not respond to a request for that information, and the legislative staffer who prepared the fiscal report didn’t respond to an email seeking clarification. Maciver, with Legislative Audit, said he didn’t know if the DOJ costs included any dollar amounts reimbursed from other agencies.

A total of 16 cases have been filed this year in response to 2021 legislation, most of which name Gianforte, Jacobsen or Attorney General Austin Knudsen as defendants.

The state Labor Department has spent $2,200 so far to defend against two legal challenges to Montana’s new vaccine discrimination law that prohibits vaccine mandates by employers, a spokeswoman said Thursday. Neither of those cases were included in the Legislative Audit memo.

The Department of Public Health and Human Services and the Commissioner of Political Practices have also been named in lawsuits. Emails to those agencies asking whether they had racked up additional legal costs from those cases were not returned Thursday.

Of the cases identified in the DOJ estimate, the most costly to date has been the Board of Regents’ case challenging HB 102, the bill allowing guns to be carried on college campuses. A state district court judge sided with the board in a November decision, but the DOJ has since appealed that ruling to the Montana Supreme Court. The department’s legal costs exceed $17,500 so far.

Also tallying more than $17,000 in defense legal costs is a case brought by Planned Parenthood and several other plaintiffs, challenging four new laws that restrict access to abortions in the state. Three were put on hold by a state district court judge, although that injunction has also been appealed by DOJ to the state Supreme Court. DOJ attorneys have also charged more than $15,000 to defend a law that makes it harder for transgender people in Montana to have their birth certificates altered to update their sex.

The only case that has thus far been decided by the courts is a lawsuit that sought to overturn a law that dissolved the state’s Judicial Nomination Commission in favor of giving the governor direct appointment power when judicial vacancies arise. The law was upheld by the state Supreme Court after the DOJ spent more than $10,000 defending it.

A number of the bills now being challenged in courts were accompanied by legal notes after they were introduced, which the state Legislative Services Decision produces if legal staff determine the language of the bill could create legal issues. A rule change in the 2019 session brought by a Republican blocked the posting of legal notes along with bills on the Legislature's online bill tracker; they are only posted now at the bill sponsor's request.

Stafman, the Democratic lawmaker, argued that just goes to show the state Republicans’ prioritization of hot-button issues over the Montana Constitution.

“Time and time again, legislative lawyers reviewed these bills and warned that they may very well be unconstitutional," he said. Referring to GOP lawmakers, he added, "It’s not that they didn’t know, it’s simply that they didn’t care.”

Speaking for Republicans in the Legislature, Schmauch rejected that logic.

Schmauch added, “The vast majority of the litigation is coming from the same small group of liberal partisans who are trying to advance their unpopular political goals through the courts.”

The policy has delivered $1,200 checks to about 3,000 workers while drawing controversy for putting an early end to expanded unemployment benefits.

Democratic President Joe Biden has sought to wield federal agencies and funding to bolster the United States' stagnant rate of vaccinations against the coronavirus.

Secretary of State Christi Jacobsen's announcement follows concerns by local elections officials that bugs in the new software could cause problems during the 2022 elections.

The total number of employed Montanans has continued to climb since the early months of the COVID-19 pandemic.

Jacobsen: New statewide voter system will be postponed if issues aren't fixed by next week

The Secretary of State said her office would decide Dec. 20 whether to replace the current system with the new "Elect MT" software.

Montana was one of two dozen states that sued over the vaccine requirement.

Banner Lee Boyd, 44, remains imprisoned on a 10-year sentence for assaulting a Miles City police officer on the night he was kicked out of a bar in July 2018.

Justice Jim Rice said the decision to announce his candidacy on Jan. 6 — anniversary of the attack on the U.S. Capitol by supporters of then-President Donald Trump — wasn't accidental.

The governor argued in a brief filed with the U.S. Supreme Court that judges’ participation in polling on proposed legislation undermines the branch’s impartiality.

Arguing that the changes will irreparably harm the voting rights of Native Americans living in Montana, the plaintiffs are asking for an injunction. 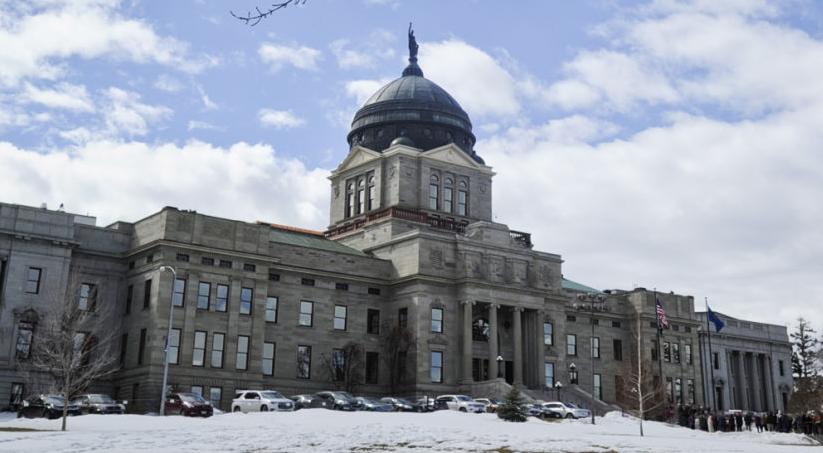 The Montana state Capitol is pictured in December of 2019.