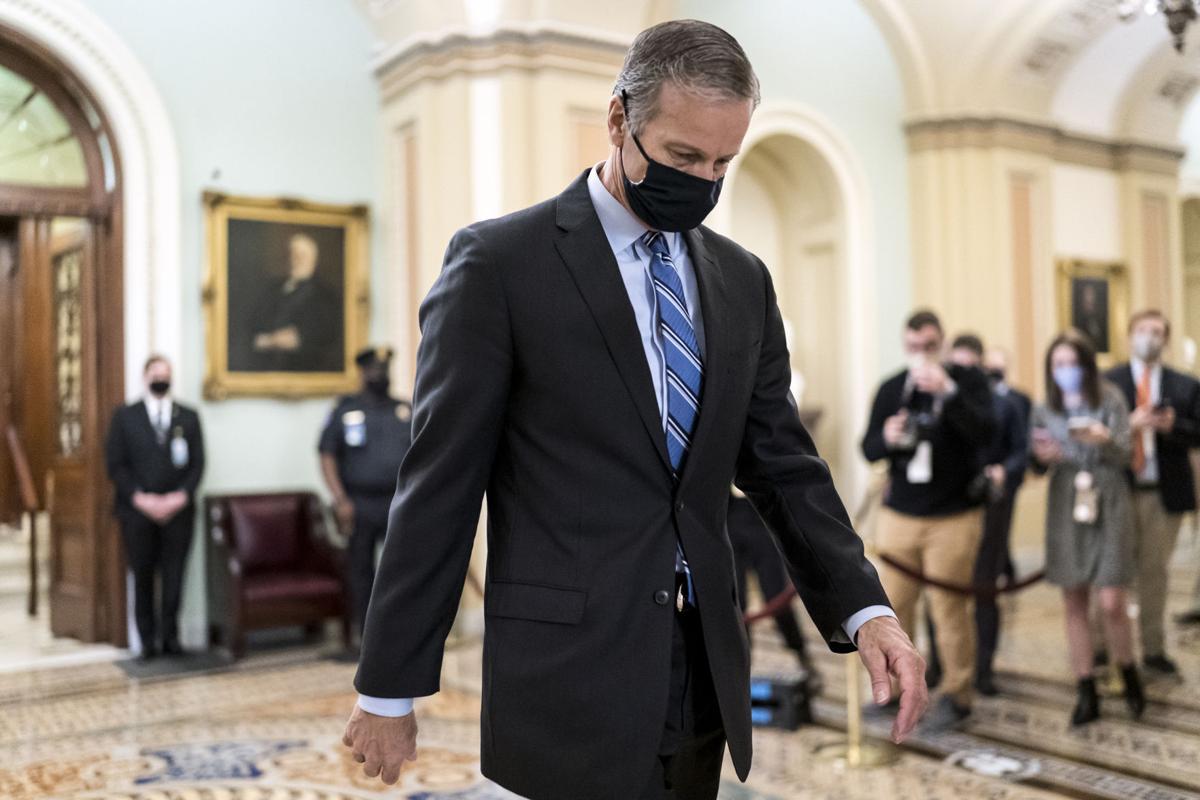 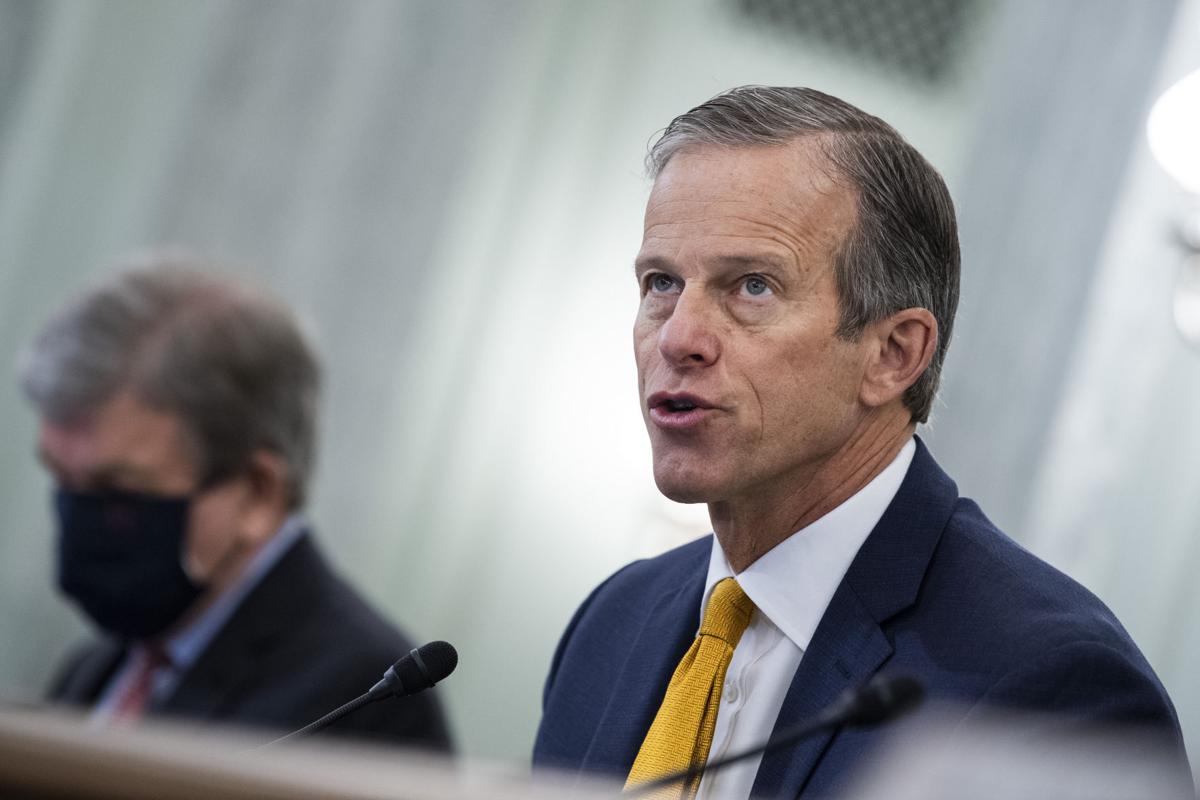 FILE - In this Jan. 26, 2021, file photo, Sen. John Thune, R-S.D., speaks on Capitol Hill in Washington. In an interview with The Associated Press, Sen. Thune, the chamber's No. 2 Republican, likened Trump's insults of Minority Leader Mitch McConnell to "food fights within the family," saying they hurt the Republican party's goals. Thune also talked about his vote to acquit Trump of inciting the attack on the U.S. Capitol that left five people dead. (Tom Williams/Pool Photo via AP File)

In his first interview since he voted to acquit Trump, the Senate's No. 2 Republican on Thursday defended fellow Republicans who sided with Democrats on the "vote of conscience" and warned against shutting out dissenting voices in the party. He also discussed Republicans' priorities under President Joe Biden, the proposed $1.9 trillion coronavirus relief package and upcoming primary battles within his own party.

"There was a strong case made," Thune said of the Democrats' impeachment presentation last week. "People could come to different conclusions. If we're going to criticize the media and the left for cancel culture, we can't be doing that ourselves."

Thune's remarks were his first explaining his vote in Trump's trial and assessing the turbulent GOP politics the former president has left behind. Thune, who faces reelection next year, is among several establishment Republicans grappling with how to reclaim control of a party dominated by Trump for years.

The senator rarely criticized Trump while he was in office, but he called the former president's post-election actions "inexcusable" and accused him of undermining the peaceful transfer of power.

Still, Thune sided with most Republican senators and GOP Senate leader Mitch McConnell in voting to acquit. Thune and others argued that Trump could not be impeached because he was already out of office. Democrats fell 10 votes short of the 67 need to convict.

Since then, Trump has lashed out at McConnell and repeated the baseless claim that he won the election. The comments have inflamed a feud that is likely to play out in GOP primaries between Trump-backed candidates and those supported by the establishment wing.

Thune suggested he would be taking steps to assist candidates "who don't go off and talk about conspiracies and that sort of thing." He praised Rep. Liz Cheney — a Wyoming Republican, who was censured by the Wyoming GOP for voting to impeach Trump — for doing an "exceptional job on most issues," and said he was ready to jump into primary battles like the one she is sure to face.

"At the grassroots level, there's a lot of people who want to see Trump-like candidates," he said. "But I think we're going to be looking for candidates that are electable."

Despite the escalating fight over control of the GOP, Thune said he believes Republicans are well-positioned to take back the Senate, citing policy overreach by the Democrats.

Thune suggested that suburban voters — a crucial group that slipped away from Trump in the 2020 election — will not necessarily support Democratic Party priorities, such as statehood for Washington, D.C. and Puerto Rico, rolling back tax cuts, the Green New Deal, cancellation of the Keystone XL pipeline permit, and delaying the full reopening of schools.

"They are in the process of overreaching. If they overreach, we're in position to bring it back," he said.

Thune said Biden "left to his own devices would govern in the middle," but that he is under pressure from the more progressive wing of the party to enact aggressive changes.

"The energy, the intensity, the financial resources in their party is all on the far left," he said.

Republicans will try to hit Democrats on "pocketbook concerns" such as economic policy, fiscal responsibility in government, as well as "strong borders" and a tough China foreign policy, Thune predicted.

But before Republicans can challenge Democrats on ballots, a fight over Biden's $1.9 trillion coronavirus package looms. Thune, who holds the job of mobilizing votes in the Senate, has said there would be little appetite for a package that large. But the senator suggested that there are some Republicans who would support a lower amount, especially as a bipartisan group of governors and mayors has been pushing for economic help.

He said, "I'm not there," on Biden's price tag, adding: "When we're spending money right now, every dollar is borrowed."

In his 2016 campaign, the governor called on his opponent to sell the state's aircraft.

Lawmakers aiming to shape wildlife management in Montana are advancing a number of bills this legislative session that some believe would be better debated by the Montana Fish and Wildlife Commission.

House Bill 568 would limit dispensaries to one per 1,000 county residents with a cap of 10 dispensaries per county.

The bill, brought by Republican Rep. Derek Skees, got its first hearing Thursday in the House State Administration Committee.

All the Senate Republicans backed Senate Bill 100, while all Democrats opposed it in a 31-19 vote.

The Montana Senate on Thursday in party-line votes gave initial approval to four bills that would change access to abortions in the state.

Bill would open Montana to hound hunting for black bears

Currently, black bears may only be hunted via spot-and-stalk hunting in the state during spring and fall seasons.

In a session that’s seen its fair share of hotly debated policy bills, Monday had its own decent load.

FILE - In this Jan. 26, 2021, file photo, Sen. John Thune, R-S.D., speaks on Capitol Hill in Washington. In an interview with The Associated Press, Sen. Thune, the chamber's No. 2 Republican, likened Trump's insults of Minority Leader Mitch McConnell to "food fights within the family," saying they hurt the Republican party's goals. Thune also talked about his vote to acquit Trump of inciting the attack on the U.S. Capitol that left five people dead. (Tom Williams/Pool Photo via AP File)