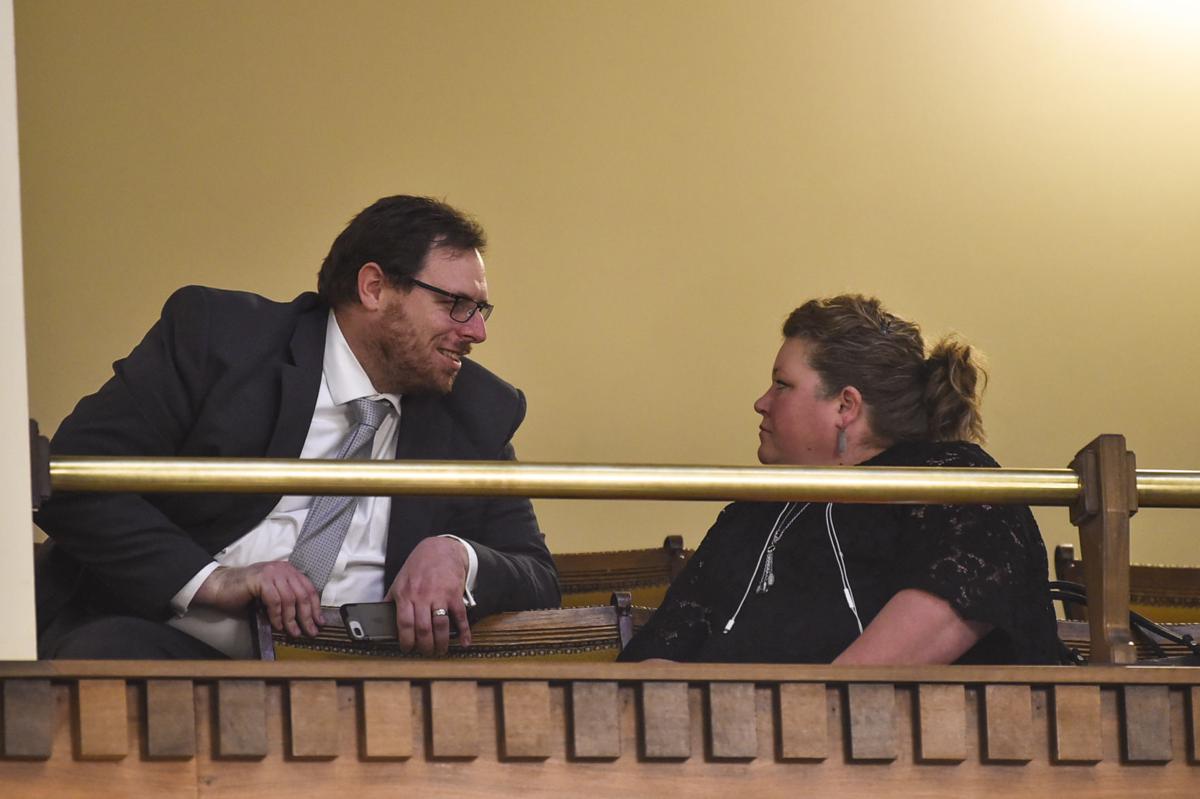 Judge Chris Abbott talks with his partner Jen Gursky after being confirmed by the Senate on Thursday, April 29, 2021. 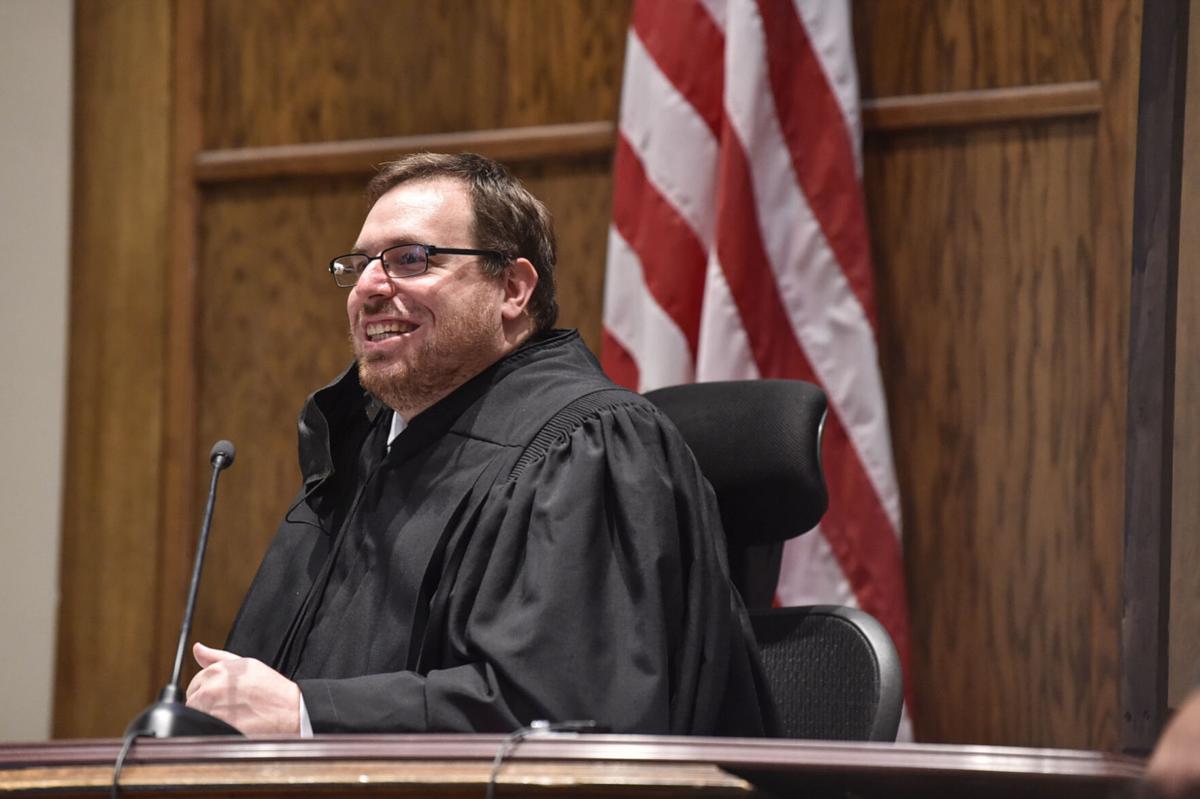 Twice on Thursday lawmakers voted down his confirmation, first in committee and then again on the Senate floor. But after Democrats reversed course on another bill limiting the state's liability when someone falls ill with COVID-19, Republicans later gave way and confirmed Abbott on a 27-23 vote.

"I haven’t slept a lot the last couple days," Abbott said after the final vote. "I knew it was going to be close. I understand this issue ... in a lot of ways has been bigger than me throughout the whole session."

The day began with the GOP-controlled Senate Judiciary Committee voting to reject his confirmation, sending that decision onto the full Senate. The chamber had already rejected one of the three judges former Democratic Gov. Steve Bullock appointed last year, a group that included Abbott.

Abbott had no political background, having served as an attorney for the state in multiple capacities. He had, however, engaged in an email poll on pending legislation that was made public by the Republican Attorney General's Office in court and fueled outrage by Republicans in the Legislature. The poll surfaced as part of a lawsuit filed this session over a bill passed to give the governor direct appointment power over judicial vacancies.

When the Senate tied on a vote to accept the committee's report rejecting Abbott, that opened the door for a motion to blast his nomination to the full chamber for consideration. That came after Sen. Ryan Lynch, a Butte Democrat, chastised lawmakers for their willingness to throw the judge out because of an email.

"When you fire the man, you fire his family," an emotional Lynch said on the Senate floor.

Abbott, meanwhile, sat in the gallery watching the Senate as he had in recent days. Abbott sought to mitigate any concerns with individual lawmakers in person as the session dwindled down.

After the tie-vote, Abbott's confirmation sitting idle, Sen. Bryce Bennett, D-Missoula, called for a second debate on the resolution, getting a 27-23 vote.

Directly after the Senate voted to reconsider Abbott's confirmation, Majority Leader Cary Smith called for the Senate to also reconsider House Bill 435, a bill to shield state agencies from lawsuits related to the coronavirus pandemic. Because the proposal limits the government's own liability, it requires approval by two-thirds of each chamber, or 33 senators. The bill mustered enough support in the House earlier in the session.

Eleven Democrats in the Senate voted to approve HB 435 on Thursday, giving it the margin with 31 Republicans to pass its constitutional requirement. Moments later, after a brief debate on the Senate floor, eight Republicans joined Democrats to confirm Abbott's confirmation.

"What changed I think was the humanity," Lynch said in a Thursday evening press conference. "Judge Abbott came and spent some time with folks and really had some frank conservations people. At the end of the day, they understood that he was the best man for the job."

Abbott said after the hearing he understands Republicans' concerns: Bullock appointed him in the waning months of his administration and the First Judicial District in Lewis and Clark County has traditionally been the first to hear challenges to any state agency or law.

Republican lawmakers have gone on offense this session with their efforts to alter the judiciary. Republican leadership and rank-and-file lawmakers alike have spoken about trying to yank the courts to the right from a perceived lean to the left.

"As a Republican, I would like to see a conservative on the court," Sen. Terry Gauthier, a Helena Republican, told the Senate during Abbott's confirmation hearings.

Republicans on Thursday also delivered on Senate Bill 402, which would re-establish the Judicial Nomination Commission if the Supreme Court strikes down Senate Bill 140, the bill that abolished that panel and gave Republican Gov. Greg Gianforte direct appointment power over judicial vacancies. The replacement bill would create a supermajority of laypeople picked by the governor on the panel. The bill also passed with a set of amendments to bar judges who engaged in any public discourse about the constitutionality of a bill from presiding over a case challenging that bill — the exact issue over which Republicans formed a committee this month to investigate the judiciary.

The Select Committee on Judicial Transparency and Accountability met again Thursday for a public hearing on its initial report. Democrats on the committee accused the GOP members of heading down a road toward impeaching the Supreme Court, while some of the members of the public who appeared Thursday to support the committee's inquest themselves suggested impeachment.

"I think that's premature," Republican Sen. Greg Hertz, R-Polson, said after the hearing. "We really haven't gotten all the information that we want so we need to continue to look at where this might take us."

Lawmakers during the morning hearing spoke briefly on the report's contents contents before granting public comment, all of which supported the Republicans' efforts to probe the judicial branch on allegations of judicial bias. Several people who spoke urged more citizen oversight over the judiciary.

"We civilians are not goofy or so stupid we cannot as a judicial standards commission call a judge out on their egregious rulings," Raye Newmeyer said, who testified Thursday with her husband, Keith.

The Newmeyer couple in 2018 challenged a lower court ruling terminating their parental rights to Montana Supreme Court only to see the lower court's decision affirmed. In January 2020, the U.S. Supreme Court declined to hear their case. According to court filings, the adoptive children were removed from the Newmeyer's care in 2015 after allegations of physical abuse and neglect. The Newmeyer's challenged the removal and claimed the subsequent parenting plan violated the father's rights.

The committee also got the support of Rep. Derek Skees, a Flathead Republican who announced Thursday his bid for the Public Service Commission, the Daily Inter Lake reported.

"If something's wrong don't we want to figure it out that way you can prove that it's right or wrong?" Skees told the committee.

House Minority Leader Kim Abbott, no relation to the judge, and Sen. Diane Sands, the two Democrats on the committee, continued to dig their heels in against its momentum. Sands said the committee should hand its concerns over to the Judicial Standards Commission, a panel enshrined in the Constitution to serve as oversight of the judiciary. Abbott said the lobbying efforts through the Montana Judges Association have been a longstanding part of the Legislature and Republicans are mischaracterizing them to fit the party's narrative.

"From my perspective it takes longstanding non-controversial practices and blows them up into some manufactured scandal," Abbott said.

Judge Chris Abbott talks with his partner Jen Gursky after being confirmed by the Senate on Thursday, April 29, 2021.