In court filings defending new laws to end Election Day registration and tighten voter ID requirements, the Secretary of State’s office derided the Montana Democratic Party's lawsuit as “a last-ditch effort to do what it couldn’t do at the ballot box or before the Legislature.”

That lawsuit, filed in Yellowstone County District Court by the Democrats in April, was amended last month to also challenge a third law that created new restrictions on ballot collection. The motion to dismiss the Democrats’ complaint, filed last week by Republican Secretary of State Christi Jacobsen, doesn’t address claims related to that law.

Attorneys representing Jacobsen argue the party lacks standing to pursue its claims against the new laws, and maintain that lawmakers were well within their role in shaping the state’s election processes under the Montana Constitution.

House Bill 176 ends the state’s practice of allowing residents to register to vote on Election Day, moving the deadline back to noon on the preceding Monday. Senate Bill 169 makes photo identification mandatory to vote in person, while tightening other voter ID requirements and requiring that student IDs be accompanied by a second form of identification. Both were top priorities of Jacobsen and passed on mostly party-line votes during this year’s legislative session.

Arguing that the end of Election Day registration will ease the burden on election officials, the brief supporting Jacobsen's motion to dismiss argues that at the time the state Constitution was ratified in 1972, voter registration closed 30 days before Election Day for federal elections.

And in response to Democrats’ contention the voter ID law unfairly singles out college-age voters, the brief notes that college IDs are “issued as a matter of course to postsecondary students, regardless of residency.”

“Student IDs are easier to forge; students often attend school away from their home state; and state, federal and tribal governments to not necessarily determine the process for issuing student IDs,” the brief states. 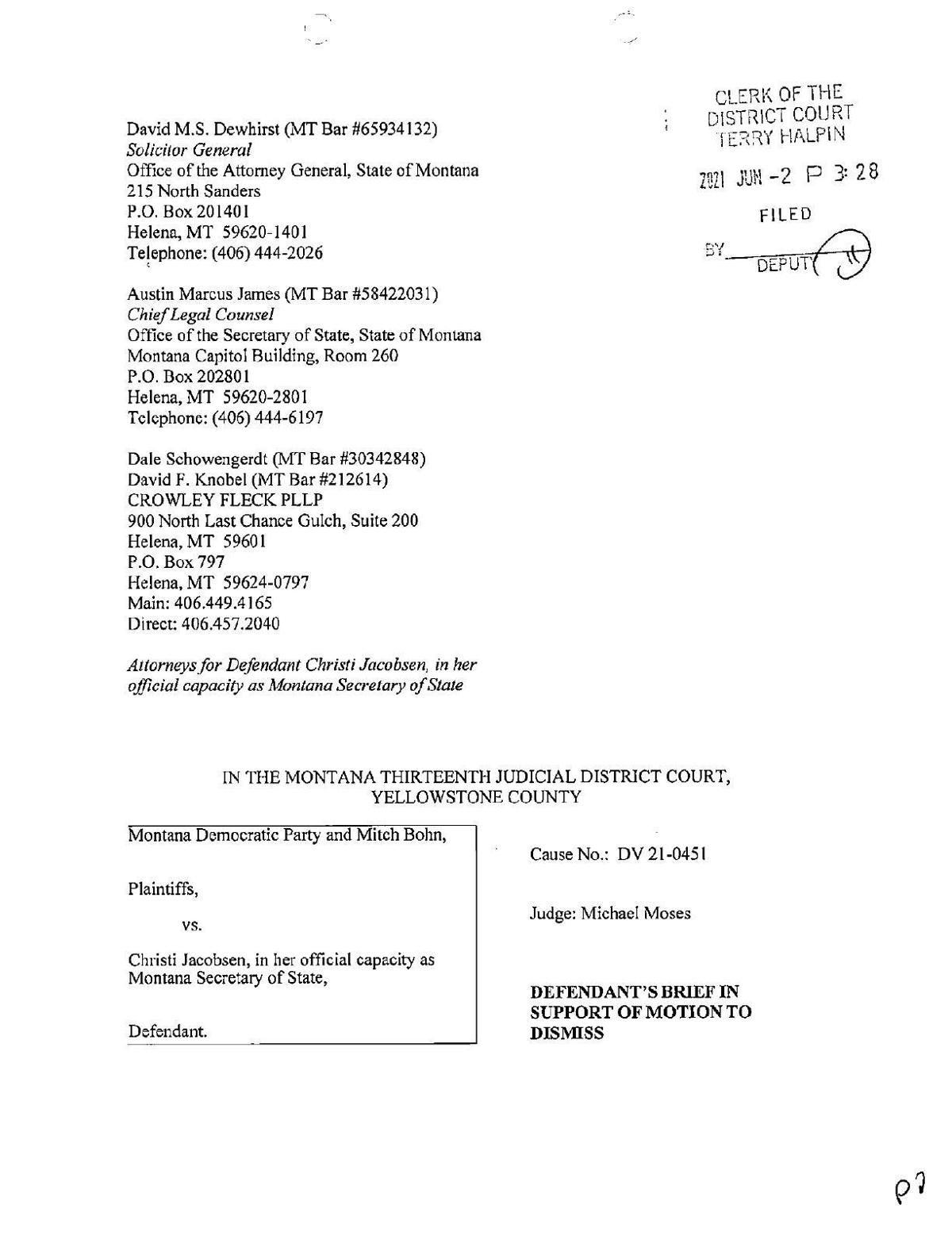 Democrats last month amended their initial challenge to include ballot collection restrictions in House Bill 530, which they argued will unconstitutionally burden voting access for seniors, students, people with disabilities and Native Americans. The amended complaint also added Mitch Bohn as a plaintiff. Bohn is a Billings resident who uses a wheelchair, according to the complaint, which alleges that the law creates new barriers for him to cast his ballot in future elections.

It’s unclear if the state also intends to defend the new restrictions on ballot collection. Phone calls to Jacobsen’s office and the offices of attorneys representing her were not returned on Wednesday.

During the recent legislative session, Jacobsen and other Republicans repeatedly invoked the need to bolster the state’s “election integrity,” while acknowledging that there is no evidence of any coordinated or widespread attempts at voter fraud in Montana’s recent history.

The only documented case of attempted voter fraud in Montana during the last election involved a Gallatin County man who registered to vote under a phony name because he “wanted to prove how easy it was to commit voter fraud,” the Bozeman Daily Chronicle reported. The man pleaded guilty to a misdemeanor earlier this week, with the judge noting that the case “demonstrated that the system does work.”

The Secretary of State’s response to the lawsuit also takes a couple shots at Montana Democrats’ substantial electoral defeats in 2020, noting in the first paragraph of the brief that Jacobsen beat her opponent by a nearly 20% margin and referring to “sweeping statewide losses for MDP-backed candidates.”

A separate lawsuit, filed in Yellowstone County District Court by four Native American tribes and a pair of Indigenous rights groups, is also seeking to overturn the voter ID and ballot collection laws. It also names Jacobsen as the sole defendant. Her office had yet to file a response to that lawsuit as of Wednesday.

The meeting of the state Districting and Apportionment Commission provided one of the first public glimpses of how the partisan debate will shake out over the next few years.

Scary to think of dead voters

Thank goodness the Legislature passed and the governor has signed a law to stem the tide of dead people voting in Montana!