As the June primary election draws near, the two frontrunner candidates in a state Supreme Court race continue to accuse the other of political alignments that could cast doubt on their impartiality on the bench.

A week earlier, Brown was speaking at a GOP forum in Butte when he offered to the crowd one of the people who urged him to run in the first place.

“In February, I’m pleased to say that the governor of the state of Montana called me and asked me to consider running for the Supreme Court of Montana,” Brown said. “The governor’s theory was that what we’re seeing in Montana is we’re seeing the court systems acting as a ‘shadow legislature.’”

For over a year now the GOP has openly regarded the courts as stacked with liberals, as the courts have put the brakes on ambitious Republican-backed policies. Gianforte, U.S. Sen. Steve Daines and Montana Attorney General Austin Knudsen, all Republicans, and the state Republican Party have endorsed Brown.

Both Gustafson and Brown still work to keep politics at an arm's length through their political messaging. In his campaign ad, Brown states as an attorney, "I believe we deserve impartial and independent courts." Gustafson's campaign ad asserts there's "no room for politics in the courtroom."

Yet both have still appeared publicly next to partisan leaders in recent months as they build support to push through the primary election.

In an email on Wednesday, Brown said he did not consider his vocal appreciation of Gianforte urging him to run afoul of the judicial conduct rules.

“I received calls from farmers, ranchers, and small business owners from across Montana asking me to step-up and run for the Montana Supreme Court,” Brown said in an email. “I was humbled to hear from them, as well as the Governor, as I weighed this decision.”

Gianforte has been a defendant in a handful of cases that have already reached the state Supreme Court. Asked if the governor's support for his campaign is enough to recuse himself from future cases in which Gianforte is involved, Brown said his only duty to the court would be to the constitution.

"That is what is required of me and that's how I will conduct myself on the court," he said.

A spokesperson for the governor's office on Wednesday said Brown was already considering a bid for the Supreme Court when Gianforte encouraged him to run.

"After hearing Jim Brown was considering running for the Supreme Court, the governor encouraged him to run, because Jim is an exceptional attorney who will interpret laws, not make them from the bench," spokesperson Brooke Stroyke said.

Brown, too, has cried foul on the incumbent. In April Gustafson held a fundraiser at Ten Mile Creek Brewery in Helena. Former Gov. Steve Bullock, a Democrat, was in attendance and was among the names listed on the event invitation. Bullock appointed her to the high court after 13 years on the District Court bench.

Asked why she would invite a well-known Democrat to a fundraiser for a nonpartisan candidate, Tim Warner, Gustafson’s campaign manager, said in an email, "He is a friend."

Through her campaign this week, Gustafson rejected any notion that politics have played a role in her time on the bench.

"Any allegation that the court or myself are motivated by political idealogue is a manufactured falsehood," Gustafson said. "There is a partisan effort afoot to weaken the judicial branch and remove it as a check and balance to the other branches of government."

Still, Democrats' proximity to the Supreme Court has given Republicans ammunition on the campaign circuit. The state GOP called Democratic outrage over its support of Brown a "hypocrisy" in light of the $60,000 Democrats spent in 2016 in support of Dirk Sandefur's Supreme Court campaign, who beat out now-Republican Lt. Gov. Kristen Juras.

“There is a wingnut guy that’s running against (Gustafson), his name’s Jim Brown,” Wheat said. “She needs our help. … We have to get out, we have to support her and we have to ensure that she stays on the Supreme Court, because they (Republicans) are looking to take it over.”

In the event Brown wins, however, the addition of an ideological conservative would not alter the immediate course of the Supreme Court’s decisions, at least not yet, said Lee Banville, a political analyst and professor at the University of Montana.

“It happens over a series of appointments, or in this case, elections,” Banville said. “So if this works, if Republicans’ strategy of knocking off Gustafson works, I mean, yeah, they’re going to keep doing it.

“There’s one thing standing in the way from the Republican Party doing whatever it wants to do, and that is an independent judiciary deciding whether a law is constitutional,” he continued. “And if it stands in your way, try to change it. That’s kind of a natural thing of power politics.”

As for Gustafson's campaign inviting Bullock, a well-known Democrat to a Helena fundraiser, Banville likened the increasing partisan support to an arms race. The ramifications of politicizing the court, of creating the public perception that the courts are at the whim of the party in power, chips away at the purpose of having the nonpartisan branch of government, Banville said.

“Nobody had to inject pure political leanings into this race,” Banville said. “Is it surprising? No. But was it inevitable? No. It didn’t have to be like this.”

The third candidate for Gustafson's seat, Lewis and Clark County District Court Judge Mike McMahon, has had a far quieter campaign. While the partisan influences in the race have set the tone, McMahon has tried to keep politics at a distance.

"To me, the efforts made by special interest groups and partisan groups certainly supports the other two candidates," McMahon said Wednesday.

McMahon has traveled the state to campaign on weekends, he said, from Eureka to Ekalaka. He said people have reached out to him to find out more about his rulings and decisions. Republicans have painted his ruling in a recent case about campus firearm carry as a decision against the Second Amendment. McMahon in that case ruled that the state constitution gives the Board of Regents authority to regulate what happens on university campuses, not the state Legislature, which passed the law in light of legal advice that it might not conform with the constitution.

"I've learned there's a lot of uninformed voters out there and my goal is to reach out to them and inform them as best as possible why I'm running and why I think it's important," McMahon said.

McMahon has never run for a partisan office but records show he has contributed financially to Republicans, including Gianforte's 2016 unsuccessful run for governor. But he said he doesn't try to bring that up when talking with voters.

"That's a partisan issue and this race shouldn't be about partisans. That's all in the past," McMahon said.

The Commissioner of Political Practices database shows Gustafson, who has been a judge since 2004, has donated to four candidates, only one of which was partisan: Democratic gubernatorial candidate Mark O'Keefe in 2000. Brown, by contrast, has donated to 39 Republican candidates, according to COPP records.

The primary election is June 7.

Lawmakers in at least six other states have introduced legislation to prohibit the use of machines during elections, and at least one such bill draft has been requested for Montana’s 2023 legislative session.

The emergency rule, in response to and at odds with a District Court judge's ruling, enacted new restrictions on Montanans' ability to change the sex designation on their birth certificate.

The National Association for Public Defense, the Montana Innocence Project and ACLU of Montana have also entered the fray.

Gustafson with most votes, Brown also set to advance in SupCo race

The race between incumbent Ingrid Gustafson and challengers James Brown and Mike McMahon was one of the most hotly contested of the primary.

"I think the bigger question is how much money are the Republicans willing to spend for the election in November," political scientist Jeremy Johnson said.

Justice Ingrid Gustafson raised nearly a quarter-million dollars over the last two months in her bid for re-election, compared to roughly $93,000 raised by challenger and PSC President Jim Brown. 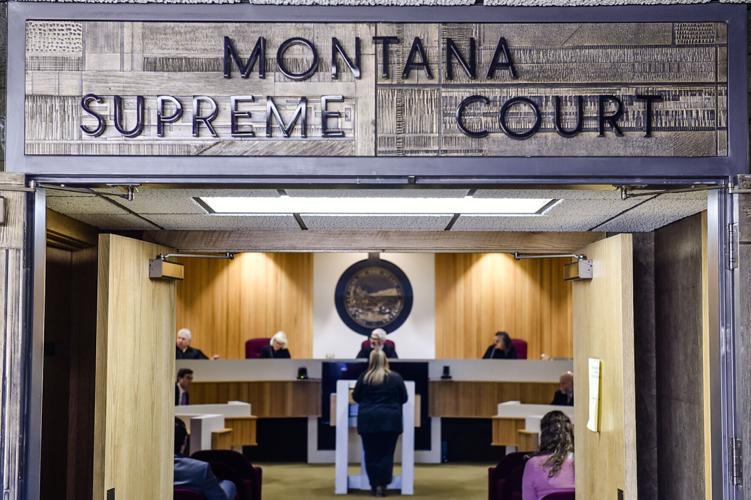 The Montana Supreme Court hears arguments in this April photo. 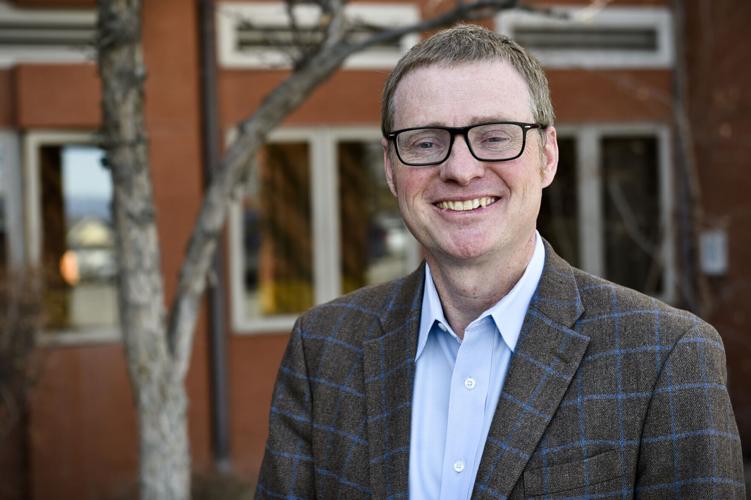 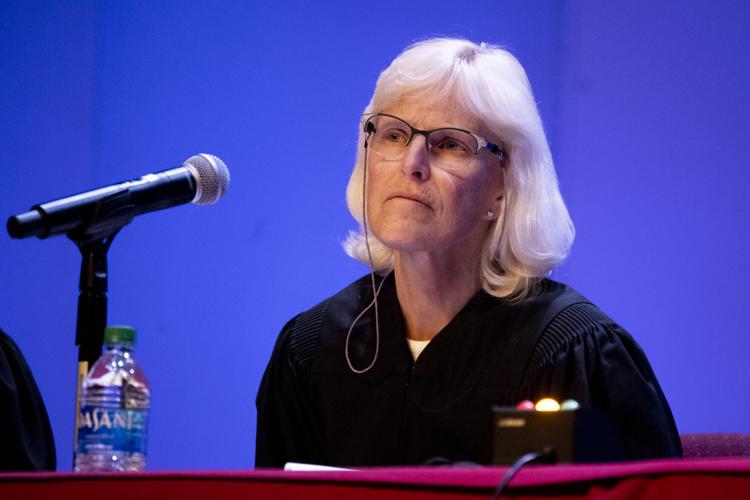 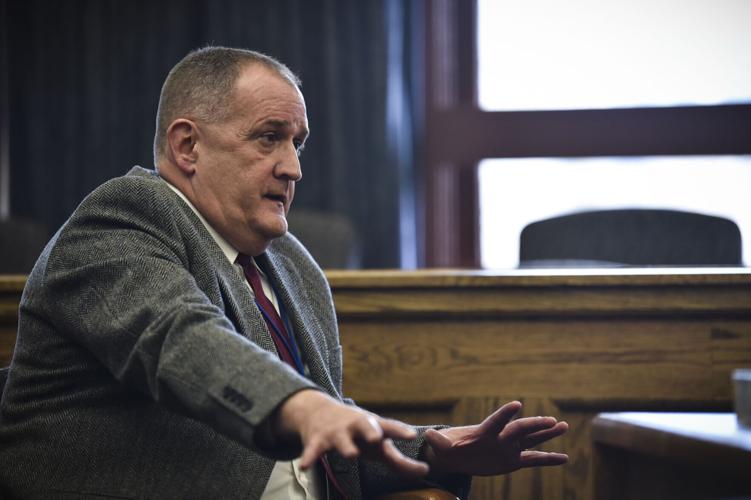