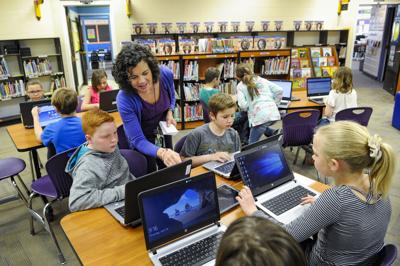 A group of educators and others heard strong opposition from librarians, counselors, parents and more about proposed changes that would allow Montana schools to have fewer librarians and counselors.

The group, a negotiated rule making committee, met Wednesday and its members will review recommendations from state Superintendent of Public Instruction Elsie Arntzen and a task force assigned to review current rules around education.

The group did not make any decisions Wednesday, citing in part a very condensed time frame and not enough capacity to review a large volume of public comments it received in recent days about the proposals.

Nearly 120 people attended the meeting virtually and several spoke in 30-second timeslots about their opposition to the proposals. No one spoke in support, except for one change emphasizing the inclusion of teaching students about the cultural heritages of Native Americans in Montana.

The suggested changes would require schools to have just a single counselor or contract for one. Districts could hire more if they chose to, but the change reflects a reduction in how many counselors would be required for larger schools.

Rules in place now dictate schools hire counselors based on student enrollment numbers and schools must have one full-time counselor per 400 students.

The proposal also suggests reducing the number of library employees for larger schools. The plan would require a single licensed library media specialist for schools of any size, or allow districts to use a consortium or cooperate to secure the service.

Under the current rules, the number of required library specialists is based on student enrollment, with three full-time positions required for schools with 2,001 or more students and fewer for smaller schools.

The rules also include changes to graduation requirements, reductions in certain arts curriculum and more.

Samantha May, of Joplin, said she is getting a Bachelor of Arts degree in psychology with a goal of returning to the Hi-Line to work with students. She said students need dedicated counselors and would suffer without them.

“I know the importance of having someone to support students, especially when in many areas the school counselor is the only mental health professional,” May said.

May and several others who spoke cited Montana's consistently worst-in-the-nation suicide rate. The Office of Public Instruction's own survey of students showed more than 40% of high school students reported feeling depressed in the 2021 school year and nearly 22% seriously considered suicide, with 10% making a suicide attempt.

Jessica Buboltz, a school counselor in Missoula and board chair of Montana School Counselor Association, said the committee should instead look to decrease the ratio of students to counselors to one counselor for every 250 students.

“We all know Montana students are experiencing higher levels of mental health issues than ever before,” Buboltz said.

Jamie Bawden, a school counselor in Helena, said kids have been struggling since long before the pandemic and need more support, not less.

Katey Franklin, a professor of counseling at Montana State University, called the proposal a “dangerous recommendation and ultimately a safety issue for Montana students.”

“Ninety-nine-point-nine percent of the time, school counselors are the only employees in the schools who have this specific training and skill set to recognize warning signs of suicide, assess and provide appropriate safety interventions,” Franklin said.

Rebecca Dupre, a teacher librarian in Missoula, said that nobody asked for the types of changes proposed.

“Montana families are not asking for these changes. We don't want to reduce access to our librarians, counselors and our important elective programs,” Dupre said.

“This is not what the School Quality Task Force recommended and voted on last week,” Schoening said, saying instead the changes came from Arntzen.

“When I saw these, I thought it must be a giant mistake to be honest with you, because this isn't anything what we've talked about as a committee,” Schoening said. “It's not what the School Quality Task Force has recommended, and so I would like to know what prompted these and why it's coming at this point.”

The task force is set to meet again Thursday and the negotiated rule making committee will meet next week, with a plan to come to consensus about the proposed rules by the end of June.

People who want to comment on the proposals can email Ch55PublicComment@mt.gov.

The plaintiffs who won a preliminary injunction blocking a new law governing how birth certificates are updated say the state is not complying with the judge's order.

The primary is June 7.

Democrats running in the primary for Montana’s western U.S. House seat agree its critical to address a warming world that’s changing the climate in ways that affect the state’s leading industries.

Communities in the newly drawn western U.S. House district include some of the hardest-hit when it comes to affordable housing.

The Superintendent of Public Instruction's plan is in some cases the "exact opposite" of what her task force suggested, one member of the group said.

With two and a half weeks left until the primary election, candidates squared off in a forum hosted by Gallatin County Democrats.

Helena police are investigating a report that Montana's Superintendent of Public Instruction Elsie Arntzen illegally drove by a school bus with its stop arm fully extended.

Montana’s Superintendent of Public Instruction Elsie Arntzen has been cited for allegedly driving past a school bus that was picking up children with its red lights flashing and stop arm down.

Watch Now: Disney caught in the middle of political firestorm over Florida law