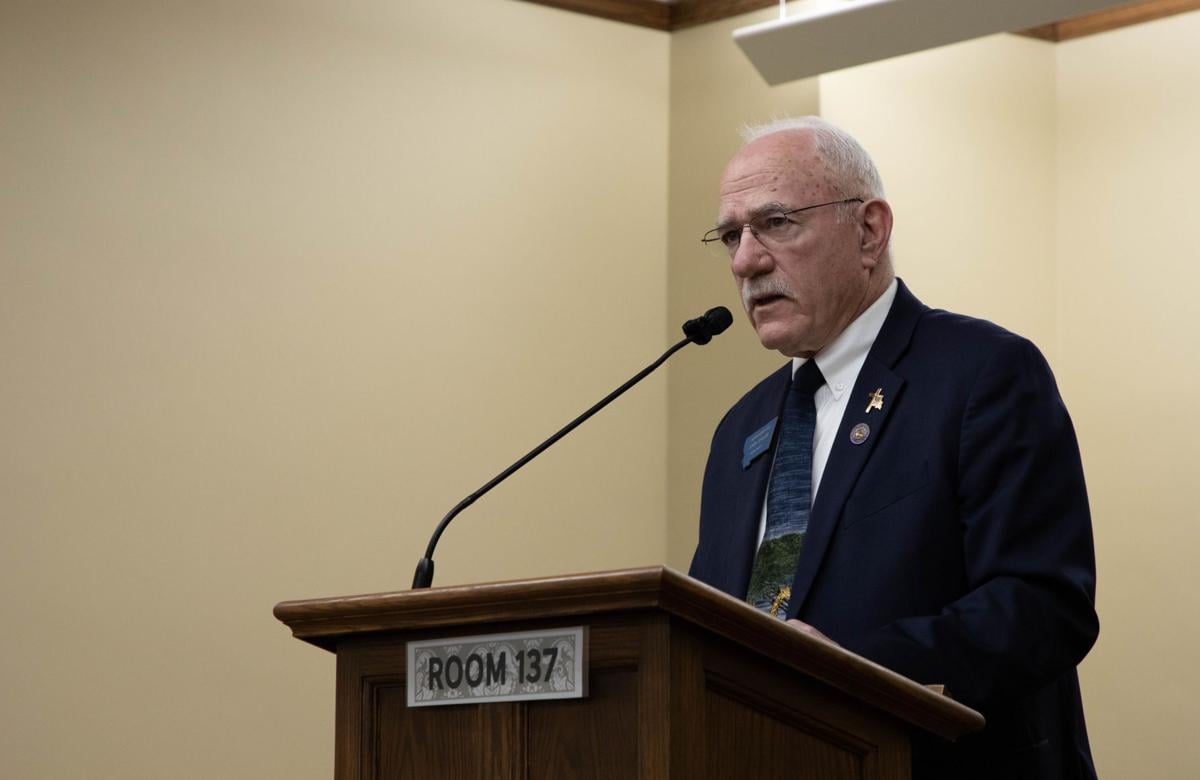 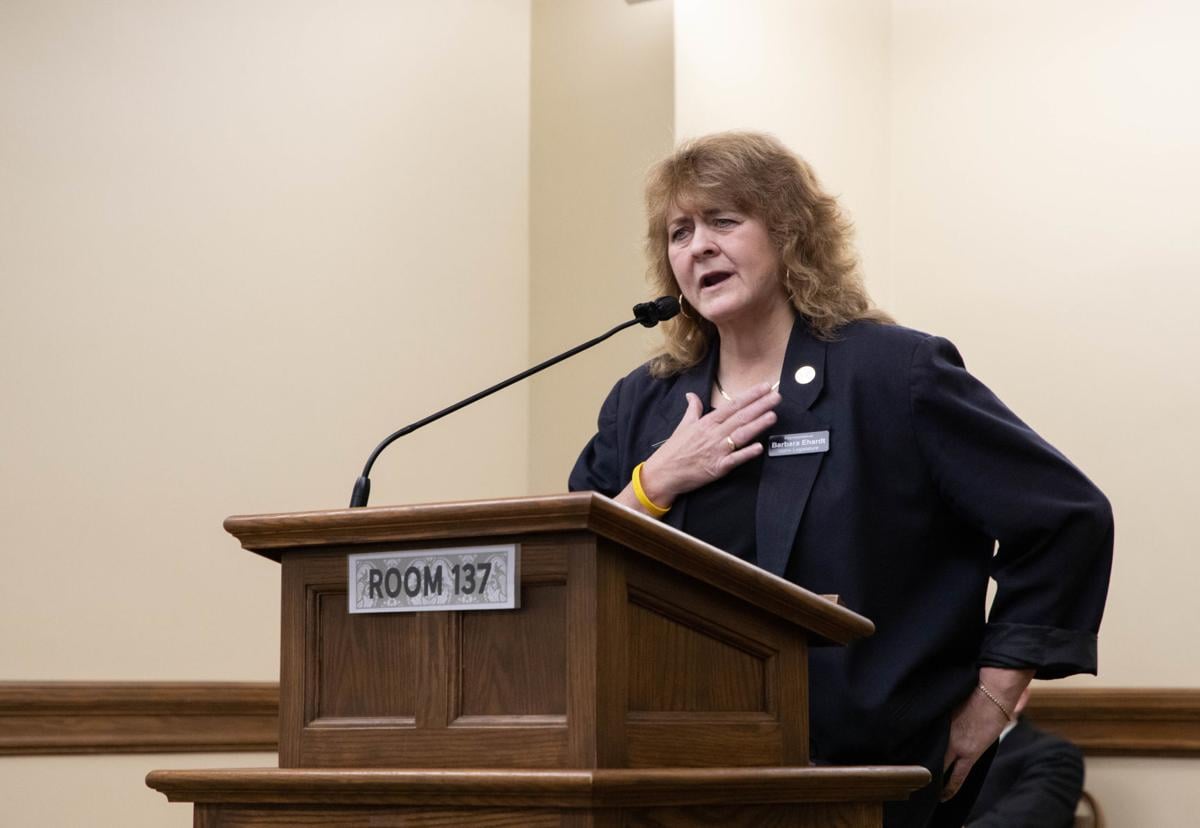 Idaho State Rep. Barbara Ehardt, R-Idaho Falls, testifies in support of Montana House Bill 112 during a hearing in the Montana House Judiciary Committee on Monday. The bill, which would ban transgender women and girls from competing in high school and college women’s sports in the state, is very similar to Ehardt’s bill, which was signed into law in Idaho last year and is currently embroiled in legal battles at the federal level. 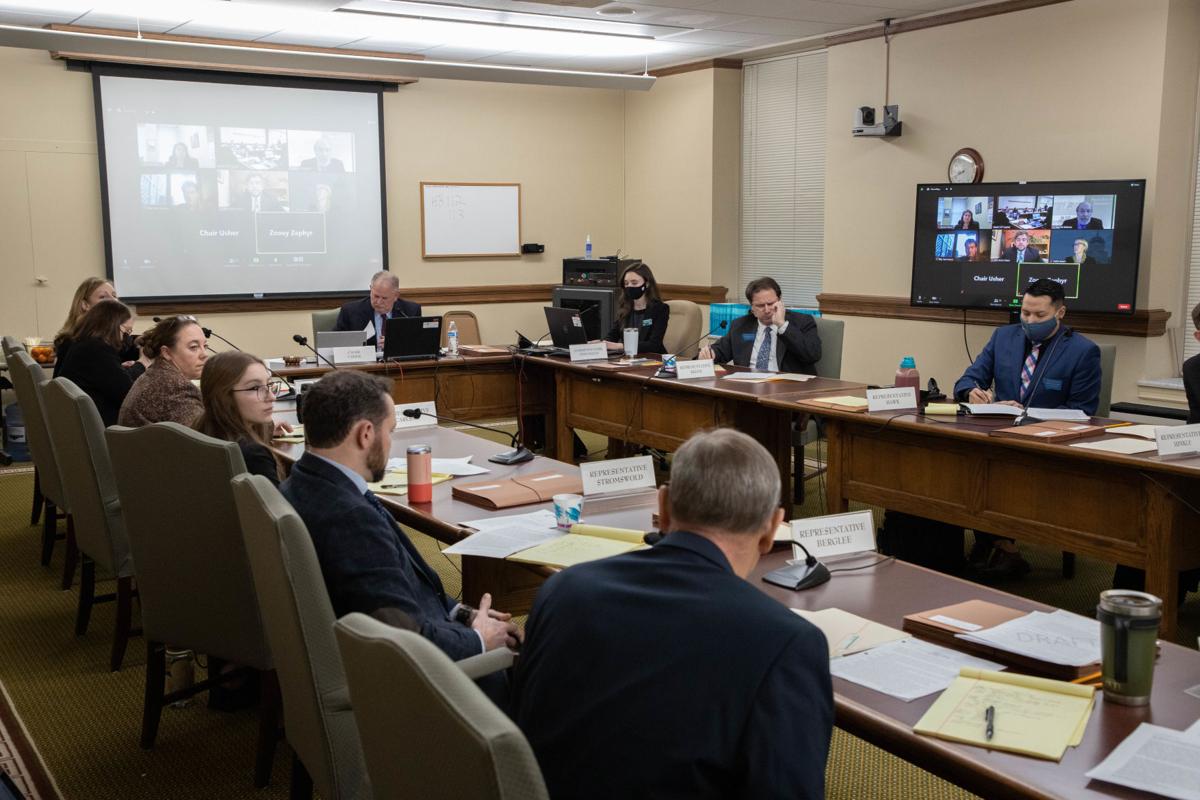 Members of the House Judiciary Committee hear testimony in mid-January. 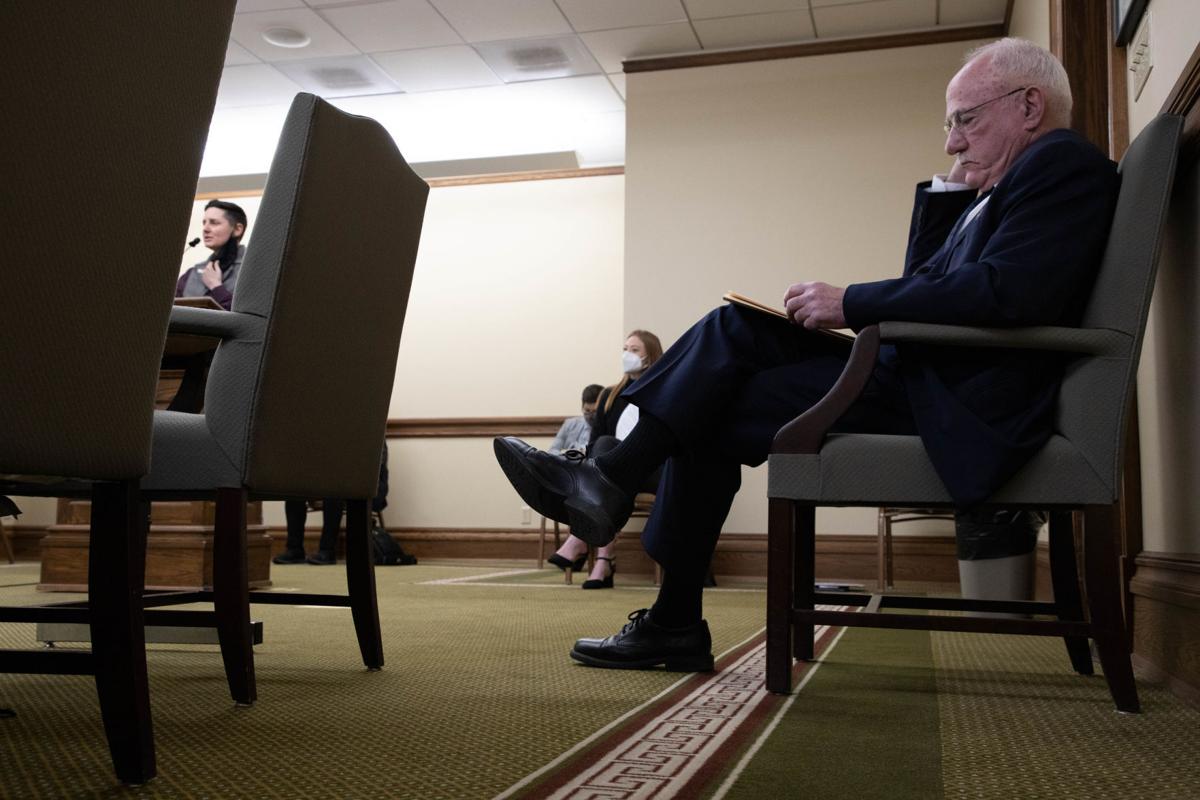 Montana Rep. John Fuller, R-Whitefish, listens as SK Rossi, representing the cities of Missoula and Bozeman, testifies against House Bill 112 and House Bill 113 in the House Judiciary Committee on Monday. 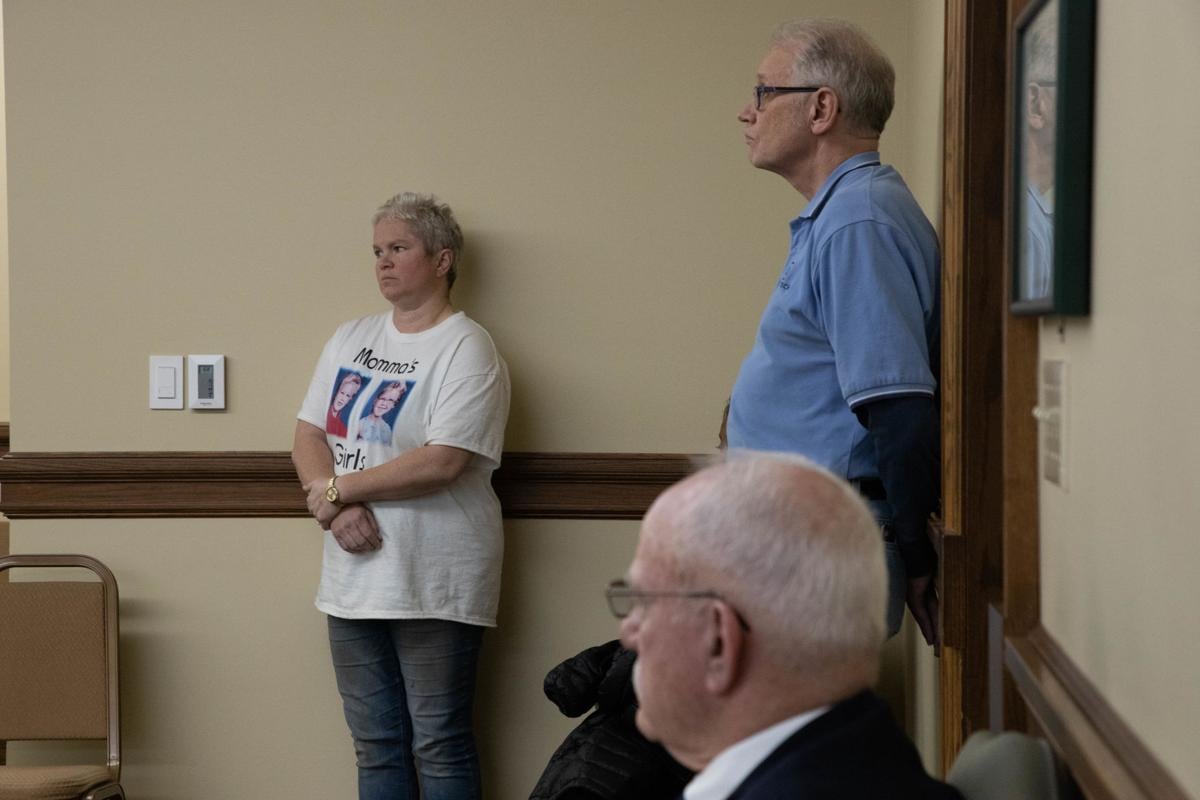 Two witnesses wait to testify as proponents of Montana House Bill 113 in the House Judiciary Committee on Monday.

Montana lawmakers held hearings Monday for a pair of bills that would require athletes at high schools, colleges and universities to participate in sports aligned with their birth gender and fine doctors for providing gender-affirming medications and surgeries to transgender minors.

Rep. John Fuller, R-Whitefish, introduced House Bill 112 and House Bill 113 to the House Judiciary Committee and received significant pushback. Nearly 150 public comments were heard between the two bills, with more than 100 of those in opposition. More testimony was submitted online, as the session is being held under a hybrid model that allows for remote participation because of the pandemic.

More than 400 medical professionals, 150 business leaders and 43 members of religious clergy in Montana have signed letters opposing both laws, as well as major hospital systems.

Fuller said Monday the bill is "designed to protect opportunities for women and girls in athletics by ensuring that women are not forced to compete against men playing on women's sports teams."

Much of the discussion by those in support of the bill expressed fear that cisgender women, meaning women whose gender identity corresponds to their sex at birth, would be at a disadvantage against transgender women.

Fuller's testimony, as with several others who testified in support of HB 112, said the bill is meant to support women's rights.

Transgender people face hurdles to be acknowledged as their gender, for example they are able to change the gender marker on their birth certificate after filing a "Correction Affidavit" as well as a "Gender Designation Form" and then filing a copy of a court order indicating gender has been changed.

The Montana High School Association does not have a transgender athletes policy. The NCAA, college sports' largest governing body, allows transgender men to compete on men's teams right away, while transgender women are required to have a calendar year on testosterone suppressing medication before being eligible to compete for a women's team. The NAIA, a small-college athletics union six schools in Montana belong to, has a similar policy to the NCAA.

A 2016 peer-reviewed study for the journal Sports Medicine did not find any specific advantages for transgender people in sports.

"Currently, there is no direct or consistent research suggesting transgender female individuals (or male individuals) have an athletic advantage at any stage of their transition," the study concluded.

In testimony Monday, Idaho Rep. Barbara Ehardt, who is carrying similar legislation in that state still under court review — repeatedly misgendered June Eastwood, a transgender woman who competed in the University of Montana's women's cross country and track and field programs after transitioning because she is a woman.

"You had a biological male compete for the University of Montana, on the women's team and that biological male only competed one year and incredibly well at the Big Sky Championships at Idaho State, my alma mater," Ehardt testified.

Opponents said HB 112 is discriminatory, unconstitutional, harmful to the mental health of transgender student athletes and wrought with privacy concerns. The first opposition to the bill was from Zooey Zephyr, a transgender woman from Billings who currently resides in Missoula.

Zephyr said she wrestled for 18 years, from age 4 until she was 22.

"I want to use my experience as a former high-level athlete to let the members of the committee know one simple fact: Trans people do not transition to gain an advantage in sports. We just don't," Zephyr testified. "Ultimately what I want to make clear is this: the image of 'trans women ruining the integrity of women's sports' paints a false picture of life as a trans woman.

"It incorrectly claims we have a competitive advantage and misses why trans people transition in the first place, which is to lead a happier life."

Research via the The Trevor Project shows 1 in 3 transgender youth have reported a suicide attempt and more than half reported a two-week period of depression.

Those rates are much higher than their cisgender peers and exclusion from sports, and the research found high levels of harassment in sports for transgender youth.

Athletics are often touted by coaches and parents, especially now during the pandemic, as critical to students' mental health.

Laurel Hesse, a legislative program manager with the ACLU of Montana, laid out several ways she said the bill would likely violate state and federal laws. Privacy concerns were also highlighted.

"It is unclear and almost unimaginable how this law would be enforced without enormous privacy violations," Hesse testified. "Are school nurses and coaches going to be responsible for asking students for their birth certificate, for a physical examination?"

The second piece of legislation discussed Monday morning, the "Youth Health Protection Act," would make it illegal for health care providers to prescribe hormone blockers, estrogen and testosterone to minors for the purpose of transitioning.

"(The bill) is designed to protect minors or children from the administration of drugs and chemicals and from the imposition of surgical procedures for the purpose of causing the child to physically appear more like a person of the opposite sex," Fuller said.

It would also make it illegal for doctors to provide gender-affirming surgeries to minors.

However, witnesses said transitioning does not always require surgery and gender-affirming surgeries for minors are not medically recommended, said Dr. Collen Wood, a pediatrician from the Billings Clinic during during questioning from the committee.

"So these procedures are not done in the state," Wood said.

Many of the proponents of the bill suggested hormone treatments are irreversible, which is not true as that is accomplished by no longer taking hormones.

"This bill would cause incredible harm to transgender youth in Montana and additionally would harm the large number of Montana pediatricians, family doctors, nurse practitioners and (physicians assistants), who collaborate with Montana endocrinologists and psychologists by comprehensive team-based care," testified Dr. Lauren Wilson, a pediatrician and vice president of the Montana Chapter of the American Academy of Pediatrics. "This bill would levy steep fines for simply following best practices to provide necessary care."

Matt Brower, the executive director of the Montana Catholic Conference, said he supported the bill and was representing the Roman Catholic Bishops of Montana.

"The first and most important thing is that our young people who struggle with issues of gender identity are all too often marginalized, rejected and vilified by others. As a society, we must agree this is entirely unacceptable," Brower said. "Understanding that, we may have different ideas about how we do that in a healthy and effective way."

Hesse said the bill discriminates against transgender people and is unconstitutional because it restricts their ability access to medical care.

Most gender transitions also increase the mental health and overall well-being of those who need them, according a review by Cornell University, which looked at 72 peer-reviewed studies on the topic.

Montana lawmakers will consider two anti-trans bills next week, one of which would fine healthcare providers for providing gender affirming treatment to transgender youth and the other seeking to force athletes to participate in sports aligned with gender assigned at birth

A bill to incentivize companies to build new broadband infrastructure was blocked by the governor's veto pen in the 2019 session, although Gov. Greg Gianforte's administration showed support for the proposal Tuesday.

As House Bill 112 moved through the Montana House Judiciary Committee on Thursday morning, the chorus of voices against the legislation grew louder.

Idaho State Rep. Barbara Ehardt, R-Idaho Falls, testifies in support of Montana House Bill 112 during a hearing in the Montana House Judiciary Committee on Monday. The bill, which would ban transgender women and girls from competing in high school and college women’s sports in the state, is very similar to Ehardt’s bill, which was signed into law in Idaho last year and is currently embroiled in legal battles at the federal level.

Members of the House Judiciary Committee hear testimony in mid-January.

Montana Rep. John Fuller, R-Whitefish, listens as SK Rossi, representing the cities of Missoula and Bozeman, testifies against House Bill 112 and House Bill 113 in the House Judiciary Committee on Monday.

Two witnesses wait to testify as proponents of Montana House Bill 113 in the House Judiciary Committee on Monday.