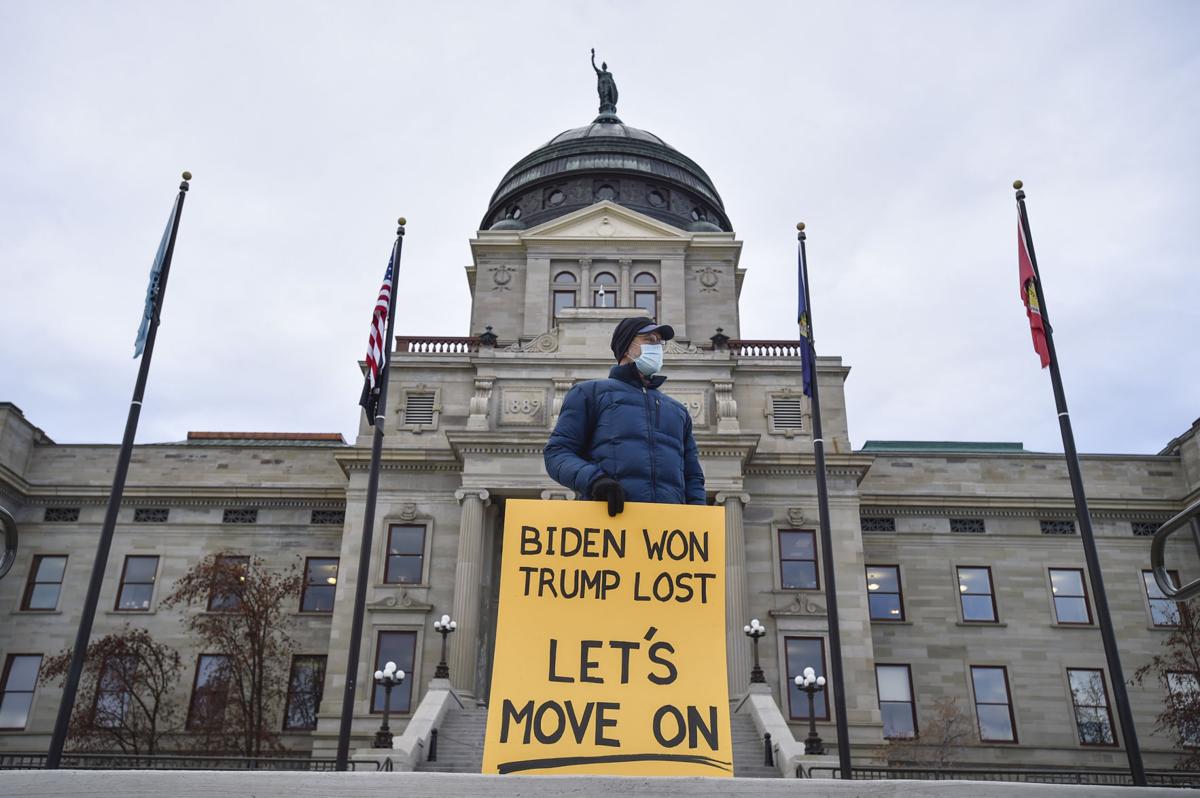 A lone demonstrator on the steps of the State Capitol, John Vore, shows his support for President Joe Biden on Wednesday. 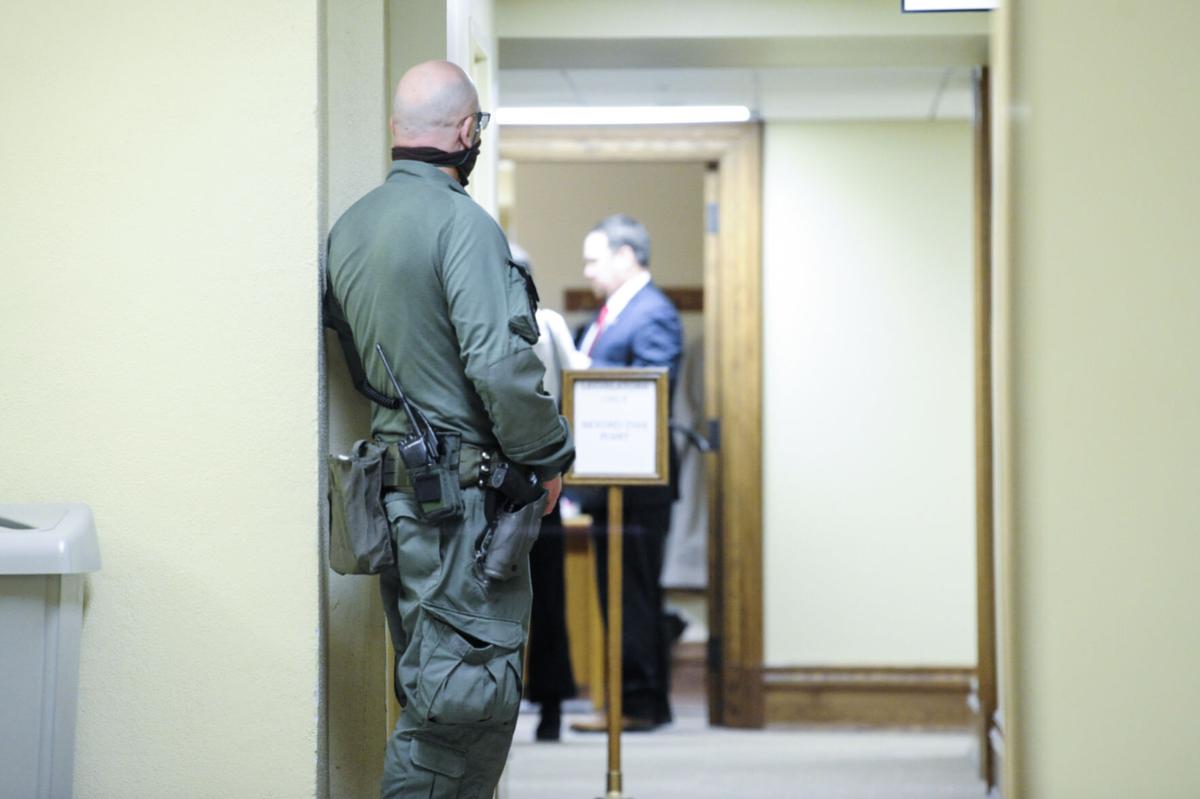 A law enforcement officer stands in the basement of the Montana State Capitol on Wednesday. 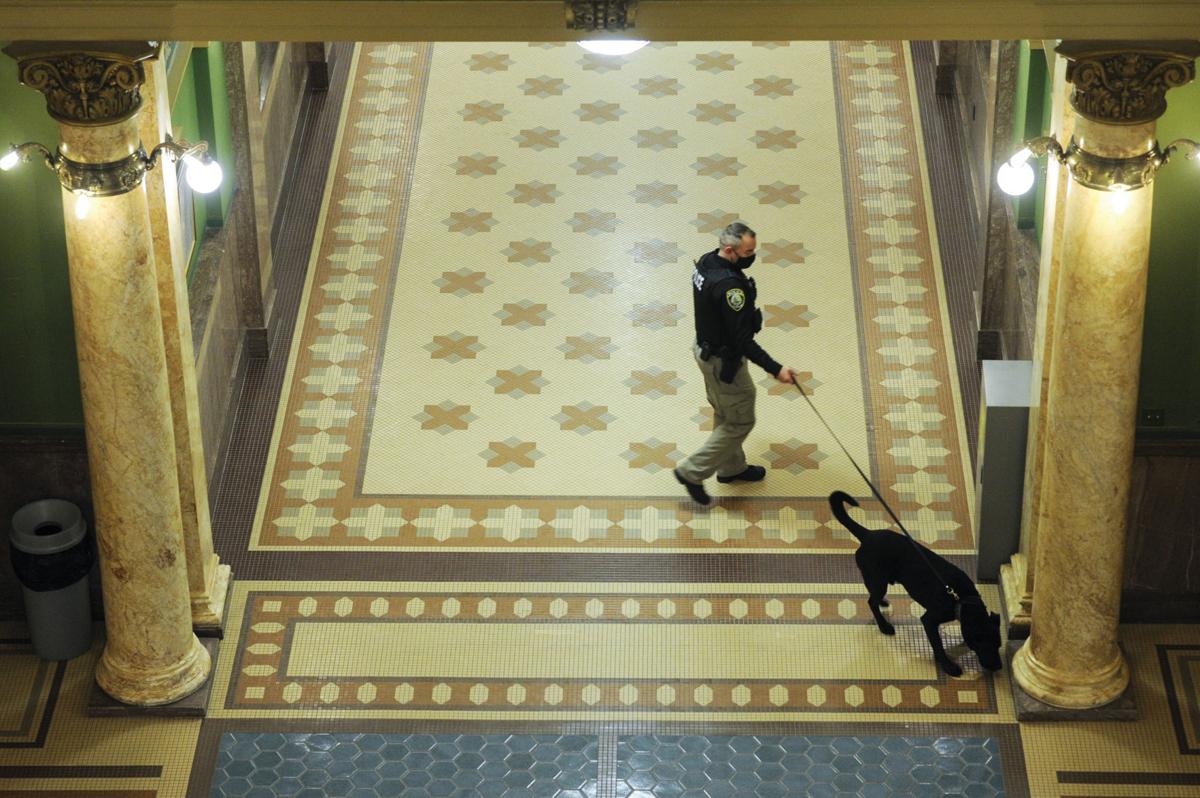 A law enforcement officer walks a bomb-sniffing dog through the rotunda of the Montana State Capitol on Wednesday.

On a day when officials braced for potential for violence at the Montana State Capitol from the supporters of outgoing Republican President Donald Trump, the first, last and only protestor to show up turned out to be a supporter of Democratic President Joe Biden.

John Vore, handling a large yellow poster board sign, seemed a little stunned Wednesday morning. Vore had planned to stand counter to the pro-Trump demonstration that was expected Wednesday at state Capitols around the U.S., but never appeared.

Since November, some of Trump's supporters have clung to the conspiracy pushed by Trump that the election was stolen from him. Vore, a 65-year-old retired Helena resident, stood alone on the Capitol steps holding a sign that read, "Biden won, Trump lost, Let's move on."

"I thought there would be some of the other folks, the insurrectionists, for lack of a better word," Vore said. "I'm glad it's peaceful."

The FBI had reported just days after the riot at the U.S. Capitol on Jan. 6 that it expected armed protests at all 50 state Capitols in the days surrounding Biden's inauguration. State officials said they would bulk up security at the Capitol complex in Helena in response to the FBI report.

Even before Vore took to the Capitol steps, city and state police trotted their K-9 dogs Kira and Ruger through the building as legislative hearings kicked into gear for the day.

The suspense was borne from the violence at the U.S. Capitol that left five dead, including a Capitol police officer. The lack of preparation by federal officials has since translated to resignations in D.C. and swift prosecutions for members of anti-government groups who stormed the Capitol to disrupt the certification of Biden's victory.

"This is worse than McCarthyism," Vore said. "I'm tired of the people who call themselves patriots but they’re actually insurrectionists. That's not the way we do things in the United States."

The lone man at what had been anticipated as a possibly violent Inauguration Day protest, Vore left after being encircled by reporters.

The Helena Police Department and state troopers maintained a presence around the Capitol grounds throughout the day.

Lewis and Clark County Sheriff Leo Dutton told the Montana State News Bureau his office had been in direct contact with five groups who had reportedly planned on protesting at the state Capitol, and reached an agreement that they would not make an appearance.

"It wasn't in their best interest to be rioting or disrupting the Legislature," Dutton said. "They were not happy with the outcome of the election but did not feel it was appropriate to do any malicious activity."

Dutton declined to name the groups his office spoke with, as well as specifics on the resources the sheriff's office deployed Wednesday to the state Capitol, but he said the measured police presence was the product of solid communication from each agency involved.

"From the governor on down, all the conversations we had, it was a good exercise in working together, having multi-level jurisdictions work together cooperatively and understanding we were there to keep the peace should something arise," Dutton said.

A spokesperson for the Montana Department of Justice declined to share the number of state police dispatched to the Capitol on Wednesday, saying it was against policy to share details of security plans or operations.

State capitols around the country had set up fencing, barriers and legions of guards via police or the National Guard in preparation of Wednesday's expected unrest, only to see a handful of protesters, if any, at each site.

Travis McAdam, a program director with the Montana Human Rights Network, said Wednesday such protest events have historically seen less turnout after law enforcement turns its eye toward anti-government groups. The FBI's arrests following the insurrection in D.C. and a fear they may be arrested for showing up at an associated event likely cooled the urgency to protest, McAdam said.

"I think that law enforcement focus helped tamp down the enthusiasm after the attack on the Capitol," McAdam said.

One Trump supporter, Rep. Braxton Mitchell, a Republican from Columbia Falls, stepped out onto the Capitol steps around 10 a.m., around the time Biden's presidency became official, and took a picture with a Trump 2020 flag. Mitchell, 20 years old and on the younger end of the state legislative roster, said the photo was for his social media accounts.

"Just gonna put a post out, 'Thank you President Trump for the last four years,'" Mitchell said. "As a Republican, you know, I feel like dark days are ahead and I wanted to post on social media. … Some of the policies that the Democratic Party intends to bring, the Green New Deal, things like that. It’s not gonna work."

Sheriff: No evidence of impairment in Woods crash

Sheriff: No evidence of impairment in Woods crash

A Montana appliance store owner has been arrested and faces federal felony charges for his alleged participation in the breach of the U.S. Capitol while Congress was certifying the Electoral College vote.

"We have our foot in the door, but we need to get into the room," Rep. Sharon Stewart-Peregoy, D-Crow Agency, said before the House Judiciary Committee on Thursday.

Montana National Guard back home after duty in Washington, D.C.

A lone demonstrator on the steps of the State Capitol, John Vore, shows his support for President Joe Biden on Wednesday.

A law enforcement officer stands in the basement of the Montana State Capitol on Wednesday. 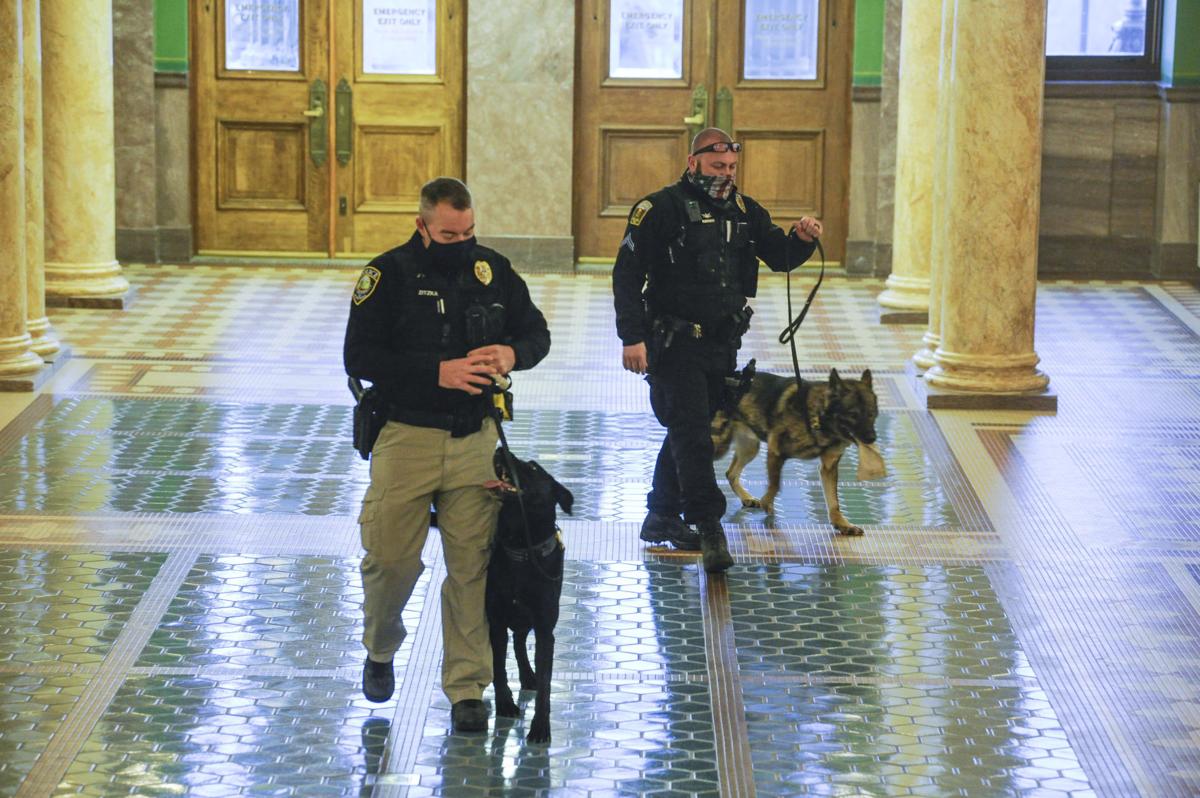 Law enforcement officers with bomb-sniffing dogs Kira and Ruger patrol the Rotunda of the Montana State Capitol on Wednesday.

A law enforcement officer walks a bomb-sniffing dog through the rotunda of the Montana State Capitol on Wednesday. 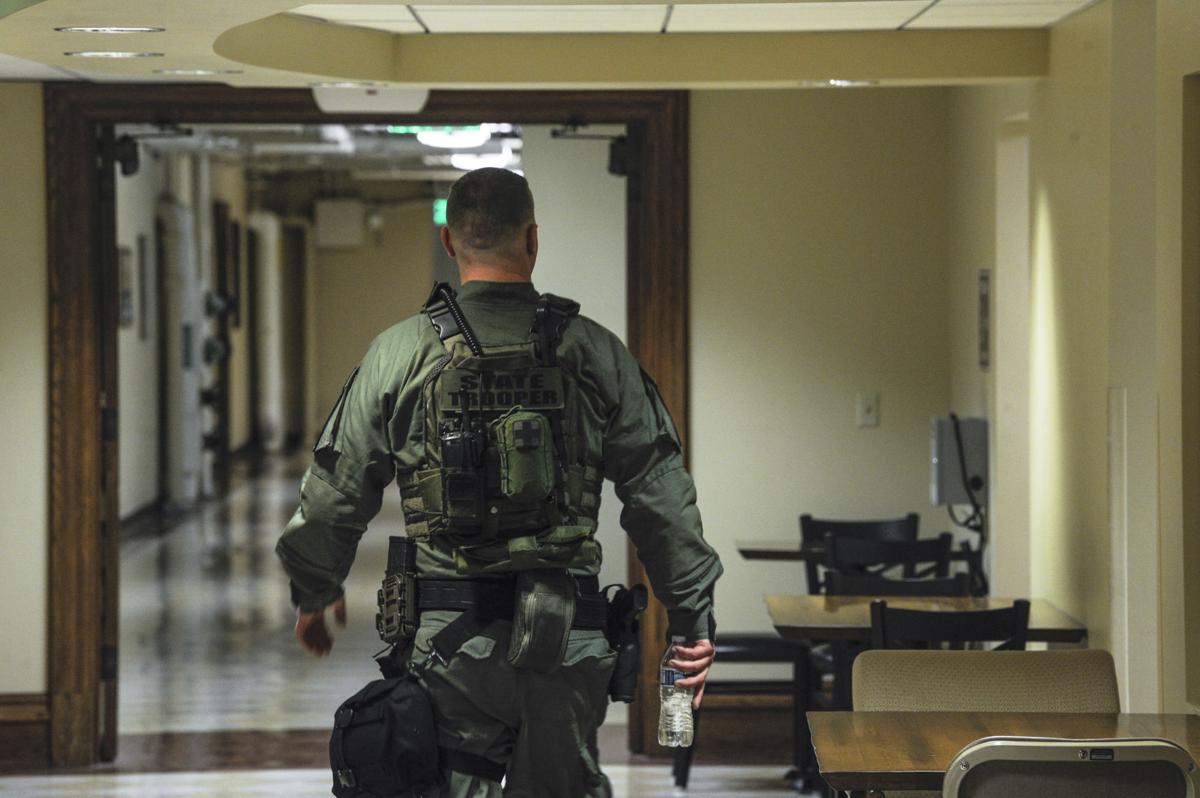 A law enforcement officer walks through the basement of the Montana State Capitol on Wednesday. 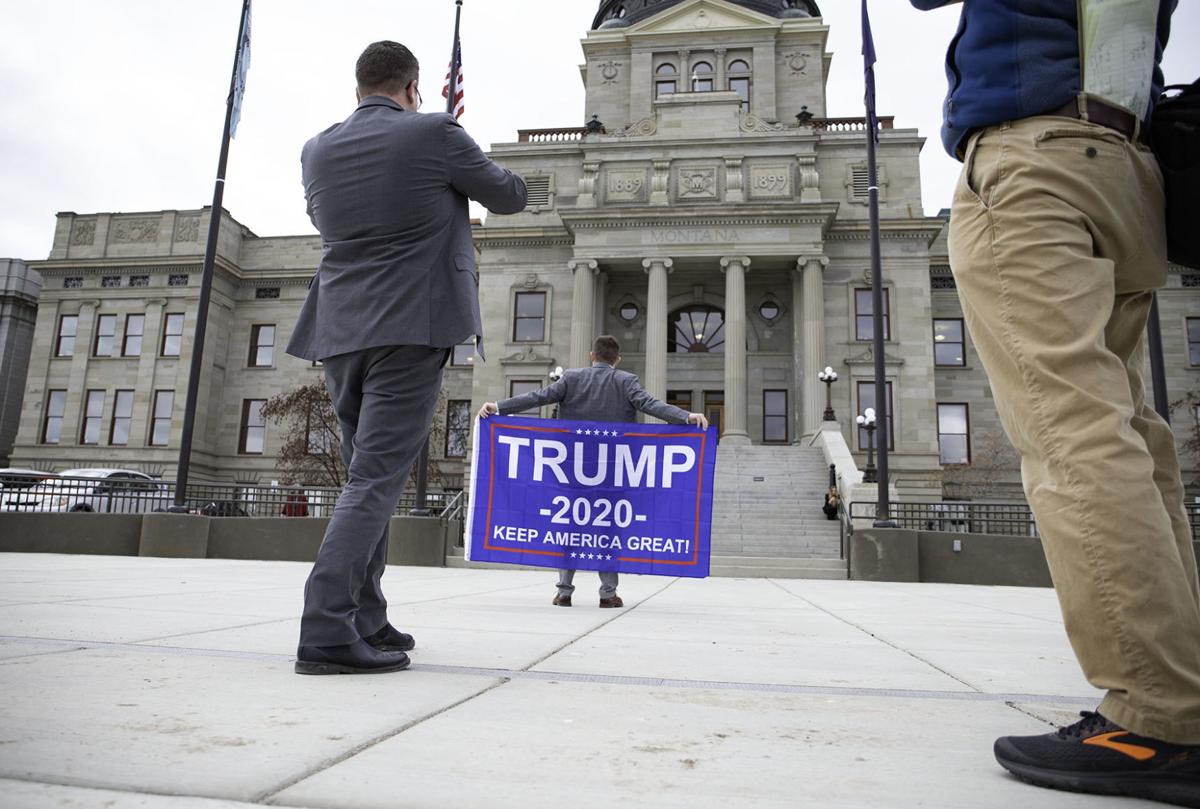 Rep. Braxton Mitchell, R-Columbia Falls, poses with a Trump 2020 flag in front of the Montana State Capitol on Wednesday morning as Democrat Joe Biden was sworn in as the 46th president of the United States. Mitchell had the photo taken to post to his social media accounts, he said, so he could thank Trump for his work over the past four years.