The Montana Nurses Association issued a statement Wednesday blasting the governor's recent emergency rule regarding masks in school as a violation of state law and promotion of "junk science."

The association, which represents nurses in collective bargaining agreements and advocates for them at the state Legislature, posted the statement to its website on Wednesday.

The Governor's Office did not respond to an email on Wednesday seeking comment on the nursing association's characterization of the emergency rule as a violation of state law.

The statement condemns an emergency rule issued by Gov. Greg Gianforte and the Montana Department of Public Health and Human Services last week. The rule sought to "promote parental rights regarding masks in schools," but stopped short of ordering schools to heed parents when determining their local mask policies and instead stating school districts "should" consider parent concerns about mask requirements. The rule was quickly denounced by the medical community and school districts reported they were already providing opportunities for public input before implementing their mask mandates.

Billings and Missoula are among the schools that have implemented mask mandates for students. The mandates have prompted protests by parent groups, while three Missoula County Public School districts have been sued by parents claiming the required use of masks violates their children's right to private, dignity and free expression "without the necessary showing of a compelling government interest in doing so."

The nurses association on Wednesday said, after its own legal review, the emergency rule did not meet the requirements in state law that allow the governor to to exercise the authority to override the regular rulemaking process and public participation needs. Because the rule did not contain a mandated requirement, it did not solve a problem that "cannot be averted or remedied by any other administrative act," the association writes.

"DPHHS could just as easily have issued a press release stating the same suggestions, without abusing the rulemaking process," the statement reads.

The statement also blasted the body of examples cited by the Governor's Office to back Gianforte's claim that mandating masks for students was based on "inconclusive research." Adam Meier, director of the Montana Department of Public Health and Human Services, said in the same press release that "a number of" studies indicate that universal mask use among children can adversely affect health and development, particularly among children with learning or developmental disabilities.

One study provided by the Governor's Office was not peer reviewed, the association pointed out, while the second study clearly supported masking, which the association said added to the confusion. Another provided example was not a scientific journal but an article in New York Magazine by an author of several articles contradicting "scientific consensus," and a fourth was about the spread of influenza, not COVID-19, the association's statement read.

Montana's Republican governor has threaded the political needle in recent weeks as COVID-19 festers across the state once again. Gianforte said in a press conference last month he would not issue a mask mandate or vaccine mandate while still urging Montanans to get vaccinated, a recommendation that some commenters on social media said would cost their political support. He said during the press conference it was "unfortunate" the conversation about whether to get vaccinated has been politicized.

The daily number of new COVID-19 cases reported by the state has maintained its upswing since late July, driven by the highly contagious delta variant. The state COVID-19 tracker tallied 6,680 active cases on Wednesday and 1,828 deaths since the pandemic began. The state's vaccination rate is 51%.

Gov. Greg Gianforte announced Tuesday that his budget director will leave the administration and will be succeeded by a GOP legislator.

The judge found the issues raised by former Democratic Reps. Tom Winter and Barbara Bessette were "without merit."

The sale of big game licenses to outfitted nonresident under House Bill 637 equates to $1.6 million. 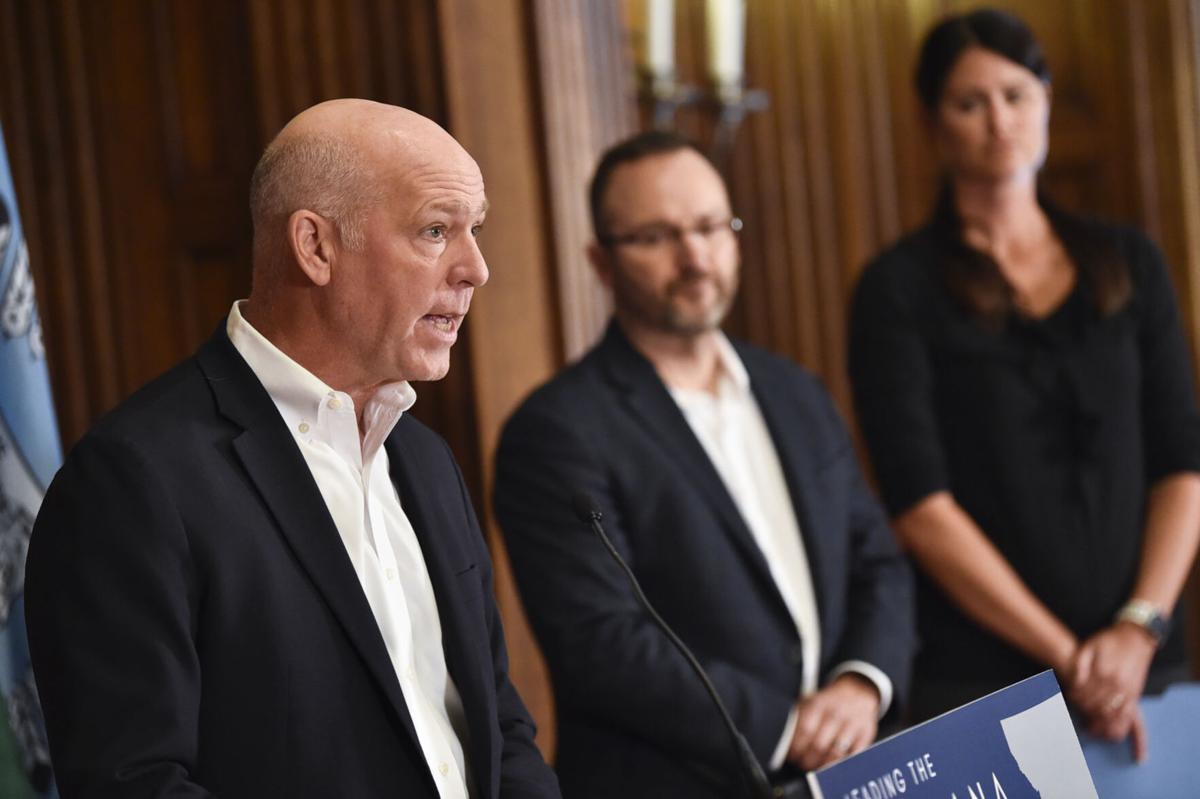 Gov. Greg Gianforte speaks at a press conference on Tuesday in the Montana State Capitol.