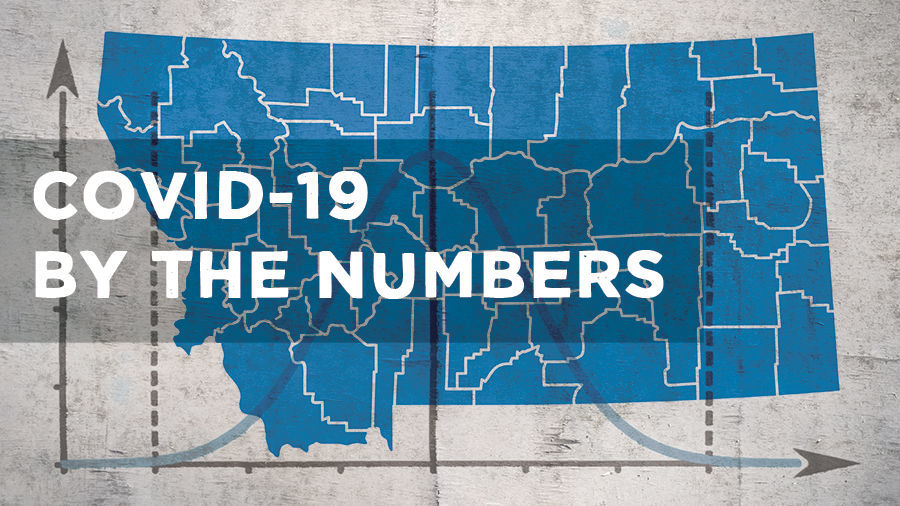 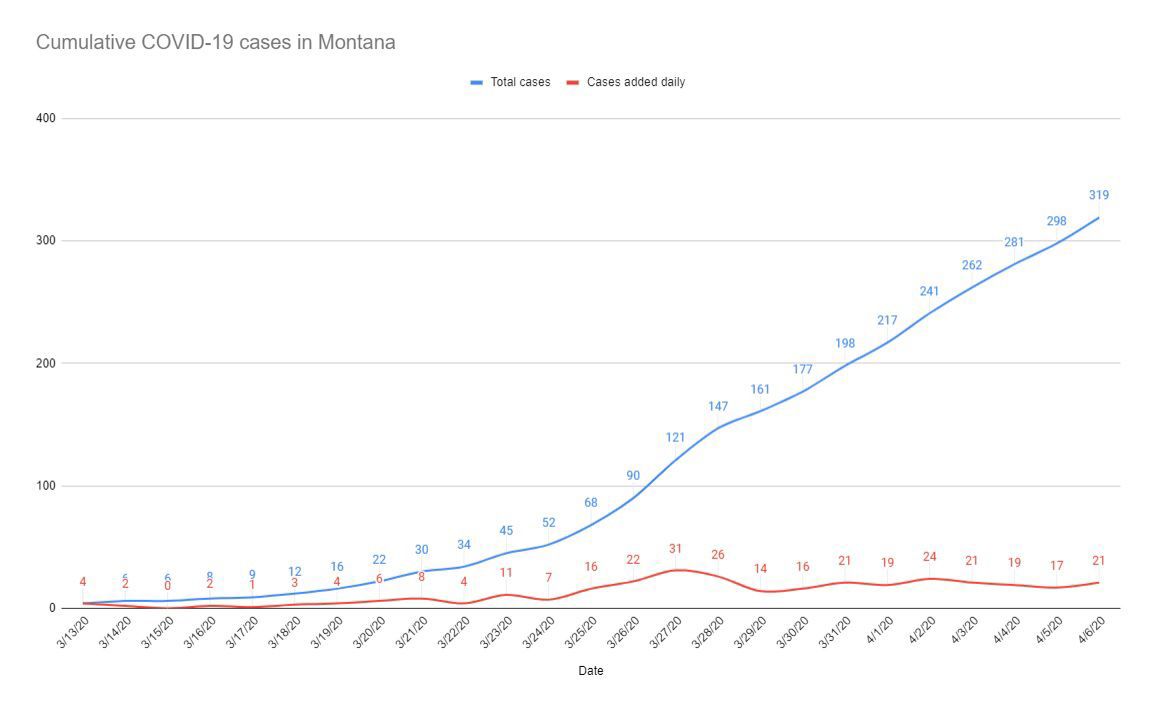 As Montana is expected to extend its stay-at-home order for another two weeks, the state hit 319 known COVID-19 cases Monday, with six deaths reported statewide and 27 hospitalizations.

The state public health laboratory in Helena has processed 6,985 tests for Montanans, though that figure does not capture tests health care providers send to private labs. Positive results from private labs are included in the state totals.

The state also announced Monday it will change how it updates COVID-19 testing results online, moving from twice-daily updates to a mid-morning report. In an email, the state Joint Information Center said the change will "allow the staff of the Montana Public Health Lab to prioritize processing an increasing number of tests while still providing timely updates to the public."

Gov. Steve Bullock said early last week 32 people had recovered from the illness, caused by the coronavirus, though there's not been an update since. The state and local public health officers had previously said that number is difficult to provide as they are spending resources tracking contacts of known cases and rely on doctors to provide that information.

Yellowstone County has 47; Flathead has 31; Missoula has 24; Lewis and Clark and Toole each have 15; Butte-Silver Bow and Cascade each have 11; Madison has nine; Lincoln has seven; Park has six; Lake has five; Broadwater has four; Anaconda-Deer Lodge has three; Carbon, Jefferson and Ravalli each have two; and Beaverhead, Musselshell, Meagher, Roosevelt, Hill, Liberty and Glacier all have one.

Toole County, with a population of about 4,800, has been hit especially hard by the virus at least in part because of an outbreak in an assisted living facility there. Three of the state's six deaths have been there, and there were 15 cases by Monday.

The number of cases reported Monday represents an increase of 21 over Sunday. During the past week, the number of cases each day added has ranged from a low of 17 to a high of 24. The most cases Montana has added in a single day so far is 31, on March 27.

The number of tests run daily at the state lab, while generally up over testing in the first week or so of the outbreak, was lower the last two days. On Sunday the lab reported running 270 tests, while on Monday it processed 196. The state said Monday evening that tests submitted to the laboratory tend to be lower over the weekend and it has not heard from health care providers about about a shortage in testing supplies that would limit their ability to follow federal Centers for Disease Control and Prevention recommendations for who should be tested.

The number of tests run has reached as high as 631 in a day during the past week, and has been roughly in the range of 340-500 recently.

Also on Monday, a model from the Institute for Health Metrics and Evaluation at the University of Washington issued a projection that decreased the number of deaths in Montana and needed hospital beds due to COVID-19, following an order from Bullock more than a week ago for people to stay at home except for essential travel and work.

Bullock said Friday he expects to extend a stay-at-home order, as well as the closure of K-12 public schools, beyond their April 10 expiration date, likely by two weeks, until April 24.

Photos of the coronavirus response in Montana

"I Love You" Butte students and teachers share a moment

Tech lends hospital beds and equipment to St. James for use during the pandemic

Montanans ordered to shelter in place

Filling time while furloughed during the coronavirus pandemic

A healthcare worker tests a patient for Covid-19

Kindness during a pandemic

Bullock said he is doubling the supply of food commodities from the federal government that are provided at no cost to Montanans through food banks, by tribal governments, senior centers and other places.

While acknowledging that testing capacity for COVID-19 in Montana is not unlimited, Gov. Steve Bullock said Friday there’s been sufficient inv…

Montana hit 262 known COVID-19 cases Friday, according to numbers from the state, with five deaths reported statewide and 24 hospitalizations.

Nearly 40% of the known COVID-19 cases in Montana are in Gallatin County, a scenario shaped first by the area’s allure for those inclined to travel and then by the virus’ spread within the community.

Gov. Steve Bullock said Tuesday about 32 people had recovered from the illness, caused by the coronavirus.

Helena man charged with trying to kill ex-girlfriend at party

The state also reported 51 recoveries, a number recently added to a website with COVID-19 information.

The extension also applies to orders such as a post-travel quarantine for most people and pauses on evictions.

The day after state medical director Greg Holzman told reporters on a press call that there were no known cases of COVID-19 on Montana's seven tribal reservations, the Fort Peck Assiniboine and Sioux tribes said in a Facebook post their reservation in northeastern Montana has two cases. 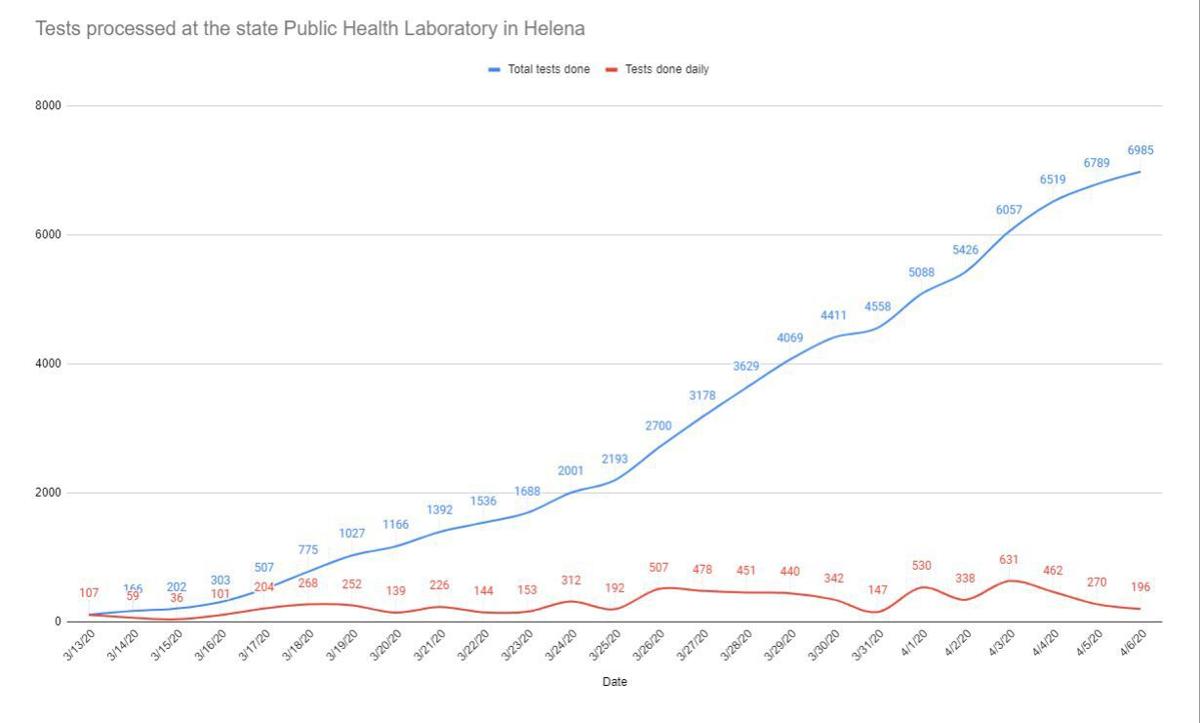