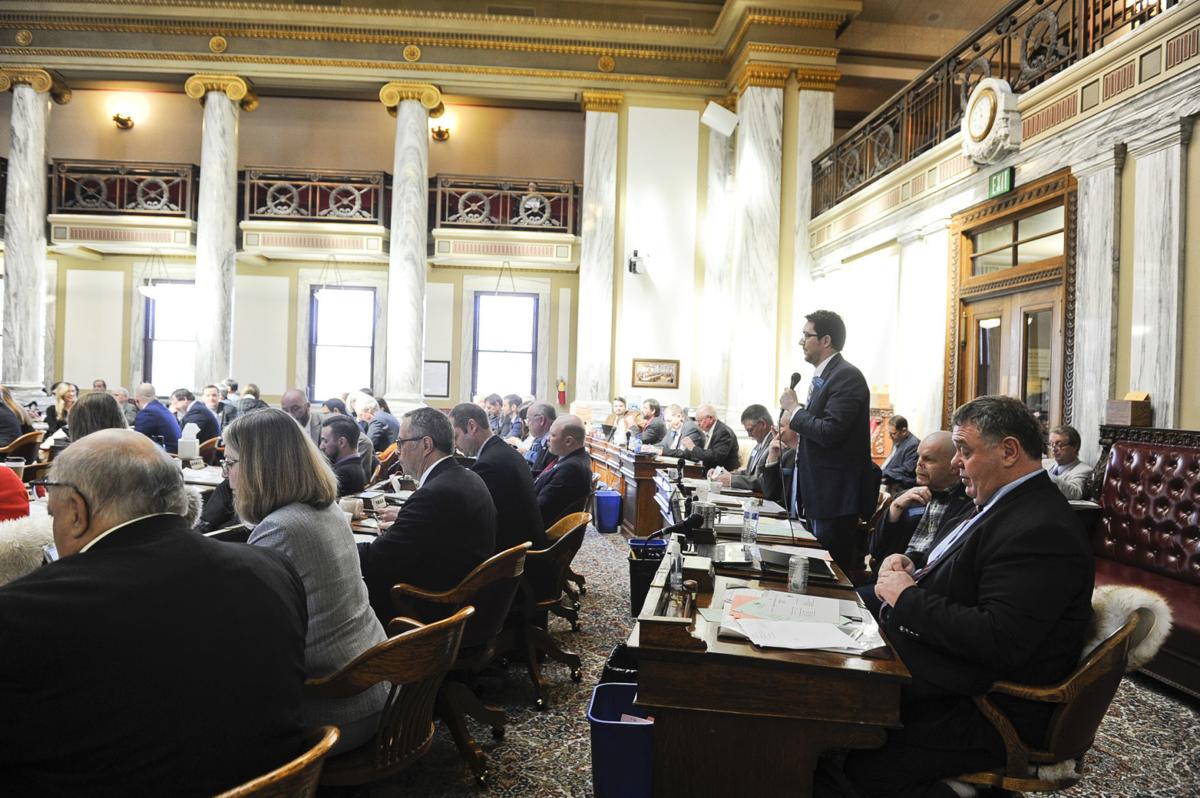 Rep. Daniel Zolnikov, R-Billings, speaks on the House floor Thursday at the state Capitol before the Legislature adjourned for the session. 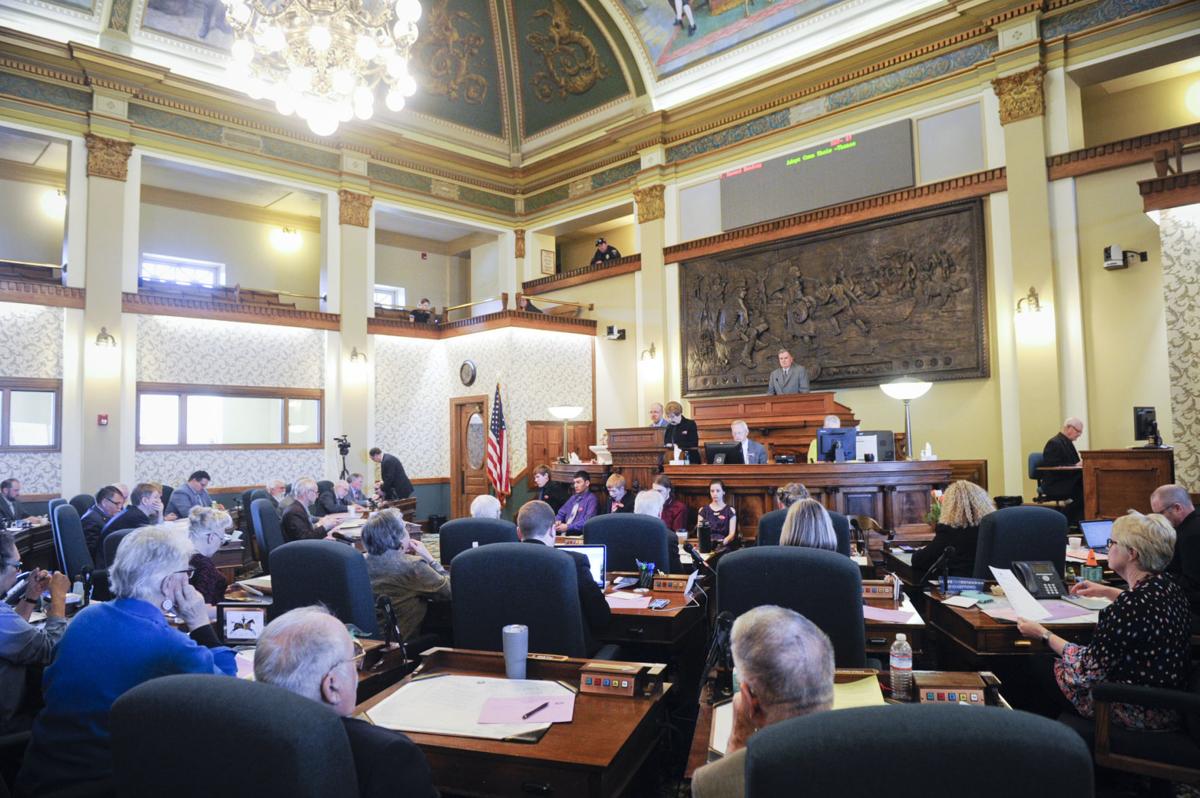 The Montana Senate votes on a bill Thursday at the state Capitol. 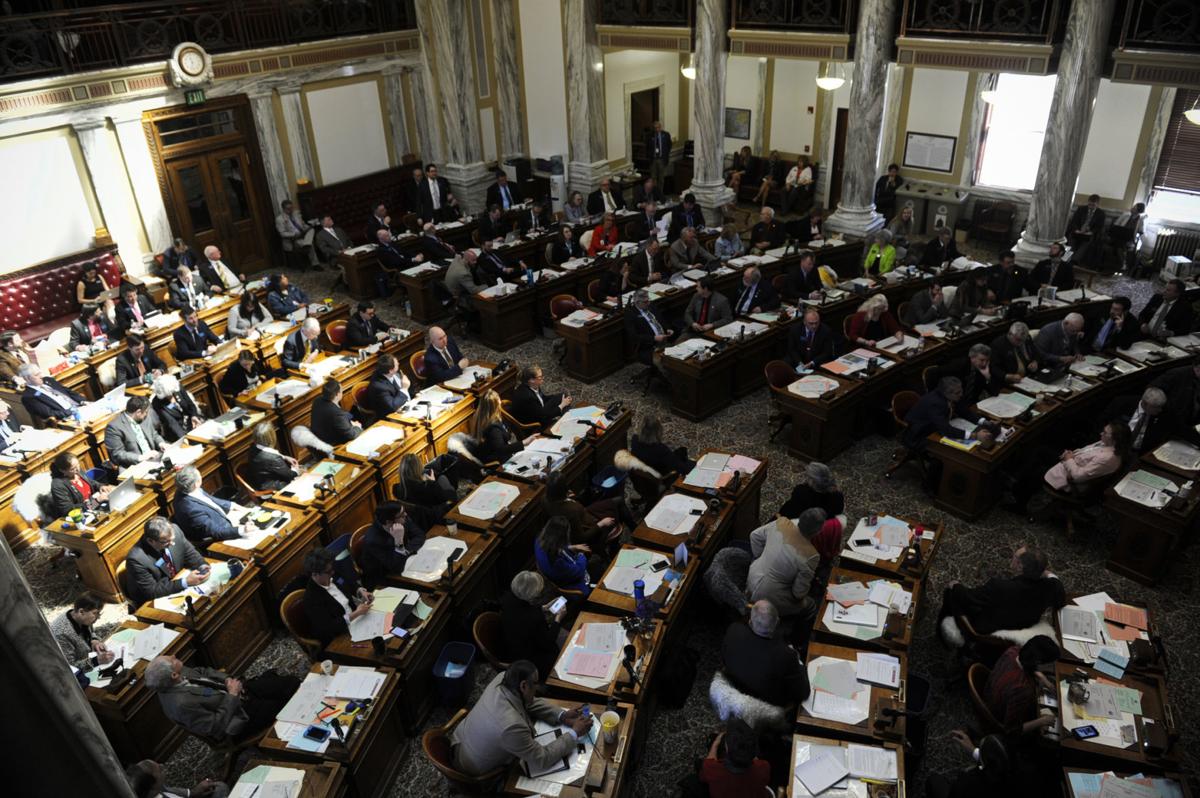 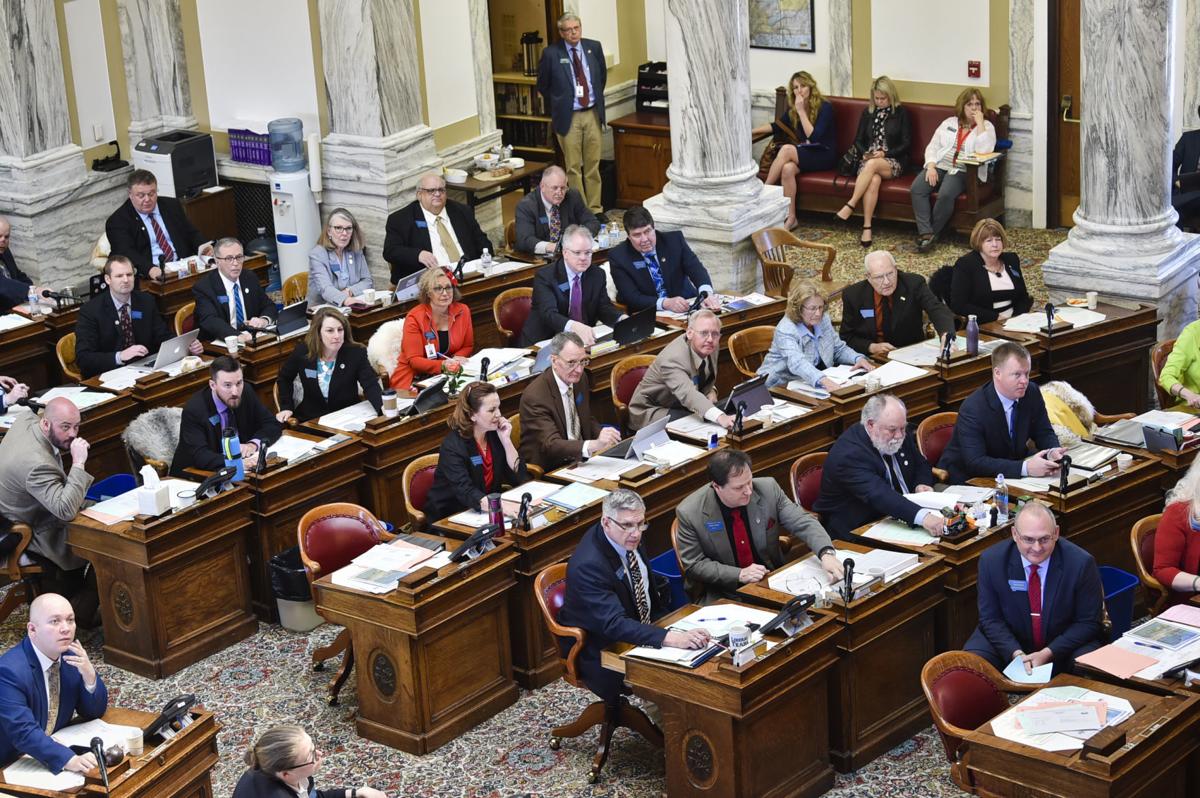 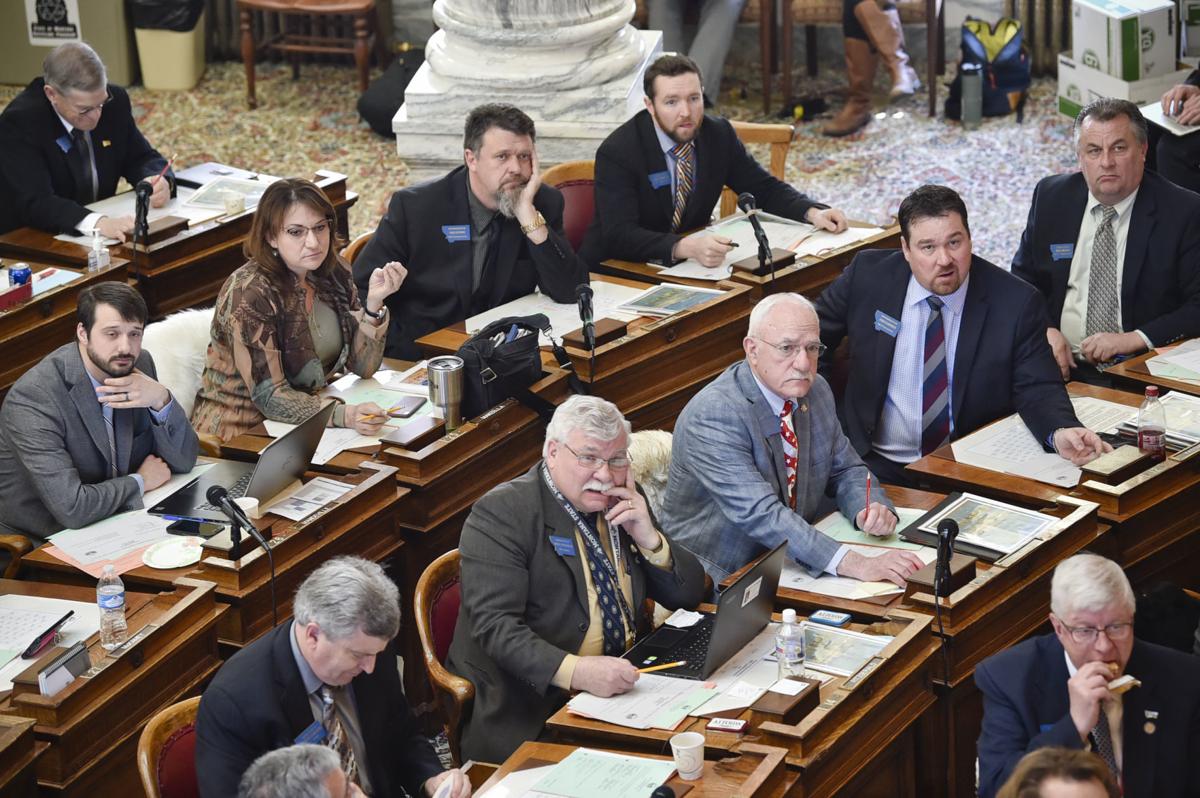 The Montana Legislature adjourned Thursday afternoon, marking the end of an 87-day session that saw the continuation of Medicaid expansion and the passage of the first infrastructure bonding bill in four sessions.

Lawmakers Thursday also passed a $10.3 billion budget that is estimated to leave about $210 million for the state to deal with emergencies or if revenues come in lower than expected.

The Legislature also approved a bill to build a new Montana Heritage Center in Helena, a project that had been voted down for the last several sessions, and create grants for museums across the state, as well as historical mansions in Billings and Hamilton.

Included in the $80 million bonding bill is the renovation of Romney Hall on the Montana State University campus in Bozeman, another long-asked-for project that finally crossed the finish line. Many attribute breaking the logjam on a comprehensive infrastructure bill — the likes of which has not happened since 2011 — to related legislation to set up a framework for how the state takes on bonding. That bill establishes limits on debt the state can take on.

Sen. Jon Sesso, a Democrat from Butte and minority leader in the Senate, praised the passage of the infrastructure bill.

Left unaccomplished were efforts to pass a bill its sponsors said would “save” the coal-fired power plant in the town of Colstrip, and an attempt to create a statewide preschool program.

"It's a huge issue and I don't think it's going away," Senate President Sen. Scott Sales, a Republican from Bozeman, said of the Colstrip legislation after the Senate adjourned Thursday.

Sales, who is termed out and has announced a bid for Secretary of State, said he wants the next Legislature to take up the issue in 2021. The original bill proposed, which underwent several amendments before being voted down, would have eased the way for NorthWestern Energy, the state's monopoly utility, to increase its ownership share in Colstrip and pass $75 million of the cost onto ratepayers.

Expanding a pilot preschool program first approved in 2017 was a major priority for Gov. Steve Bullock, a Democrat who said he was disappointed to see a last-ditch effort to preserve Montana's existing program fail hours before the session ended. Bullock is termed out and expected to announce a bid for president.

"That's nearly 1,400 children across the state that won't be able to enter into a preschool classroom next year, who won't have the opportunity to build on the foundational skills needed to succeed in school and life," Bullock said.

The session was also characterized by a group of Republicans in the so-called “Solutions Caucus,” a group of about 20 in the House and roughly 10 in the Senate who joined with Democrats to pass legislation like Medicaid expansion.

Both Republicans and Democrats claimed victory on issues they wanted to see achieved — Medicaid expansion for Democrats and holding strong against tax increases for Republicans.

"We delivered," said House Minority Leader Rep. Casey Schreiner, a Democrat from Great Falls. "We sat down at the table, we worked hard and we delivered the solutions that we put out as priorities for the people of Montana." Schreiner cited Medicaid expansion as one of the top items Democrats were able to get passed this session.

Sales said his caucus knew from the start of the session Medicaid expansion would pass, and while it wasn't popular with many in the GOP, the party was successful in getting changes to the bill that was originally proposed. That includes a sunset of 2025 and increasing checks on residency to qualify for coverage. Expansion extends Medicaid coverage to those earning up to 138 percent of the federal poverty level, which is $17,236 for an individual and $29,435 for a family of three.

"We tried to make it as cost-effective and put as much accountability in the bill that we possibly could get through," Sales said. "In my opinion we took a sow's ear and turned it into a silk purse the best we could."

Speaker of the House Rep. Greg Hertz, a Republican from Polson, said he felt his caucus was successful in voting down proposals to increase taxes. Many Republicans ran on and signed no-new-taxes pledges.

"There were a few taxes that got out of the House and crossed the Legislature that I was disappointed in, but for the most part we kept taxes to a minimum on the citizens of Montana," Hertz said. The bill to build the Heritage Center increases the state lodging tax 1 percent.

Sen. Fred Thomas, a Republican from Stevensville who is majority leader in the Senate, cited several bills related to education, including workforce training in a student’s senior year of high school, as successes for Republicans.

Thomas also pointed to bills to exempt taxes on new broadband fiber installation to encourage development, and tax credits for employers who create jobs, as key Republican bills that have passed. Those bills have not yet been signed by Bullock, who said Thursday he expected to have to veto legislation to keep the state’s ending fund balance at a level he finds acceptable.

"There's millions of dollars in spending bills heading to my desk, spending with no revenue tied to it, or way to pay for it, that will require me to veto," Bullock said. About 300 bills that have passed have not yet been sent to Bullock.

Overall the governor praised the tone of the session, saying "In Montana we continue to be a shining example of how our political system is supposed to work."

The session also saw the passage of bills meant to address the epidemic of missing and murdered Native women, as well as legislation meant to fix problems at residential treatment programs for teenagers.

Lawmakers also approved of a slimmed-down proposal to change the statute of limitations for sex crimes against children. The bill that emerged eliminates the timelines to bring a criminal charge but preserves them, with some extensions, on the the civil side.

The change was brought in response to the case of James Jensen, a former Miles City athletic trainer who is accused of abusing dozens of boys, and who started to contact his victims last year — in some cases admitting to the abuse — after the statute of limitations expired.

Another bill this session ensures that firefighters will be covered for workers compensation claims for illnesses that are presumed to come from their work fighting fire.

What's still in play in the final days of the Montana Legislature?

'A bill of life and death': Legislature passes Hanna's Act

As the Montana Legislature nears its final days, some lawmakers are objecting to policies being added into so-called budget companion bills in…

The public outcome from days of behind-the-scenes horse-trading played out Tuesday in the state Capitol, where the Senate passed a Medicaid ex…

The Senate on Tuesday punted on debate over $80 million in infrastructure projects, saying it would take up the legislation later.

As a gallery packed full of onlookers watched, the Montana Senate by a 1-vote margin endorsed a bill to continue Medicaid expansion in the sta…

It's now illegal for staff and therapists at private residential treatment programs for troubled teens to have sexual relationships with the teens they treat — even if those clients are 16, the age of consent in Montana.

The last of many nails was driven into the coffin of public preschool funding at the Montana legislature Thursday, as two last-ditch proposals were rejected.

On its final day, the Montana Legislature passed a resolution to study and make recommendations to Congress on the management of wilderness st…

The communications director for Gov. Steve Bullock is departing at the start of next month, and the position will be filled by the governor's …

Romano to take another run at top education job in 2020

Melissa Romano, a Helena Democrat who ran unsuccessfully for the superintendent of public instruction position in 2016, is seeking the job aga…

As the bill to increase the tax on aviation fuel moved through the Montana Legislature, it did so accompanied by a barrage of online efforts o…

The morning after a contentious vote on one of the most controversial bills of the 2019 legislative session last March, jars of Vaseline showe…

BROWNING — At a tribunal here to record testimony from the families of Indigenous people who have gone missing or been murdered, organizer Bel…

Rep. Daniel Zolnikov, R-Billings, speaks on the House floor Thursday at the state Capitol before the Legislature adjourned for the session.

The Montana Senate votes on a bill Thursday at the state Capitol.