The 80-day term was defined, even before it started, by the coronavirus pandemic. Since last summer, Democrats had raised concerns over gathering 150 lawmakers and the potential for hundreds of staff, lobbyists, the public and news media into the Capitol in close quarters.

"We were bold to have this session. There were numerous people that told us we shouldn't," said Senate President Mark Blasdel, a Kalispell Republican, in a press conference after sine die Thursday.

Republicans defended their hybrid plan, which for the first time allowed remote participation. By the end of the session, six legislators and the governor tested positive for COVID-19. Cases among lobbyists, the press and others were harder to track, but a lobbyist's case shut down two days of floor sessions in mid-April.

On the final day, lawmakers also nearly passed changes to a recreational marijuana implementation plan brokered over the last month. Implementing a program for the taxation and sale of recreational marijuana, which was approved by voters in November, proved one of the heavier lifts of the session.

House lawmakers passed along party lines the state's $12.6 billion budget, the only thing law requires them to accomplish during the session. Republican Rep. Llew Jones of Conrad, who chairs the House Appropriations Committee, said beauty was in the eye of the beholder when it comes to the finer points of the budget, but overall it funds essential state functions for the next two years while keeping growth in spending low.

"This is a good budget," Jones said. "It will take care of Montana for the next two years."

Rep. Ed Stafman, a Bozeman Democrat, objected to a provision of the bill that clarifies legislative intent to end continuous eligibility for the state's Medicaid expansion program. Democrats argue this can kick qualified people off the program, while Republicans say checking enrollment eligibility more than once a year will keep people from defrauding the program.

"This policy idea was thoroughly vetted ... and was defeated on a bipartisan vote because it's awful policy," Stafman said, citing a policy bill to end continuous eligibility that was defeated. The provision was amended into the budget in the last week of the session.

In the final debate on the bill, House Democrats at one point were blocked from voicing their objections, triggering a brief leadership meeting below the House rostrum. Minority members were then allowed to speak. Moments later, GOP members stood in protest over comments from a Democrat that budget cuts were "in the name of fraud."

Other disputes over the budget echoed some of the major fights this session, including the $100,000 in funding for lawsuits filed over new laws that tighten access to voting and $285,500 to pay for a committee formed by Republicans to investigate allegations of bias and improper behavior in the judiciary.

Rep. Derek Skees, a Kalispell Republican, rose to support the budget, saying he normally votes against it but supported the bill this session.

"All the aggressive, strong, conservative values we passed in policy is funded by HB 2," Skees said. "That’s what this bill does."

Through the session, majority Republicans have advanced policies that died via veto over the last decade by a Democratic governor's pen. This session, many of those bills have already been signed into law by Republican Gov. Greg Gianforte, the state's first GOP executive in 16 years.

"It was disappointing ... to see how quickly Republicans abandoned their campaign promises on jobs and the economy and spent most of the session actually undermining the freedoms of Montana's kids and families," said House Minority Leader Kim Abbott, a Helena Democrat.

Republicans also passed Gianforte's tax plan, which the party estimates will reduce income and property taxes by $120 million over the two-year budget through lowing the state's top income tax rate and making other changes to things like the business equipment tax.

Not all of Thursday's action was so partisan, however. Another major component of the state's budget — legislation to spend about $2 billion in federal aid from the American Rescue Plan Act — cleared with broad bipartisan support, on a 90-10 vote in the House.

Rep. Frank Garner, the Republican from Kalispell who carried that bill, said it will provide transformational money to the state. It puts $275 million toward broadband projects in the state, as well as pays for infrastructure projects across Montana.

Though it cleared by wide margins, there was still conflict as some Democrats objected to a provision in the bill that cuts the matching rate the state will give local governments if they still have COVID-19 measures in place that are more restrictive than the state's.

But Rep. Jim Keane, a Butte Democrat, said he supported the bill because of its potential to dramatically change the trajectory of Montana.

"It's historic, it's unique and it's a gift," Keane said.

Senate Minority Leader Jill Cohenour said that while Democrats failed to advance major priorities, there were some successes.

"While many policy packages fail to gain the traction that needed in this session, Democrats were successful in shaping major pieces of policy," Cohenour said, citing the party leaving its fingerprints on the broadband provisions and broader ARPA bill, as well as defending what voters approved in the initiative that legalized recreational marijuana.

One defining piece of the session that will live on through the interim is a committee established to investigate the actions of judges in the state. That came out of a lawsuit filed challenging a bill that gives the governor direct appointment power in the case of judicial vacancies, one of several moves by the GOP to change the judicial branch this session.

"We stood up for the legislative branch," Blasdel said. "We said 'You know what, we are equal parts of government.'"

Abbott, who sits on the committee that will investigate the judicial branch, called the process an overreach that is meant to smear a co-equal branch of government.

As the session ground toward adjournment, lawmakers made a frenzied bid to push leadership for a brief conference committee in an effort to plug amendments to a bill that would have changed funding mechanisms in the marijuana implementation package passed by both chambers. One amendment would have taken the tax revenue away from the general fund and moved it to trust fund to pay for what some GOP lawmakers called the societal costs of recreational marijuana. The effort passed the House, but died in the Senate just before both chambers adjourned.

Democrats, after the session adjourned, accused some Republicans of holding the budget hostage in exchange for the late changes to marijuana implementation. The attempt put both chambers on a hiatus that went several hours into the afternoon and required additional hustle by legislative staff to prepare the amendments.

Republican Sen. Bob Brown, who voted for the changes in the committee, had reversed course by the time the matter reached the Senate floor, saying the amendment was "too much too late."

"Last year 81,000 Americans died of opioid addition and abuse," Boldman said. "What we do today could not only change lives, it could end lives."

On Wednesday "cleanup" legislation for Montana Fish, Wildlife & Parks became one of the most hotly debated hunting bills of the session. A late amendment to House Bill 637 allows outfitted nonresident hunters who were unsuccessful in getting a big game license this year in the lottery to purchase one. It also revamps nonresident preference points to give hunters using an outfitter an advantage in the draw over do-it-yourself hunters.

Lawmakers also carried a plethora of bills aimed at changing the state's response to the pandemic, from a bill to provide a legal liability shield for businesses that led to Gianforte lifting the statewide mask mandate and new laws that limit public health officials' previous power to enact public health restrictions.

— Reporters Seaborn Larson and Tom Kuglin contributed to this story.

Photos: The final day of the 67th Legislative Session

One of the biggest points of contention is a provision that reduces the amount of matching money for municipalities that still have more restrictive public health mandates than the state's.

The bills passed generally with GOP support and Democratic opposition.

The corrections department began holding men aged 18-26 at the facility in 2016, where they are kept out of sight and sound of the youth, following a federal policy.

“To be able to call somebody, get somebody that specializes in perinatal mood disorders to really help these women on the spot, is just amazing for us,” said Christie Weseman, a certified nurse midwife. 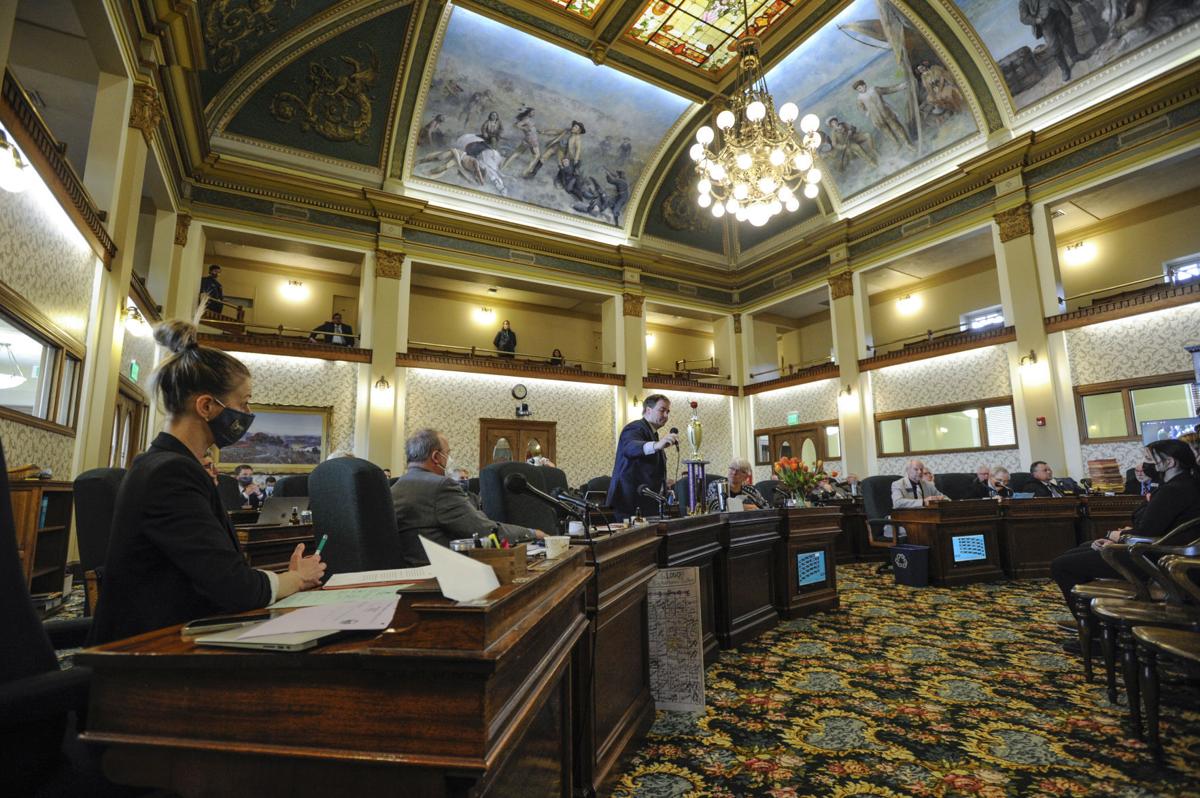 Senators debate bills on the final day of the 67th Montana legislative session. 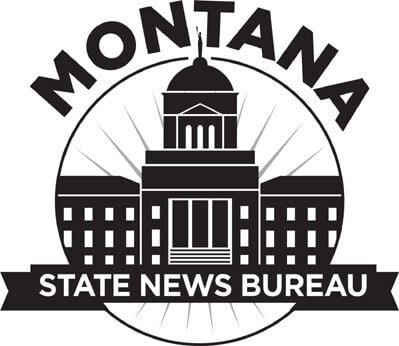