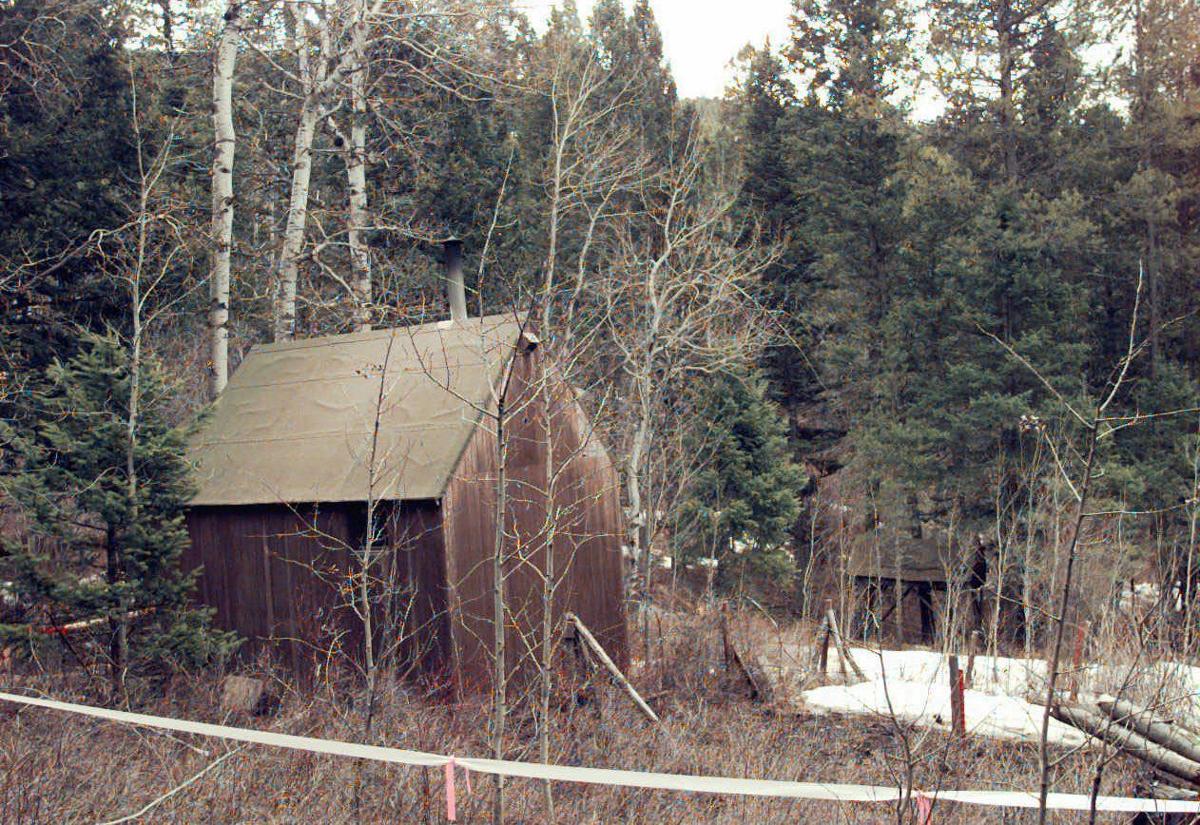 The cabin of Theodore Kaczynski sits at the end of a muddy, private road in 1996, in Lincoln. The 1.4-acre home had no electricity or plumbing. 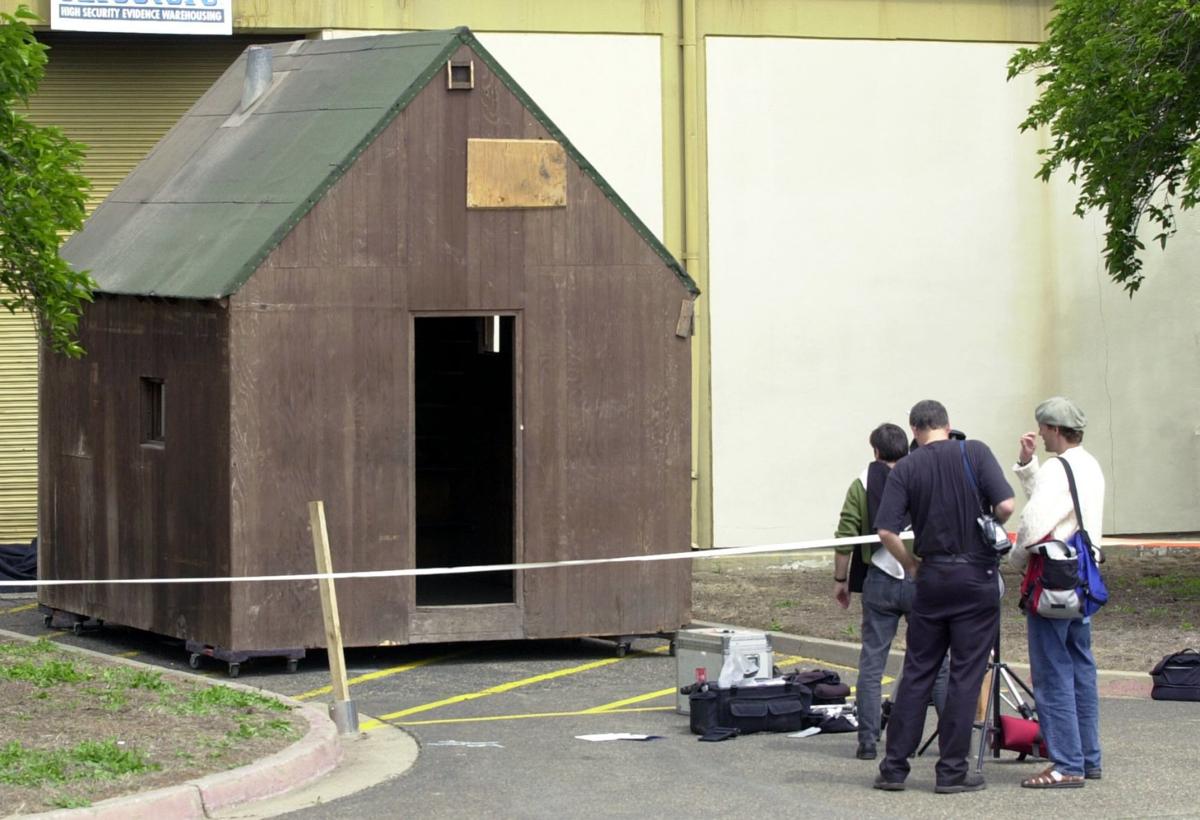 Members of the press outside the cabin of Theodore Kaczynski after it was moved out of storage facility in Rancho Cordova, California, in 2003.

After being on display for at least a decade in a Washington, D.C., museum, the cabin where Unabomber Theodore Kaczynski lived outside Lincoln is set to return to the possession of the FBI — unless the state historical society can bring it back to Montana.

Kaczynski's cabin has been at the Newseum since 2008. But the museum, which featured exhibits related to the media, is closing at the end of the year because of longtime financial issues.

A representative for the Newseum said earlier this month it will return the cabin to the FBI, which owns it, in early 2020. And the FBI said this week it will put the cabin on display at a museum called FBI Experience at its Washington, D.C., headquarters.

But Bruce Whittenberg, director of the Montana Historical Society, said Thursday his organization has been watching what's unfolded with the Newseum closing and is interested in bringing the cabin back to the Treasure State. Though it's not clear yet how that could work, Whittenberg said the society is "interested and will be reaching out."

In 1971, Kaczynski moved to land outside the small town of Lincoln and built the isolated 10-by-12-foot shack, where he lived for 25 years. From 1978 to 1995, it was his home base for orchestrating 16 attributed bombings that killed three people and injured another 23 around the country.

He was arrested in 1996, after news outlets printed his anti-technology manifesto and a family member recognized it could have been written by Kaczynki.

The FBI raided his cabin and seized property, including bomb-making supplies and thousands of pages of Kaczynsk’s writings. Many of the items were auctioned off to pay toward $15 million in restitution to his victims.

In late 1997, Kaczynski's defense attorneys paid to send the plywood structure by trailer from Lincoln to Sacramento, a journey of more than 1,000 miles, so jurors in Kaczynski's murder trial there could see it for themselves. It was reported at the time the home, which had no running water and multiple locks, would be used as part of a legal strategy to show Kaczynski was mentally ill.

A man from Ennis drove the cabin to California, followed by photographers, to what was once Mather Air Force Base.

Kaczynski ended up pleading guilty in January 1998 and is serving life in prison without the possibly of parole at the federal maximum-security prison in Colorado.

In 2003 Kaczynski tried to transfer ownership of the cabin to Scharlette Holdman, a defense attorney, but the FBI ended up with it. For 11 years, the Newseum has had the cabin in an exhibit on loan from the FBI. After it first went on display, Kaczynski objected to it being shown there.

In a letter to the 9th U.S. Circuit Court of Appeals in 2008, Kaczynski argued displaying the cabin subjected his victims to further publicity. At the time, Susan Bennett, the vice president and deputy director of the Newseum, told the Associated Press:

"I think what's interesting is, after all these years, that Ted Kaczynski would be concerned about the exhibit's impact on his victims."

After years of trying, the state Legislature earlier this year passed a bill to build a new, larger Montana Heritage Center. The first meeting of combined committees working on the project — groups that will help the Department of Administration director select the location of the new museum — was scheduled for Friday in Helena.

Making headlines since 1865: A historical look at the IR and its lineage

When the FBI arrested “Unabomber” Ted John Kaczynski at his cabin near Lincoln in April 1996, the Independent Record was there.

An independent film about the Unabomber is holding open casting calls in Helena on Saturday, Missoula on Sunday and Lincoln on Monday.

Retired FBI agent and Helena resident Tom McDaniel will be featured on the CNN show "Declassified" Saturday evening, talking about his and the…

Helena will get $300K to provide fire protection at Fort Harrison

The city of Helena has signed a contract with Fort Harrison to provide firefighting protection.

The cabin of Theodore Kaczynski sits at the end of a muddy, private road in 1996, in Lincoln. The 1.4-acre home had no electricity or plumbing.

Members of the press outside the cabin of Theodore Kaczynski after it was moved out of storage facility in Rancho Cordova, California, in 2003.