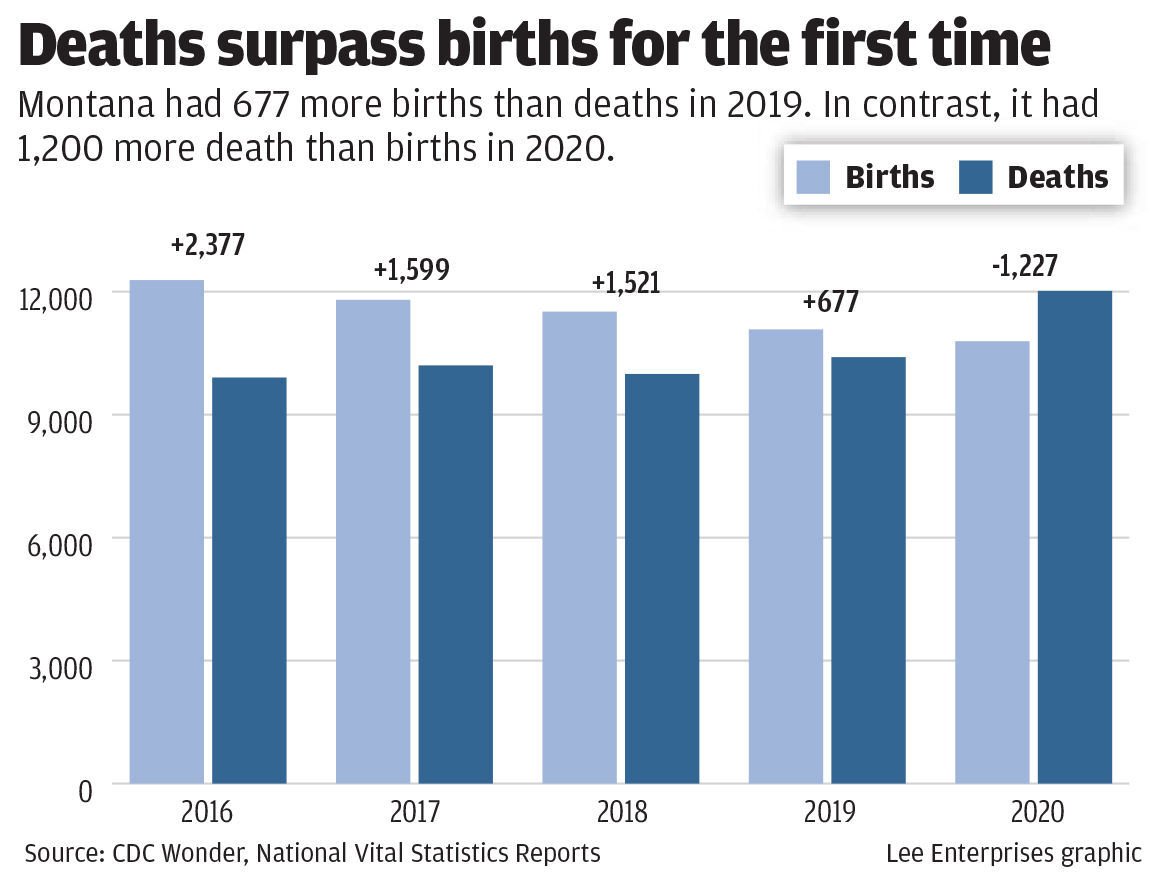 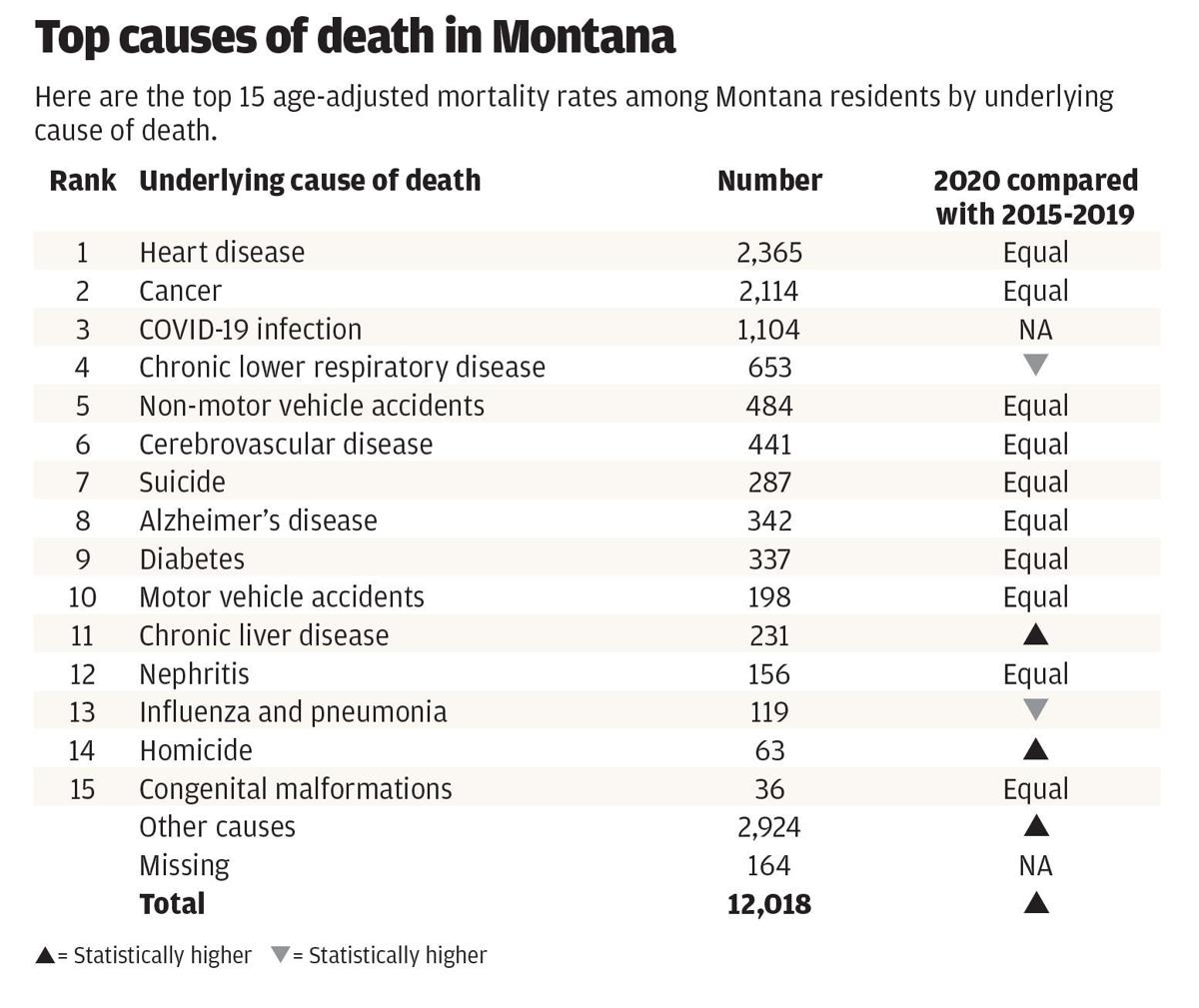 During the pandemic Montana saw more deaths than births for the first time since that data has been tracked.

Early and provisional data from the state health department and a report compiled by a demographer, document the stark statistics for 2020, a year dramatically altered by the pandemic.

Montana’s mortality rate increased by 14% in 2020, according to the Department of Public Health and Human Services. There were 12,018 deaths compared to 10,791 live births — the first time deaths surpassed births since 1908, when records started being kept.

COVID-19 was the third-leading cause of death in Montana last year, though deaths from other causes also rose.

Nationwide, 25 states reported more deaths than births — this was the first time that happened in all but five states.

Kenneth M. Johnson, senior demographer at the Carsey School of Public Policy and professor of sociology at the University of New Hampshire and an Andrew Carnegie Fellow, produced the report documenting the change across the country.

In an email this week, Johnson said COVID-19 had a “dramatic and immediate impact on deaths in the U.S.”

That includes deaths caused directly by COVID-19 as well as things like “people delaying treatment for other diseases, being reluctant to get medical tests that might have detected disease early and deaths that may have occurred because people were reluctant to go to a hospital if they had chest pains” and more, Johnson wrote in an email this week.

In 2019, births outpaced deaths in Montana by 677. But last year, there were 1,200 more deaths than births, according to Johnson. Bordering states like Wyoming and the Dakotas also saw similar trends.

When it comes to the birth rate, Johnson said the impact of the pandemic has been more gradual and showed up in the data at the end of 2020 and early this year, about nine months after the start of the pandemic.

“One key future question is how much impact COVID will have on fertility, which was already at record low rates in the U.S. Will women who delayed having babies have them later, or forego them entirely? We simply don’t know yet,” Johnson said.

Since the Great Recession, the number of births has been dropping in the U.S., Johnson said, while deaths have risen as the country’s population gets older.

Rich Rasmussen, the president and chief executive officer of the Montana Hospital Association, said the economy plays a factor in fewer births.

“People who are dealing with the pandemic, if they were uncertain about their income, and we had a lot of folks like that, they were unemployed and didn’t know when the economy would get back to normal, when we have that happen in the economy, birth rates go down,’ Rasmussen said Friday.

In Montana last year there were approximately 1,900 excess deaths in 2020 compared to the average over the five previous years, according to DPHHS data. The state marked 1,104 COVID-19 deaths last year (and 1,641 to date), meaning that deaths from other causes have also increased.

Data from DPHHS included in a March 15 report and quarterly provisional estimates from the Centers for Disease Control and Prevention’s National Vital Statistics System show slightly different information since they track different metrics, but both document the additional deaths over years past.

The CDC, for example, shows the crude death rate for diabetes in Montana, both in terms of comparing the fourth quarter of 2020 with the same period in 2019 and over the year-long period, saw a statistically significant increases. However, DPHHS’s data shows last year’s deaths from diabetes didn’t change in a significant fashion over the last five years’ average.

“We don’t have data to tell us exactly why this was observed,” said Jon Ebelt, a spokesperson for DPHHS, in an email Friday of increased deaths from causes besides COVID-19. “However, what we do know is that in the early months of the pandemic, there was a decrease in the number of emergency department visits in Montana and the U.S.”

Ebelt pointed to CDC data showing visits across the country for life-threatening conditions decreased from January through May last year, as states including Montana urged people to adopt measures to slow the spread of the pandemic. While people were still told to go to the doctor when they needed care regardless of things like stay-at-home orders, there was fear about the spread of the airborne virus, as well as other hurdles to accessing care.

In Montana, many hospitals and health care facilities delayed elective procedures, though they remained open for emergency and urgent care that could not be delayed.

“The phenomenon of people delaying care may have contributed to the overall increase in deaths that were not COVID-19-associated,” Ebelt said.

“People genuinely were concerned about the potential transmission of disease in our facilities and so they waited until they really needed to come to the hospital,” Rasmussen said. “What we’ve seen since then is higher complication rates as people are coming back. They’re sicker when they’re coming back. Before they would have received care earlier in the episode of illness.”

Hospitals pushed back elective procedures because that would not have an impact on a person's health going forward, Rasmussen said, but also tried to make sure the public knew facilities were open and safe for care that couldn't be delayed.

Stay-at-home measures may have also led to what both data sources show was a drop in deaths from things like influenza, pneumonia and chronic lower respiratory diseases in Montana decreased in 2020.

The DPHHS report said this “was likely due to decreased influenza activity in the U.S. and elsewhere in 2020 — which coincided with COVID-19 mitigation measures.”

In Montana, heart disease accounted for and cancer were the first and second leading causes of death last year and in the five prior years. Last year heart disease killed 2,365, cancer killed 2,114 and COVID-19 killed 1,104.

Both the state and federal data show no statistically significant increase in suicides in Montana during the pandemic, even as people navigated serious mental health challenges posed by everything from fear about their health to job loss and isolation.

Rasmussen attributes that to the 1,400% increase in the number of behavioral telehealth visits during the pandemic, made possible in part by changes allowed by the state and federal government and insurers who followed suit.

“Even though (people) were struggling with their mental health, they still had access to care through telehealth,” Rasmussen said.

One bright spot is the availability and uptake of vaccines, which have slowed death rates across the country and in Montana. During a weekly call with the media, Gallatin County Health Officer Lori Christenson said Friday that her county is trending in the right direction when it comes to new cases, hospitalizations and deaths — because people are getting vaccinated.

“With an increase of vaccination rates and availability, we’ll continue to see the death rate decline. That’s one of the main drivers and the importance of getting this vaccine, is it does reduce the potential for serious illness and death,” Christenson said.

According to DPHHS, just over 398,400 Montanans were fully vaccinated as of June 4. There have been 198 breakthrough infections of vaccinated people, or just 1.3% of cases identified, during the period since people started getting shots. Twenty-two of those people were hospitalized and two died.

What might happen with the birth rate is harder to predict, Johnson said.

“We simply don’t know yet what the long term impacts on fertility will be,” Johnson wrote.

The best comparison available, Johnson said, is the influenza pandemic in 1918 and 1919, but he also said that it was a “very different country in a very different era.”

More people died in that pandemic and while births slowed then too, the rate recovered in a few years.

“It is not clear whether that will happen again,” Johnson said.

US to require COVID-19 shots for foreign visitors

US to require COVID-19 shots for foreign visitors

While not fully representative of students and educators across the state, the responses give the office an idea of trends.

Some see clarity, others concerns on critical race theory opinion

Some, including the Democratic members of the state's American Indian Caucus, worry a lack of clarity could have a chilling effect on the state’s constitutionally required Indian Education For All program.