A District Court judge has ordered sanctions against the Montana Highway Patrol, the defendant in a civil lawsuit filed by an injured driver, for failing to keep evidence in the case stored as required by its own policy.

The Montana Highway Patrol, a division of the state Department of Justice, is the only defendant named in the lawsuit filed by a Wyoming man who had to drive off the road to avoid a collision with a trooper in August 2017. But among those who are named in court records detailing how the agency lost copies of the video include Steve Lavin, a major in the MHP at the time of the crash recently named to the top post of the patrol.

Lewis and Clark County District Court Judge Kathy Seeley in December ordered sanctions against MHP for spoiling the video evidence that captured the near-miss accident. At trial, the jury won't determine whether or not MHP is liable for the driver's injuries, only how much MHP owes the driver, Mitchel Burgess of Gillette, Wyoming.

In her order, Seeley identified three points in which MHP lost, or in her term, "spoiled," the video: once, when MHP staff apparently removed the computer where the file was stored from the office and then lost it; again when the records staff appeared to have failed to tag the file properly for storage, despite agency policy the video be stored for five years; and again when the physical copy of the video, a DVD, was lost in Lavin's office.

The breach of its duty to properly store the video led Seeley to order sanctions against the MHP to be applied at trial, which was scheduled this week for August. 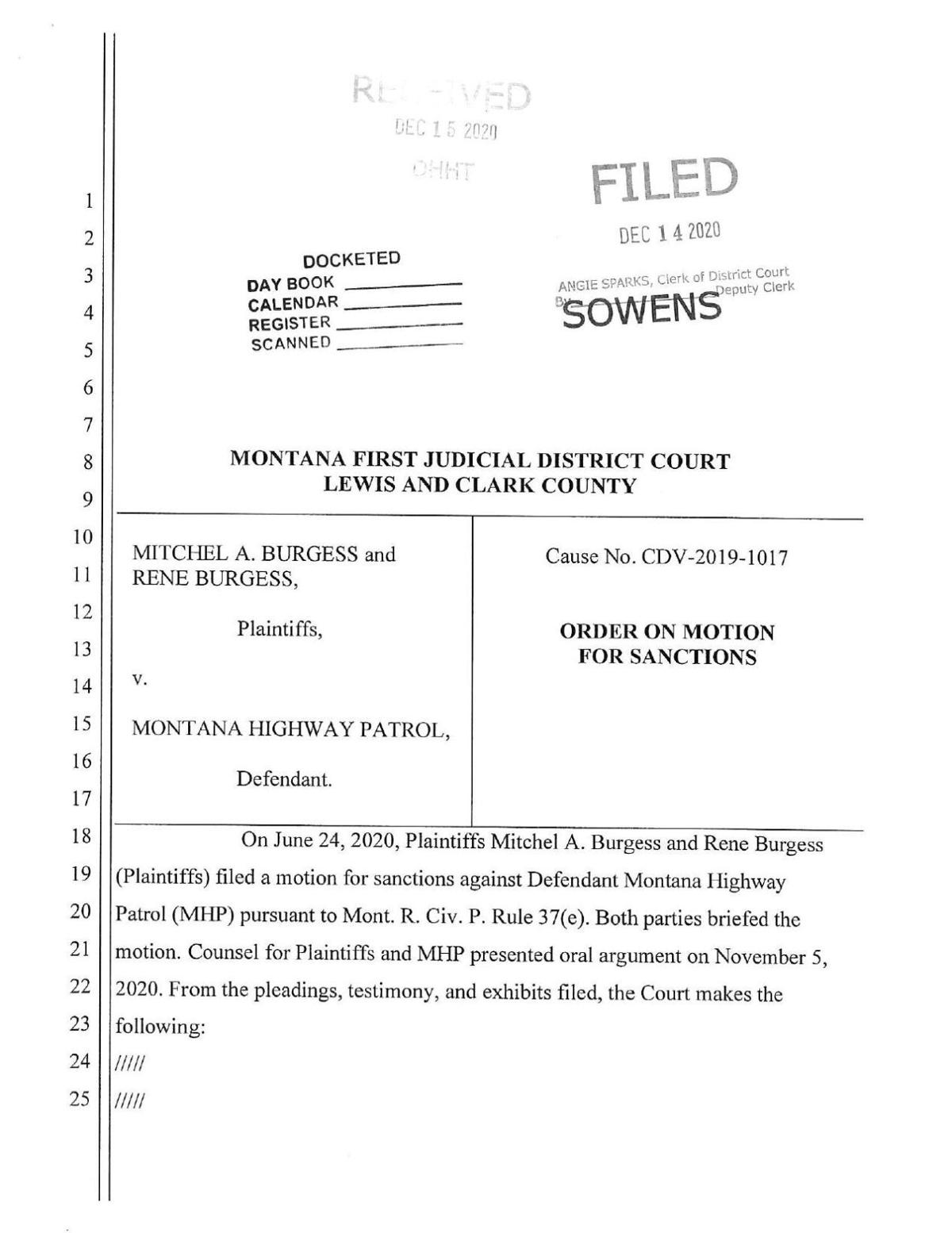 A spokesperson for the Department of Justice on Thursday said the department does not generally comment on active litigation. The spokesperson also declined to answer questions about if newly-sworn in Attorney General Austin Knudsen, a Republican, knew of Lavin's role in the MHP's mishandling of evidence in the case when he appointed Lavin chief of the MHP. The appointment came two days after Seeley's order on sanctions against the agency.

Republican Tim Fox was attorney general when the incident occurred in 2017 and the video was lost.

In a trial brief filed Jan. 21, back when the case was scheduled for a Feb. 8 trial date, attorneys for MHP asked the judge to suppress any mention by the plaintiffs of the agency's conduct in bungling the evidence so as to not prejudice the jury. MHP's attorneys also challenge the lost wages claims by Rene Burgess, Mitchel Burgess' wife and the other plaintiff in the case, for her time driving her husband to medical appointments. 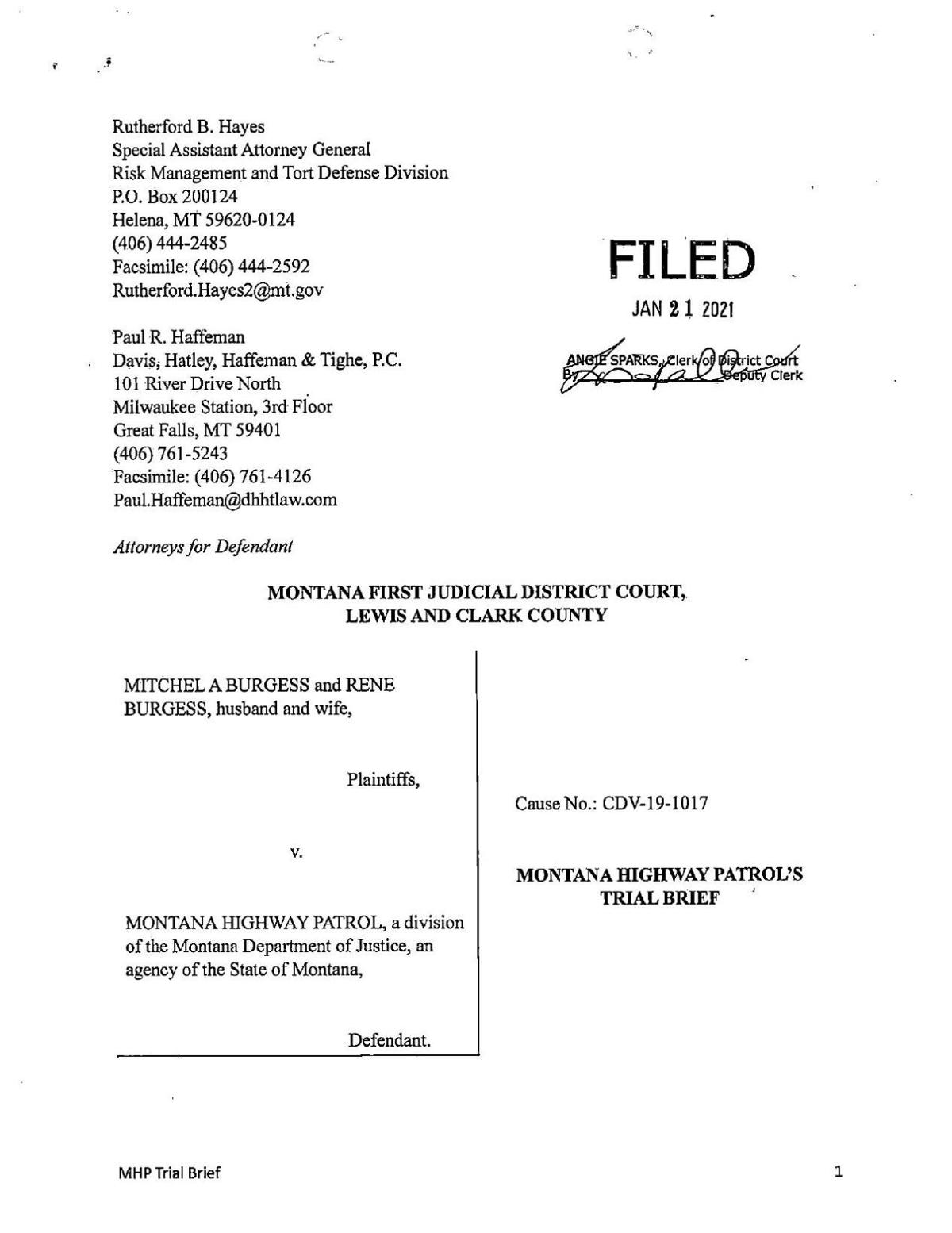 Eight days after the near-crash on Highway 59 near Miles City, Mitchel Burgess contacted the Montana Highway Patrol to report the incident. Trooper Michael Howell had been parked on the side of the road for a traffic stop, and pulled an "illegal U-turn," according to Seeley's order, in front of Burgess' pickup. That caused Burgess to drive off the highway in order to avoid colliding with the patrol car.

Burgess said he had a concussion and an MRI weeks after the crash revealed two bulging discs and one ruptured disc in his spine.

But additional information provided by MHP in the discovery process indicated files were not corrupted, and instead lost by the MHP. In the July 2020 deposition, for example, Hildenstab told Burgess' attorneys that MHP had lost the recording. The office computer "more than likely … had the video on it," Hildenstab said, according to court filings. However, that office computer "got removed from the office" and was not recovered.

Still, Hildenstab said during the deposition, the video should have been held on the MHP server, albeit the video could not be located on the server. Hildenstab told attorneys the only explanation was that someone had failed to properly tag the video for administrative review.

Additionally, a hard copy of the video, a DVD, had been produced and shipped to the then-Major Lavin. In the MHP chain of command, Lavin was third. The colonel is the top post, followed by lieutenant colonel and three majors. Hildenstab said he had also looked through Lavin's office, where "thousands" of similar DVDs are stored at the agency's headquarters, and could not find the DVD.

The MHP's policy states audio and video "which are not evidence in criminal proceedings but may be used in civil proceedings" should be maintained for five years, according to court filings.

During the deposition, Hildenstab stated Howell was “counseled” for the U-turn that caused Burgess to go off the road. 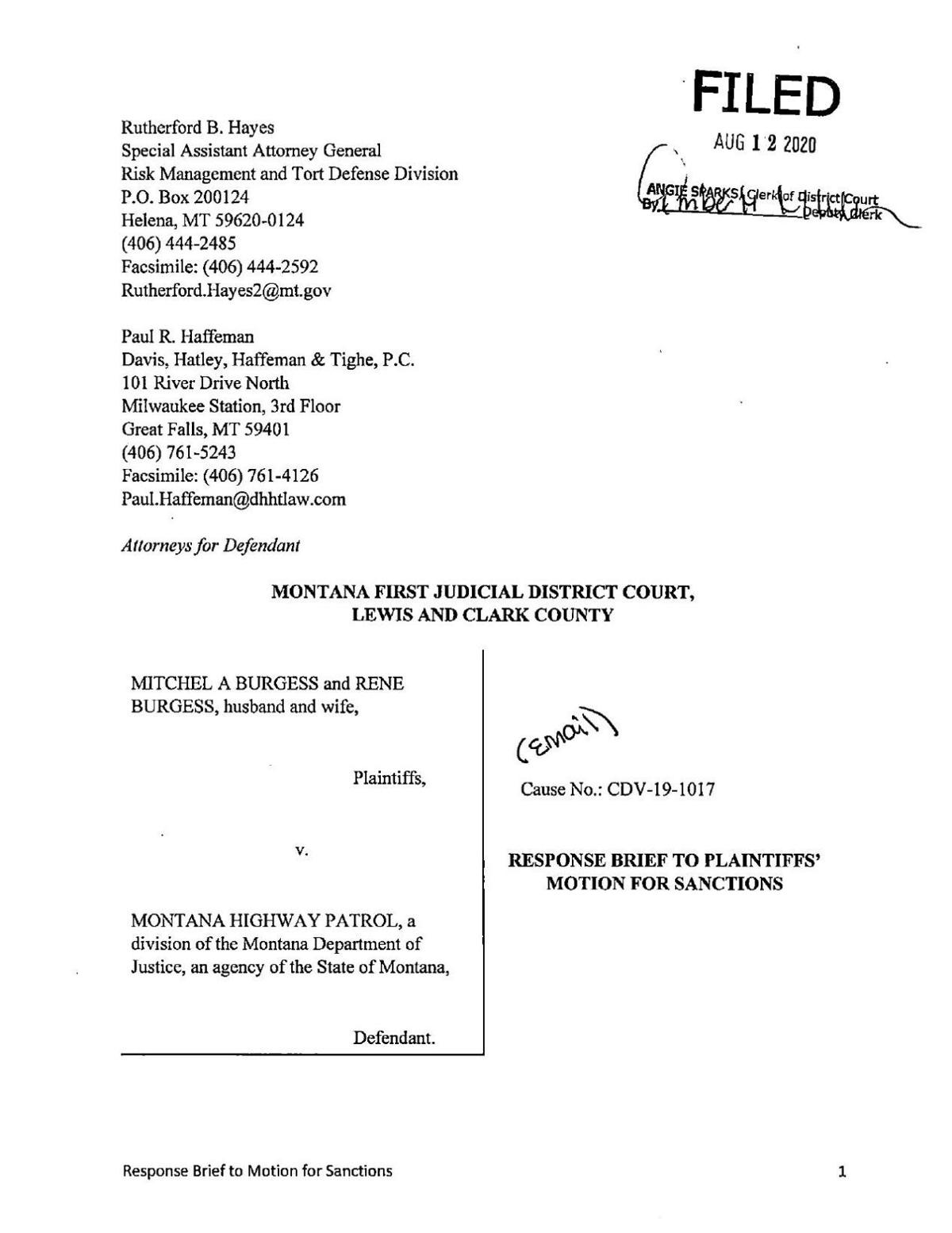 Hildenstab also said, to his knowledge, there have been no other instances of lost video evidence such as this at MHP.

In 2020, a Great Falls woman filed a civil lawsuit against law enforcement officials leveling a similar allegation of lost evidence. The local probation and parole office claimed to have lost dash cam footage of a scene where law enforcement arrested a man with a probation violation. The video showed one officer, late to the scene, had tackled the man’s mother who stood nearby and broke her arm, according to the lawsuit. That case is still ongoing.

In 2009, the Missoula Police Department was sanctioned after it claimed to have lost the in-car video footage of officers pushing or tackling a 68-year-old man who had refused officers' orders to move away from an armed suicidal woman he was trying to assist. The department settled with the man after the sanction for $365,000.

In his deposition, Hildenstab said the department had made no changes as a result of the "lost" video evidence.

"Nothing has been changed," he told McLean, Burgess' attorney. "I don't — the procedure feels pretty solid as it is. It's unfortunate it got lost in this case. It definitely would be a rarity. It's not an ongoing problem any policy that I feel from my level needs to be changed."

As part of the sanctions against MHP for mishandling the evidence, Seeley ruled the agency could not bring two expert witnesses it had retained to testify on the physics of the crash site. Those included Dr. Scott Noll, a technical specialist at Inverse Scientific, LLC, in Blacklick, Ohio, and Dr. Raymond David, principal at Trauma Biomechanics in Redondo Beach, California.

The state spent $38,618 on the two witnesses before they were excluded from testifying at trial.

"One thing I hear all the time is what are we going to do about these judges, all the decisions they make?" Sen. Steve Hinebauch, R-Wibaux, said Friday.

"What are you accomplishing with this?" Missoula Fire Marshal Dax Fraser asked the legislative committee. 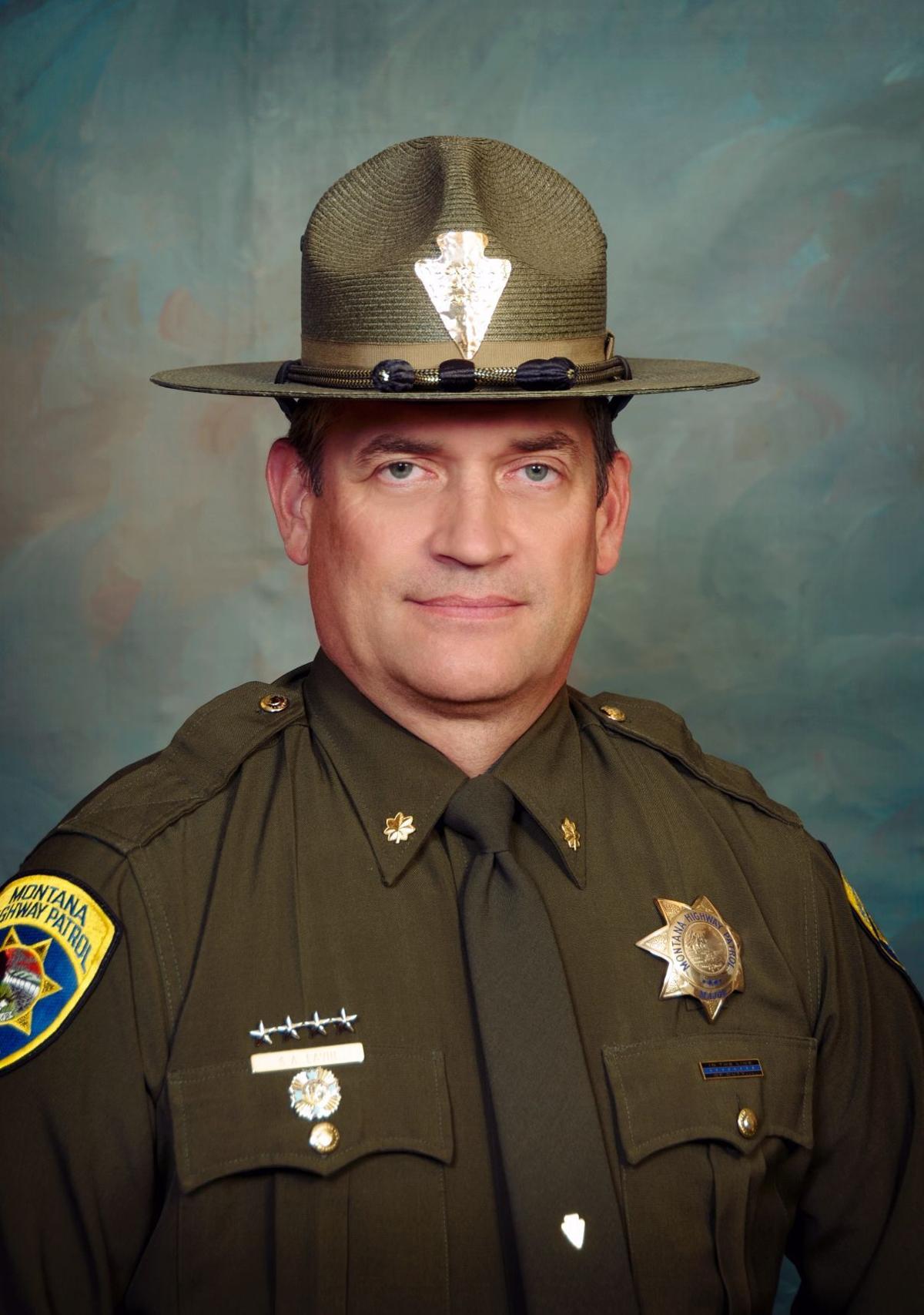 Major Steve Lavin, of the Kalispell division of the Montana Highway Patrol, has been tapped by Attorney General-elect Austin Knudsen to lead the state police agency. 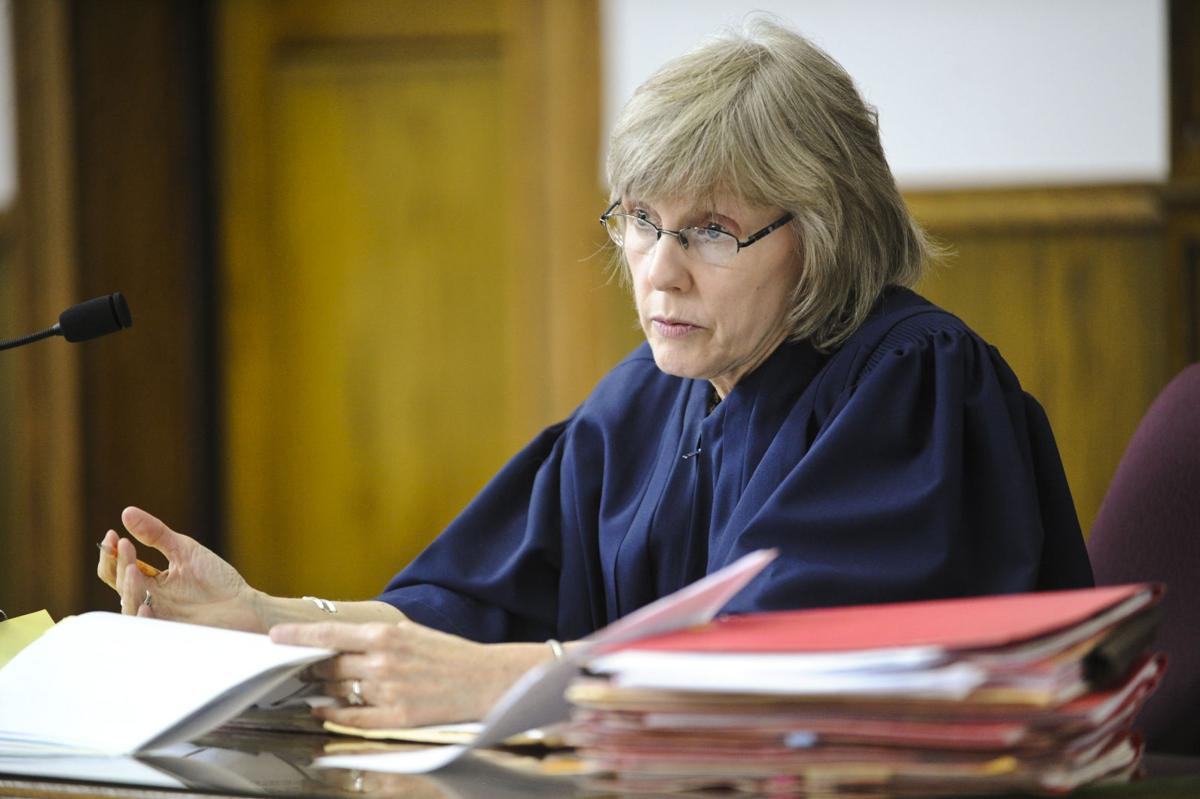 District court judge Kathy Seeley pictured in her courtroom in the Lewis and Clark County Courthouse in Helena in May 2015. 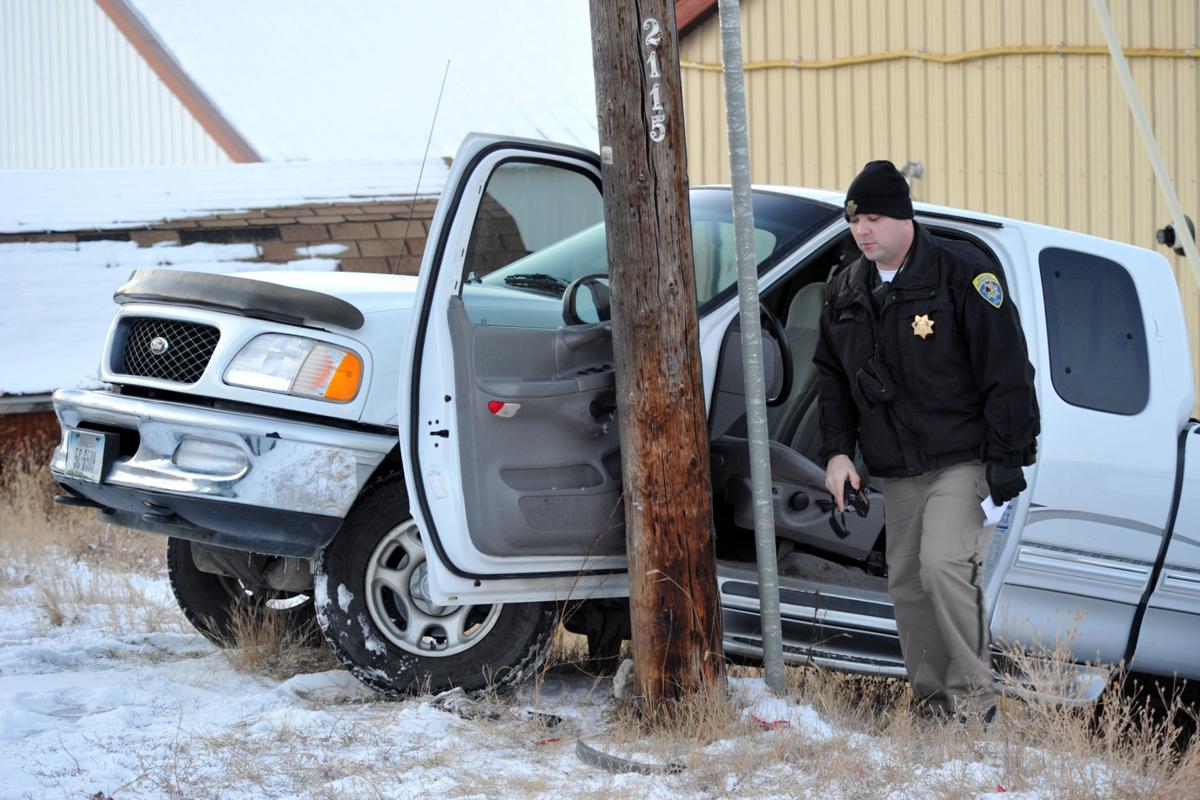