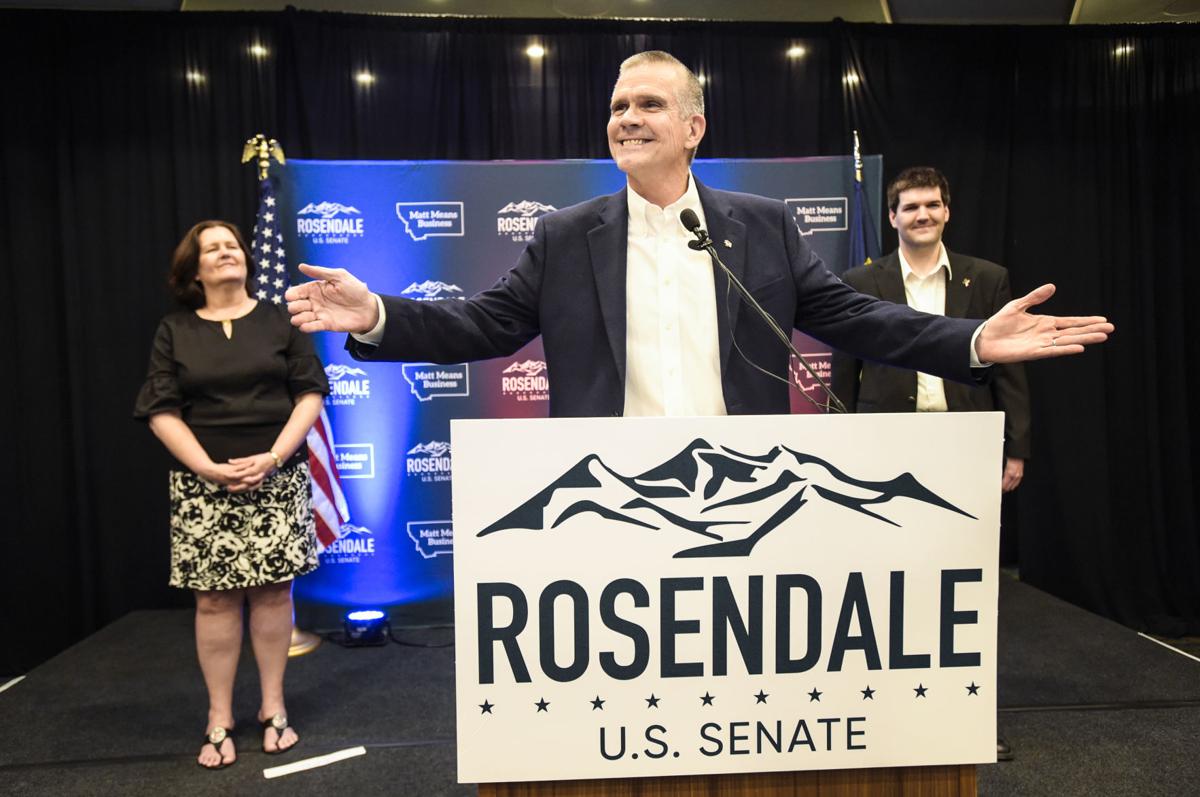 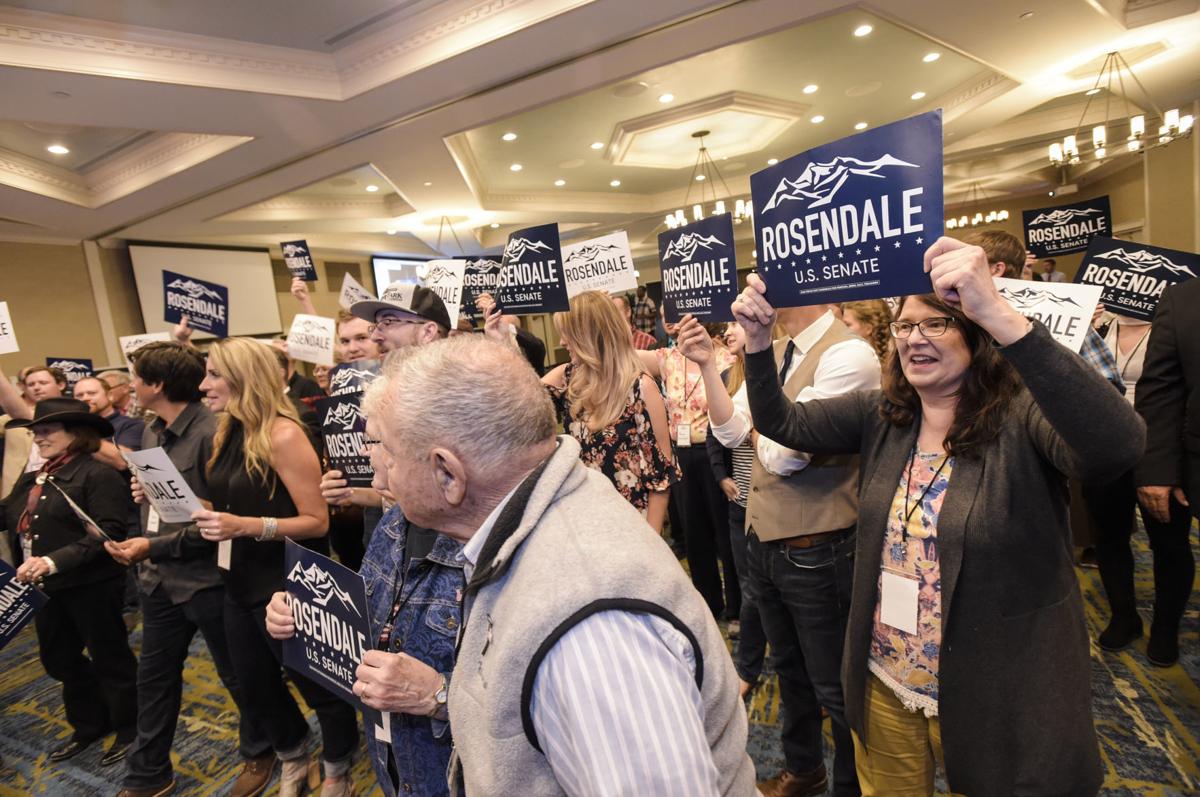 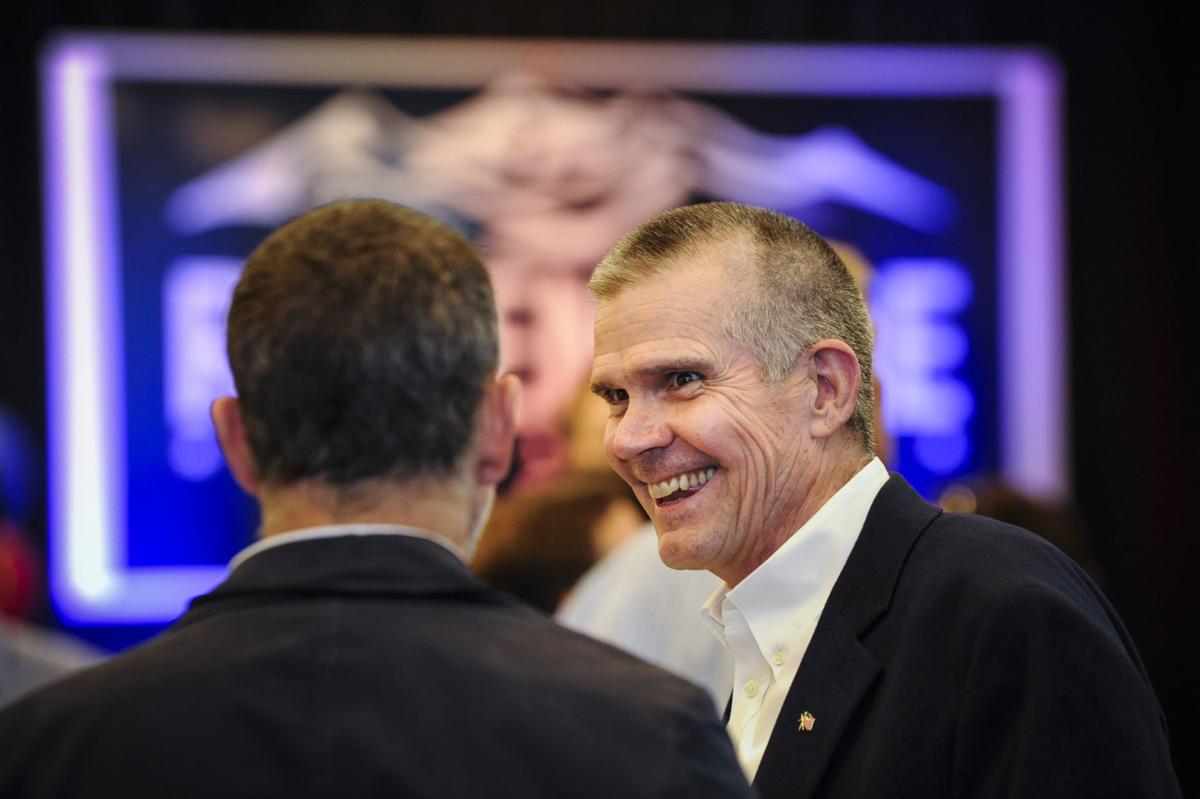 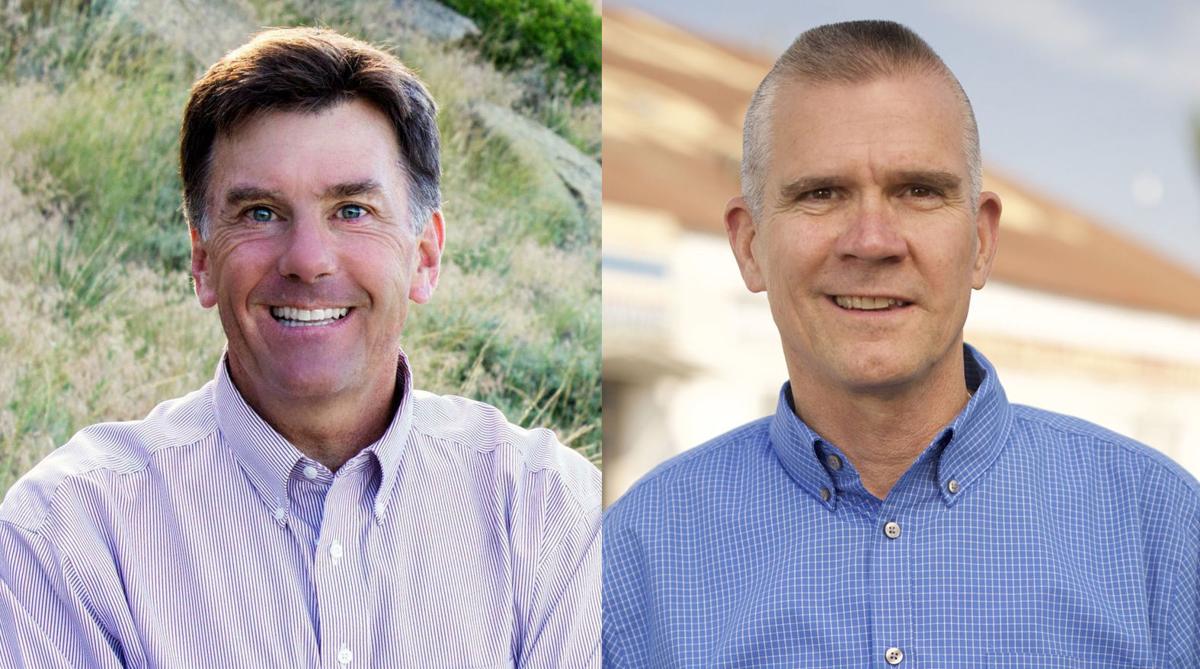 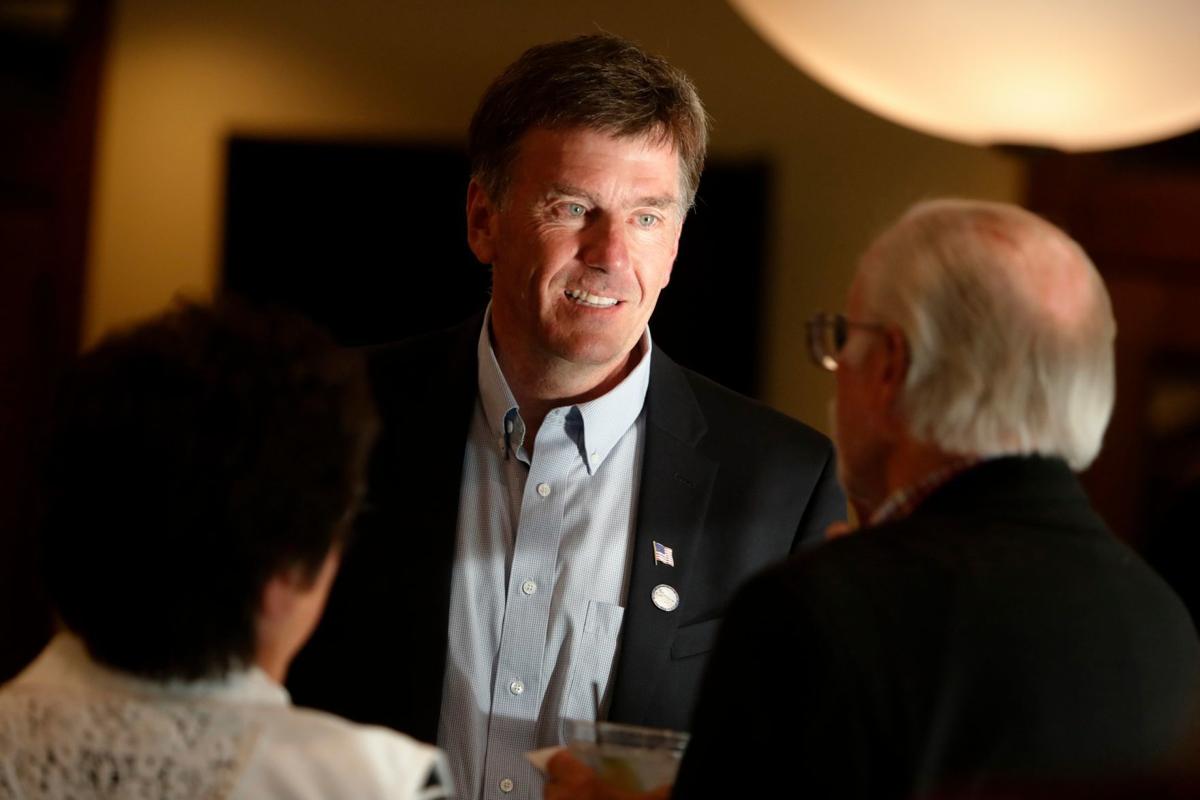 U.S. Senate candidate Russ Fagg talks with supporters during a primary election night party at the Hilands Golf Club in Billings on June 5, 2018. 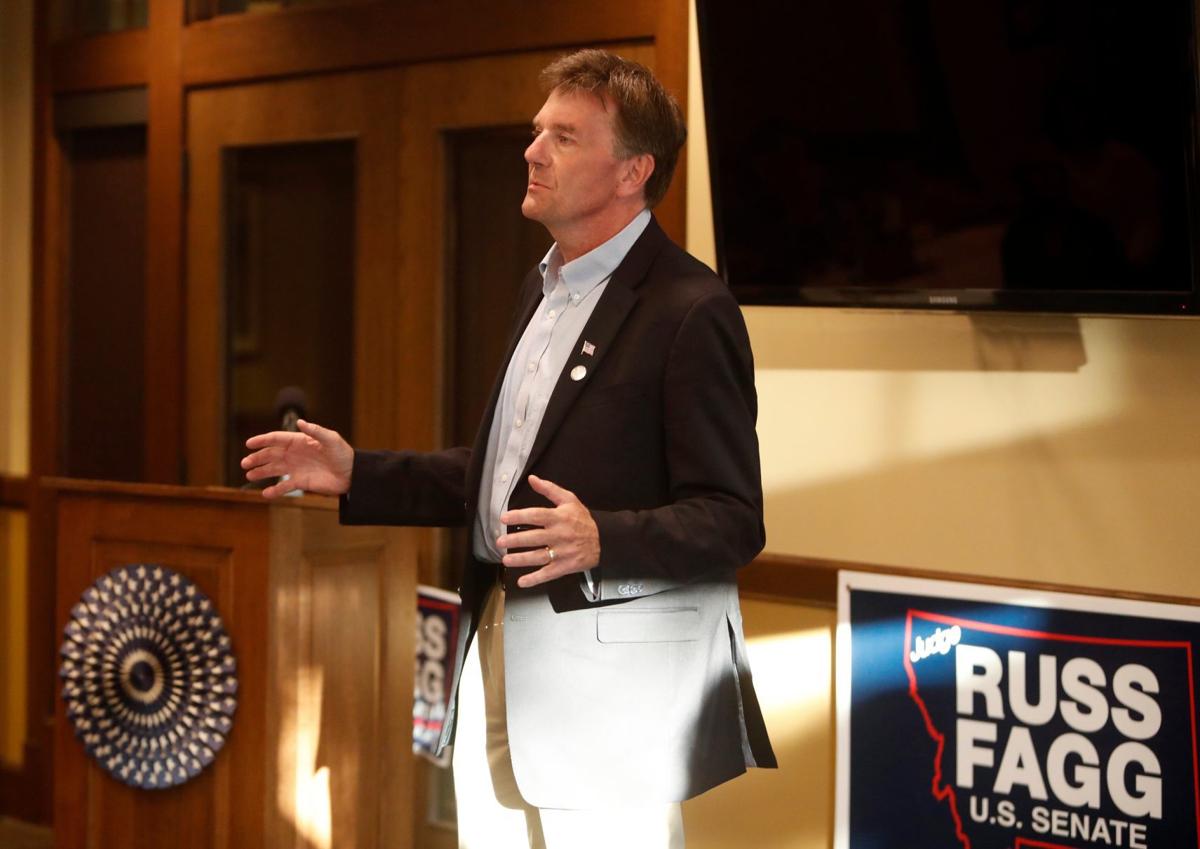 U.S. Senate candidate Russ Fagg talks with supporters during an election night party at the Hilands Golf Club in Billings on Tuesday. 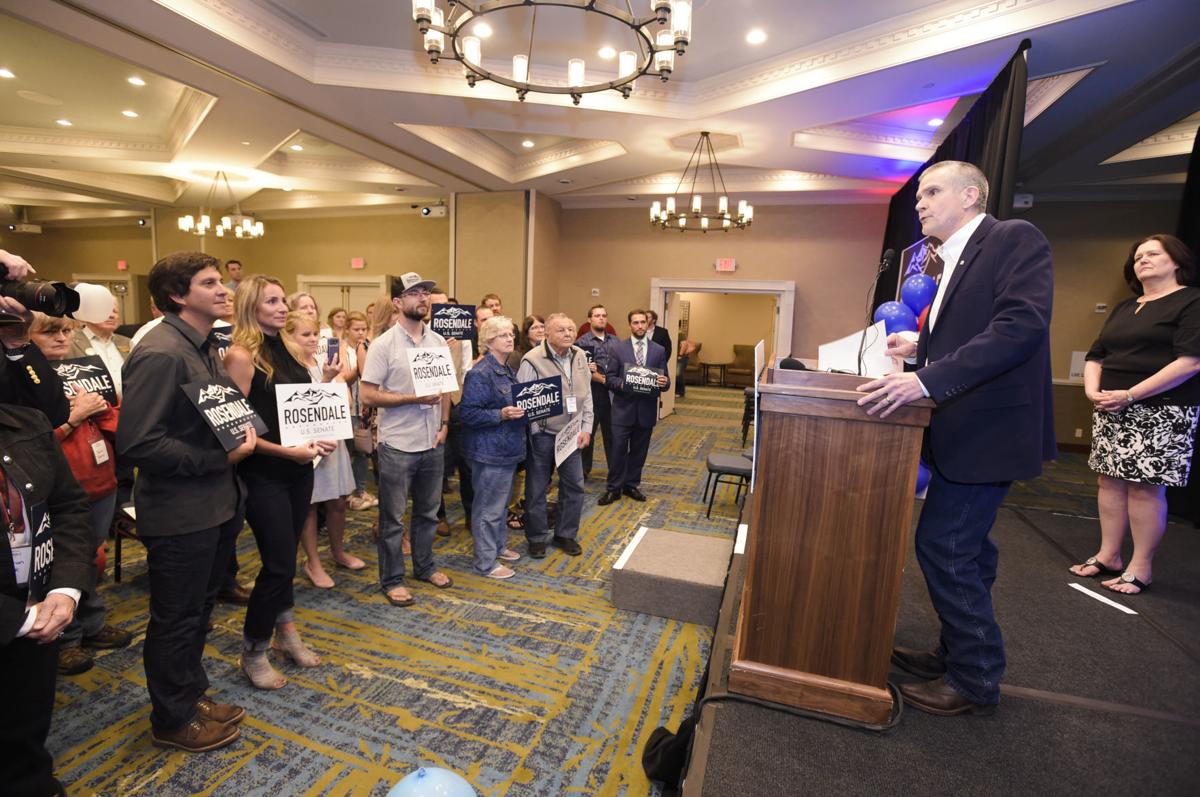 Rosendale won with an unofficial 33 percent of the vote to Fagg's 30 percent.

The U.S. Senate race was at the top of the ticket, a four-way contest among Rosendale, Fagg, Big Sky businessman Troy Downing and state legislator and Kalispell doctor Al Olszewski.

Addressing a crowd of about 70 supporters just before midnight at a hotel in Helena on stage with his wife, Jean, and one of his sons, Rosendale quickly moved past his victory and on to focus on the general election against incumbent Democratic U.S. Sen. Jon Tester, who is seeking his third term.

“This is what we’ve been waiting for,” Rosendale said. “Thank you Montana. The battle of the flat-tops has begun.”

Rosendale was referring to Tester’s trademark haircut — and his own.

Democrats, however, are mobilized nationally in an effort to capitalize on anti-Trump sentiment. While Democrats have looked more to winning back the U.S. House, the party must also hold onto Senate seats like Tester's.

Fagg outperformed Rosendale in Fagg's home county of Yellowstone, the state's most populous. However, Rosendale got a higher percentage of votes from the state's other large counties.

Fagg congratulated Rosendale on Tuesday night and said he'd support him in November. He also thanked his supporters, saying he was "glad he jumped into" the race.

Rosendale, the state auditor who has the boost of statewide name recognition after a handful of previous runs for office, was seen early as the front-runner. He gained attention and financial backing from national Super PACs, drawing just shy of $2 million in support from groups like the Senate Conservatives Fund, the Americans PAC and Restoration PAC.

Other groups, such as Club for Growth Action, also spent $1.2 million attacking Fagg, seen by some as Rosendale’s closest challenger.

Fagg painted himself at times as the more center-right candidate. Some of his later television ads, however, appealed to the more conservative wing of the party. Fagg made a strong late push in the race, with his fundraising numbers nearly matching Rosendale's over the last months of the election. Rosendale pulled in more than $1.2 million in total contributions, while Fagg got just over $1 million.

Downing raised the most of any candidate, pulling in $1.4 million, though about three-quarters of that was his own money. Olszewski mostly stayed out of the fray during the election. He raised the least amount of money but used that as a positive point through his campaign, saying he wasn't tied down to any corporate or political interests.

Trump played an outsized role in the race, with candidates mostly rushing to agree with a president who retains popularity in Montana. Trump went after Tester in May when the senator made public concerns that had been brought to him over the past behavior of Trump's nominee to head the Department of Veterans Affairs.

Fagg, along with the Montana Democratic Party, repeatedly dinged Rosendale and Downing for not being from Montana originally. Rosendale moved to Montana from Maryland in the early 2000s and Downing from California around 2009.

Their status as non-Montana natives hampered both candidates to some degree. Downing is facing criminal charges for purchasing resident hunting and fishing licenses when he was not a resident, and his trial recently was pushed back to after the primary vote. Rosendale in 2015 mistakenly signed a real estate form saying he was a Maryland resident.

“The choice for Montanans this November couldn’t be more clear. Jon Tester is a third-generation Montanan who still farms the land homesteaded by his grandparents. … Matt Rosendale is an East Coast developer who looks out for himself."

The Montana Green Party, which qualified to get its candidates on the ballot on the last day possible, also has a contested primary in the U.S. Senate race between Steve Kelly, a longtime party member and supporter, and Tim Adams, who has previously been on the payroll of the Montana GOP. Kelly had 826 votes to Adams' 518.

Full coverage: Get to know the Republicans in Montana's U.S. Senate primary race

Montana votes in primary marked by attacks, outside spending

Montana voters went to the polls Tuesday to pick a challenger to U.S. Sen. Jon Tester after an expensive primary election campaign marked by a…

Second in a two-part series.

The question came handwritten on a note card, given to the moderator of a Missoula forum for the four Republican candidates seeking to run for…

Kathleen Williams had a 1,010-vote lead over John Heenan in a night-owl finish Tuesday in the Democratic primary for U.S. House.

Williams wins a close one and moves on to challenge Gianforte

Kathleen Williams has won the Democratic primary in the race for Montana's U.S. House seat.

Midterm turnout in Montana highest since 1994

While the races for U.S. Senate and U.S. House seats got top billing in Tuesday night's primary election, candidates for the 125 open seats in…

U.S. Senate candidate Russ Fagg talks with supporters during a primary election night party at the Hilands Golf Club in Billings on June 5, 2018.

U.S. Senate candidate Russ Fagg talks with supporters during an election night party at the Hilands Golf Club in Billings on Tuesday.