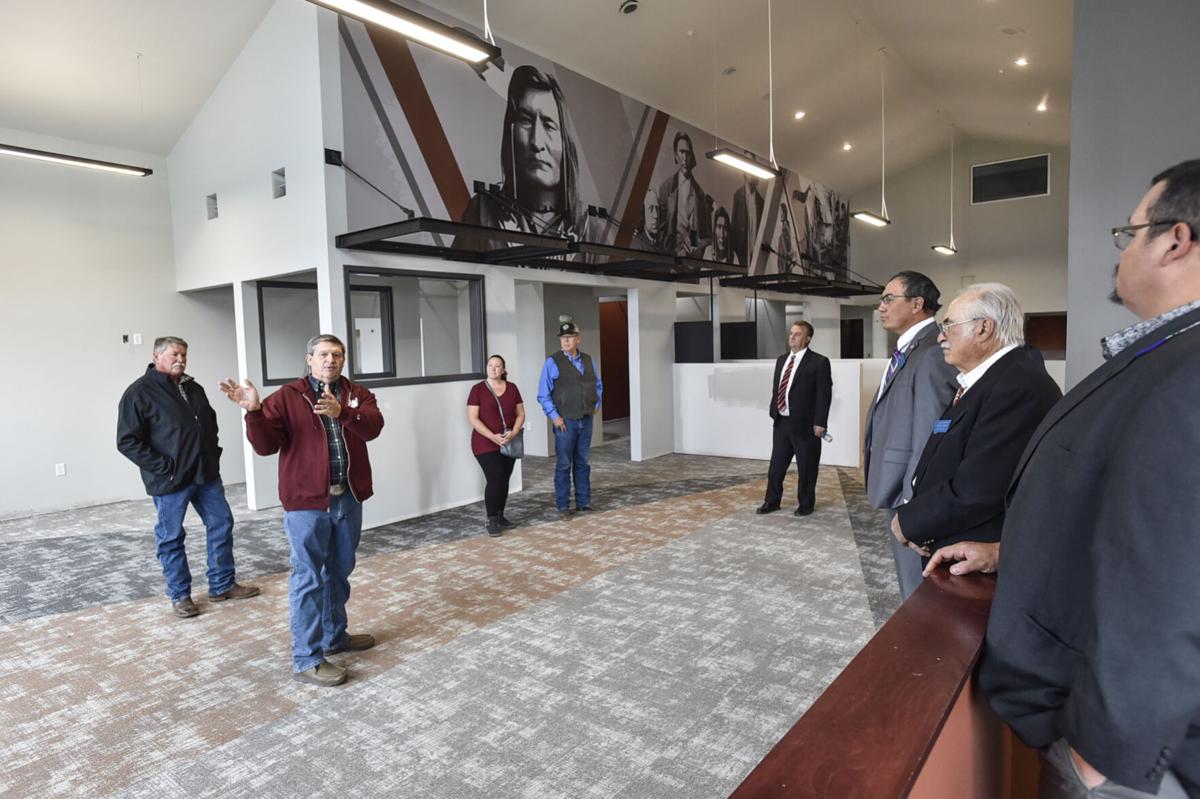 Gerald Gray, chairman of the Little Shell Chippewa Tribe, in maroon, leads a tour of the under-construction Little Shell Tribal Health Clinic for members of the State-Tribal Relations committee on Thursday in Great Falls. 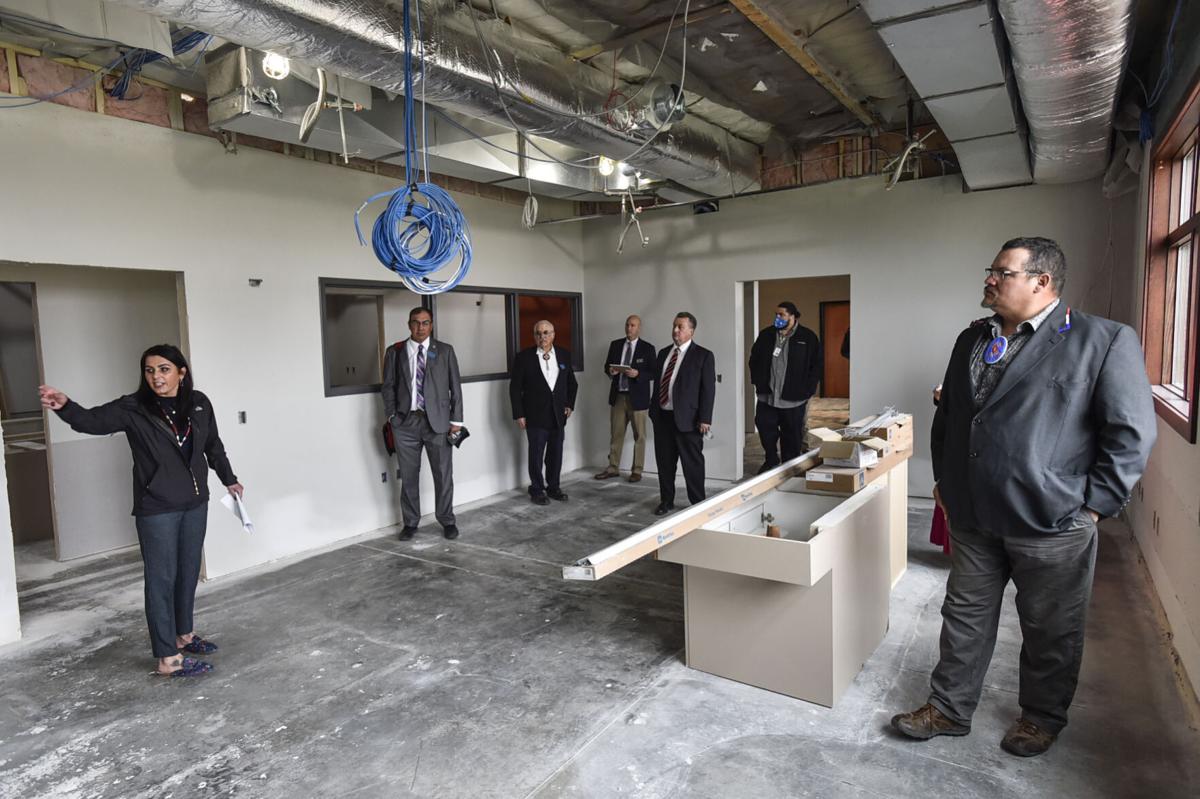 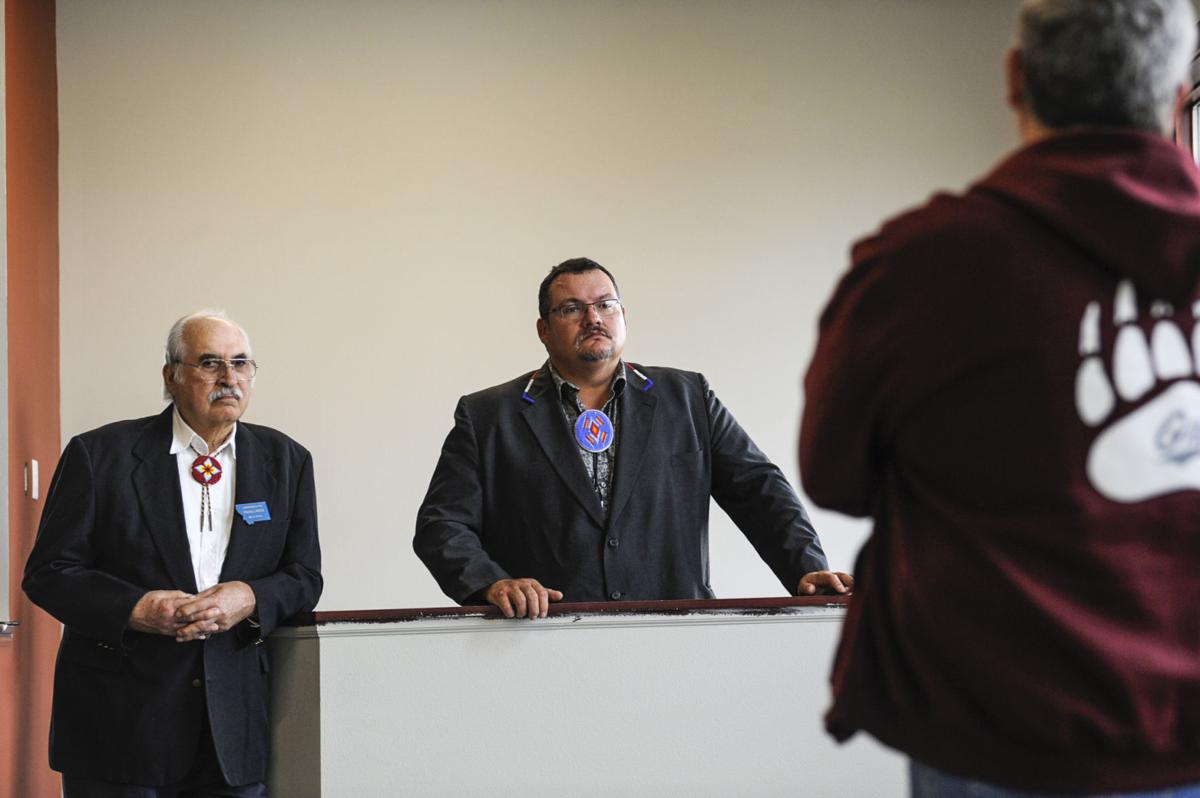 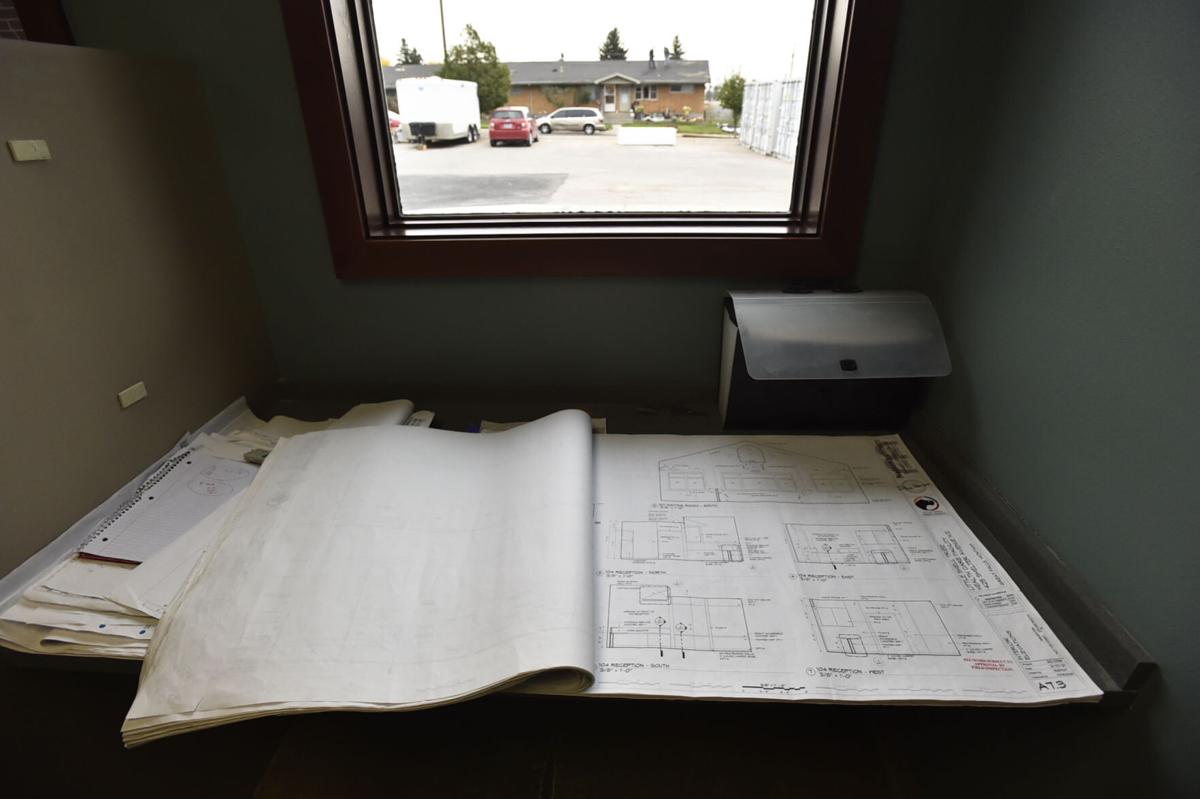 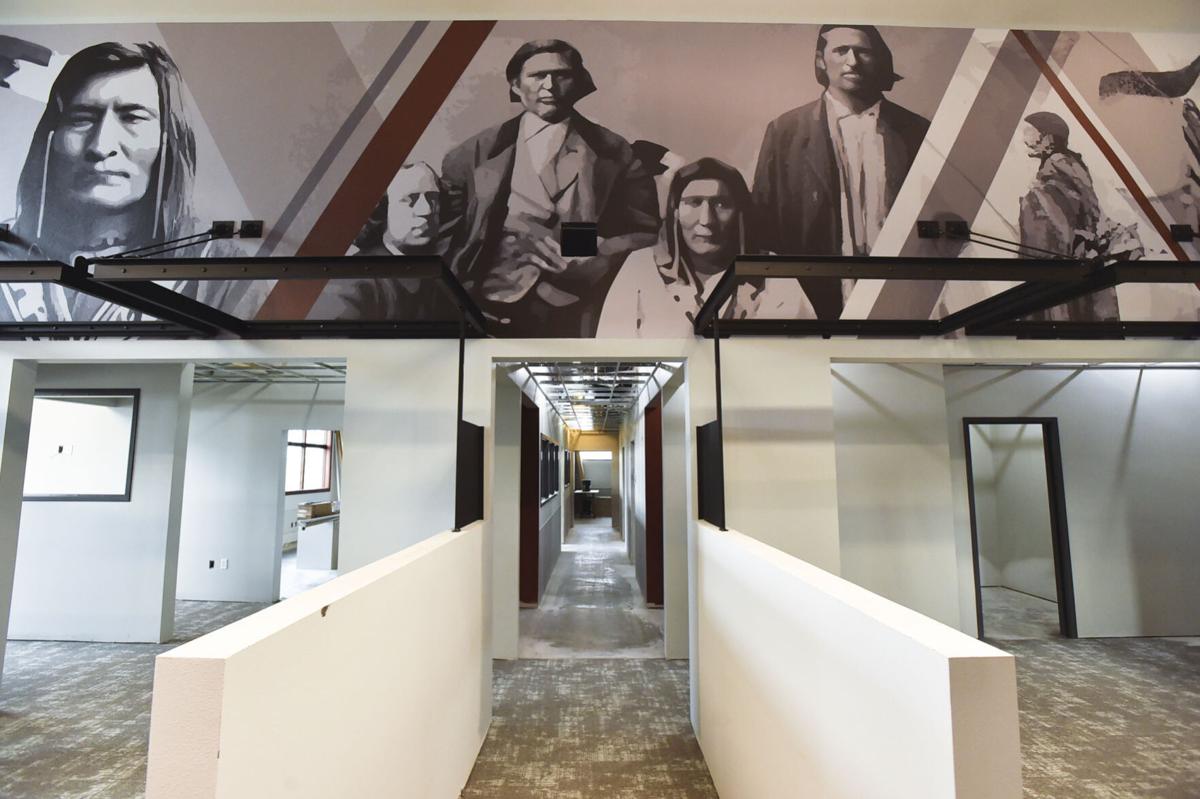 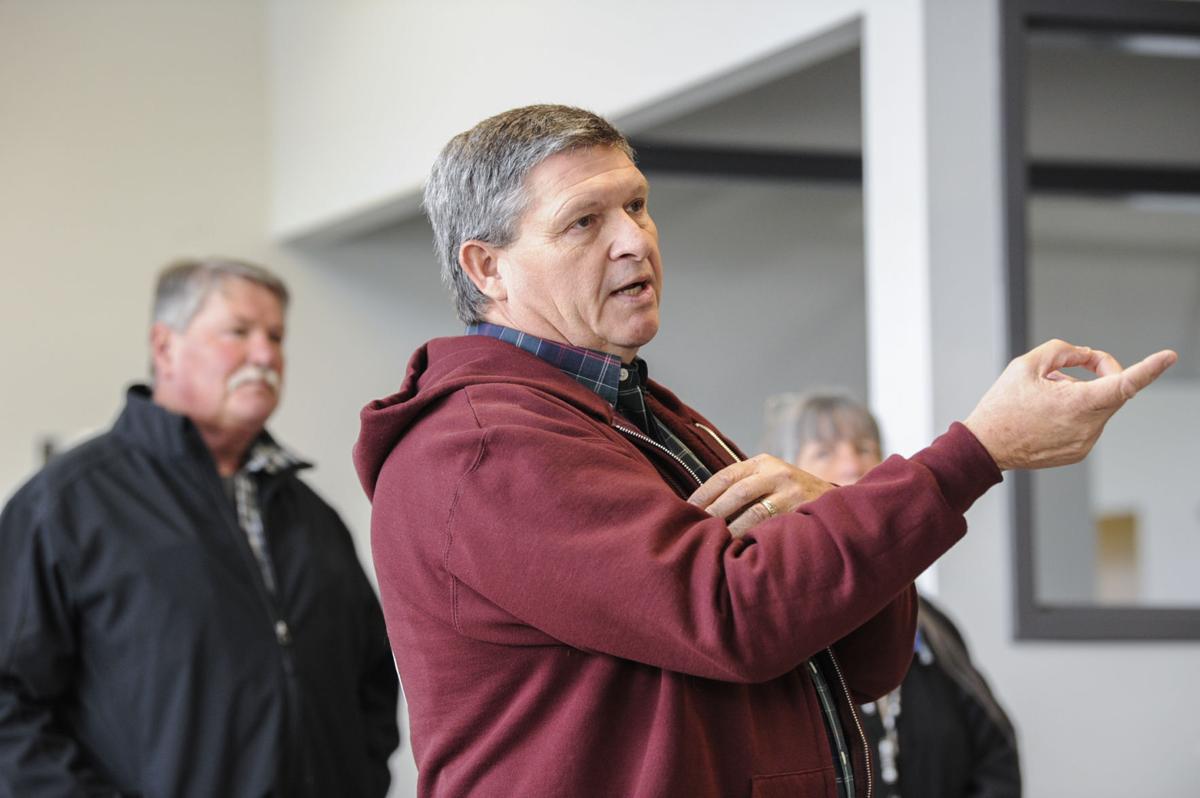 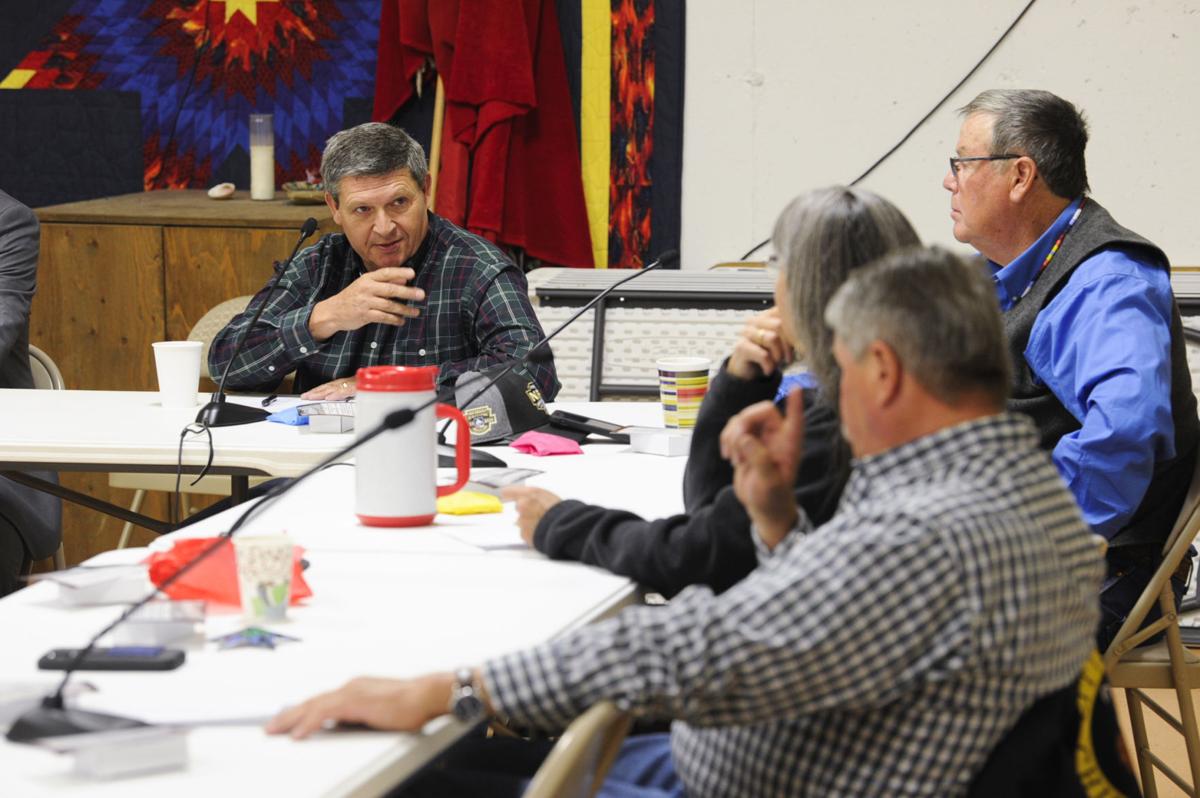 “It has been a long time,” Molly Wendland, the tribe’s health director, said Thursday. “Over 100 years we’ve waited for federal recognition, so ‘exciting’ is not even the word for it. I’m just very proud and very happy for our members.”

Members of the tribal council and health care employees met with members of the Legislature’s State-Tribal Relations Interim Committee for a tour of the facility Thursday morning. A mural of Chief Little Shell III and other figures from the tribe’s history stretched along the wall across from the entrance, looking down on the otherwise bare walls of the facility, a former animal hospital on the northern edge of Great Falls.

The group toured the mostly empty building, which will eventually house examination rooms, a radiology department, a dentist’s office, a vision clinic and a pharmacy with a drive-thru window.

After more than a century of lacking formal recognition from the federal government, the Little Shell Tribe finally achieved that status in December 2019.

The broad range of services is central to the tribe’s vision of providing its members — who lack a reservation and are dispersed across a large swath of Montana and elsewhere — with comprehensive medical care.

“Our members travel a long ways, so when they get here I want them to get everything taken care of,” Wendland said.

That model of care is patterned off the Native-owned Southcentral Foundation based in Anchorage, which tribal leaders said has worked exceptionally well for the constellation of Native American villages throughout Alaska. Little Shell Chairman Gerald Gray described it as a “whole health care” system that encompasses other aspects of patients’ lives, from ensuring stable housing to addressing mental health and dietary needs.

“Doctors aren’t back hiding in their offices; they have to be together with the nurses, and mental health, and even nutritionists,” Gray said.

The clinic’s official opening is slated for Nov. 12. Not all services will be immediately available, but will be phased in over time. For the first three years, Indian Health Services will be in charge of the clinic’s operations. After that, the tribe hopes to take over the IHS-funded contract.

A large percentage of those members live in Cascade County, and Gray believes that having an IHS-funded clinic nearby, along with the comprehensive care the tribe aims to eventually provide, will cut down on costs both to members and emergency rooms, where he said many uninsured tribal members end up receiving care. Currently, most Little Shell members seek care at IHS facilities in Browning on the Blackfeet Reservation, a two-hour drive west from Great Falls, or on the Rocky Boy's Reservation, more than an hour in the other direction.

“For sure, that’ll be a change,” Gray said. “They’ll have a place where they can feel comfortable.”

Recognizing that many of the Little Shell’s members are spread throughout the north-central portion of the state, Gray added that the tribe will offer transportation service to the clinic from along the Hi-Line.

Plans to open earlier this summer were pushed back as the pandemic continued to cause supply shortages of needed medical equipment. And Wendland added that as is the case everywhere else in Montana, a shortage of nurses and other health care specialists has thrown another wrench in IHS’s plans to get staffed up in time.

Still, the November opening is a far cry from initial estimates that it could take as long as 40 years for the funding to be in place for such a comprehensive health clinic. Gray said money the tribe received through one of the federal COVID stimulus bills, known as the CARES Act, provided the bulk of the funding for the roughly $2.5 million facility.

It's the second lawsuit challenging Montana's "vaccine discrimination" law, which is the only such law in the country that applies the prohibition to the private sector.

The two GOP leaders also raised the possibility of a special session to address election issues, requesting an estimate of how much that would cost.

Unsubstantiated election claims made by Republicans at the national level have filtered down to Montana, despite the state GOP's historic success in the 2020 general election.

The state Democratic Party and the candidate committee for U.S. Sen. Jon Tester, D-Mont., along with Macee Patritti, a 19-year-old University of Montana student, filed the complaint Tuesday.

Gerald Gray, chairman of the Little Shell Chippewa Tribe, in maroon, leads a tour of the under-construction Little Shell Tribal Health Clinic for members of the State-Tribal Relations committee on Thursday in Great Falls.