The Republicans who hold the majority in the state Legislature on Monday put forward rules that would create a pathway for a hybrid session, but would explicitly not require mask use or distancing measures. The Democrats sharply objected to the proposals which they said were reactive, not proactive, to managing the novel coronavirus in the upcoming Legislature.

Though many had been looking to Monday and Tuesday's meetings to get a clear picture of how the session will function, Sen. Cary Smith, a Republican from Billings who chaired the joint committee meeting Monday, said lawmakers wouldn't vote on proposals until Dec. 16.

Monday's meeting was a combination of the House and Senate Rules committees, which will meet separately Tuesday. Generally, the two committees develop rules that make changes to procedures, decorum and other details.

But this year the group of lawmakers will determine how 150 legislators, plus the hundreds of members of staff, the public, media, lobbyists and others that normally congregate in the Capitol will go about their work.

The novel coronavirus is spreading nearly unchecked through Montana, with more than half of the total cases in the state coming during the last month. By Monday, nearly 68,600 people statewide have been sickened by the virus and 742 had died.

The Lewis and Clark County health officer, county health board, county commission, Helena city commission and mayors for Helena and East Helena, along with organizations like the Montana Nurses Association, have all asked lawmakers to meet remotely.

Many of those requests came after caucuses last month, when nearly 100 Republicans met in the Capitol unmasked and generally not following distancing precautions. Democrats have relied on a mix of remote participation and mask use while in the building. The same held true Monday, with most Republicans not masked. Democrats in the building wore face coverings and several participated remotely.

On Monday, Cathy Burwell with the Helena Chamber of Commerce asked lawmakers to meet in person, saying Helena's economy relies on the boost it gets when they come to town for 90 days every other year. She encouraged lawmakers to wear masks. Incoming Republican Gov.-elect Greg Gianforte has also said he'll wear a mask in the Capitol and encourages others to do so.

Republican Sen. Jason Ellsworth, who is president pro tempore in the Senate, introduced a proposal Monday that would create a COVID-19 commission made up of legislative leadership.

Under Ellsworth's proposal, the panel would have broad authority over aspects of the legislature's business that are affected by the pandemic. The panel or a legislator's caucus leader would have say over if a lawmaker could participate remotely. It would also be able to set caps on occupancy in the building based on several factors including risk of infection. It did not require the use of face coverings.

Democratic Sen. Jill Cohenour, the minority leader in the Senate from East Helena, said her party felt the proposal set the Legislature up to respond to outbreaks, not prevent them. She said measures like holding the session entirely remotely or delaying it made the most sense. Democrats have made proposals to change the rules to allow for either of those options.

Ellsworth countered that the panel would allow lawmakers to be flexible to respond as situations arise. Other Republicans said an in-person session was the best way to serve their constituents.

The panel would consist of six Republicans and two Democrats, something the minority party objected to.

Rep. Kim Abbott, the Democratic minority leader in the House from Helena, said an amendment brought by Sen. Pat Flowers, D-Belgrade, that would require the use of face coverings, and require distancing, daily temperature checks and sanitation protocols was the "absolute minimum" lawmakers should do.

During the nearly three-and-a-half-hour meeting, which will continue Tuesday, legislators at times had intense clashes.

State Rep. Derek Skees, who chairs the House Rules committee and is a Republican from Kalispell, said if employees branded as essential have gone to work through the pandemic, lawmakers should too.

Skees also forwarded the idea of reaching herd immunity, which is the idea that a population is protected from a virus if, without a widespread vaccine, enough people become sick and recover. The World Health Organization says "letting COVID-19 spread through populations, of any age or health status, will lead to unnecessary infections, suffering and death."

"In my mind this cannot be an entirely virtual session," Skees said. "COVID is on the route to gaining 70% of our population, which is what happens to a virus when it gains herd immunity." He added that between that and a vaccine, the novel coronavirus would soon be a "problem of the past."

Nearly 6.5% of the state's population has tested positive for the virus. The first 9,750 doses of the vaccine are set to arrive in Montana as early as next week and will go to health care workers, once approved for emergency use.

Cohenour said the idea of moving toward herd immunity was dangerous.

"Herd immunity is not a strategy because people will die to get us to herd immunity," Cohenour said.

State Rep. Sharon Stewart-Peregoy, a Democrat from Crow Agency, lives in Big Horn County, which has been hit hard by the virus. This week, the county counted its 50th COVID-19 related death.

Stewart-Peregoy is Native, as are many in her district. Native Americans have been disproportionately harmed by the virus. They make up about 7% of the state's population but represent 15% of cases and 27% of deaths.

“This is normal: people wearing a face mask, having one point of entry, having the temperatures checked,” she said. “ … Ultimately it’s about the safety of our constituents. It’s about the people we serve. I tell you right now I have no stomach to talk about this in the abstract. My community has been hit hard. Lewis and Clark County is a hot spot. ... If you have not seen or personally seen a family member who cannot talk to a loved one who is fighting for their life in the ICU, then please don't talk about this abstractly."

State Rep. Barry Usher, a Republican from Billings, rose after Stewart-Peregoy and called her comments "emotional" and "insulting." Yellowstone County is also among the counties most harmed by the pandemic.

"We have kotowed to you all to give you the opportunity to be remote and be safe if you feel you need to be, and you're going to argue about these amendments? It's ridiculous. It's a waste of my afternoon. I could be trying to make my business survive through this. Instead I'm going to be up here listening to you guys cry," Usher said.

Usher also cited a falsehood about mask use, saying masks could cause harm to the wearer.

"Think about it. My body has its own mask system. I exhale what my body doesn't want. When you have a mask on, it holds it in. It holds it in, so you can re-bring that negative that your body just put out," Usher said.

The Associated Press earlier this year quoted Sarah Stanley, associate professor of infectious diseases and vaccinology at the University of California, Berkeley School of Public Health, as saying there's no evidence something like what Usher described is true. She also told the AP doctors wear masks for long stretches without ill effects and that mask use among medical workers and others was normal before the pandemic and widespread harm has not been observed.

Usher also said a recent report from Johns Hopkins showed 2019 and 2020 had "same death rate in the U.S., the only difference is what people were classified dying from."

This claim has proliferated on right-wing social media. However, it refers to a story that ran in a student publication called the Johns Hopkins News-Letter and is based on a YouTube video from someone in the applied economics department.

From late January-Oct. 3, the Centers for Disease Control and Prevention estimates 299,028 excess death this year, with 198,081 attributed to COVID-19.

Montana's major hospitals expected to get COVID-19 vaccine next week

Ten hospitals in Montana will get the first round of Pfizer's COVID-19 vaccine when it's delivered, possibly next week, Gov. Steve Bullock said Monday.

Some members of the Montana Board of Public Education have asked incoming Republican Gov.-elect Greg Gianforte to clarify their terms do not e…

The state health department said Friday that because of delays caused by the pandemic, the federal government still hasn't approved the additi…

Montana reported another 859 COVID-19 cases and the COVID-19 deaths of 21 more people in an update Tuesday morning to the state's case mapping and information website.

House changes rules on killing bills to give chairs more power, speaker too

On Monday, the prognosis for Billings Clinic registered nurse Ellen Edlund was not good. She is battling COVID-19 in the hospital’s Intensive Care Unit, hooked to a ventilator and an ECMO, a device that oxygenates blood.

Montana is one of the 17 states joining an amicus brief before the U.S. Supreme Court asking that it delay the Electoral College votes of four…

Montana reported 779 COVID-19 cases and 10 deaths in an update Thursday morning to the state's case mapping and information website.

With the first doses of a vaccine likely to be administered in Montana next week, and optimistic signs that the spread of the novel coronaviru…

Republican U.S. Rep. Greg Gianforte, who will be sworn in as Montana's 25th governor in January, joined more than 100 of his congressional col…

Helena senator to seek study on nuclear power in Montana 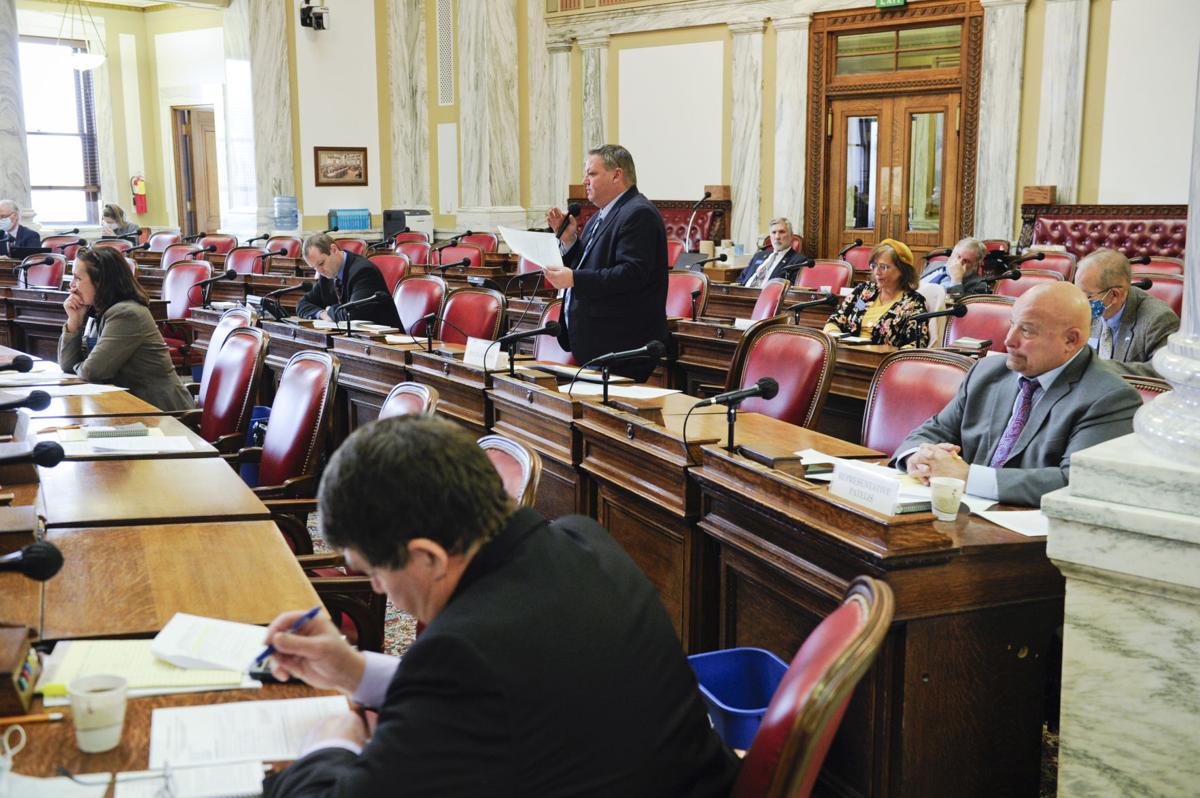 Sen. Jason Ellsworth, R-Hamilton, speaks during a meeting of the Joint Rules Committee on Monday, Dec. 7, 2020, on the House floor of the Montana State Capitol. 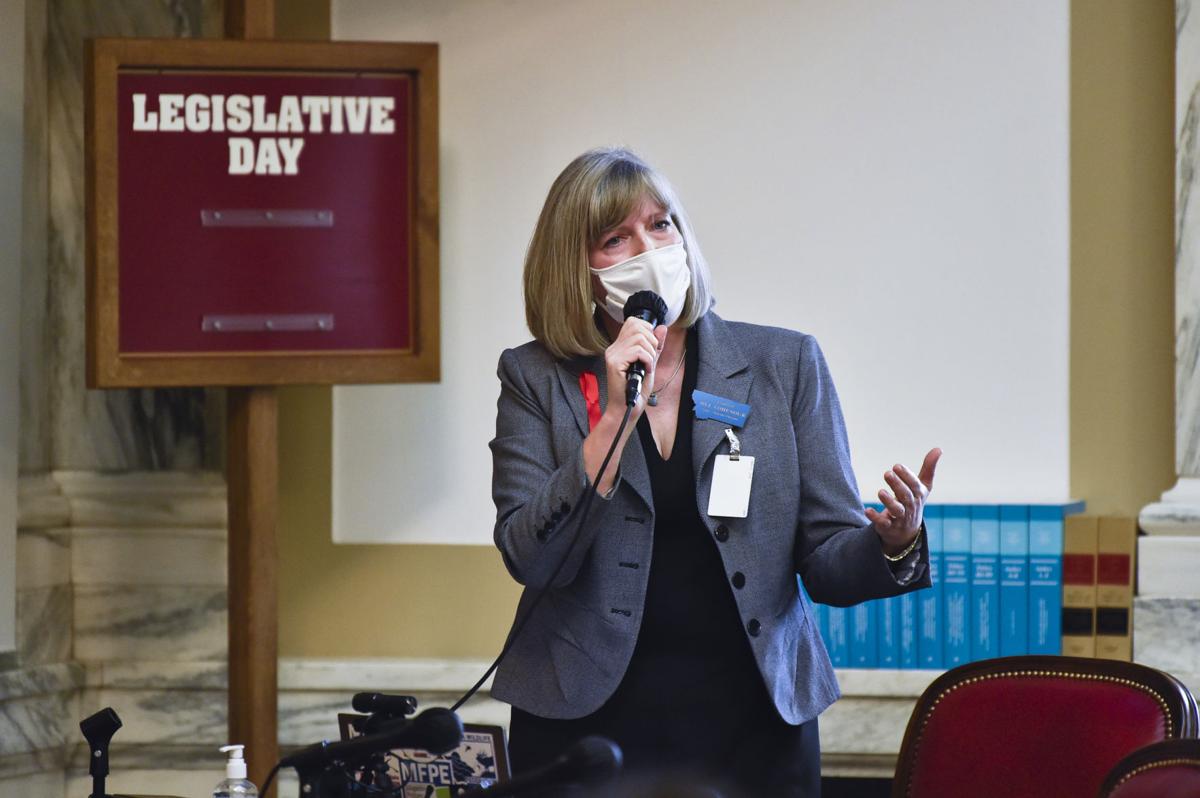 Sen. Jill Cohenour, D-East Helena, speaks during a meeting of the Joint Rules Committee on Dec. 7 on the House floor of the Montana state Capitol. 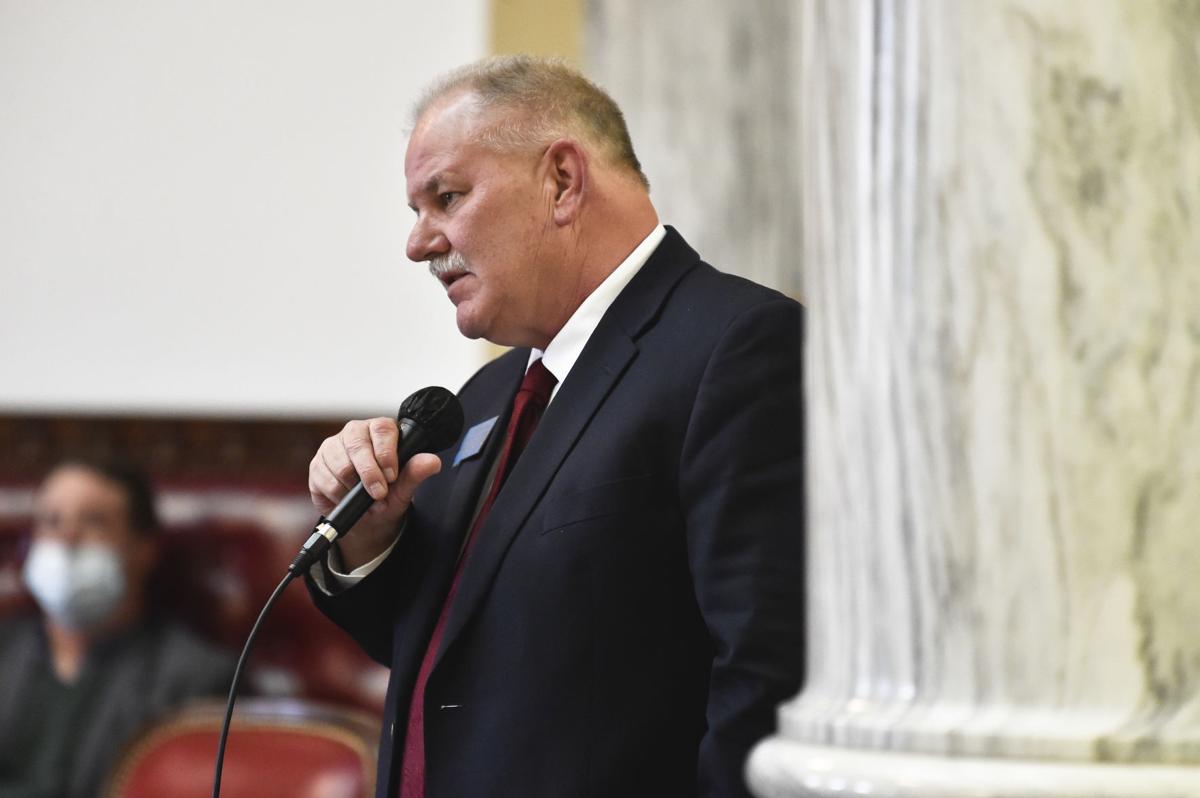 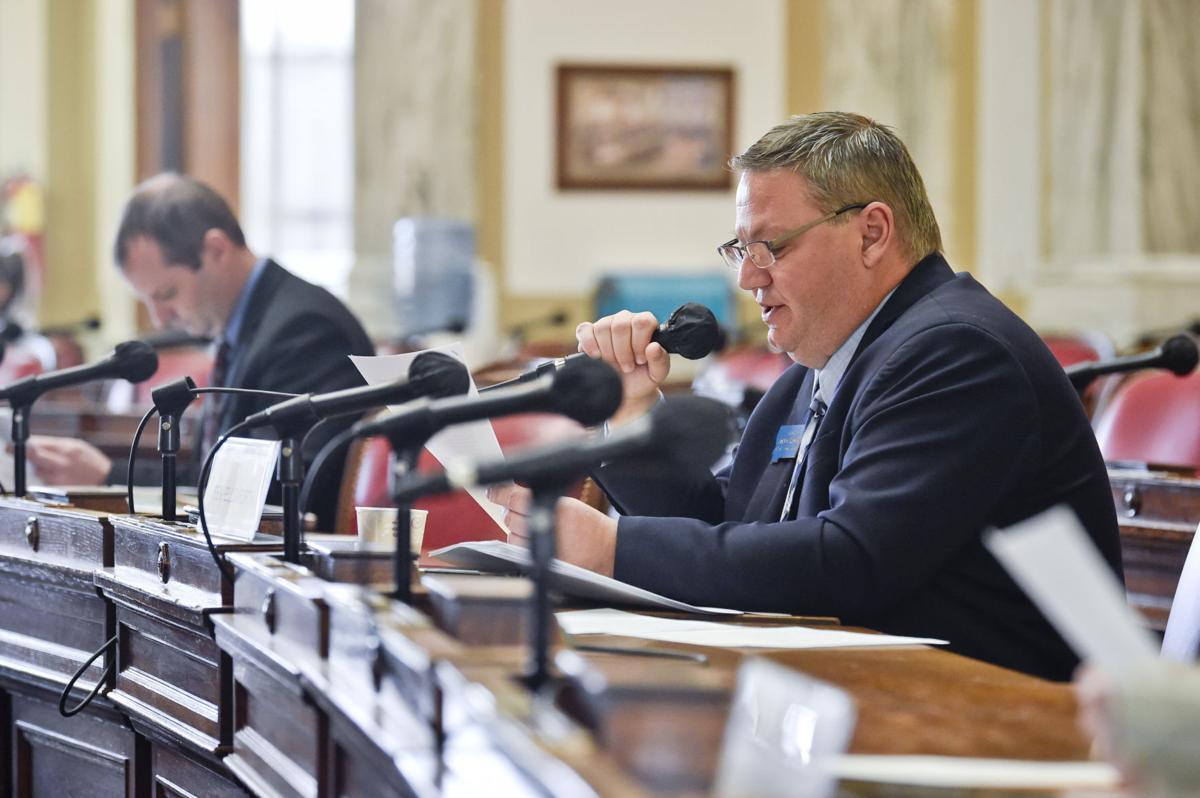 Sen. Jason Ellsworth, R-Hamilton, speaks during a meeting of the Joint Rules Committee on Dec. 7 on the House floor of the Montana State Capitol. 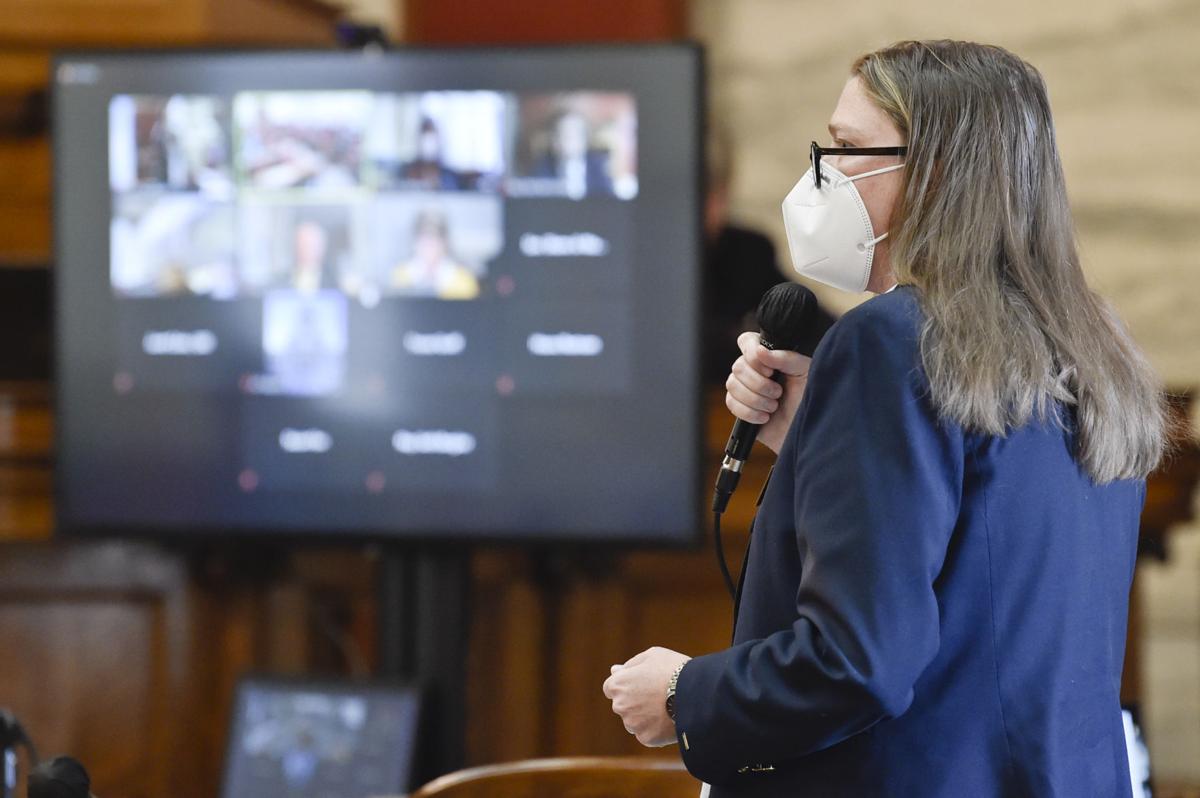 House Minority Leader, Rep. Kim Abbott, D-Helena, speaks during a meeting of the Joint Rules Committee on Dec. 7 on the House floor of the Montana state Capitol.