WildEarth Guardians and Project Coyote, a project of Earth Island Institute, filed the lawsuit in Lewis and Clark County District Court against Montana Fish, Wildlife & Parks and the Montana Fish and Wildlife Commission. The groups make several allegations in their lawsuit including that the state has failed to timely review its wolf management plan, meaning subsequent regulations based on the plan fall short of state law. The lawsuit further alleges that the state has not used scientifically defensible methods in estimating wolf populations. Finally, the lawsuit claims that killing wolves that venture outside national parks disrupts management of park wolves, causing a conflict with federal law. 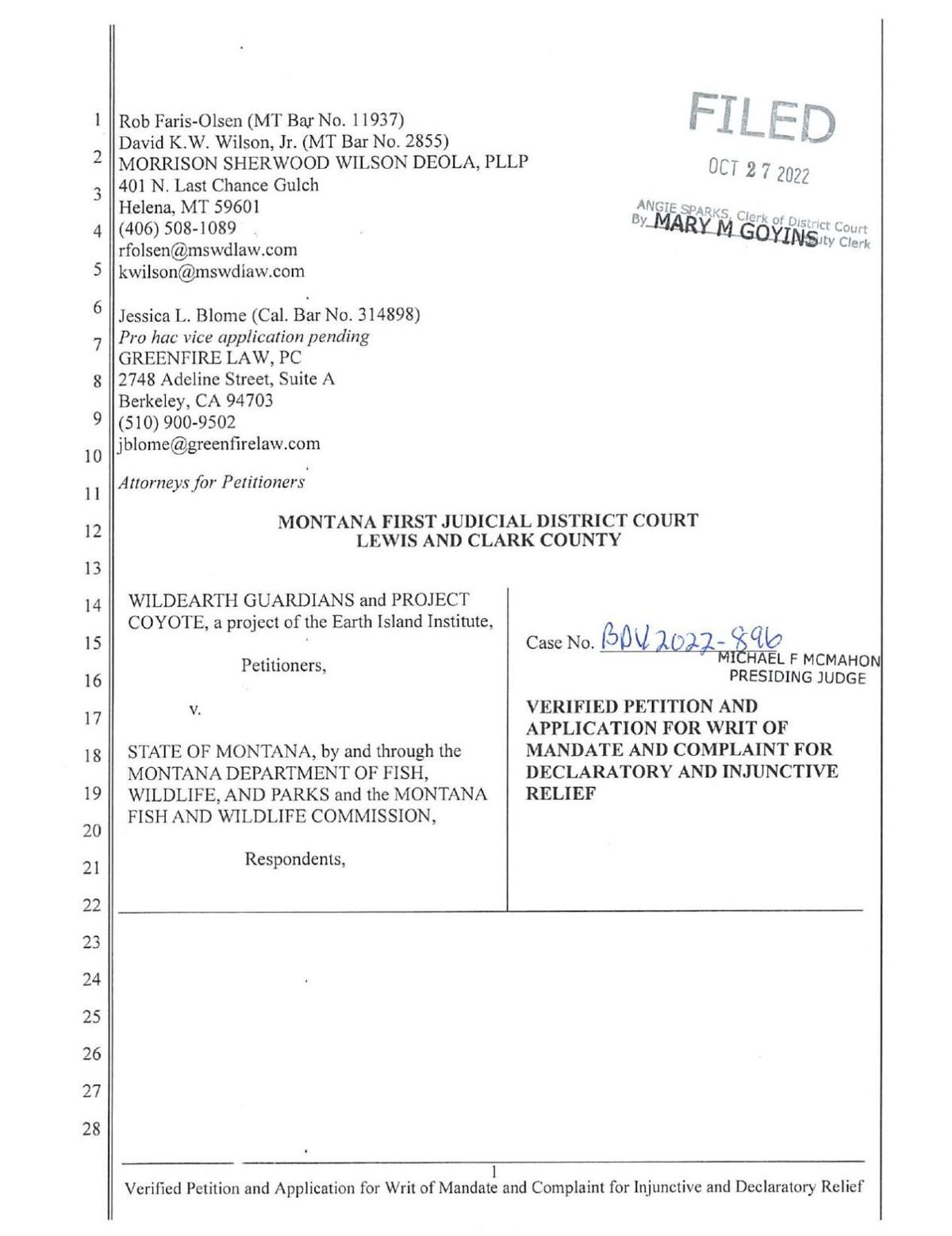 Montana’s wolf hunting and trapping seasons have come under more scrutiny the last two years following new laws and regulations aimed at reducing the state’s wolf population. Those include allowance of snares in some areas, increased bag limits, hunting at night on private land and elimination of quotas near Yellowstone and Glacier national parks; a six-wolf quota was reinstated this season near Yellowstone.

Thursday’s lawsuit is the third in state court directed at the process around drafting Montana’s wolf regulations, although the first to raise legal arguments around the management plan and federal law. Additional litigation is also ongoing in federal court with wildlife groups attempting to push a return to Endangered Species Act designation.

Lizzy Pennock, the Montana-based carnivore coexistence advocate at WildEarth Guardians, said polices enacted in Montana were not based in sound wildlife management.

“Trophy hunting for wolves does not put food on anyone’s table, make elk populations healthier, or protect livestock,” she said. “Montana’s pile of wolf carcasses stacks higher every day, and we are done waiting for somebody else to act.”

A spokesperson for FWP said Thursday the agency had not yet been served with the lawsuit and typically does not comment on litigation.

The lawsuit itself largely challenges the procedures state wildlife managers took in enacting regulations, quotas and population estimates. Montana drafted a wolf management plan in 2002 in anticipation of the animals’ delisting from the federal Endangered Species Act. The groups point to language in the plan that states it should be reviewed every five years. 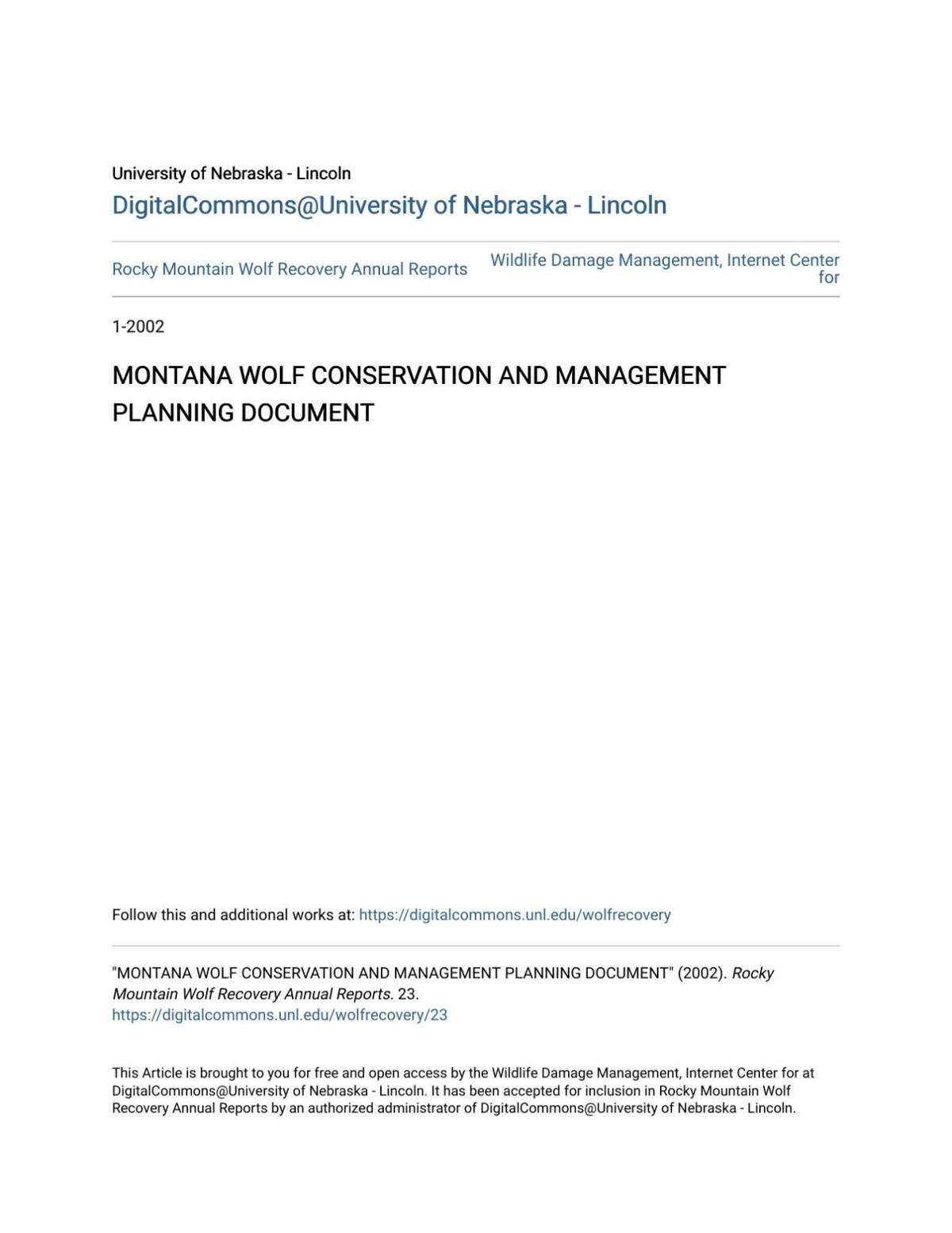 “Despite the requirement that the 2002 wolf plan be reviewed every five years, respondents have never updated it or engaged in a formal review, even though the science of wolf conservation and carnivore ecology has developed significantly since 2002,” the lawsuit states.

The failure to review means that quotas adopted under the “stale” 2002 plan are invalid, the lawsuit alleges, while also making the same argument about FWP’s change from physically counting wolves to population modeling.

The lawsuit challenges the use of “patch occupancy modeling” by the state to estimate wolf populations as an illegal amendment to the 2002 plan. It is not one of the listed methods in the wolf plan, which includes techniques such as track surveys and DNA gathering.

The plan does refer to “noninvasive methods” and lists examples, but does not explicitly identify patch occupancy modeling, or iPOM.

“Respondents cannot make scientifically sound predictions about the impact of wolf hunting and trapping on the sustainability of wolf populations without accurate population data, at a minimum,” the lawsuit states.

Montana’s model for estimating wolf populations itself has come under criticism from wolf advocacy groups who believe it to be flawed and inaccurate, in part pointing to an assessment authored by Montana State University Professor Scott Creel, who wrote that the model is prone to compounding errors and uses “oblique” data. “I am aware of no examples other than the Montana iPOM suggesting that population size can be estimated reliably in the absence of direct demographic data and/or population counts,” he wrote.

A major criticism levied against Montana’s model has been the use of wolf observations by deer and elk hunters as one of the inputs, with critics asserting that hunters could produce biased results. Wolf advocates have pushed for different surveying methods such as physical counts from airplanes, track surveys or howling surveys done by trained biologists or technicians.

The level of scientific scrutiny of Montana’s use of patch occupancy modeling has also been raised by opponents of wolf hunting and trapping. Each input had independently gone through the rigor of the peer review process, but the integration of those inputs had not been peer reviewed and published during recent wolf seasons. In August, FWP announced that its integrated patch occupancy model had made it through peer review for publication.

FWP has defended patch occupancy modeling as a cost-effective and accepted method, noting that as wolf populations in Montana grew, it impaired the ability to accurately count them from the air.

Chris Morgan, vice president west of the Montana Trappers Association, pointed out that patch occupancy modeling has been used in biology for a variety of species and includes layers that account for variability or biases. The estimated 3,300 wolves in the Northern Rockies is far above recovery goals, he says.

“In my point of view, these people … try to manipulate science a lot,” he said. “Science is never static so to speak, but patch occupancy modeling has been around forever. We’ve been using it here to some extent for the last five years, so why now is it so imperative to say it’s so incorrect?

“We believe the science is sound for the management of the species.”

Most recently the model estimated 1,141 wolves in Montana — a number that is in line with recent years. Hunters and trappers killed the fewest number of wolves last hunting season despite increased methods of take. This year’s quota for wolves is 456, although hunters and trappers have never come close to that number in past seasons.

The lawsuit further alleges that laws passed in 2021 by the legislature and subsequent regulations that direct reduction in Montana’s wolf population violate a legal principle called the “public trust doctrine,” which in this case dictates that the state manages wildlife for the benefit of the public. The groups argue that the polices ignore science and professional judgement which jeopardizes wolf populations for future generations.

Finally, the lawsuit claims Montana’s wolf policies run into conflict with federal law and policy, including management of wolves by the National Park Service and other federal agencies. Federal law that may preserve wolves preempts state law that may allow them to be hunted or trapped, the lawsuit alleges.

The groups ask the court to direct FWP to review and update the wolf management plan including any amendments through a formal public process, and to temporarily halt wolf hunting and trapping while the review takes place. The further ask the court to declare the recent wolf laws and regulations unconstitutional under the public trust doctrine.

Members of the public were limited to one minute each, as nearly 100 commenters spent more than two hours advocating their stance on wolves.

Montana’s fishing industry is an economic juggernaut, now accounting for one in five tourism dollars spent in the state and an estimated at $750 million annually.

The bear was shot by the hunter and later killed by authorities.

FWP enforcement chief to retire after being placed on leave

Dave Loewen, who was placed on administrative leave from FWP in July, will retire on Nov. 22.

A judge stopped short of agreeing with two environmental groups seeking a complete halt to hunting and trapping wolves in Montana.