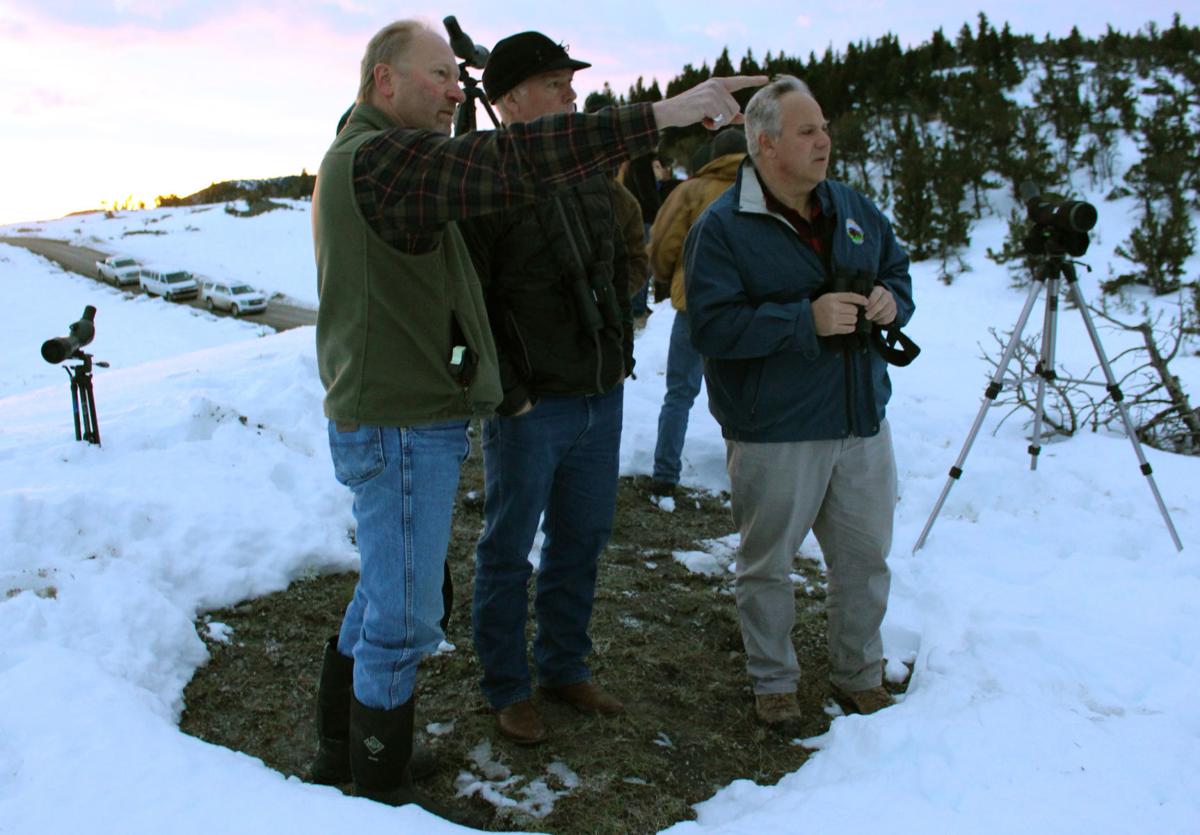 At left, Tony Schoonen, chief of staff at the Boone and Crockett Club, shows U.S. Rep. Greg Gianforte, center, and Secretary of the Interior David Bernhardt where grizzlies have been seen on the Rasmuson Wildlife Conservation Center. 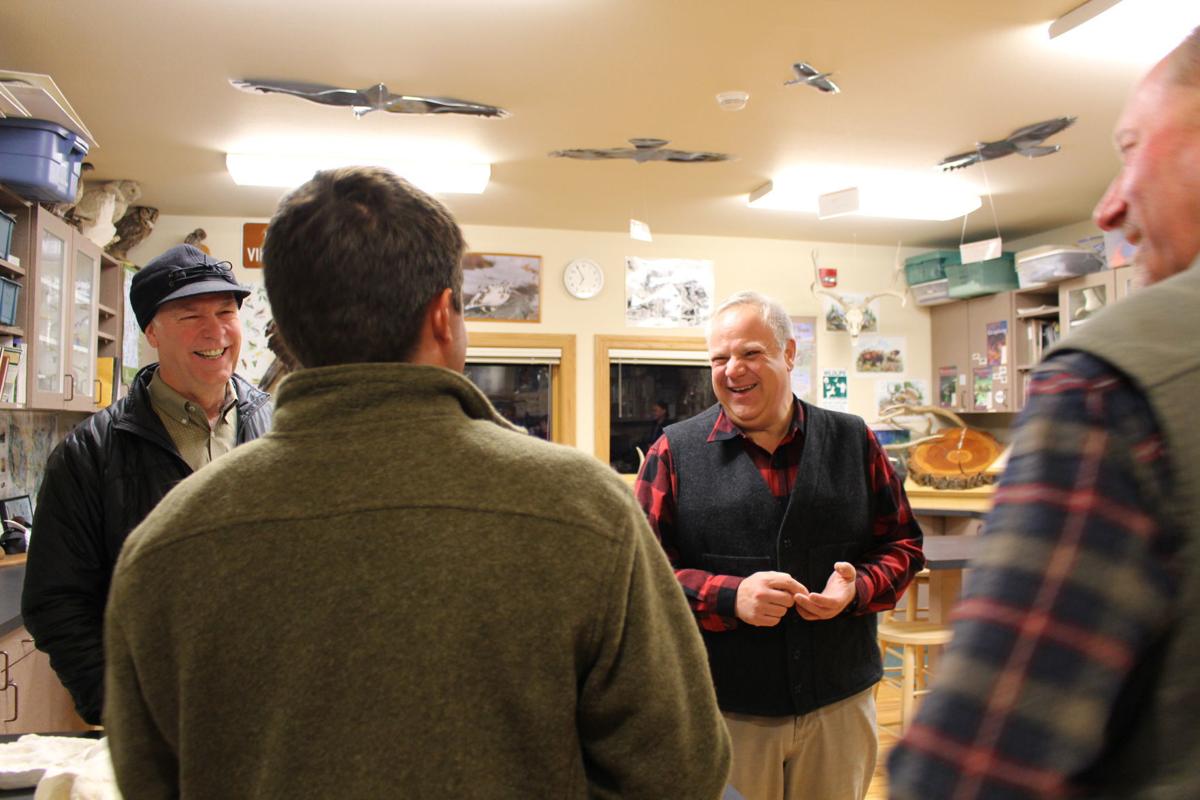 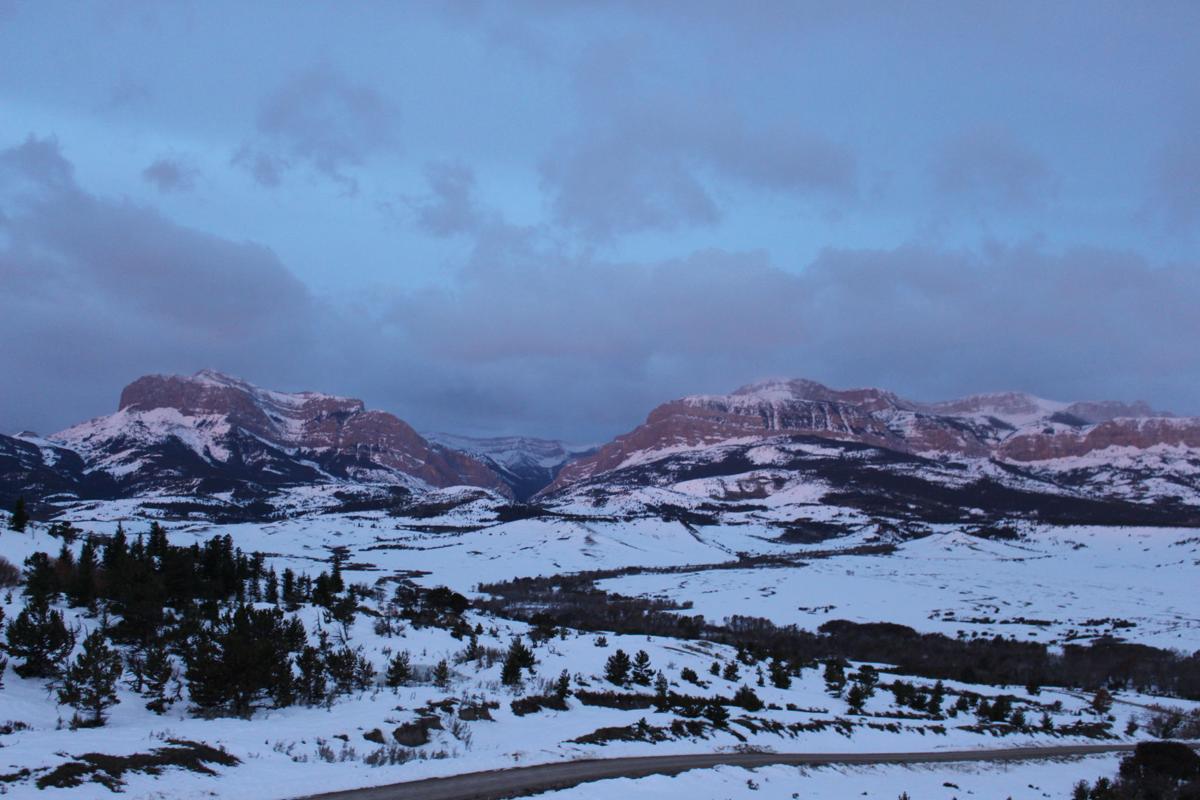 Grizzly bears have made a return to the Rocky Mountain Front after being put on the Endangered Species List, but those who live in the area say problem bears have killed livestock and threatened public safety. 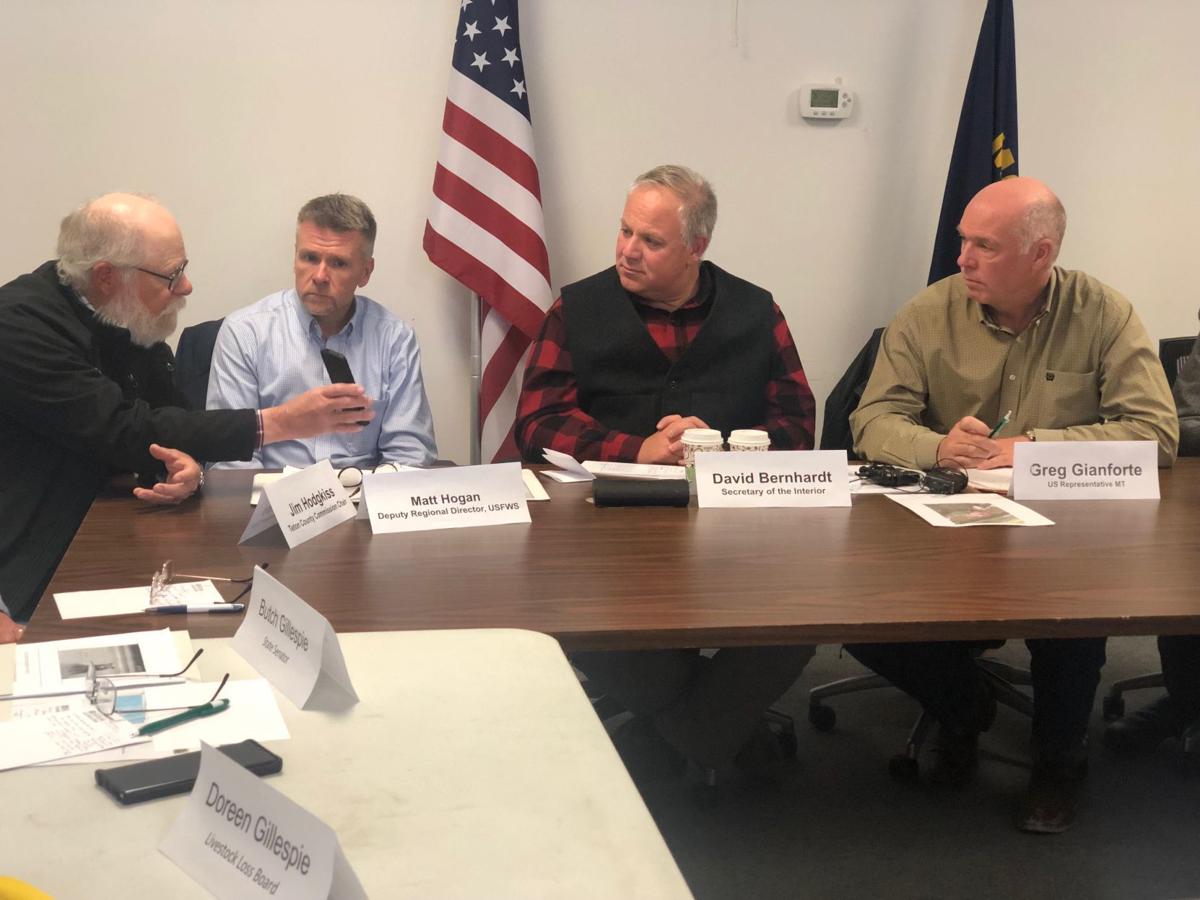 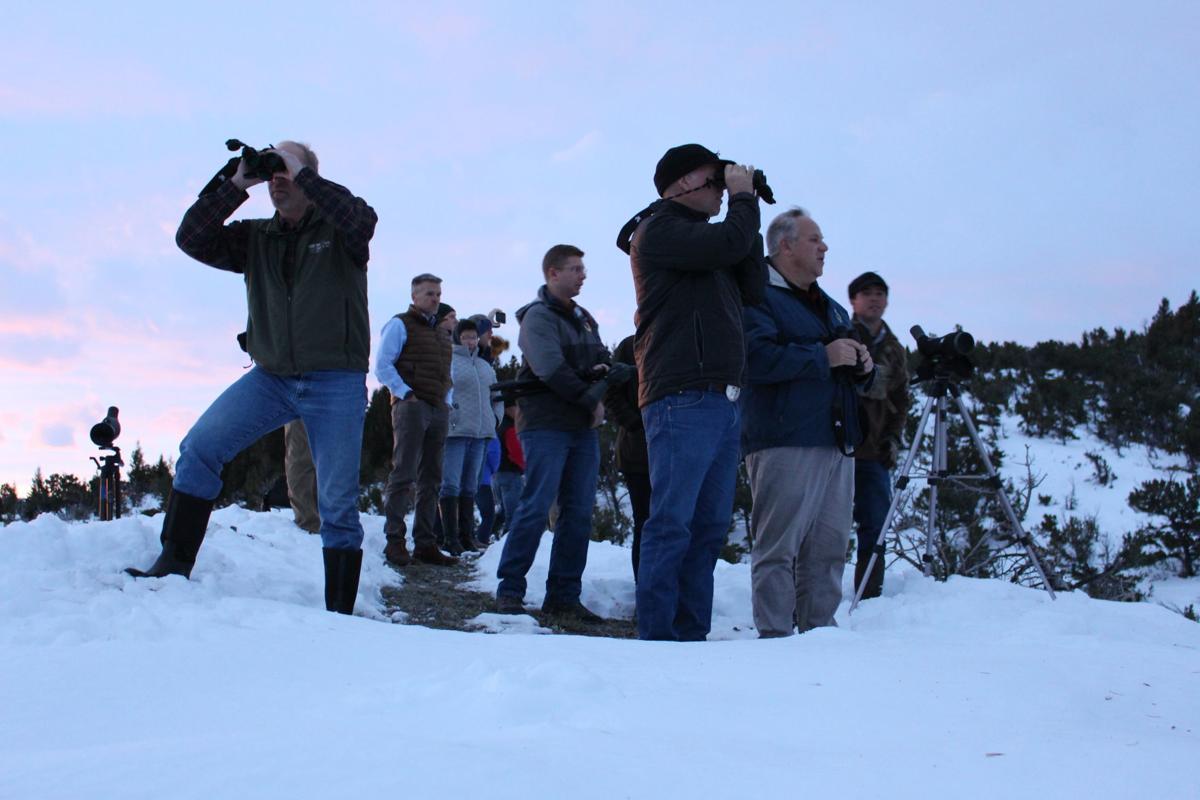 CHOTEAU — After canceling a previously scheduled trip here, Secretary of the Interior David Bernhardt came to this small town along the Rocky Mountain Front on Saturday to hear locals vent about "problem bears" and ask for better management of the species while it remains protected under the Endangered Species Act.

The farmers, ranchers, local residents and elected officials who gathered at a roundtable with Bernhardt and Republican U.S. Rep. Greg Gianforte all supported removing grizzly bears from protected status under the Endangered Species Act, saying the species' population has recovered within the Northern Continental Divide Ecosystem. And while they said they like seeing bears return to the landscape, they wanted a way to address animals that threaten public safety and cause financial losses through livestock depredation and eaten grain. They asked Bernhardt and Gianforte for more state and federal resources.

"We believe the bear has a place in the landscape," said Tony Schoonen, chief of staff at the Boone and Crockett Club. "The problem is we have problem bears."

Grizzly bears are listed as "threatened" under the federal Endangered Species Act. In Montana they are managed through a complex network that involves federal agencies, the state Fish, Wildlife & Parks department and tribal governments.

An attempt to delist grizzlies in the ecosystem surrounding Yellowstone National Park has been held up in court. The U.S. Fish and Wildlife Service has indicated it would move to delist the population near Choteau, in the Northern Continental Divide Ecosystem that comprises Glacier National Park, the Bob Marshall Wilderness Complex and nearby areas.

"Clearly the grizzly bear was endangered, the population was reduced," Gianforte said. "They came under the Endangered Species Act and they have recovered. We should be celebrating and taking a victory lap and transferring management back to the state."

Grizzlies were first added to the endangered species list in 1975, after hunting led to a significant decrease in their population. Over the last few decades, they have rebounded, but whether they have fully recovered to the point of delisting remains a contentious issue. Numbers have steadily risen and bears have increasingly traveled from their traditional strongholds in recent years, but core populations in the lower 48 remain largely isolated from each other. Those opposed to delisting often cite the need for more connectivity between Yellowstone and the Northern Continental Divide, and the absence of bears in places such as the Bitterroot, as evidence that federal protections are still needed.

While everyone at the roundtable agreed that problem bears are, well, a problem, livestock producers said there have been issues with what puts a bear in that category.

For about 10 years, Mike Briggs has managed livestock on the Rasmuson Wildlife Conservation Center west of Dupuyer along the Rocky Mountain Front. Gianforte and Bernhardt toured the ranch Saturday at sunrise.

When cattle are found dead, Briggs said the state or federal agency that investigates can have a difficult time determining what killed the animal. That can be for a number of reasons, from the carcass degrading because of weather conditions to the variety of predators that might make it a meal after it's dead. If it is determined to be a grizzly depredation ranchers may apply for reimbursement through the Montana Livestock Loss Board.

"It's really hard," Briggs said. "There's not a lot we can do. It's not like we can move our cows away from problem bears."

John Steuber, the Montana director of USDA Wildlife Services, said investigating a potential bear kill is not as simple of a process as people might think. It involves site visits and a necropsy. Identifying a grizzly as the culprit can be difficult with so many possible other predators.

"When we get a call of depredation … we don't know that that's what it is," Steuber said. "Livestock die of other causes, we all know that. It might die of pneumonia or scours or something else. Or it might have died from another predator and then the grizzly bear took it over. That's what our job is, to make that determination."

If a bear is determined to be a problem either as a threat to human safety or preying on livestock, wildlife managers have a variety of tools at their disposal. Those can range from nonlethal means such as electric fencing to trapping and relocating to euthanasia.

After the roundtable, Bernhardt said he "got the message loud and clear" and vowed to get clarity around what qualifies as a problem grizzly.

"I am interested in making sure that the department, USDA and the state, have a very good understanding of what a problem bear is and consensus. I think that is a very fair thing for you folks to ask, irrespective of the status (on the Endangered Species list)," Bernhardt said. " … There are clearly problem bears. How we define what a problem bear is might be different for different people."

Gianforte said there are a number of things Congress needs to do, including reforming the Endangered Species Act. In September he unveiled a bill that would make desisting species protected under the Act less difficult.

"We need to act," Gianforte said, asking Bernhardt to "do everything in your power" to delist the bear and bring management to the state.

Fish, Wildlife and Parks Director Martha Williams attended Saturday's meeting. She said she'd like to see grizzlies delisted as soon as possible, but in the meantime the state is trying to manage them as best they can. Montana Gov. Steve Bullock, a Democrat, formed a Grizzly Bear Advisory Council that held its first meeting last week.

Williams said that group, a few of whose members also attended the roundtable Saturday, is looking at "collaborative ideas" to find solutions to grizzly bear conflicts while the bears remain listed.

"I'm more hopeful for that than bigwigs from D.C. coming in, but I'm happy that everyone's listening," Williams said.

FWP has a collective management plan for the Northern Continental Divide Ecosystem, involving state and federal land management agencies, in preparation of a possible delisting.

"I'd like to see bears delisted tomorrow, frankly," Williams said. "I think we have already set in place plans and everything to demonstrate that state will manage bears responsibly."

Chuck Roady, vice president and general manager of F.H. Stoltze Land & Lumber in Columbia Falls and a member of the advisory council, said without delisting there's only so much that can be done. Roady said he's worried about possible bear attacks on his forested property he lets the public access.

"The state does a really good job but there's a lot of limitations as long as it's listed," Roady said.

Doreen Gillespie, with the Livestock Loss Board, said she was sad Saturday's meeting needed to be held at all and that boards like hers exist ,and wants to see grizzlies delisted. She also said she's frustrated with having to accommodate bears by not being able to leave out food for her working dogs or by fencing in grain bins.

"We are told we need to change what we've done our entire life," Gillespie said.

At left, Tony Schoonen, chief of staff at the Boone and Crockett Club, shows U.S. Rep. Greg Gianforte, center, and Secretary of the Interior David Bernhardt where grizzlies have been seen on the Rasmuson Wildlife Conservation Center.

Grizzly bears have made a return to the Rocky Mountain Front after being put on the Endangered Species List, but those who live in the area say problem bears have killed livestock and threatened public safety.