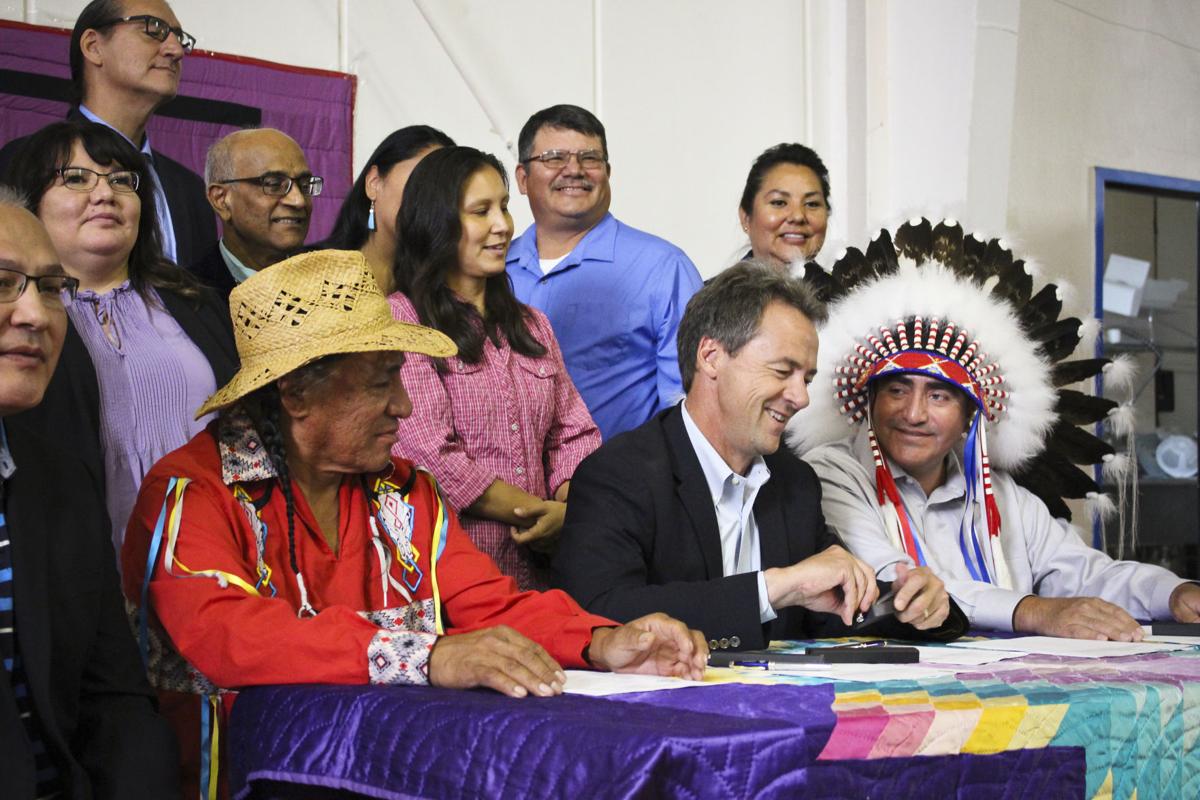 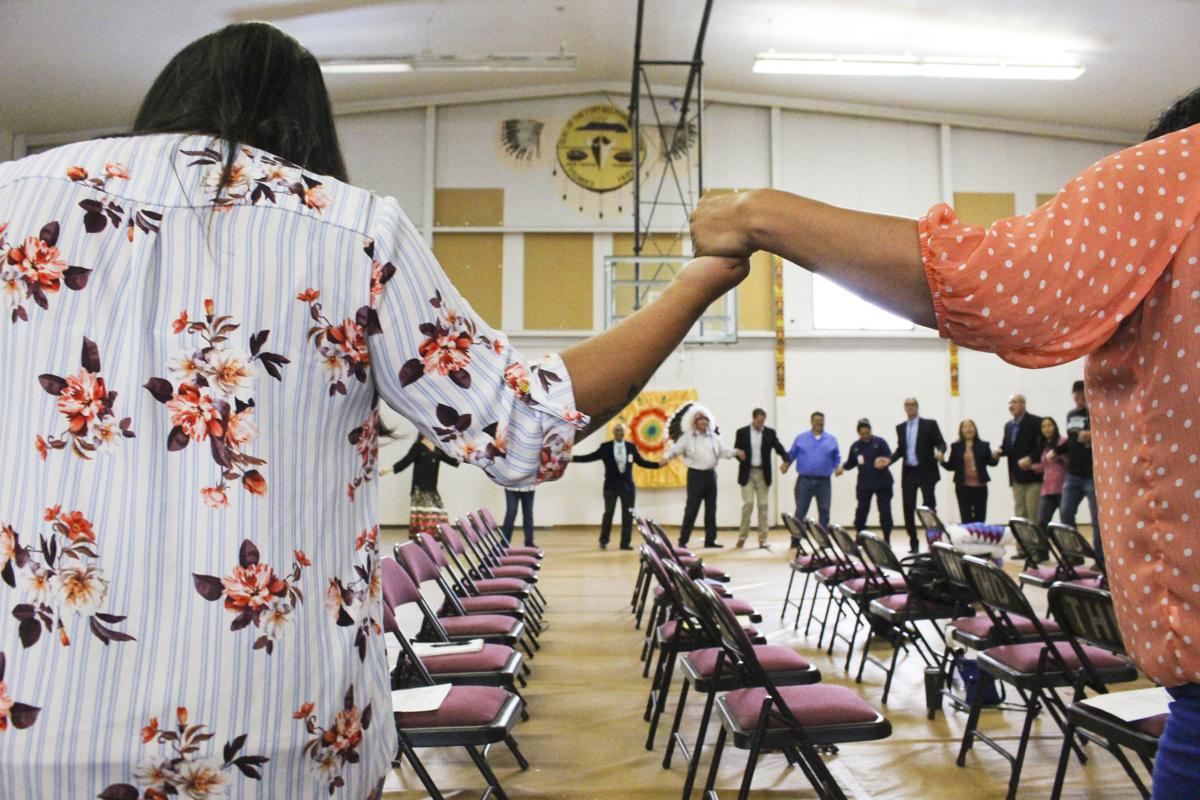 After a ceremonial bill signing, members of the Fort Belknap tribal community perform a circle dance to celebrate the community health aide program. 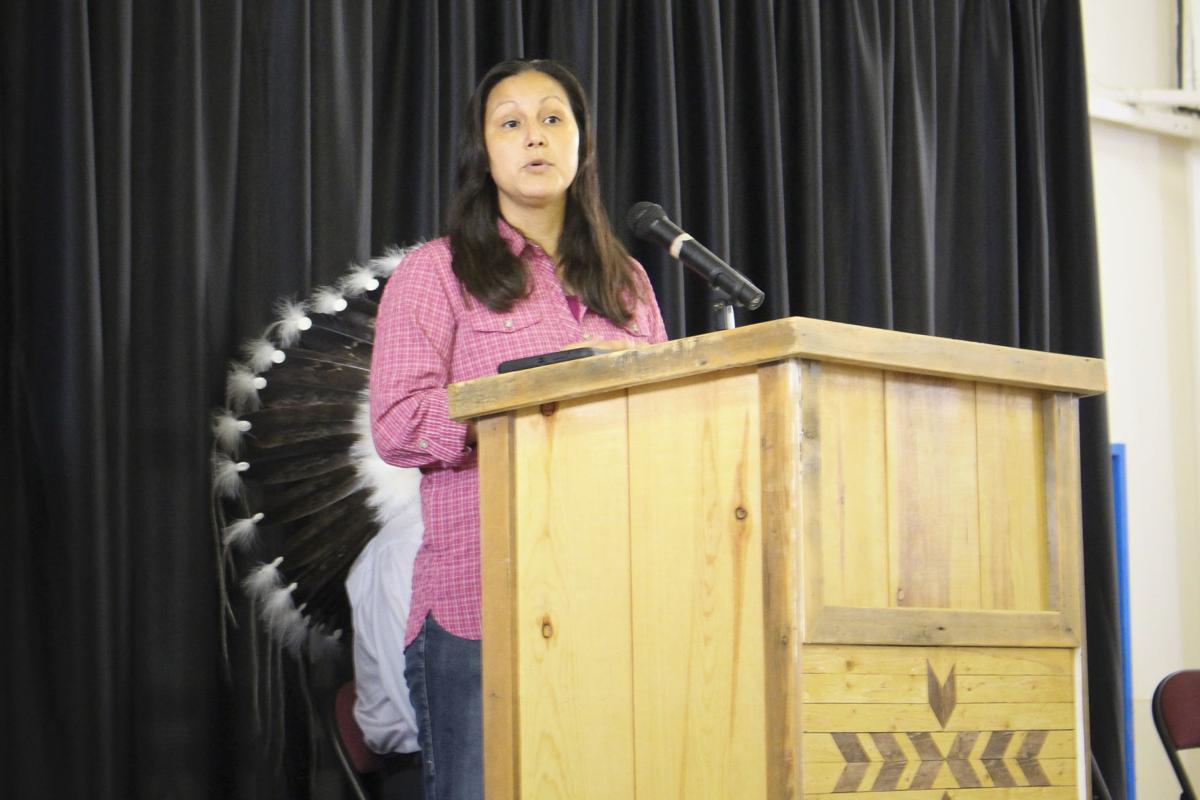 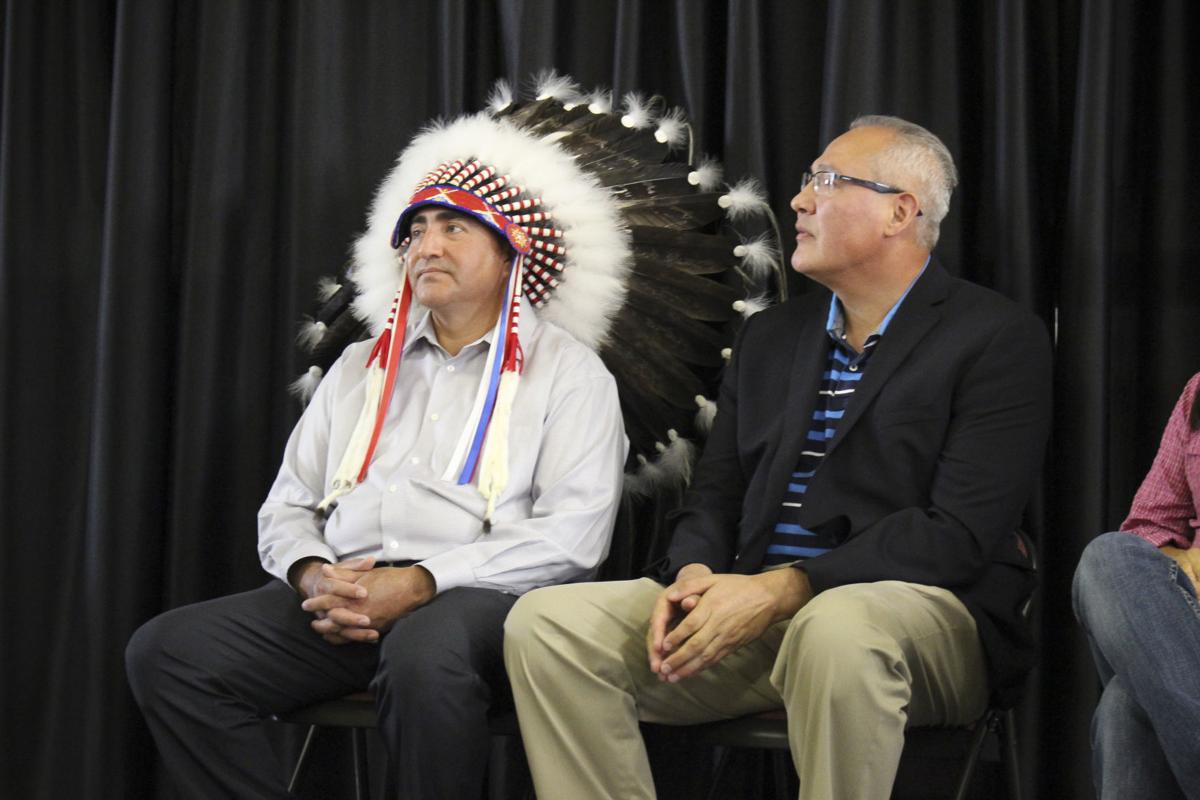 Fort Belknap Tribal Council President Andy Werk Jr. and consultant Byron Larson look on during a series of speakers at a ceremonial bill signing in Fort Belknap on Monday.

After effort from the Fort Belknap Tribal Council, which brought on a consultant to help develop the proposal, state legislators passed a law to open the door to the federal community health aide program.

Under the program, tribes working with Indian Health Services can train local indigenous people to provide basic medical and behavioral health care services, as well as basic preventive dental care. Aides can also do health screenings and in-home care, and prescribe eyeglasses. Aides will be certified by a board that sets standards and scope of practice.

Jennifer Show, a nurse practitioner with the Fort Belknap Diabetics Care Clinic who helped lead the push for the legislation, said Monday the program will let communities address shortfalls in access to health care because of a lack of people to provide it.

"It's always been hard to recruit and retain providers," Show said. "It's a revolving door. We're in north-central Montana. It's very rural and we don't have the mountains like Bozeman or Helena to draw people and help keep them here. There's ag and not much else to keep a provider, to get them to stay in a rural area."

People living on reservations in Montana also face challenges in receiving health care because of the historically under-funded Indian Health Service. Before the state passed Medicaid expansion, for years IHS facilities in Montana operated at life-and-limb status, meaning if someone was not at risk of dying or losing a limb, they would not receive care. An influx of funding from Medicaid expansion has improved that situation, but attracting medical care providers remains a challenge.

Show said the program can also bring a continuity of care to Native communities, which can improve health outcomes through consistency and stability in things like what medications a person is prescribed.

Fort Belknap Tribal Council President Andy Werk Jr. said Monday that Montana is the first state to to allow for all three branches of care under the program — community, behavioral and dental health.

Several members of tribal leadership spoke Monday before a ceremonial bill signing at the Red Whip gym in Fort Belknap. They said people from the community, who understand the culture and history of trauma, can provide more inclusive care.

"Our people are severely under-served," said Warren Morin, a member of the tribal council. "We have to start healing, and it has to come from within."

Montana Gov. Steve Bullock said the program can start addressing issues that have long faced reservation communities in Montana. Fort Belknap has taken leadership on implementing the program, but it is available to all the state's tribal communities.

"Native communities in Montana are historically underserved due to a lack of health care providers. Folks living in Indian Country often have to travel long distances to receive care, facing expensive costs; barriers like taking time off work or finding child care can stop you from pursuing services altogether."

Natives in Montana face severe health disparities, with median age of death 20 years earlier than the rest of the state. Death by injury, cancer, heart disease, diabetes and cirrhosis are also more prevalent.

In July the Fort Belknap tribe declared a state of emergency after recent suicides and suicide attempts. Bullock said increasing access to care has a heightened importance because of that.

"It's unacceptable that the lack of access to behavioral health services are particularly severe in our Native communities," Bullock said. " … It's a critical step toward addressing risk factors in suicide, which include mental heath services and substance use treatment."

The Indian Health Service recently closed a public comment period on the proposal for Montana's community health aide program. It's not clear how long it will be until the board can certify aides and their training will be established. Once in place, the program runs four years until it sunsets and has to be reauthorized.

During the legislative session that ended in April, Montana lawmakers voted down the first red flag law ever proposed in the state. After mass…

Drawing heavily on his time in the governor’s office, Democratic presidential candidate and Montana Gov. Steve Bullock said Monday he would fo…

This story has been updated to reflect a statement provided from Bozeman Health.

The state health department said Thursday that work requirements for Medicaid expansion won't start by January, but that Montana is not falling behind.

After a ceremonial bill signing, members of the Fort Belknap tribal community perform a circle dance to celebrate the community health aide program.

Fort Belknap Tribal Council President Andy Werk Jr. and consultant Byron Larson look on during a series of speakers at a ceremonial bill signing in Fort Belknap on Monday.