A trio of environmental interest groups petitioned the Biden administration Wednesday to reinstate federal protections for wolves in response to new laws in Montana and Idaho directing state wildlife managers to reduce populations.

The Center for Biological Diversity, Humane Society of the United States and Sierra Club submitted the petition to Interior Secretary Deb Haaland and U.S. Fish and Wildlife Service Principal Deputy Director Martha Williams, requesting that wolves in the Northern Rockies or across the entire West see emergency relisting under the Endangered Species Act. The department has 90 days to reply. 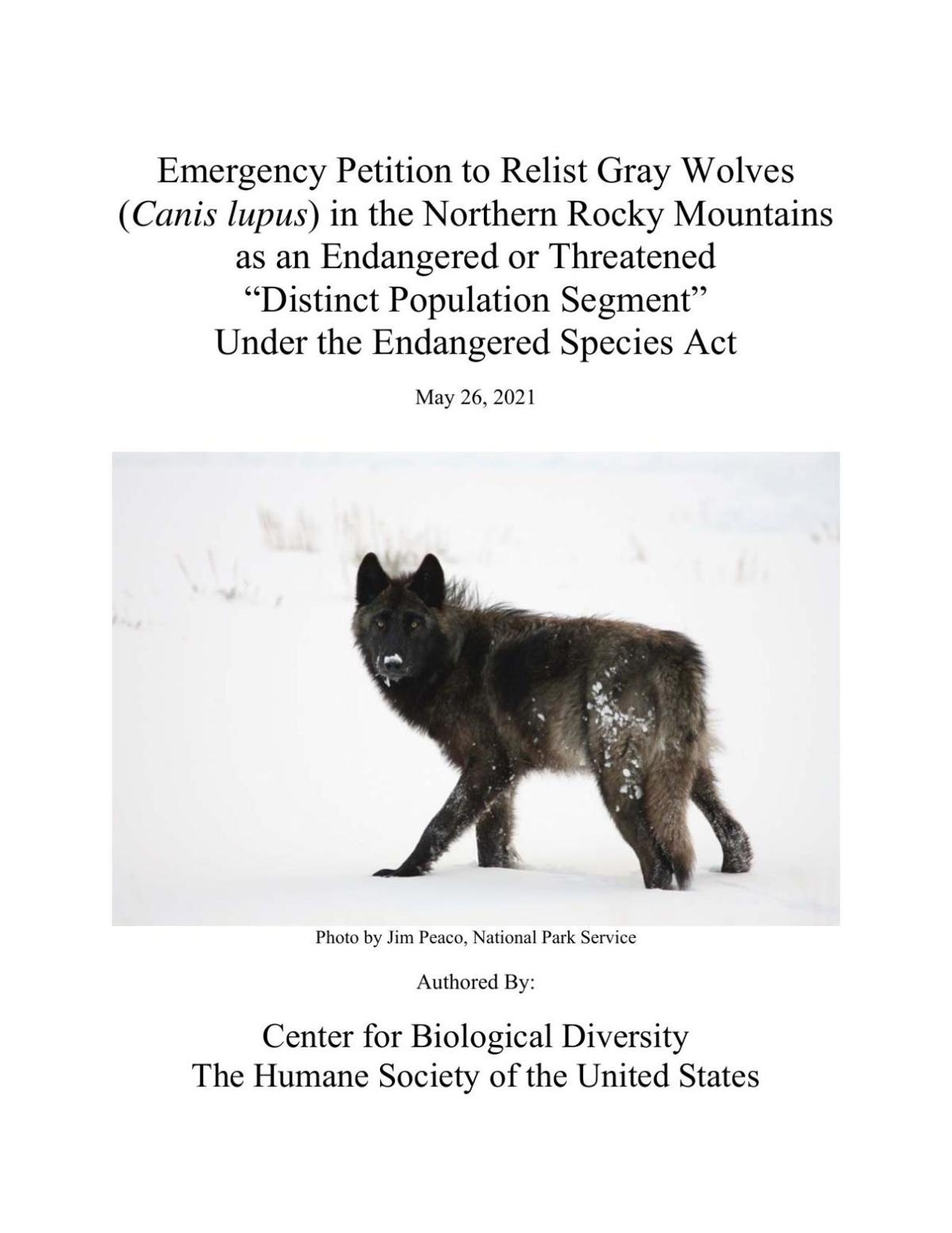 The request comes after Republicans in Montana and Idaho passed new laws aiming to lower the estimated population of 2,700 animals between the two states. The laws are necessary, supporters have said, to help bolster elk, deer and moose numbers and reduce livestock depredations. Opponents counter that some of the methods either legalized or encouraged cross ethical lines and drastic reduction of wolf populations is a drive toward extirpation.

“The best available information shows that the changes to Idaho and Montana state law will drive populations below these minimum thresholds, and strip state agencies of their already limited capacity to maintain populations above these levels,” the petition states. “Rather than wait for state wolf populations to fall below minimum recovery levels, the Service should proactively reinstate federal protections.”

The laws expand wolf trapping season by about a month with some allowance for wildlife managers to reduce the season length regionally, and to mandate allowance snares to trap wolves in addition to the currently permitted foothold traps.

Another law allows wolf trappers and hunters to be privately reimbursed for their costs of killing a wolf.

The final law directs Montana Fish, Wildlife & Parks and the Montana Fish and Wildlife Commission to reduce wolf numbers to “sustainable” populations, although does not define sustainable other than somewhere north of a minimal population of 150 wolves and 15 breeding pairs. While the law does not mandate new methods of take, that bill does suggest that in areas of high wolf densities, wildlife managers consider unlimited take of wolves by an individual, hunting wolves at night on private land and baiting wolves for hunting.

Montana’s estimated population is currently about 1,200 wolves with hunters and trappers taking about 400 annually.

Idaho’s new law signed by Gov. Brad Little makes several changes for hunters and trappers as well as providing funding toward the hiring of private contractors to kill wolves.

The law allows hunting and trapping of unlimited wolves on a single license, hunting at night and the use of snowmobiles, ATVs and helicopters. The measure could lead to a 90% reduction in the state’s 1,500-wolf population, the Associated Press reported.

Some conservation groups say such a drastic reduction is unlikely, the Idaho Statesman reported.

Wolf populations surged in the 1990s in the Northern Rockies following transplants in Yellowstone National Park and Idaho as well as natural repopulation. Federal officials first delisted wolves in Montana and Idaho in 2009 — a decision overturned a year later in court. In 2011, Democratic Sen. Jon Tester of Montana and Republican Rep. Mike Simpson of Idaho added a rider to a budget bill delisting wolves in the region.

Since 2011, Montana, Idaho and later Wyoming have managed state hunting and trapping seasons.

“These state laws, which include payments to wolf hunters and trappers to cover their expenses, hearken back to government-funded bounty systems that contributed substantially to pushing gray wolves to the edge of extinction nationwide over a century ago,” a letter accompanying the petition states. “Rather than once again resort to harmful exploitation and needless persecution, the Service must commit to gray wolf conservation and recognize the incalculable value of having wolves on the landscape.”

While Montana’s fish and wildlife commission has yet to decide on some of the suggested regulation changes, Andrea Zaccardi, attorney with the Center for Biological Diversity, believes the new laws as a whole significantly expand the methods and means people can use to kill wolves in the state.

“I think the other bills go far enough, and hopefully this (petition) signals to the commission if they do implement the suggestions and strong recommendations from the Legislature, those actions could backfire, and under federal protections nobody will be hunting or trapping wolves,” she said.

Zaccardi declined to speculate on what the groups will do, including whether that would include a lawsuit, should the wildlife service decline to issue an emergency relisting.

FWP spokesman Greg Lemon said Montana’s commission is expected to take up the slate of wolf proposals at its June meeting, where it will vote on draft provisions to be released for public comment.

Some of the legislation, such as allowing snares, includes little discretion for FWP or the wildlife commission. But others such as the bill mandating the agency reduce wolf populations leave final decisions on new regulations with commissioners.

FWP is not expected to release a target population for wolves in the state as part of the package of new regulations, Lemon said in a previous interview.

Lemon said Wednesday he could not comment directly on the petition, but touted FWP’s history and future ability to manage wolves.

“I’m confident in the state’s management of wolves,” he said. “I think we have a successful wolf management framework and we’ve adjusted it over the years. In Montana we have a healthy number of wolves and also lots of opportunity for landowners to protect property and livestock, there’s a significant amount of hunting and trapping opportunity and that’s been expanded with some of the legislation. So to the general concept of whether they need to be relisted, our response to that is we feel like we’ve proven ourselves to be very capable of managing wolves.”

The U.S. Fish and Wildlife Service declined to comment for this story.

Canary Islands: Houses and crops are threatened by the lava flow

Canary Islands: Houses and crops are threatened by the lava flow

This farm in the U.K. is for animals with special needs

This farm in the U.K. is for animals with special needs

Gov. Greg Gianforte indicated in his veto letter that he believed the fees in HB 188 were too high.

"We need to use all the tools in the box to bring health back to our forests, to protect our communities from wildfires and to create jobs in our communities," said Gov. Greg Gianforte.

President Biden weighs in on wolves

President Joe Biden recently indicated support of further protections for gray wolves, although details on his position are not entirely clear.

A one-time allowance for outfitted nonresident hunters to purchase a big game license has seen about 350 purchased in the program’s first few weeks.

Montana Fish, Wildlife & Parks is unsure how effective the new laws will be when it comes to driving down wolf populations. 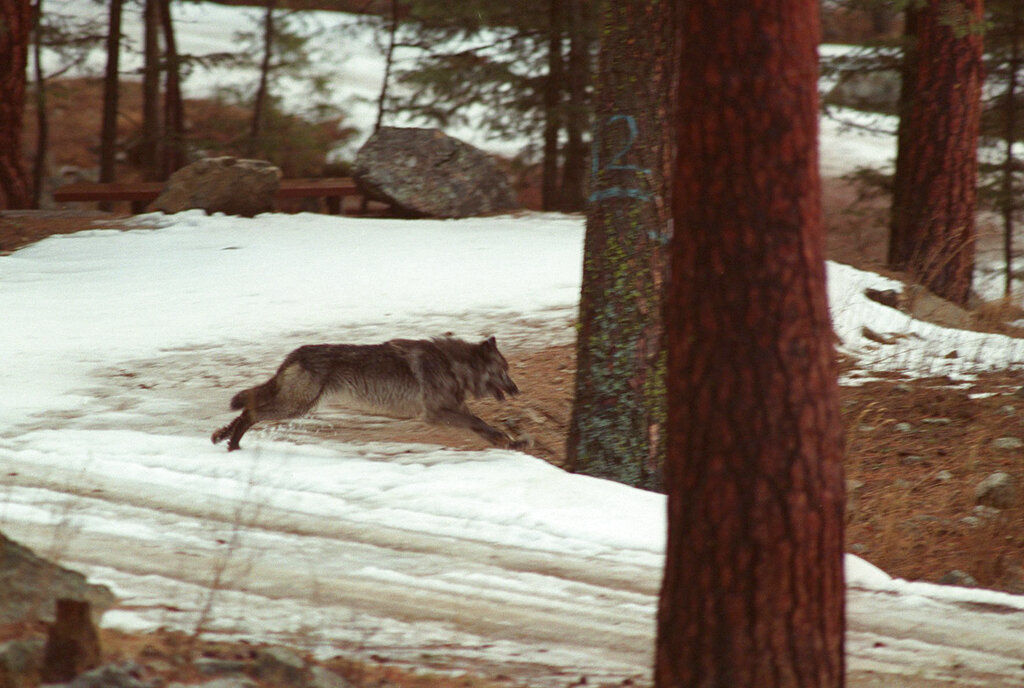 Wildlife advocates petitioned the Biden administration on Wednesday to place wolves in the Northern Rockies under emergency Endangered Species Act protections in response to new laws in Montana and Idaho.