An overwhelming majority of Montana’s GOP legislators are urging their leadership in the state House and Senate to appoint a special committee to investigate the security of the state’s election system, an effort spearheaded by Republican legislators who are pushing theories of widespread voting fraud.

The decision to appoint a special select committee, as requested in the Wednesday letter signed by 86 of the GOP’s 98 lawmakers, rests entirely in the hands of Senate President Mark Blasdel and House Speaker Wylie Galt, both Republicans. Galt didn't return phone calls requesting comment on the letter, which asks for a response from them by Oct. 6, and Blasdel declined to comment when reached Friday.

The letter proposes forming a GOP-majority committee, in which each party gets seats relative to their numbers in each chamber. Republicans hold 67 of 100 House seats and 31 of 50 Senate seats.

“Many of our constituents have reached out to us with questions about Montana election security,” the letter states. “… The Select Committee would conduct hearings about the process and security of Montana elections and propose future changes if needed; including legislation.” 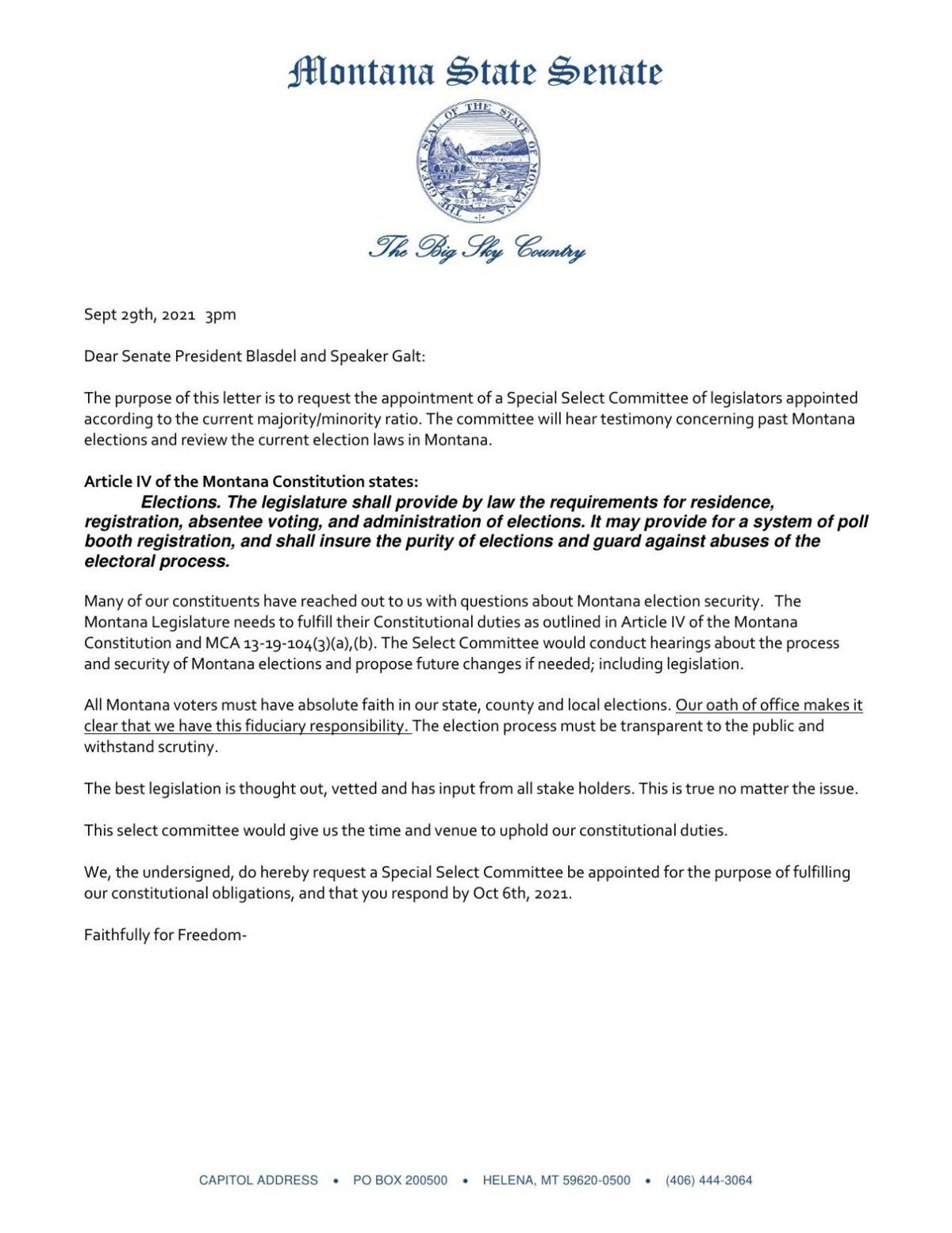 The letter doesn't outline any specific proposals, but GOP lawmakers interviewed for this story all said the effort to form a select committee has been led by a group of Republicans who have advocated for sweeping audits and investigations of the 2020 general election. Individual signatories offered widely differing goals for the proposed committee, ranging from informational testimony to statewide recounts similar to Republican-led efforts over the past year in Arizona’s Maricopa County.

Sen. Theresa Manzella, a Hamilton Republican who has been central to the effort in Montana, has also suggested enacting election-related legislation during a special session, ahead of next year’s June primaries. During an event in Hamilton last week, she told the Montana State News Bureau that she wants to require hand recounts of ballots cast in all 56 counties in Montana. She also said she is working with the Secretary of State Christi Jacobsen, a fellow Republican, to make the state’s post-election audit process “more comprehensive.”

During that event, billed as an “Election Integrity Symposium," Manzella served as emcee for speakers who presented theories that hackers infiltrated Montana voter databases and ballot-counting machines during the 2020 election. She argued that a so-called “forensic audit” is needed to uncover fraudulent votes and vote counts.

“We won’t be in session until after the next election, so we could lose a whole other election to this nefarious process unless we’re successful in getting a special select committee appointed, and delving into this issue and doing the investigation and finding the vulnerabilities that are in our statutes and creating the bills that we will have to take to the Legislature,” Manzella told a crowd of more than 200 people gathered at the Ravalli County Fairgrounds for the event. In a brief phone call Friday morning, she added that she wants to hear testimony on best practices from election officials and investigate which election offices received grants from outside organizations.

In last year's election, Republicans won by hefty margins in all statewide and federal races in Montana, as well as the presidential election. Those results were certified last November by then-Secretary of State Corey Stapleton, a Republican. The certification followed the state’s process for checking the accuracy of the election results, which includes election canvasses approved by the commissioners of each county.

The state’s post-election audit also requires hand recounts of ballots cast in randomly selected precincts in each of Montana’s 56 counties. That process, undertaken to manually check ballots cast against the results generated by the vote-counting machines in each county, is overseen by the Secretary of State.

Manzella also referred to allegations by a group of Republican activists in Missoula County that their hand-count of ballot envelopes from the general election showed a discrepancy with the vote totals reported by the county. Local election officials have stood by the county’s election results, calling the group’s methods imprecise and error-prone.

The push to revisit Montana's 2020 election and cast doubt on the existing security of the election system follows similar efforts by Republicans in other states. This week, the Texas Secretary of State announced he would embark on an audit of the election in four of that state's largest counties. GOP lawmakers in Pennsylvania last month moved to subpoena voters' personal information, and partisan investigations are also underway in Wisconsin.

To date, no hard evidence that there was any widespread fraud or hacking of the election system in the U.S. has emerged, despite the proliferation of theories reliant on statistical analyses that have been rejected by courts. Idaho's Secretary of State, a Republican, this week rejected claims of interference in that state's 2020 elections after conducting recounts in two counties targeted by the allegations.

In interviews this week, several Republican legislators echoed Manzella’s allegations of fraud, but others suggested it could provide an opportunity to reassure Montanans that their elections are secure from interference.

“I did sign the letter, because I think it’s going to take something like that to restore voter confidence, because there’s so much misinformation in the media,” said Rep. Geraldine Custer, a Forsyth Republican who spent 36 years as Rosebud County’s top elections official before running for legislative office.

Custer, who is currently running in a competitive primary in a heavily Republican Senate district, rejected the idea of conducting costly “forensic audits” of the 2020 election results. Instead, she suggested the committee’s work could consist of educational testimony from elections experts and tours of election offices throughout the state.

Like the Select Committee on Judicial Transparency and Accountability created by Republicans during the legislative session earlier this year, a new committee would have the power to subpoena public officials to testify at hearings.

Just a dozen Republican lawmakers declined to sign onto the letter, including the two top leaders and one lawmaker who is resigning to accept a job as the governor’s new budget director. One of those who didn't sign, Sen. Doug Kary, is a Billings Republican who oversaw many election-related bills last session as chair of the Senate State Administration Committee during this year’s session.

Arguing that a 56-county audit would cost “a ridiculous amount of money,” Kary suggested any investigation the committee does will fail to turn up any widespread meddling in the 2020 election.

“What would the benefit be? That everybody feels as comfortable with the election as I am? They’re going to say you proved us wrong?” he asked. “Or are they going to say, well, they still did it, we just couldn’t find it … we couldn’t put our thumb on it. I think it’s the latter.”

Republicans this year oversaw a legislative session in which some of the most substantial changes to Montana’s election statutes in decades were passed and signed into law by Republican Gov. Greg Gianforte. While GOP lawmakers advanced the bills in the name of tightening up election security, Democrats condemned the changes as designed to suppress turnout, particularly among voting demographics that lean Democratic. Four of those bills face ongoing challenges in court.

“Their letter offers no evidence that anything was wrong with Montana’s election system,” Abbott said Friday. “It’s disappointing and dangerous that there’s this nationalized effort to undermine confidence in a core function of our democracy, to see so many members of the GOP going in on the attack and asking for a costly committee without any evidence.”

If a special committee is indeed formed, Abbott said she plans to recommend Democratic legislators with expertise in elections.

The Democrats' leadership in the Senate likewise condemned the push for a special committee.

"It is downright insulting that Republicans continue to push the lie that the 2020 election wasn’t secure or fair and that the results were somehow false," Senate Minority Leader Sen. Jill Cohenour, of East Helena said in a statement. "Instead of wasting taxpayer dollars on this political stunt, our Republican colleagues ought to focus their energy on the actual issues facing Montanans."

DOA spokesperson Belinda Adams said the department is not considering suspending or reversing its order that employees return to their on-site workplaces as of Sept. 7.

A number of groups paid lobbyists during the 2021 session without saying what legislation they were lobbying for or against or funneled lobbying expenses through other groups.

A few likened the public health measure implemented in schools like Billings and Missoula to child abuse.

The question stems from the criminal case of Dana Bullcoming, a former Bureau of Indian Affairs law enforcement officer who was convicted of raping a Northern Cheyenne woman.

It's the second lawsuit challenging Montana's "vaccine discrimination" law, which is the only such law in the country that applies the prohibition to the private sector.