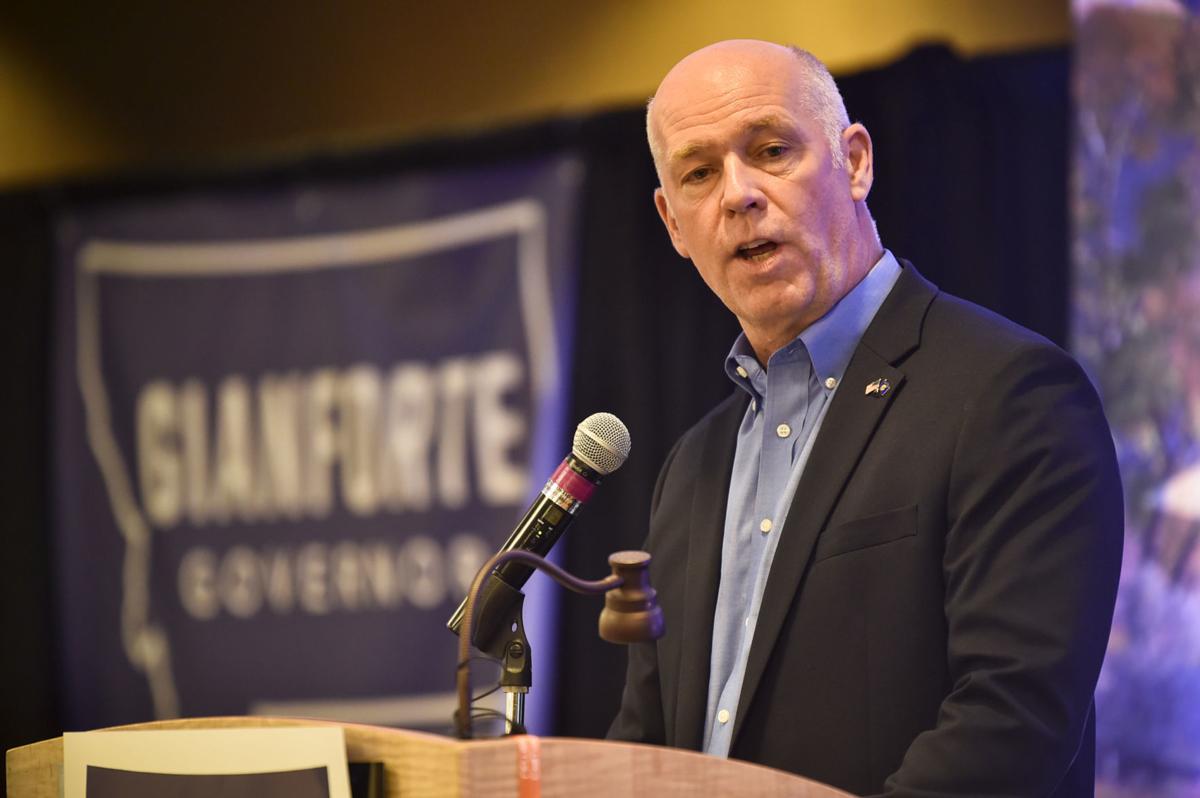 Congressman Greg Gianforte announces his bid for Montana governor on Friday at the Montana Republican Party convention in Helena. 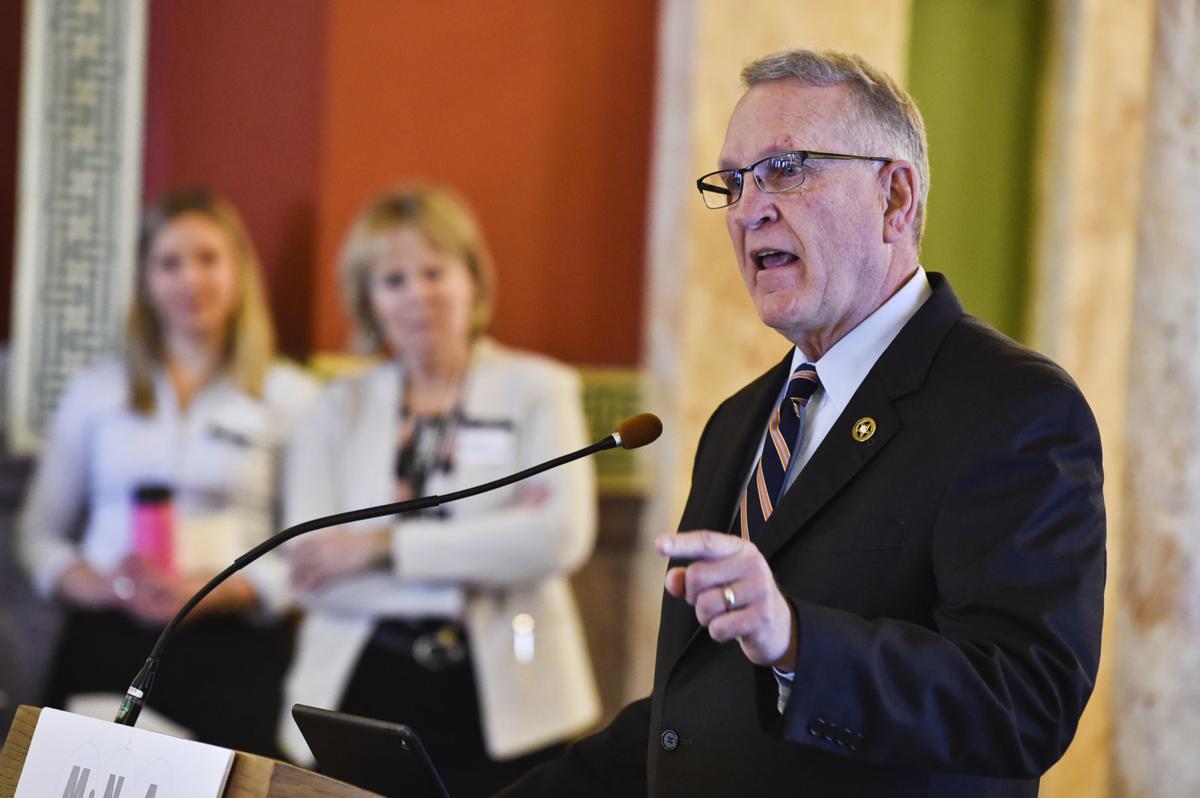 Attorney General Tim Fox speaks at a gathering of Montana nonprofits in the Capitol Rotunda recently. 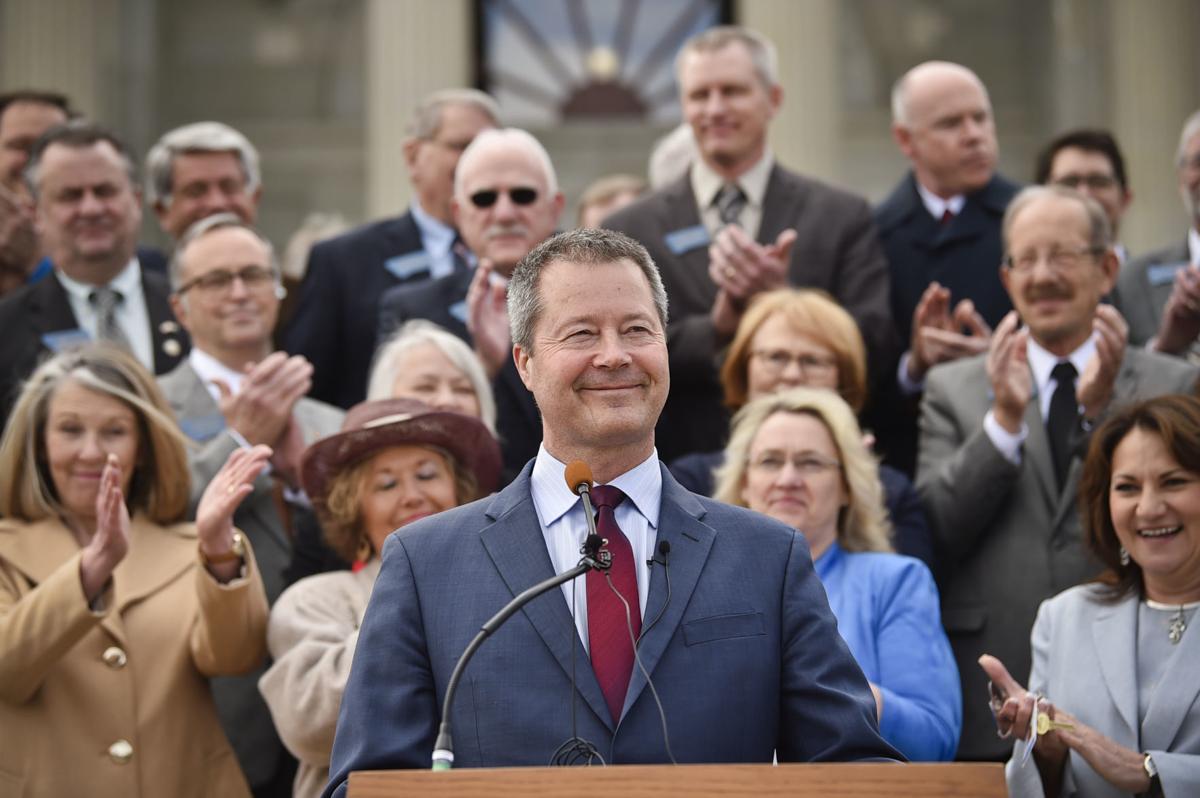 State Sen. Albert Olszewski, who ran in the Republican U.S. Senate primary last year, announces Wednesday he's joining the race for governor in 2020 on the step of the Montana State Capitol.

One of the Republicans seeking to be their party's pick to run for governor in the 2020 general election has called for a pledge of unity, and while the other two men in the race support the notion of a harmonious GOP, they are critical of aspects of the proposal.

U.S. Rep. Greg Gianforte, who shook up the statewide GOP landscape when he announced his bid in June, unveiled his unity pledge at the Gallatin County Republican Central Committee’s 2019 Fall Roundup over the weekend.

State Attorney General Tim Fox announced his governor candidacy in January, followed by state Sen. Al Olszewski in April. The state GOP's struggle to unite the party has simmered and scalded for years, flaring up around things like a battle to continue Medicaid expansion earlier this year when factions of the party were openly critical of each other on the state House floor.

The pledge would require candidates to support whoever wins the primary next June in the general election the following November. It also asks candidates to make a financial contribution to the nominee, help the state party raise funds on their behalf by sharing the defeated's contributor list, and make campaign appearances with the nominee and other GOP candidates.

Gianforte said Monday the pledge is necessary because he wants to see Republicans take back the governor's office after 16 years in the hands of Democrats. That's something members of the party laid out as a priority last fall before the start of the 2019 legislative session.

Gianforte said he hadn't heard a response from Fox or Olszewski by Monday.

In an interview Monday, Fox said he wants to see a united Republican Party, but he thinks Gianforte is one of the main reasons for concern over division.

"I'm all about party unity and I've worked hard for many, many Republican candidates," Fox said. " ... Party unity is all about not abandoning Congressman Gianforte's congressional seat and causing so many people to run for other things."

"Party unity is about keeping your promises when you run for election and people work hard to get you elected. You should continue to run for reelection as long as you can," Fox said. " ... Unfortunately Congressman Gianforte has really caused a lot of division and consternation in the party, which makes it very difficult for people to unify."

Fox said he would be open to a unity pledge with two additions — candidates would vow to run for reelection to the seats they hold as long as possible and not self-fund their campaigns. Gianforte is wealthy from a technology company he started in Bozeman and spent about $6 million of his own money when he ran for governor in 2016 and lost to incumbent Democratic Gov. Steve Bullock. Gianforte has already loaned his campaign $50,000 this cycle and Olszewski has loaned himself $100,000. In the month after he announced, Gianforte pulled in more than $500,000, while Fox raised $312,000 in the first quarter of the year. Olszewski raised $142,000, including the loan.

"Let's have a discussion of the ideas each of us have, and my pledge is that whoever wins the primary, I'm going to be behind them 100 percent," Gianforte said.

Olszewski said he was surprised by the call for the pledge, but he was willing to follow it and looks forward to getting support from both Gianforte and Fox if he wins the primary.

“I believe regardless of a pledge, there’s going to be unity in the general election. I don’t (think the pledge is) necessary, but if he’s worried he can’t get the support of the party, I’ll sign it if it makes him feel better,” Olszewski said of Gianforte.

After both the 2018 U.S. Senate primary, when he came in at the bottom of the five-way race, and his failed 2012 bid as lieutenant governor candidate with Jim Lynch running for governor, Olszewski said he helped the eventual nominee in the general election.

"I've already shown through my actions in the past ... we raised money and we walked the horse for (the nominees) in northwestern Montana," said Olszewski, who lives in Kalispell.

Jeremy Johnson, a political scientist at Carroll College, pointed out Monday pledges like this are unenforceable and don’t get much traction with voters.

“It’s a guide for how other members of the party can relate within the party,” Johnson said. “It may have a bigger meaning internally, within the Republican political establishment within Montana, perhaps.”

Political analyst and University of Montana professor Lee Banville said it's extraordinary that the pledge had to be proposed at all.

"Because why wouldn't you raise money or campaign with the person who defeated you?" he asked. "It's somewhat striking you would need a pledge to commit to that. That may say more than the actual pledge does, that they felt this was more of a necessary statement. ... I think the audience for this statement is more the GOP, to say 'Look, I may have entered this race and maybe complicated scenarios that most people had already mapped out, but I'm still a good member of the party, and I hope we all will be.'"

Banville said Democrats will seize on accusations made during the primary for campaign messaging in the general election, both to excite their own voters and depress energy among Republicans.

On an unseasonably warm November day almost a year ago on the third story of the Capitol building, Republican leaders in the state made their …

One of the Republicans running for governor in 2020 is calling for 10 primary debates to help voters assess the field.

No charge against Stapleton for state pickup misuse

The city of Helena will not take any action against the Secretary of State for his misuse of a state pickup.

Bullock: 'No other option' but impeachment if Congress doesn't see whistleblower complaint

Montana's governor says impeachment proceedings are the only option if Congress can't review a whistleblower complaint against the president.

DNC funds rural political organizer in Montana ahead of 2020 elections

Ahead of the party chairman speaking in Helena on Tuesday night, the Democratic National Committee announced it is funding a rural political o…

Republican governor candidate Al Olszewski, a state senator from Kalispell, has picked a fellow state senator as his running mate.

Montana Lt. Gov. Mike Cooney asked his fellow Democratic gubernatorial candidates Wednesday to limit outside spending and self-funding in the election by signing a pledge that one opponent's campaign called a stunt that could handicap the party's nominee in the November 2020 general election.

Montana Dems all getting along in governor's race primary

Though it’s just the fall of 2019, the way the political world works now is that it’s already a busy season for the primary election that will…

The Lewis and Clark County Republican Central Committee voted Monday night to delay a GOP governor primary forum because not all candidates could attend.

Congressman Greg Gianforte announces his bid for Montana governor on Friday at the Montana Republican Party convention in Helena.

Attorney General Tim Fox speaks at a gathering of Montana nonprofits in the Capitol Rotunda recently.

State Sen. Albert Olszewski, who ran in the Republican U.S. Senate primary last year, announces Wednesday he's joining the race for governor in 2020 on the step of the Montana State Capitol.