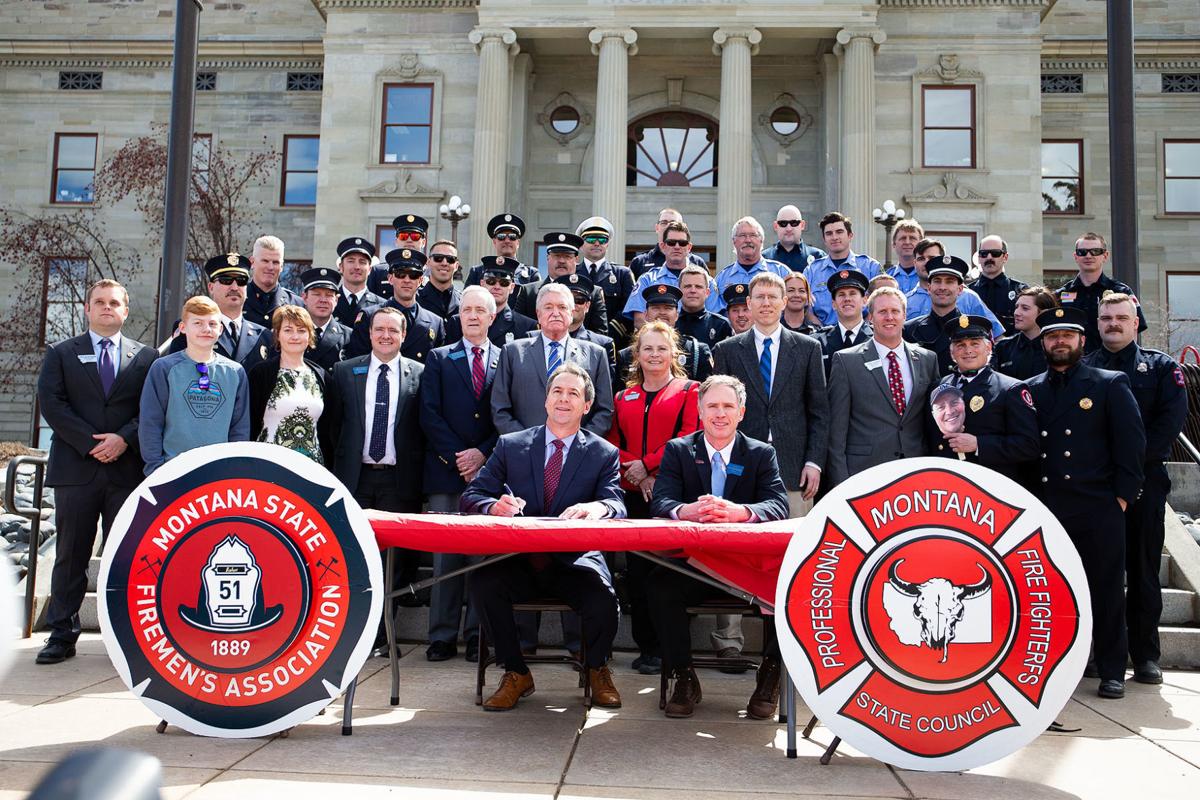 Gov. Steve Bullock signs the Firefighter Protection Act while flanked by firefighters from across the state on the Capitol steps Thursday. 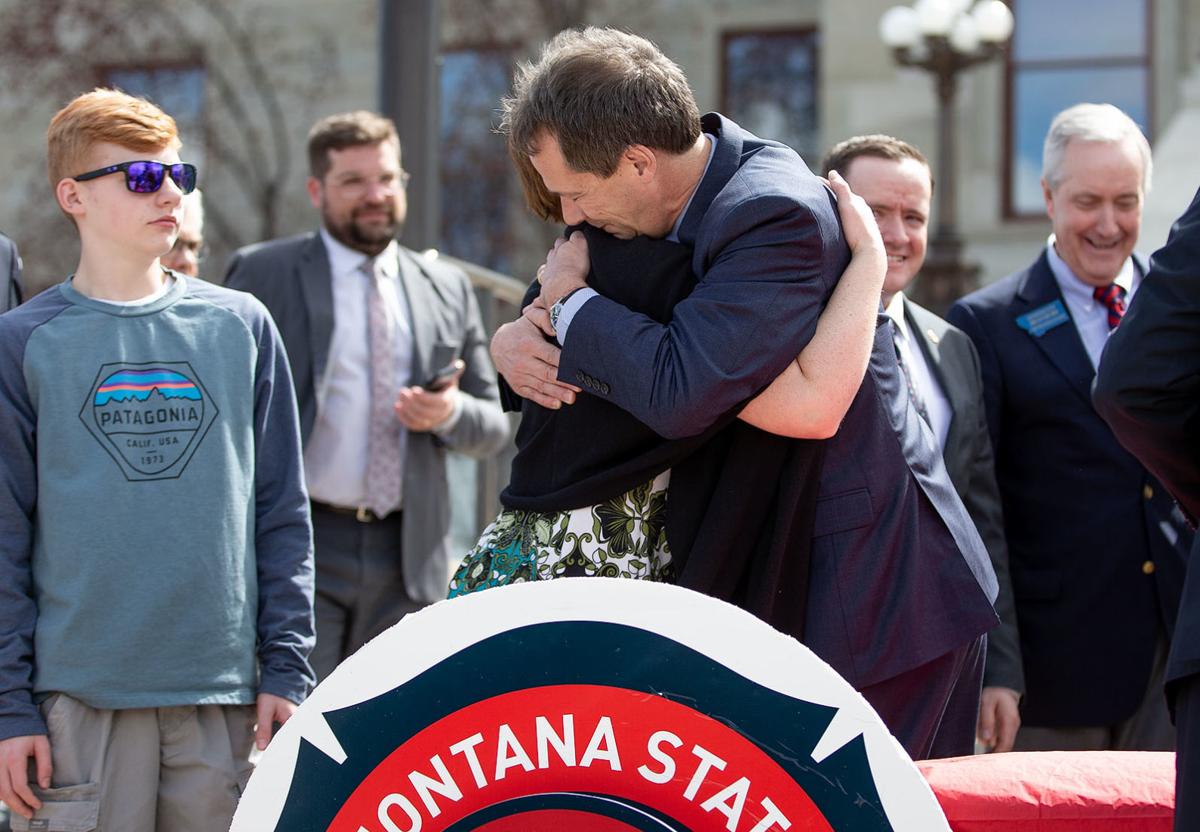 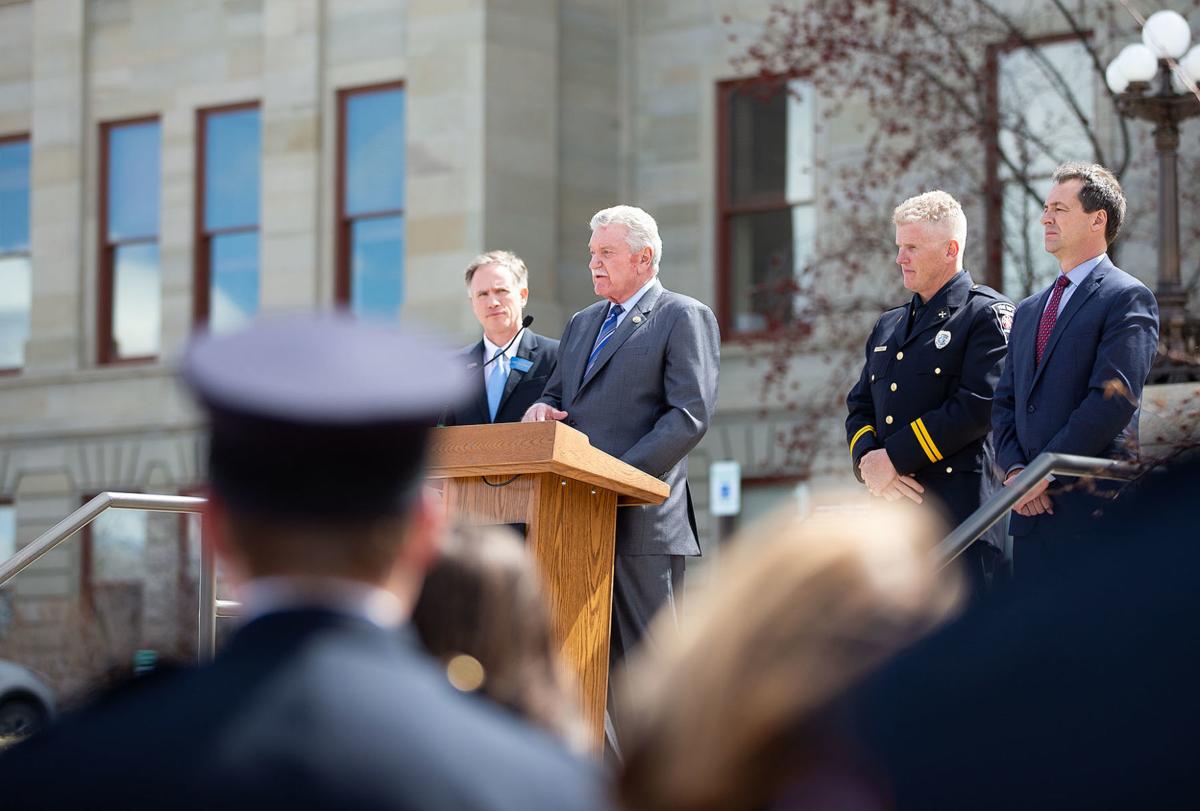 Jack McConnell wants to be a firefighter someday.

When the 3-year-old is asked if he might want to practice law like his father, state Sen. Nate McConnell, D-Missoula, the answer, is “firefighter,” according to the elder McConnell. Governor, perhaps? “Firefighter.”

A visit to the Missoula Fire Department and the present of a fire hat likely influenced this, McConnell admits. Even asking if he’d like to become a superhero garners the same response, McConnell said Thursday before the Firefighter Protection Act he carried through the Senate was signed into law.

Gov. Steve Bullock’s signature capped, by his count, a 20-year fight for a proposal that even U.S. Sen. Jon Tester deemed “critically important” in a January visit to the Capitol. Firefighters are presumed to have a valid workers’ compensation claim for several occupational diseases, mostly forms of cancer, if they've served a certain number of years since 2014 after the law takes effect on July 1.

Insurers must prove by preponderance of the evidence that a firefighter was not exposed to “smoke or particles in a quantity sufficient” to have caused the disease.

The law requires 15 years of service for claims of multiple myeloma or non-Hodgkin's lymphoma to qualify, 10 years for brain or colorectal cancer, and four years for lung cancer. The disease must manifest within 10 years of the end of a firefighter’s career, though the law disqualifies claims for those with a history of tobacco use.

Among other data that proponents of McConnell’s bill cited in its journey through the Legislature, a 2013 study by the National Institute for Occupational Safety and Health found a 14 percent higher rate of cancer mortality among firefighters than the general population.

“There are rarely opportunities for somebody to carry a bill that means so much to our heroes,” said McConnell, flanked Thursday by state and national flags flown at half-staff in front of the Capitol. Bullock gave his first half-staff proclamation in two months Wednesday to honor Montana firefighters who died of a job-related illness.

"Today, firefighters all across the state woke up to this symbol in honor of their fallen brothers and sisters," Bullock said. "Today every firefighter should know that Montana has your back. And it's about damn time."

Firefighters in dress uniform traveled from all around the state — Whitefish, Anaconda, Butte, Missoula, Billings, Bozeman, Helena — to witness the bill’s signing.

They also came from Great Falls.

McConnell’s bill lost one of its closest allies in the Electric City when Jason Baker died on Feb. 20. Baker was diagnosed with lung cancer 16 years into his career with Great Falls Fire Rescue, according to the Great Falls Tribune, and worked toward presumptive coverage legislation for “more than a decade” leading up to his death at the age of 45.

Baker’s family attended Thursday’s ceremony, where they were recognized by General President Harold Schaitberger of the International Association of Firefighters.

Baker’s family issued a joint statement Thursday on what the bill’s final approval meant to them.

“Jason’s legacy will be remembered through his tireless advocacy of health and safety coverage for his brothers and sisters in the fire service,” the statement read. “It is gratifying to have this bipartisan bill signed by Governor Bullock after 20 years of diligent effort. While we are deeply saddened that Jason did not live long enough to observe this momentous occasion, we are grateful that other firefighters and their families will finally have the coverage they deserve.”

If Senate Bill 160, also known as the Firefighter Protection Act, becomes law, Montana firefighters could be presumed to have a valid claim of…

As the Montana Legislature nears its final days, some lawmakers are objecting to policies being added into so-called budget companion bills in…

Montana Gov. Steve Bullock vetoed three bills Thursday before legislators left for an Easter break, drawing the ire of a Republican who carried legislation to reduce taxes on some Social Security income.

A bill delaying the sunset on seven state economic development programs passed the Legislature on Thursday, now requiring only the signature o…

Gov. Steve Bullock signs the Firefighter Protection Act while flanked by firefighters from across the state on the Capitol steps Thursday.