The state of Montana is requesting help from the Federal Emergency Management Agency for individuals facing substantial losses from the flooding that's devastated parts of south-central Montana.

The request, signed by Gov. Greg Gianforte on Wednesday, seeks to activate FEMA's Individual Assistance Program, which is part of the presidential major disaster declaration issued by the Biden Administration last week.

“No Montanan should have to go through what our neighbors impacted by flooding have," Gianforte said in a press release Thursday. “With access to the Individual Assistance program, Montanans who have had homes destroyed or property damaged by this disaster will have more resources to recover and rebuild.”

Most people, even those living in flood plains, don't have flood insurance because it's expensive. Normal homeowners insurance and renter policies do not cover damage from flooding. In the flooding that hit Montana last week, homes that were damaged were also outside of areas that are normally expected to flood. 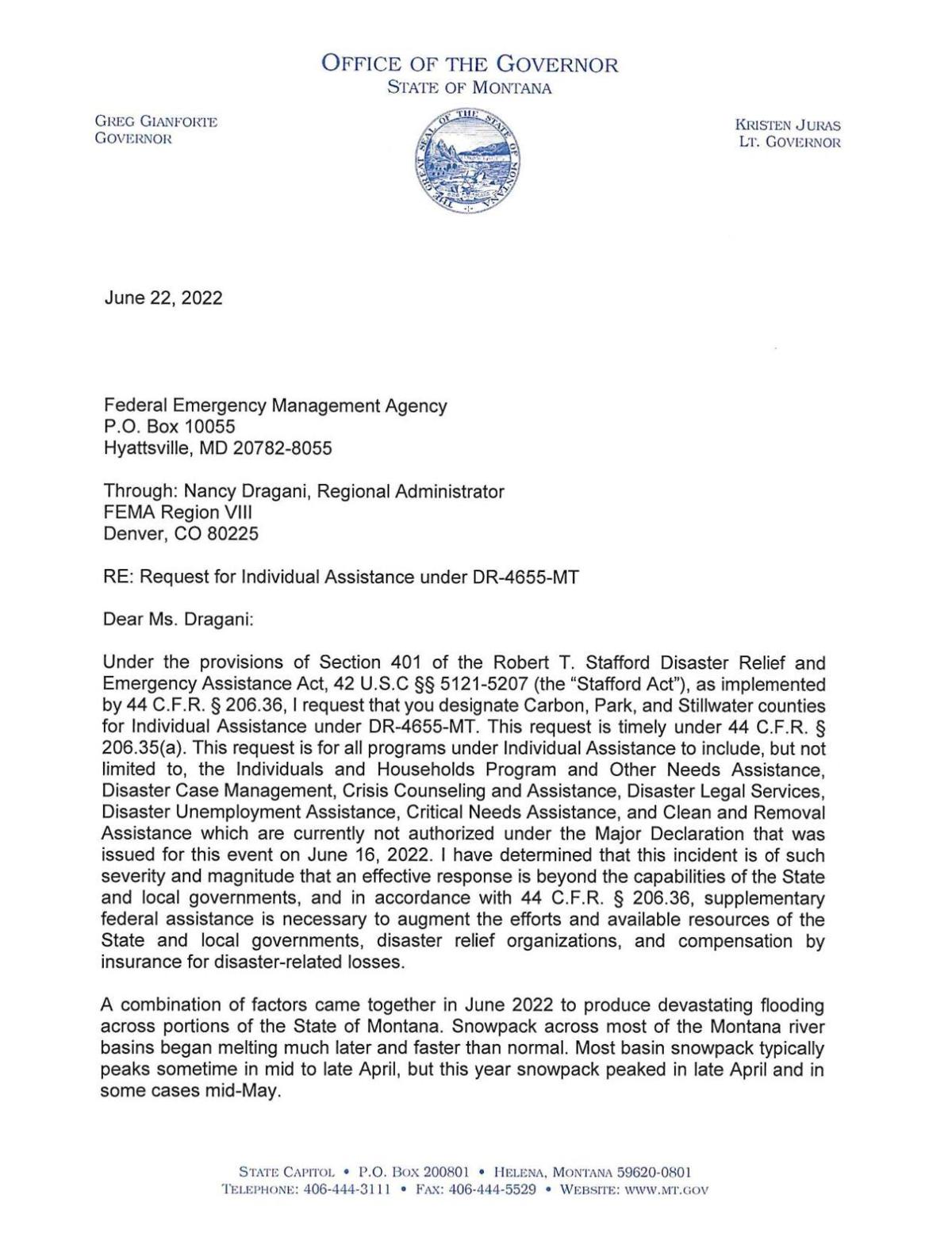 In a Wednesday interview, state Insurance Commissioner Troy Downing said the numbers of people who had flood insurance in those areas was "horrible."

"Because the survivors of these floods are particularly vulnerable, the size and scope of the devastation in these communities makes it clear that no amount of insurance is adequate to address the immediate or long-term needs of the survivors of this destruction," the letter reads.

Another challenge for those facing loses from the flooding is the lack of affordable housing. The letter points out that the cost of a mortgage in Park County averages about 37.7% of a household's income, and that figure is 33.8% in Carbon County. Rent costs present similar financial burdens, and the median home value has jumped dramatically in the region.

There are also a higher percentage of mobile homes, 12% in Carbon County, nearly 15% in Stillwater, and almost 10% in Park, than in the rest of the country. The letter estimates there were 686 mobile homes in high flood-risk census tracts, including 441 in Park County, 98 in Stillwater and 147 in Carbon.

"Mobile home residents have been shown to be disproportionately impacted by disasters — due to physical characteristic of the home, location, social vulnerabilities of residents, and complicated ownership arrangements which means they can be excluded from some legal protections," the letter states.

The letter also says that nine major highways in the region have significant damage and remain inaccessible, in addition to numerous bridges.

In addition to residential losses, the letter says that the $100 million in labor income tied to Yellowstone National Park will also be dramatically hit by flooding.

In Carbon County, about 39% of all jobs and 26% of wages are tied to travel and tourism. In Park County, it's 31% of jobs and 26% of wages. The mine in Stillwater County was completely cut off due to a bridge failing and alternate routes are threatened due to safety concerns. Mining accounts for more than 40% of jobs in the county, and 1,000 employees are out of work, the letter says.

There are an "unknown number of injuries" from the flooding and one confirmed death of a person recreating on high water.

The money can be used for federal-aid highways damaged by flooding and emergency repair work that's eligible to be paid for with the cash includes "emergency repairs needed to restore essential traffic, minimize the extent of damage, or protect the remaining facilities as well as permanent repairs necessary to restore the highway to its pre-disaster condition," according to a press release.

On this week's episode, Holly Michels of the Montana State News Bureau, talks about the governor's whereabouts last week and what's being done in response to the historic flooding.

The initial estimate of damage to transportation infrastructure alone is $29 million.

“I have not been brought in, I have not had conversations with anyone relative to transitioning Montana to managed care,” said Mike Randol, the state's new Medicaid director.

Blue Mountain Clinic, a family practice and primary care clinic in Missoula, said it will also limit who it can provide medication abortions to.

The state GOP voted support an abortion ban as part of its party platform, without exceptions in the case of rape or incest.