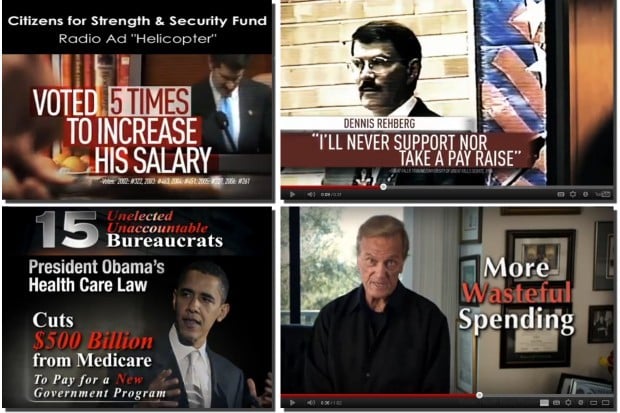 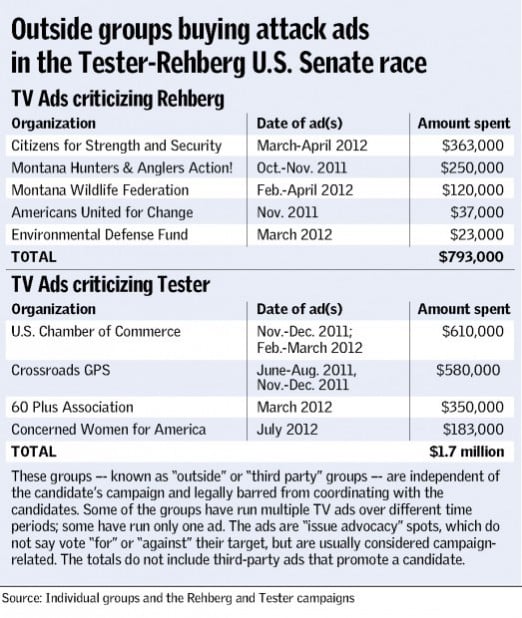 In Montana’s high-profile U.S. Senate race, incumbent Democrat Jon Tester and his main Republican challenger, Rep. Denny Rehberg, have spent little on TV ads – but a drove of interest groups is busy doing it for them.

These are the purveyors of “outside money,” already approaching $3 million in this race, spent mostly trying to sully the reputations of either Tester or Rehberg.

And, according to most political observers, Montana voters are seeing just the beginning of what could be a flood of outside spending on their Senate race.

“My rule of thumb is that they want to ramp up (the spending) when you get closer to the election,” says David Parker, a Montana State University political scientist following the race. “So if you’ve seen this much (spending) a year out … that’s just a taste of what’s coming.”

So, who’s spending all this money? And what could it mean for the race?

The prominent ads going after Tester so far are from the U.S. Chamber of Commerce, Crossroads GPS — a conservative group with links to former Bush adviser Karl Rove — and the 60 Plus Association, who together have spent more than $1.5 million on TV ads.

On the anti-Rehberg side, a group called Citizens for Strength and Security, which apparently has ties to union groups, and two wildlife/

Various other groups have spent another $800,000 to $1 million on broadcast ads attacking or supporting either candidate.

While the law prohibits these groups from coordinating with the campaign of the candidate they’re assisting, their line of attack often mirrors the attacks mounted by their favored candidate.

For example, the 60 Plus ad, which features former singer Pat Boone and began running statewide this month, blasts the federal health-reform law and Tester’s support of it — a central theme of Rehberg’s campaign against Tester.

The same goes for the ad this month from Citizens for Strength and Security, ripping Rehberg for accepting congressional pay raises – an issue the Tester campaign has focused on.

These outside-money ads in Montana also have something else in common: Almost all of them are sponsored by nonprofit groups, which do not have to reveal who finances the ads.

The ads are known as “issue-advocacy” spots, which don’t say vote “for” or “against” a candidate, instead mentioning the candidate’s name, usually in a negative way, in connection with an issue.

Because they don’t technically advocate for or against a candidate, they’re largely exempt from most campaign reporting and disclosure requirements.

Tester, up for re-election to a second term, has denounced the third-party ads running against him as purveyors of half-truths and lies, saying big-money interests are trying to buy the election.

“We encourage all Montanans to see what organization is responsible for any third-party ad,” says Tester’s campaign spokesman, Aaron Murphy. “Who is it? What do they stand for? Who bankrolls them?

“Unfortunately, much of this information is not transparent, and Jon is trying to change that.”

Rehberg’s campaign is also critical of the groups taking him on, but says it’s confident voters will see through what they call misleading messages.

“Montanans know the truth when they see it, and voters will ultimately make an informed decision based on whether they agree more with Denny’s ideas for spurring free enterprise to create jobs, or Sen. Tester and President Obama’s agenda of a bigger, more costly government in Washington,” says Rehberg campaign spokesman Chris Bond.

The Rehberg campaign also notes that Tester has been aided by large TV ad buys last year by outside groups that say positive things about Tester, such as banking and pro-Medicare groups.

But most of the action in recent months has been on the negative side, which Parker says is par for the course with outside spending.

Having an outside group pound away on an opponent benefits the other candidate in two ways, Parker says: It gives the candidate cover from any backlash for a negative attack, because it was made independently, and it usually forces the target of the criticism to respond, which costs money.

“It changes the dialogue in the campaign,” he says. “You’ve got to respond, and it forces you to get out ahead (with your own ad). To some extent, negativity begets negativity.”

The groups who mount these ads say they’re just part of the political process, supported by people who care about public policy or the particular issue they’re using to criticize or support a candidate.

“We on the center-right want to make sure our voices and our issues are advocated for,” says Nate Hodson, a spokesman for Crossroads GPS. “People can categorize it in different ways, but our focus is on changing the direction of the country.”

Officers of Crossroads GPS have close ties to the Republican Party and its website says the group stands for “limited government, freedom, low taxes (and) individual responsibility.”

The group and its sister organization, American Crossroads, intend to spend $240 million trying to influence federal races nationwide in 2012, Hodson says. They don’t reveal who’s providing that cash, unless required, he says.

When asked why the groups won’t disclose their donors, Bryan Goettel, a spokesman for the U.S. Chamber of Commerce in Washington, D.C., says they prefer to have the focus be on their message, rather than their financial supporters.

“It’s our job to represent the business community,” he says. “Member companies use us to be their voice in Washington. … They can get a lot of public blowback from being disclosed.”

Citizens for Strength and Security, which is spending at least $360,000 on its TV ads attacking Rehberg, has no telephone number on its website and ignored an email asking for information about the group.

Two hunting-and-fishing groups also have run ads criticizing Rehberg for his co-sponsorship of bills they say could reduce access for hunters, or harm wildlife habitat.

Tim Aldrich, president of the Montana Wildlife Federation, says its recent TV ad criticizing Rehberg isn’t meant as a campaign ad. He says the group tried to meet with Rehberg about his co-sponsorship of a bill to remove protections from roadless forest land, but that Rehberg didn’t answer — so the ad began running this month in Helena TV markets.

“It’s an accountability measure for me,” Aldrich says. “We felt it was really important to the sportsmen and the hunters and the anglers of this state, and that we needed to talk about it.”

Ad Watch: Most of the claims against Tester are misleading or false

This 60-second spot by the 60 Plus Association, criticizing Sen. Jon Tester, first aired in Montana two weeks ago.