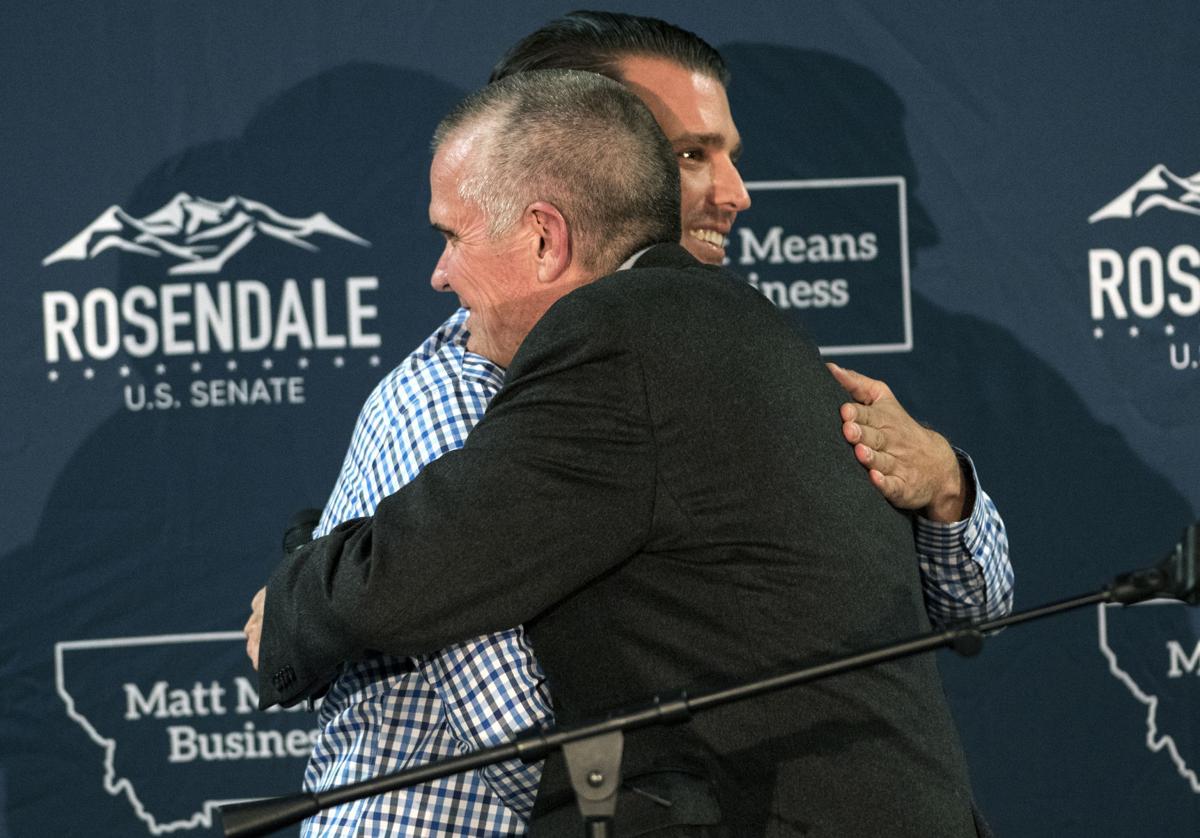 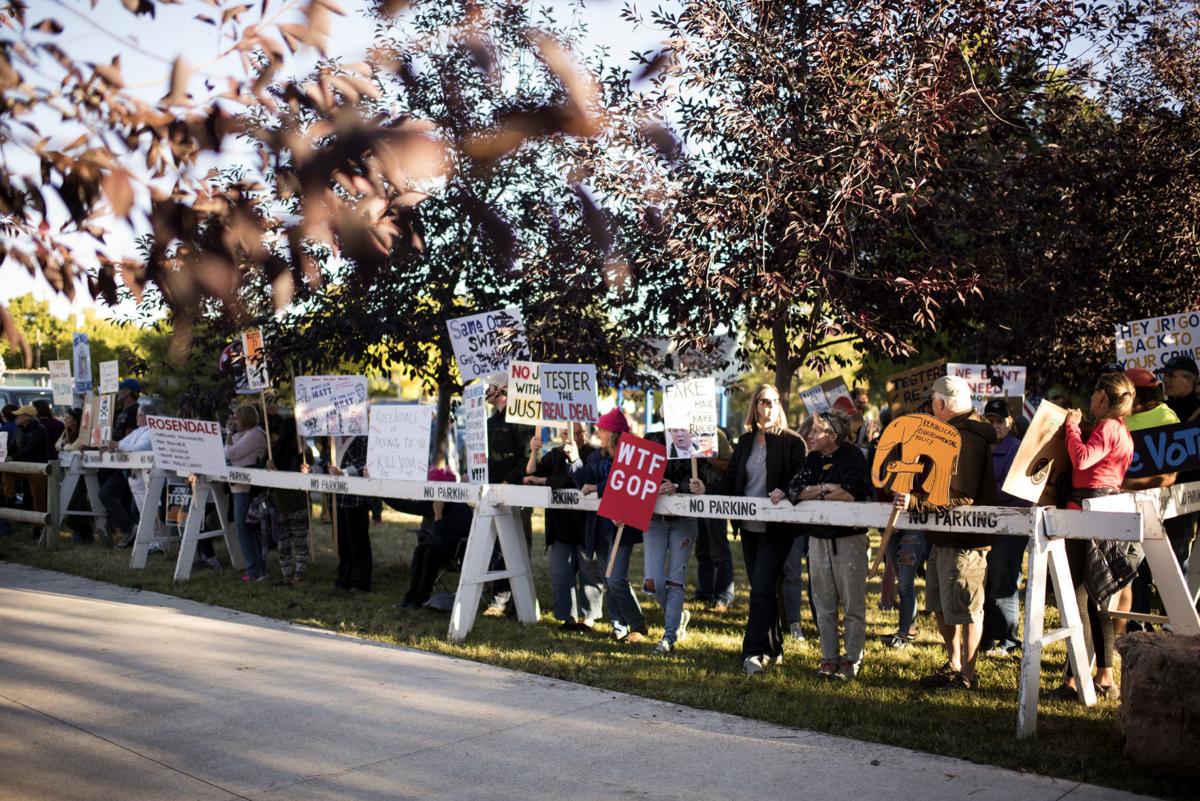 Protesters stand outside the Gallatin County Fairgrounds Tuesday afternoon ahead of a campaign visit by Donald Trump Jr. 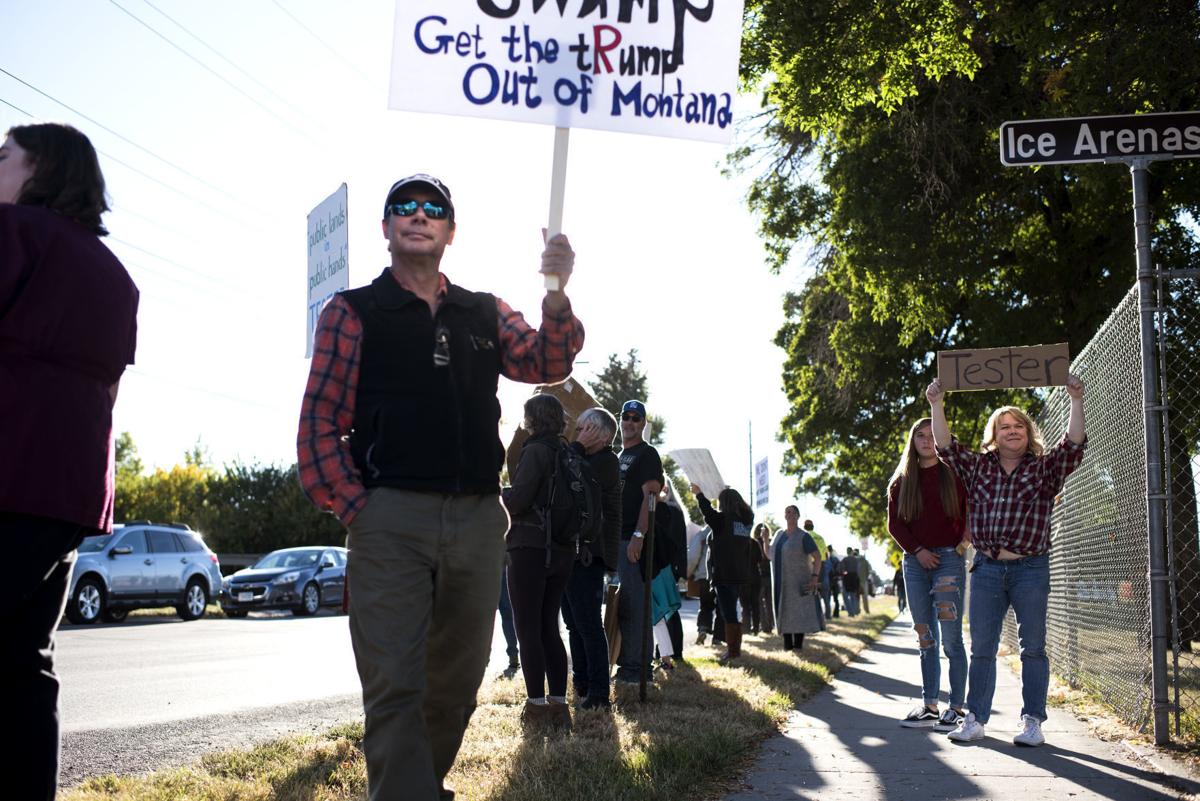 Protesters hold signs outside the Gallatin County Fairgrounds Tuesday afternoon ahead of a campaign visit by Donald Trump Jr. 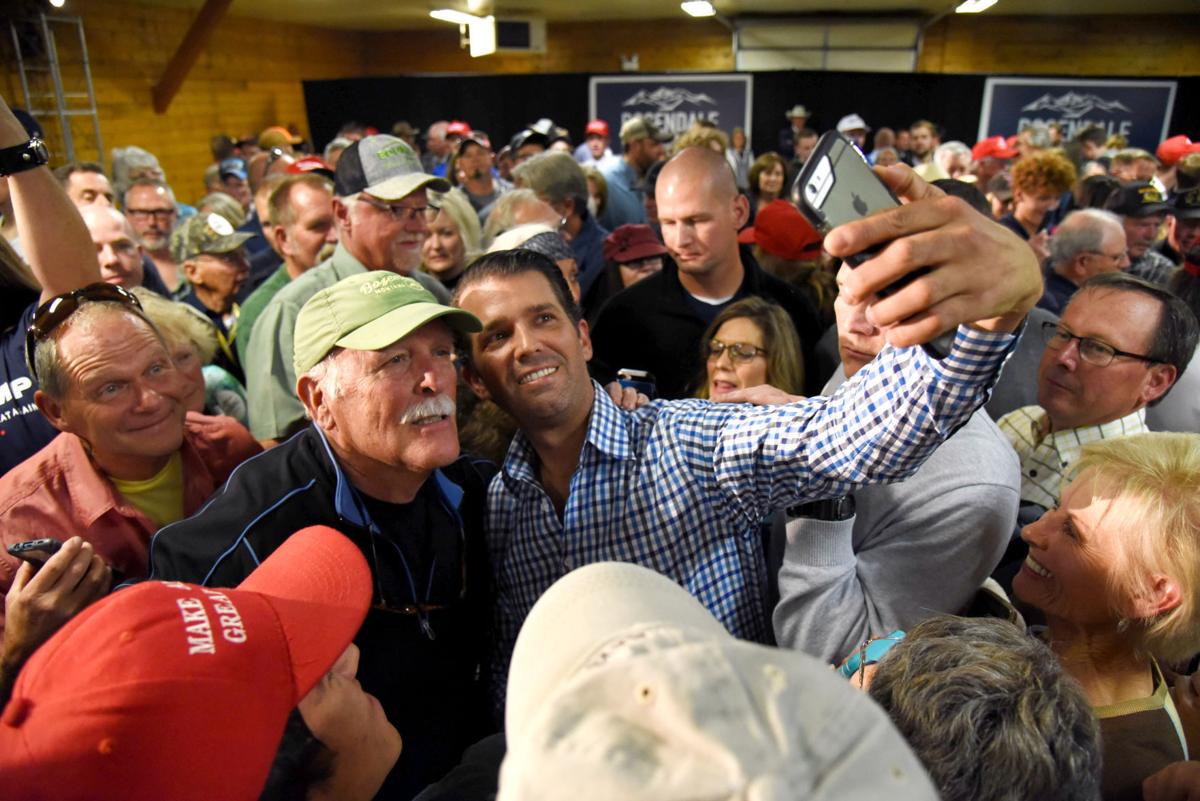 Donald Trump Jr. snaps a selfie with a rally-goer at the Gallatin County Fairgrounds Tuesday night. The president's son was in Bozeman to campaign for senate candidate Matt Rosendale.

BOZEMAN — Donald Trump Jr. told a crowd here Tuesday night that even though his father’s name isn’t on the ballot this November, everything the president stands for is at stake in this year’s midterm elections.

“You have to realize that Donald Trump is on the ticket in six weeks,” Trump Jr. told a crowd of several hundred gathered at the fairgrounds here for a rally supporting Republican U.S. Senate candidate Matt Rosendale.

“I don’t want to take a two-year hiatus where nothing gets done because obstructionist Democrats control (Congress) … it can all go away like that,” Trump Jr. said.

Rosendale, the state auditor, is running against two-term incumbent Democratic U.S. Sen. Jon Tester, a farmer from Big Sandy. Polling shows the race is expected to be very close and already millions in outside money have flooded the state, attacking and supporting both candidates.

Montana is one of 10 states President Donald Trump won in 2016 — here by 20 points — and Democratic senators are seeking re-election. Trump also set his sights on Tester after the senator made public accusations of improper behavior by his nominee to lead the U.S. Department of Veterans Affairs. Trump has held two rallies in Montana, one in Great Falls in July and another in Billings this month, and pundits say another could happen before November.

Tuesday night's event in Bozeman was again in a swing county where a candidate needs to do well to win this fall to win. In 2016, Trump lost Gallatin County by 444 votes and Democratic Gov. Steve Bullock took 56 percent of the vote.

Like much of this race, the rally focused as much on the president as it did on the two candidates running. Trump Jr. and Rosendale touted all the good things they said the president has done for Montana, including tax reform and appointing conservative Associate Justice Neil Gorsuch to the U.S. Supreme Court. And they emphasized that things Trump has long promised, like building a wall along the southern border with Mexico, would be in jeopardy if Republicans lost the majority in Congress.

“Matt Rosendale … will vote to continue these tax cuts, he will vote to build the wall, he’ll vote in a way that makes sense for his constituents, he’ll actually put the people of Montana ahead of people who are in this country illegally," Trump Jr. said. "… We need people in D.C. who get that, we need people who will fight with my father because he’s done a lot of great things, he’s done a lot of amazing things."

Trump Jr. also criticized Tester for not having a hunting license in Montana since 2012, the last year he was up for election.

“He pretends to be a hunter and an outdoorsman,” Trump Jr. said. “The only problem is the last time he bought a hunting license was the last time he was up for re-election. He doesn’t actually hunt, he just shows up for the photo op.”

Trump Jr. continued a common line Republicans have brought against Tester, trying to paint him as a far-left liberal.

“He’s not a moderate. He’s a radical liberal that dresses the part of conservative and that’s it. I’m the son of a billionaire in New York City and I’ve had more hunting licenses in Montana than your outdoorsy senator.”

Though Tester has parted from Trump on high-profile votes like the Gorsuch confirmation and the tax cut bill, he has voted in line with Trump's policies more than many in his party. The day Trump held a rally in Great Falls, Tester took out a full-page ad thanking the president for signing bills he's sponsored.

"Matt Rosendale is looking out for himself, bringing in another out-of-state developer on the same day his swampy behavior is yet again in the spotlight. … Montanans decided long ago that we don't like outsiders coming in and trying to influence our elections."

Meagher was referencing a story first reported by Montana Free Press on Tuesday that Rosendale dropped penalties against the company of a donor to his 2016 auditor's campaign, money that was earmarked for past campaign debt.

When Rosendale spoke to the crowd Tuesday night, he ran through his resume and history in the state, talking about moving to a ranch outside Glendive in 2002 and his credentials in agriculture. Democrats have criticized Rosendale for calling himself a rancher, pointing out he has no cattle or registered brand. Rosendale told the crowd he spent years fixing up his property and managing it as a ranch, and helped friends and neighbors with their cattle and crops.

As the nomination of Judge Brett Kavanaugh for the Supreme Court and allegations of sexual assault against Kavanaugh play out in Washington, D.C., Rosendale criticized Tester's past vote in support of Obama nominee Associate Justice Sonia Sotomayor and opposition to Gorsuch, who was nominated earlier this year by Trump.

“There’s nothing that is more important than the role a U.S. senator has in confirming or denying confirmations to the Supreme Court,” Rosedale said.

Rosendale again reiterated his support for Trump, which has been one of the largest themes of his campaign.

“President Trump isn’t on the ballot, but I want to tell you every single policy he stands for, all the work he’s been able to achieve to this point, is on the ballot,” Rosendale said.

Kimberly Guilfoyle, who left Fox News to join the pro-Trump America First Policies super PAC, also spoke Tuesday and played up partisan divides to rally the crowd and saying Republicans could make Democrats cry “over and over again” with the midterm elections.

More than 100 protesters gathered outside the fairgrounds, holding signs supporting Tester and critical of Trump and Rosendale. Some protesters were escorted out of the rally as well.

BIG SANDY — There was a rock stuck in the blade of the tandem disc and Jon Tester had a sledgehammer.

A mailer sent to about 90,000 Montanans at the end of September and start of October containing an absentee ballot application is causing conf…

Protesters stand outside the Gallatin County Fairgrounds Tuesday afternoon ahead of a campaign visit by Donald Trump Jr.

Protesters hold signs outside the Gallatin County Fairgrounds Tuesday afternoon ahead of a campaign visit by Donald Trump Jr.

Donald Trump Jr. snaps a selfie with a rally-goer at the Gallatin County Fairgrounds Tuesday night. The president's son was in Bozeman to campaign for senate candidate Matt Rosendale.