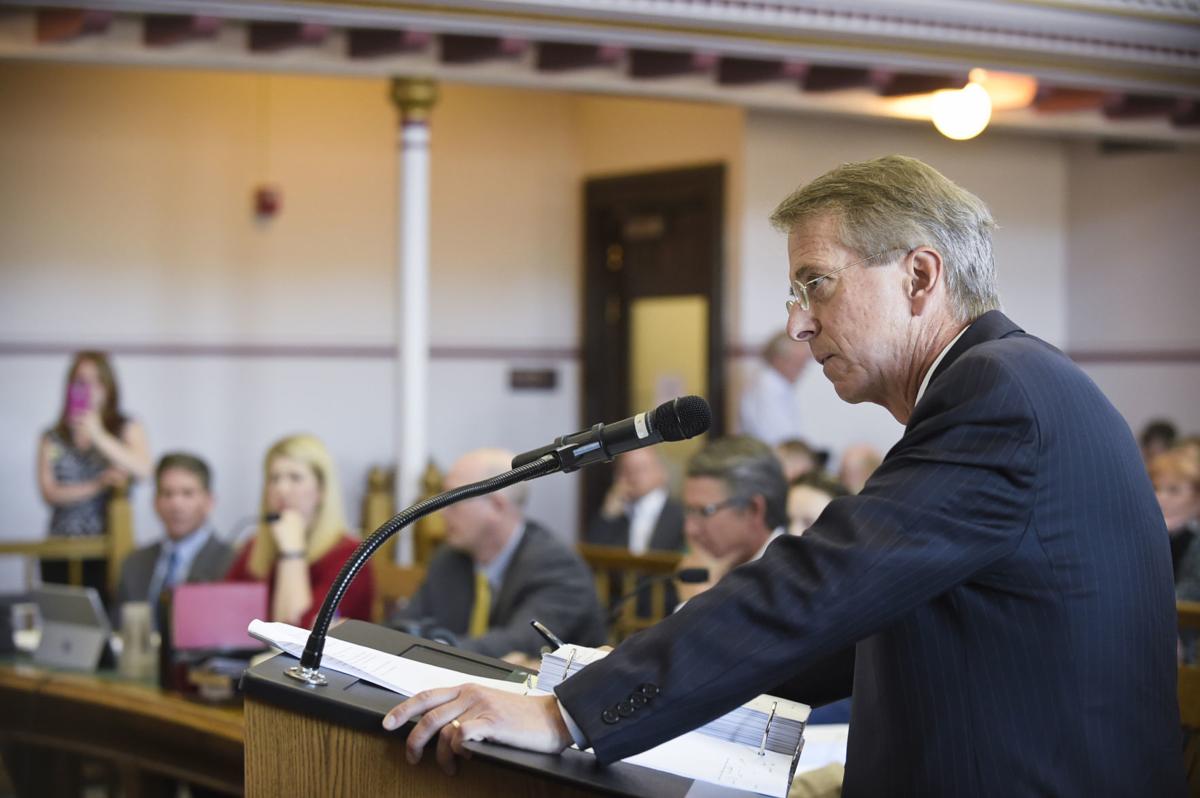 Kevin Hamilton, attorney for the Montana Democratic Party, questions a witness Tuesday afternoon during a hearing before Judge Kathy Seeley in the Lewis and Clark County courthouse. 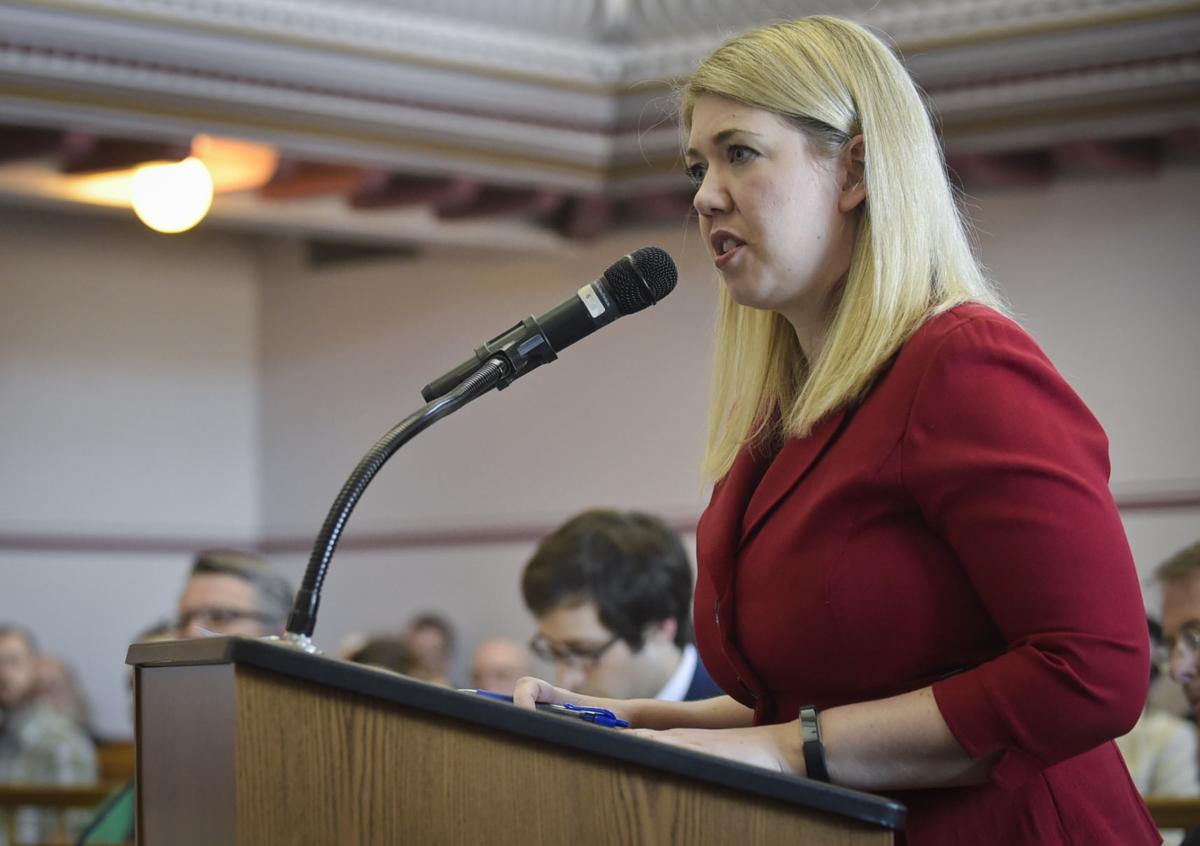 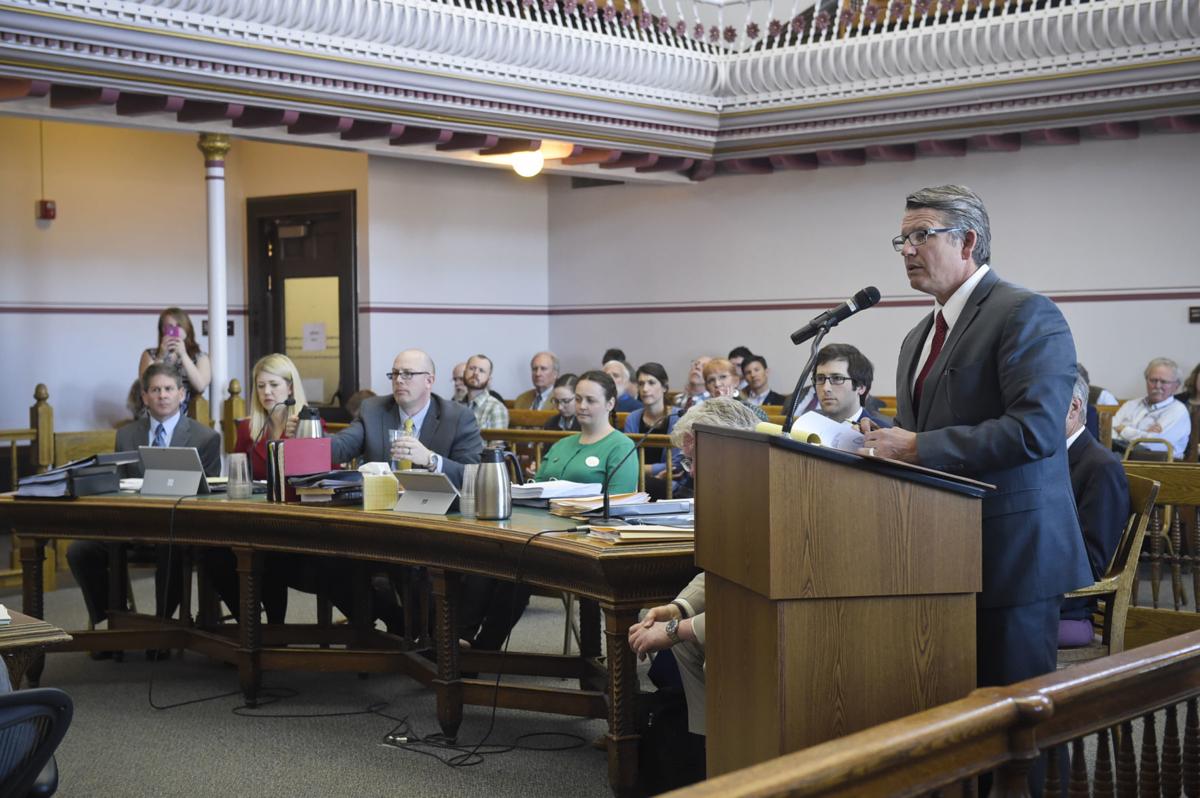 Quentin Rhoades, an attorney for the Montana Green Party, addresses the court  in Helena in April.

Lawyers representing the Montana Democratic Party told a Helena judge Tuesday why they think the Green Party should be removed from the ballot in upcoming elections, but a decision seems unlikely before the June 5 primary.

A hearing before Lewis and Clark County District Court Judge Kathy Seeley was continued to April 30 because a lawyer representing the Secretary of State's Office did not have a chance to make her arguments before the judge.

The Secretary of State is being sued by the Democratic Party, which claims the state incorrectly certified the Green Party for the ballot. The Montana Green Party, which is also named in the suit, will be able to call witnesses to testify when the hearing continues as well.

In the lawsuit, filed at the start of April, the Montana Democratic Party claims the Montana Green Party didn't gather enough valid signatures to qualify to get its candidates on the ballot this year and asked a judge for an injunction to get the Green Party kicked off ballots.

Some signatures certified by county clerks and Secretary of State are invalid, Democrats argue, because of issues like signatures that don't match what's on the voter's file.

The Green Party submitted signatures to counties at the last minute and was certified for the ballot on the last day possible, March 12. The same day,  several Green Party candidates filed paperwork to appear on the ballot.

While some candidates, such as U.S. Senate candidate Steve Kelly of Bozeman, have a long association with the Green Party, other candidates did not. That includes Kelly's primary opponent Tim Adams, who has been on the payroll of the Montana Republican Party in the past, as well as House District 85 candidate John Gibney of Hamilton, who was denounced by the Green Party for derogatory comments on immigrants.

The late addition of the liberal Green Party could pull votes away from Democratic candidates, which could be important in tight races such as that faced by incumbent U.S. Sen. Jon Tester, a Democrat running for his third term in what's expected to be a closely contested race.

Ballots for the June 5 primary have already been printed with Green Party candidates included and ballots for military members serving overseas have already been sent. By the second week of May, absentee ballots should reach voters across the state.

Seeley on Tuesday said she didn't expect to make a decision about whether the Green Party will remain on the ballot before the primary vote.

"I don't see that deciding this before the primary really addresses an issue with the ballots that have gone out," Seeley said.

Kevin Hamilton, the attorney for the Montana Democratic Party, said he didn't see a problem with a decision coming after the primary.

"What really matters here is the general election and that's in November," Hamilton said.

Stapleton and the Secretary of State's office are being represented by Emily Jones, a Billings lawyer.

The Billings Gazette has previously reported that Jones was sanctioned by Seeley in 2017. The sanction came after Seeley found Jones interfered with the Commissioner of Political Practices' attempt to gather evidence in a case and directly contacted witnesses, cautioning them against sharing information about her husband's political consulting firm. Jones' husband is Jake Eaton, who runs 47 North Communications.

The Montana Green Party is represented by Quentin Rhoades, who in the past has represented the conservative group American Tradition Partnership, as well as former state legislator Republican Art Wittich, who was found guilty by a jury of accepting illegal contributions in his 2010 senate race.

The Montana Democratic Party has also filed a compliant with the state Commissioner of Political Practices, arguing that a Nevada political consulting firm called Advanced Micro Targeting paid people to gather signatures but did not report its activities in finance reports. The commissioner has accepted the complaint and is in the process of investigating.

James Larson, former chairman of the party; Donald Judge, former executive secretary of the Montana AFL-CIO; and Jean Price, a former state legislator, have joined the Democrats in filing the lawsuit.

The conservative group Americans for Prosperity Montana is running $560,000 worth of television and digital ads critical of incumbent Democrat…

Though Montana shares a 545-mile long border with Canada, the question of what should be done on the U.S. southern border with Mexico is a big…

As the Montana Democratic Party heads to court to get the Montana Green Party off the ballot before this June's primary, county elections offi…

A political consulting firm may have engaged in unreported paid activity to help the Montana Green Party qualify for the ballot this year, acc…

Montana secretary of state: Democratic superdelegate is challenging the Green Party's qualification for the ballot

Green Party candidate for U.S. Senate was once a paid GOP operative

As the clock was running out for candidates to get their name on the ballot for what’s expected to be a hotly contested U.S. Senate race, Tim …

On the last day for candidates to get their name on the ballot for this year’s elections, a few dozen more people signed up to run for seats i…

Less than two weeks before primary election voting begins, Montana’s Republican candidates for U.S. Senate are getting a little prickly with one another.

US delays oil, gas sales in Montana after climate ruling

Executive director of Montana Board of Investments retiring

The executive director of the Montana Board of Investments is retiring in September.

Helena's city government is beginning an ambitious attempt to address the difficulties of increasing affordable housing.

GOP: Kicking Green Party off ballot will make it harder for Republicans to win legislative races

A lawsuit challenging the Green Party's qualification for the 2018 ballot is scheduled to continue Monday before District Judge Kathy Seeley in Helena.

A federal judge decided she won't hear a case by Montana Democrats that seeks to remove the Green Party from the 2018 election ballot.

Nearly 100,000 people already have voted in Montana's primary election. If turnout this year is similar to the last midterm in 2014, that coul…

The Montana Supreme Court has upheld a state judge's decision to remove Montana Green Party candidates from the November ballot.

Kevin Hamilton, attorney for the Montana Democratic Party, questions a witness Tuesday afternoon during a hearing before Judge Kathy Seeley in the Lewis and Clark County courthouse.

Quentin Rhoades, an attorney for the Montana Green Party, addresses the court  in Helena in April.