Commissioner Jeff Mangan ruled Cottonwood Environmental Law Center did not file declaratory paperwork or campaign finance  reports with his office in the legally required timeframe. Mangan referred the parties to the Lewis and Clark County Attorney’s Office for potential prosecution, but noted the likely outcome is a negotiated civil fine. 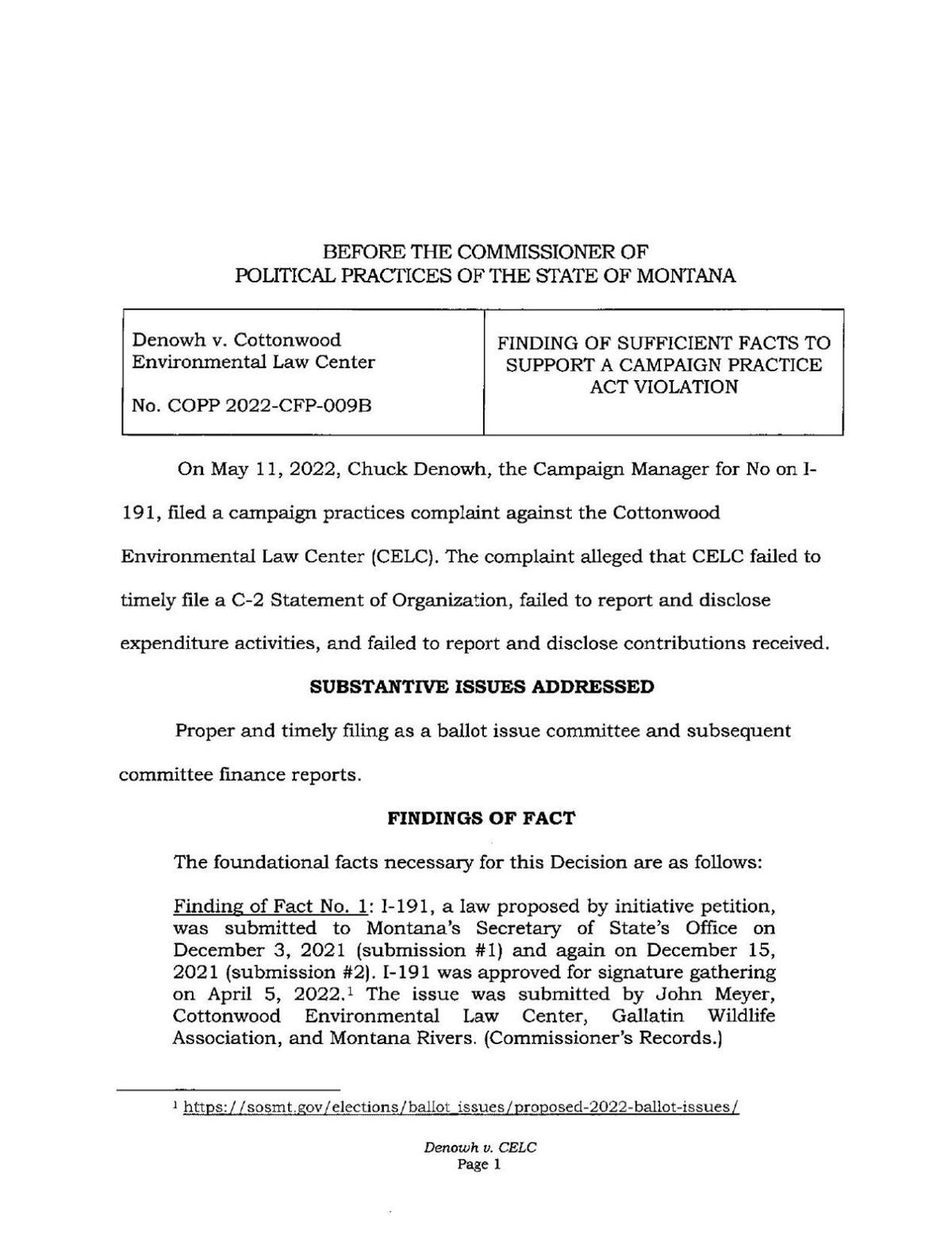 Initiative 191, brought by Cottonwood, the Gallatin Wildlife Association and Montana Rivers, sought to add new environmental protections to stretches of the Gallatin and Madison rivers by declaring them "outstanding resource waters." The designation would prohibit temporary pollution sources.

The measure did not receive the required signatures to appear on the ballot.

The measure became embroiled in a legal fight after Attorney General Austin Knudsen on Jan. 28 rejected it, finding in a Jan. 28 legal memo that I-191 constituted a taking of private property under the U.S. and state constitutions without providing compensation to affected property owners. That decision was overruled by the Montana Supreme Court in March, but organizers later abandoned the signature gathering effort, saying the delays cost too much time.

Political consultant Chuck Denowh, serving as campaign manager for the opposition group on I-191, filed a political practices complaint in May. Denowh alleged a “complete failure” of I-191 proponents to file campaign finance reports with Mangan, but provided several examples of Cottonwood advocating for and soliciting funds for the effort through a website, videos and email blasts. The complaint further alleged that the materials did not feature legally required “paid for by” disclaimers.

“Montanans have a right to know what interests and contributors are funding those efforts, how much money is being dumped into our political system, and what other tactics are being utilized,” the complaint states.

In an earlier ruling Mangan substantiated the “paid for by” attribution violations but dismissed them after Cottonwood took “corrective measures,” by removing the unattributed materials. That left the reporting accusations to be decided.

In his latest ruling, Mangan found that Cottonwood’s activity qualified the firm as an incidental committee, meaning it was not initially formed to advocate for the ballot measure but had expended funds on its behalf.

“While not originally organized to engage in electoral politics, CELC became a political committee by financing election communications supporting I-191 and seeking its placement before Montana voters in an election,” the decision states. “Once I-191 became a ballot issue on April 5, 2022, within 5 days CELC was required to file as a political committee and report its financial activity in support of the ballot measure.”

Cottonwood did not file as an incidental committee until June 29, reporting about $9,500 of in-kind donations in a separate filing. A ballot issue committee called I-191 also filed a statement of organization last month.

Mangan found that the law firm and ballot committee missed two mandatory reporting periods. He also found an error in the reporting, saying a $200 expenditure was not reported. The decision further points to the solicitations for contributions, noting that no financial contributions were reported.

“The Commissioner hereby issues a ‘sufficient evidence’ Finding and Decision justifying a civil fine or civil prosecution of Cottonwood Environmental Law Center, [Advocates for] I-191,” the decision states.

"Montana has strict campaign finance transparency requirements to ensure outside big money efforts can't manipulate voters,” he said in a statement. “We are pleased the Commissioner of Political Practices is holding this extreme environmental law firm accountable for trying to skirt Montana's anti-dark money laws. Despite this group's failure to disclose required information, Montanans saw through it and flatly rejected their effort to harm agriculture, river access, and ongoing conservation efforts."

Cottonwood Executive Director John Meyer said in an email Monday that the organization had moved to come into compliance once it received notice of the complaint.

“Cottonwood is a small grassroots organization that believes protecting the water quality in the Gallatin and Madison rivers is more important than vacation homes and golf courses in Big Sky,” he wrote. “We spent less than $10,000 on Citizen Initiative 191. We were unaware that made us a Political Action Committee, but when we received notice of the complaint, we immediately provided the COPP with a report detailing our expenditures to ensure transparency.”

Meyer noted that supporters of the initiative were outspent by opponents by about $110,000 and contributions came in from developers and business interests.

Cottonwood has been involved with other efforts to protect water quality including a lawsuit against the Yellowstone Club and Big Sky over plans to make snow using treated wastewater. The lawsuit alleges the state failed to analyze potential pharmaceutical pollution from melting snow, Meyer said.

Under their proposal, $750 million should be allocated for programs and services with $250 million would be refunded as targeted property tax relief.

The commission was established as part of the 2021 Bipartisan Infrastructure Law.

A new habitat leasing program saw a mix of praise and concern from state lawmakers this week with questions on mineral rights, funding and politics. 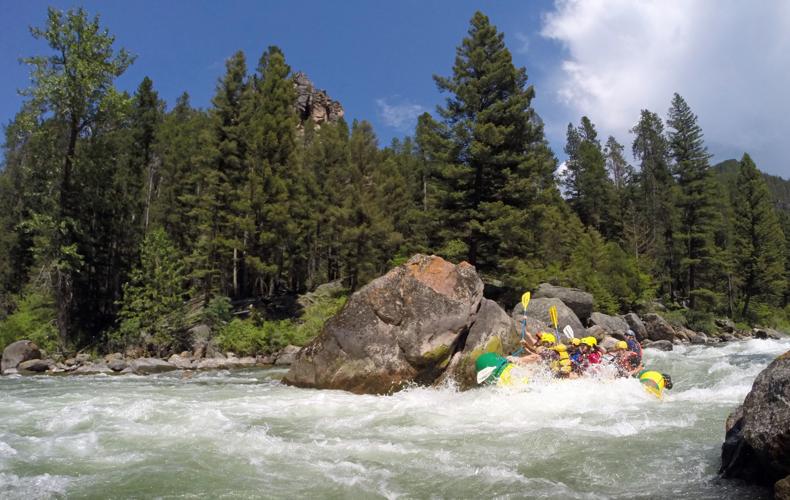 Outfitted water sports like rafting and kayaking on the Gallatin River contribute to the recreation economy generated in Montana.