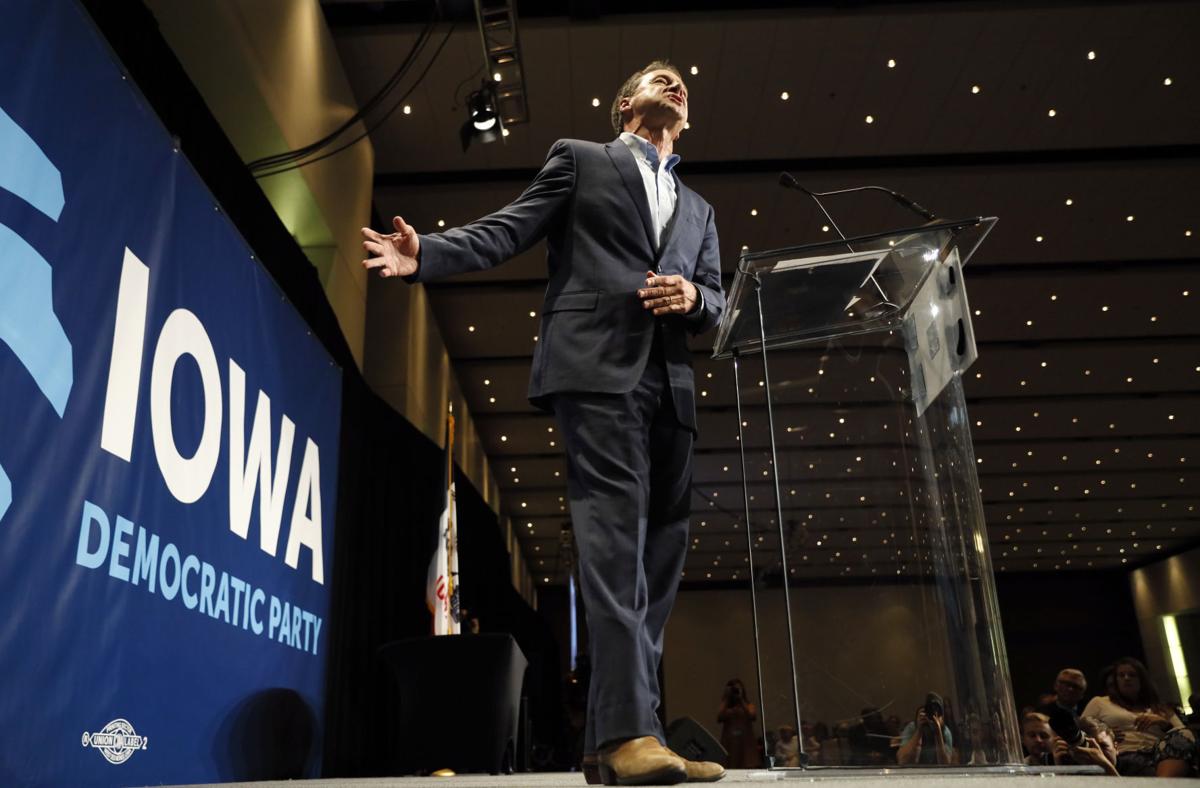 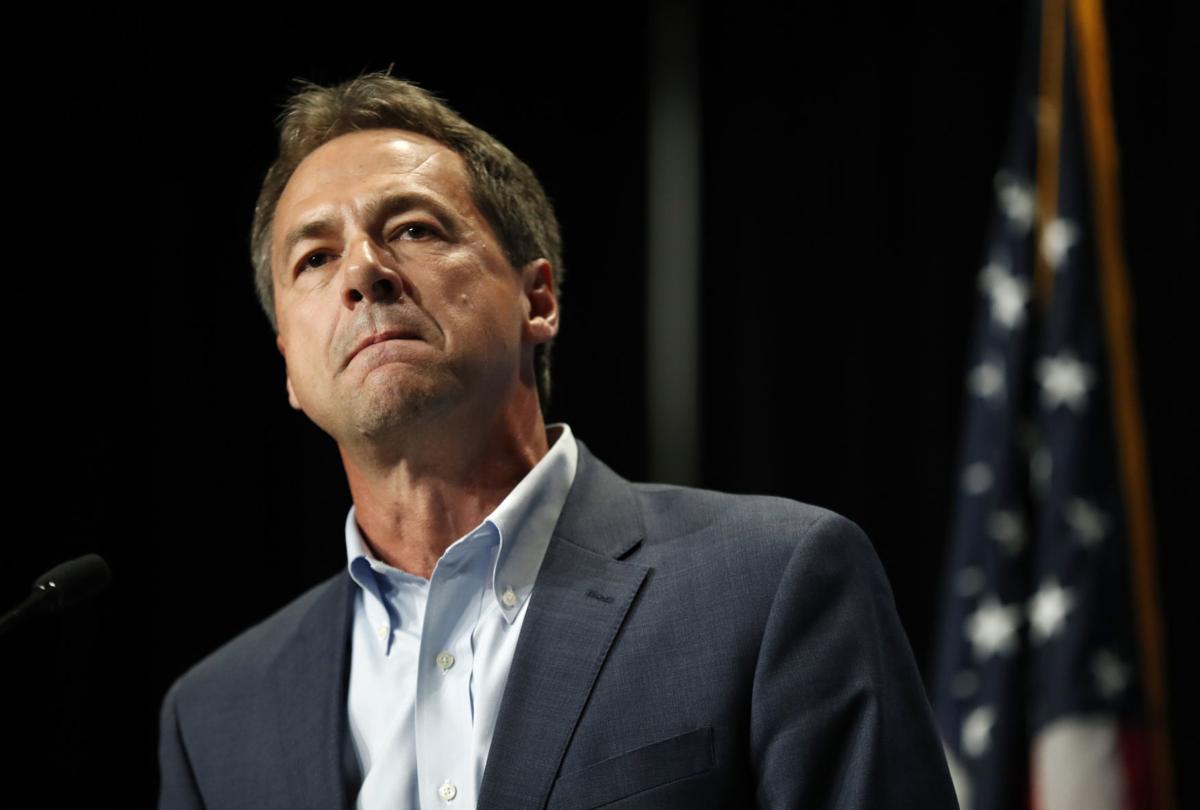 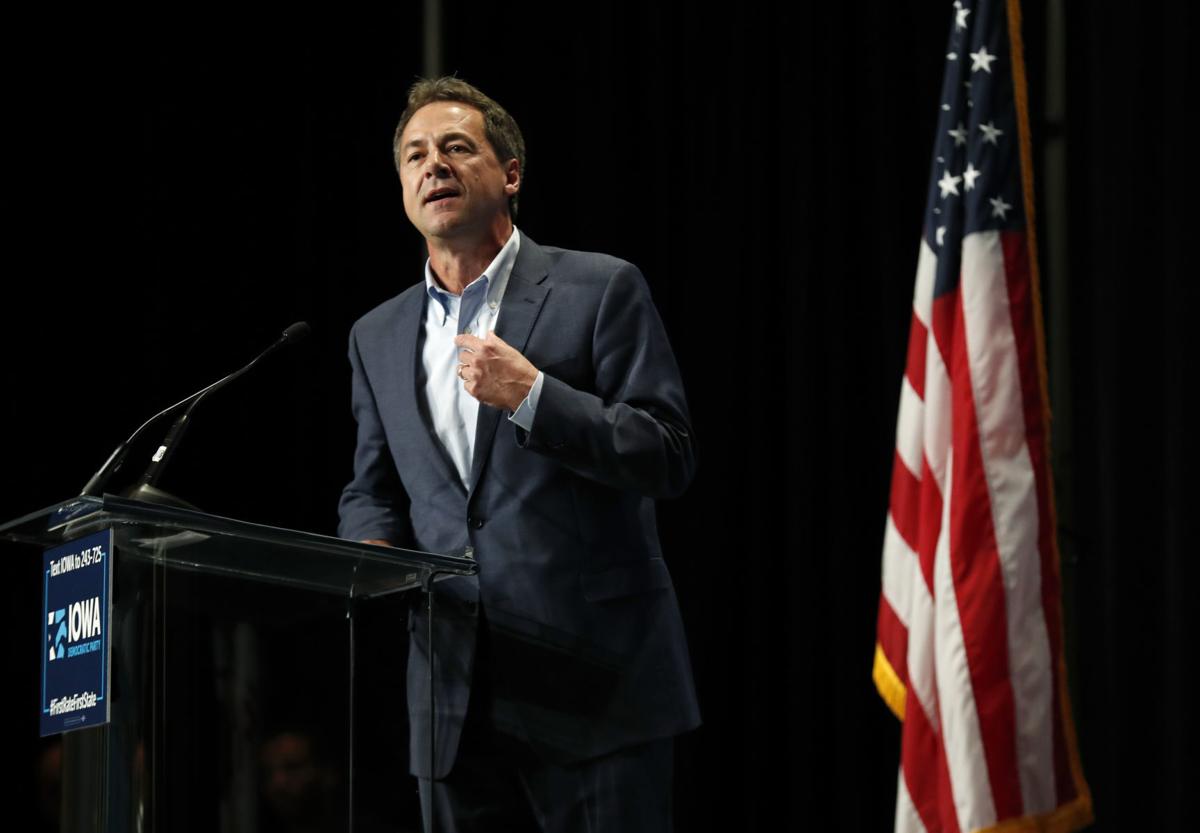 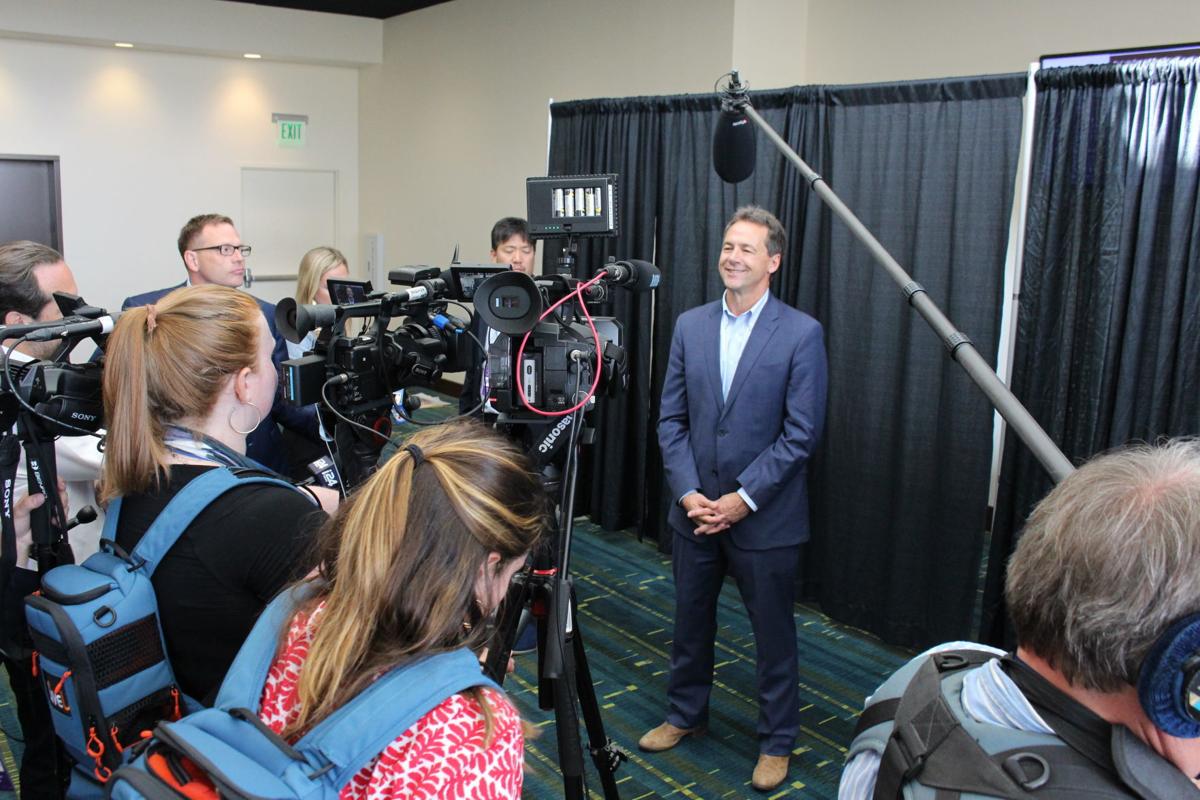 Bullocks speaks with reporters at the press "gaggle" after his 5-minute speaking slot during the Iowa Democratic Party's Hall of Fame Celebration, Sunday, June 9, 2019, in Cedar Rapids, Iowa. 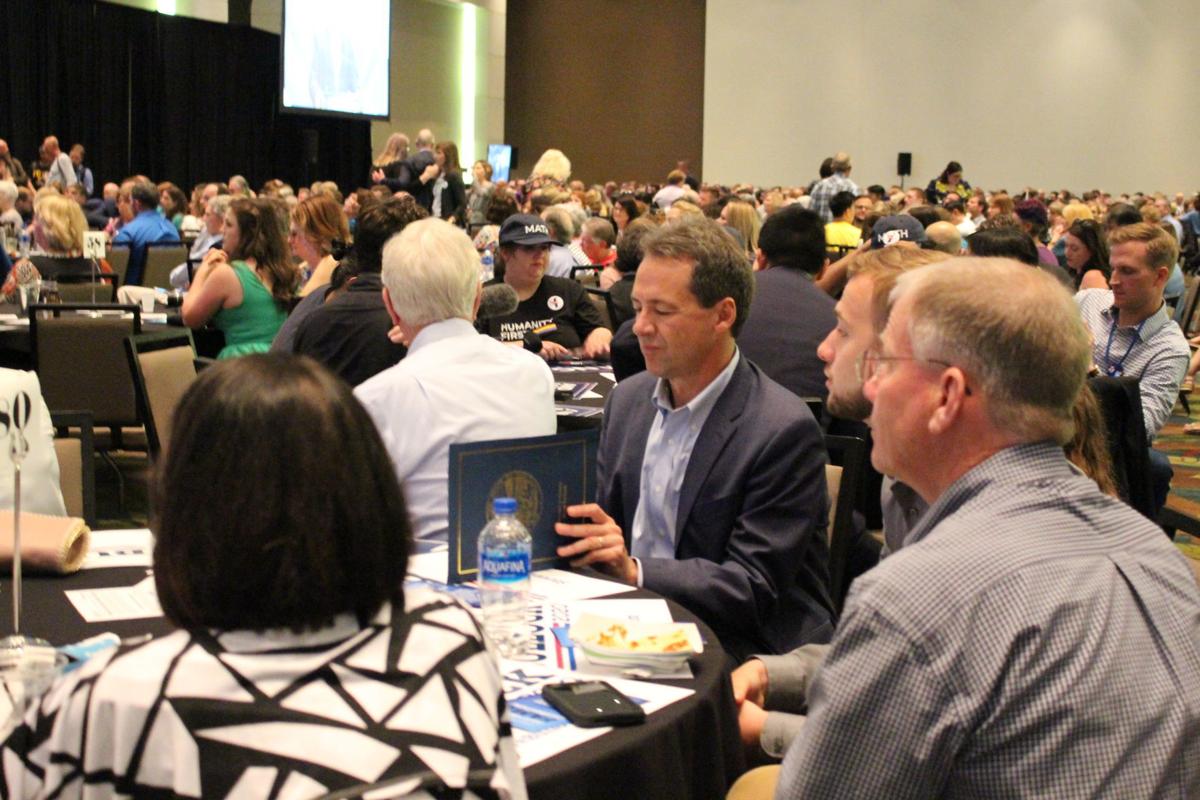 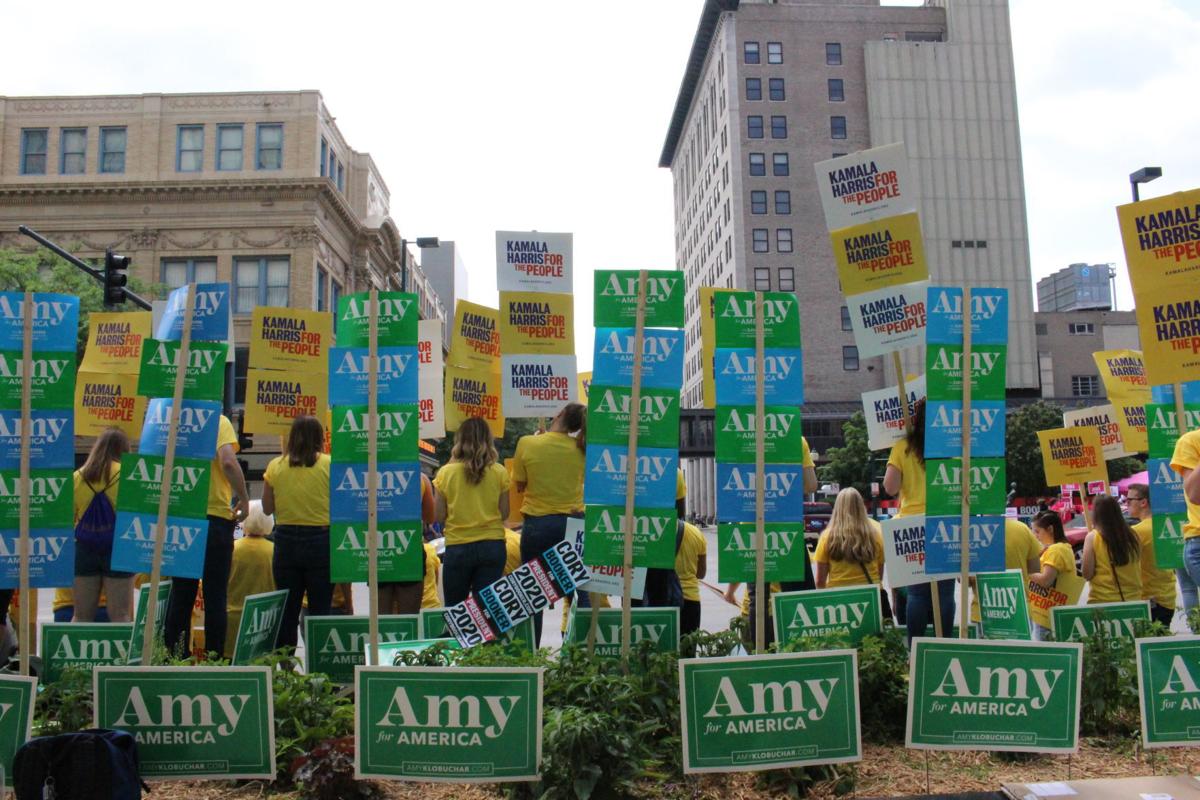 Several hundred people gathered outside the DoubleTree by Hilton in downtown Cedar Rapids, Iowa, in advance of the Iowa Democratic Party's Hall of Fame celebration, where 19 of the Democrats seeking their party's presidential bid will speak. 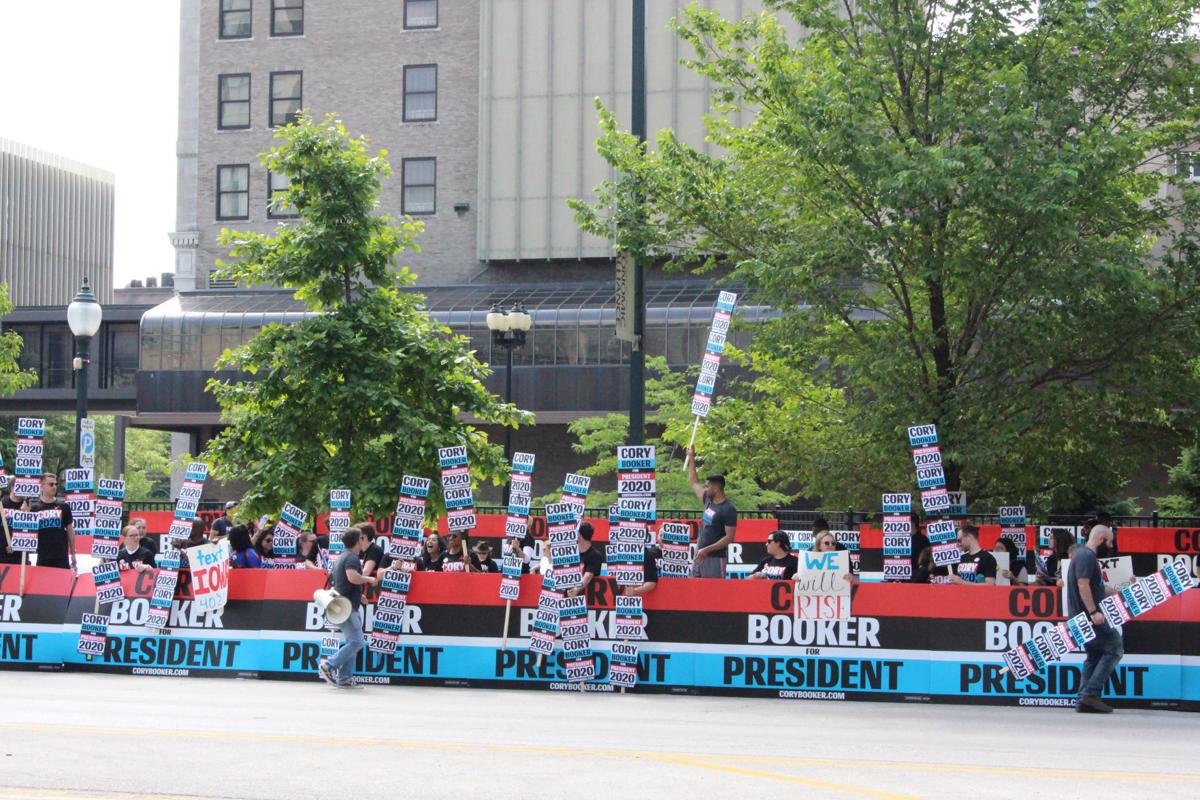 Supporters of Sen. Cory Booker, a Democrat from New Jersey, gather outside the DoubleTree by Hilton hotel in downtown Cedar Rapids, Iowa, in advance of the Iowa Hall of Fame celebration. 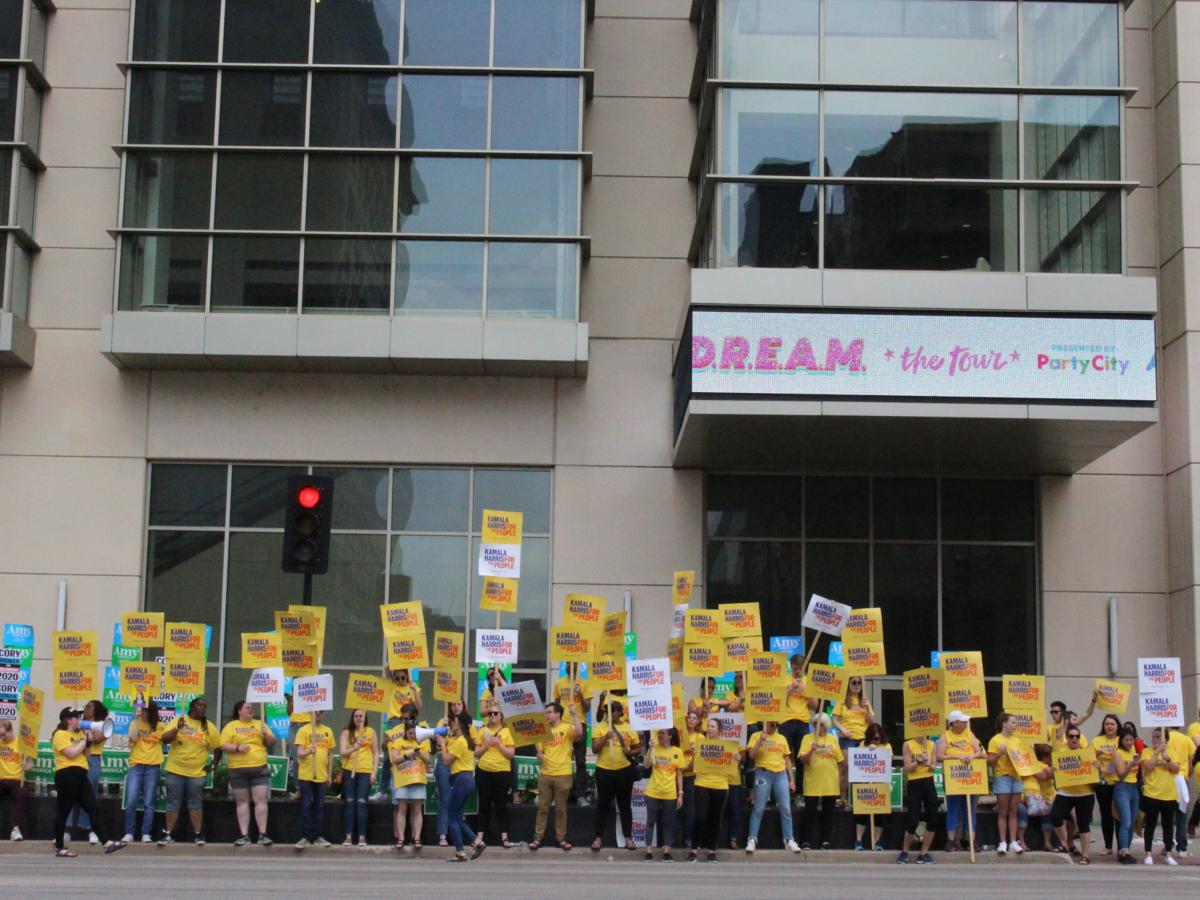 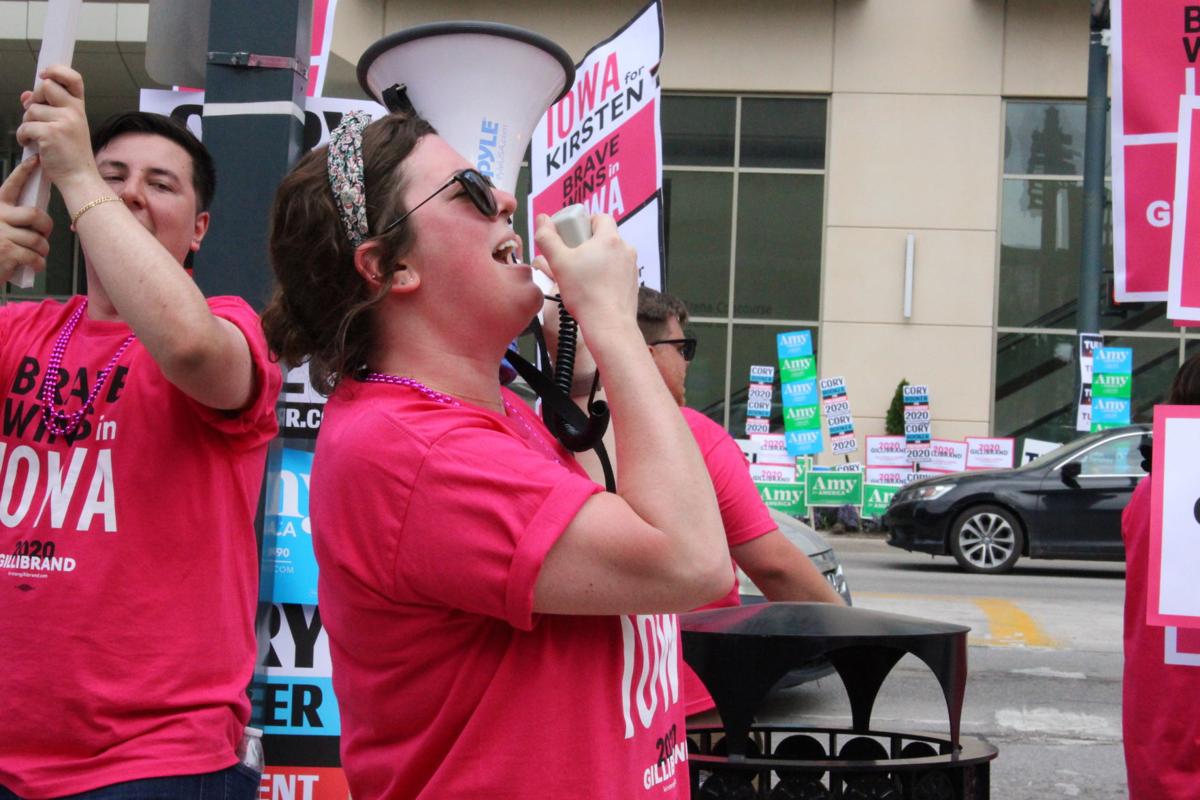 People rally in support of New York U.S. Sen. Kirsten Gillibrand, a Democrat, outside the DoubleTree by Hilton in downtown Cedar Rapids, Iowa, on Sunday before the Iowa Hall of Fame celebration. 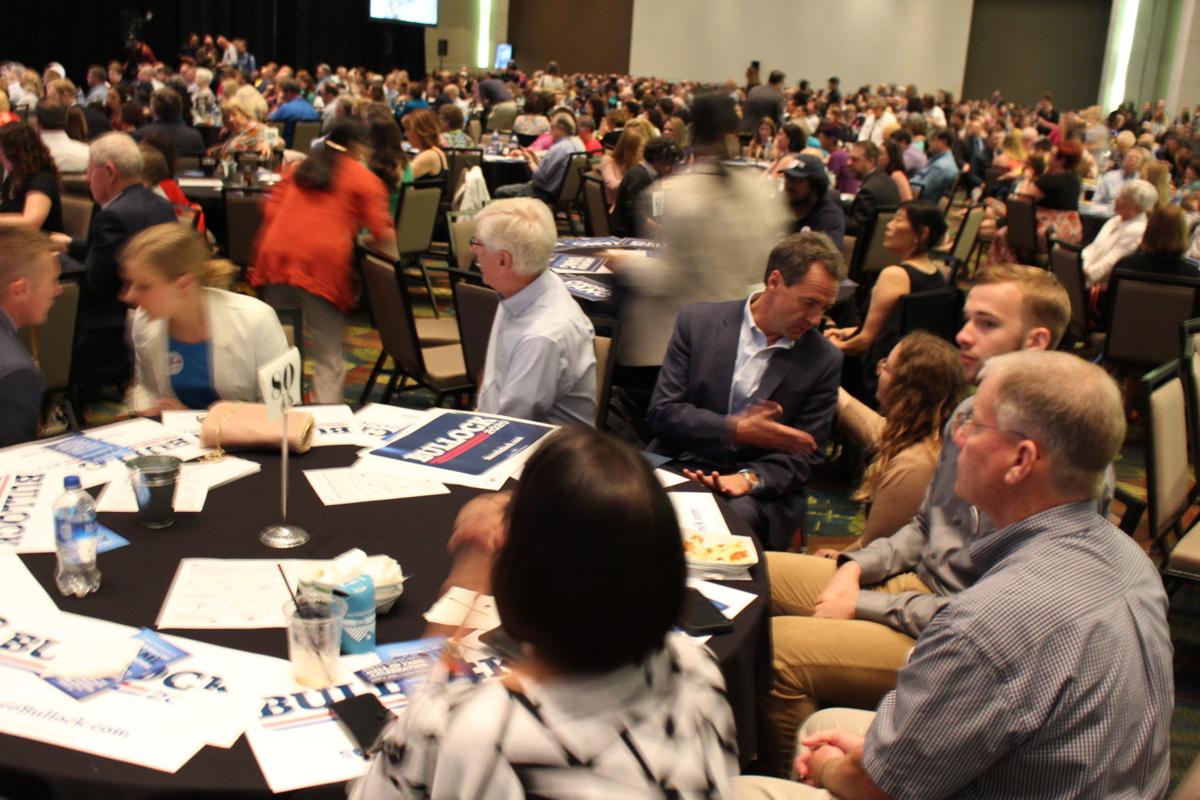 Montana Gov. Steve Bullock sits at a table of supporters at the Iowa Democratic Party Hall of Fame celebration in Cedar Rapids. Bullock is one of 19 people seeking the party's presidential primary who will speak at the Sunday event.

CEDAR RAPIDS, Iowa — In a passionate and energetic 5-minute appeal to the movers and shakers of the Iowa Democratic Party, Montana Gov. Steve Bullock on Sunday played up his rural credentials and his resume fighting dark money in politics as the reasons why he should be his party's choice for president in 2020.

Bullock spoke in front of about 1,500 people at the Iowa Democratic Party's Hall of Fame celebration, the unofficial kickoff of caucus season in the state.

Nineteen other candidates in the Democratic president primary, from a field of more than 20, attended the event. Bullock has a long way to go if he wants to reach the top tier of that group, but Iowa political observers Sunday said he can't be ruled out.

Wearing cowboy boots and coming on stage to John Mellencamp's "Small Town," Bullock tried to sell the crowd on his rural state appeal, one of the most distinguishing factors between him and top names names in the race, as well as the lower-tier candidates.

"The path to victory isn't just through the coasts. It includes places we lost last election," Bullock said. "This is about the White House and the statehouse. And if we can’t fire up Democrats and win back the places that we lost in '16, we may as well fold up that great big tent right now."

Republican President Donald Trump loomed large in many of the stump speeches, and Bullock tried to sway people toward why he was best suited to defeat the president in 2020.

"I was the only Democrat in the country to win a statewide reelect in a state where Trump won. He took Montana by 20 points (in 2016), I won by 4," Bullock said.

Several other candidates discussed the role of money in politics, particularly when it's spent by corporations and the ultra-wealthy, but Bullock made it his signature issue, leaving things like climate change and education untouched Sunday.

"In this post-Citizens United world where money equals speech, corporations have the same right as people. Until we address the fact that the rules are now written for those who have the biggest checkbooks, we’re not going to solve any of the problems you’ve heard about in the last 17 speeches," Bullock said. " … This is the fight of our time. It's been the fight of my career."

As governor, Bullock oversaw the passage of the Disclose Act, which in part requires any groups, regardless of their tax status, to disclose their donors when spending money within 60 days of an election and targeting a candidate.

The law passed in the 2015 state Legislature after Democrats worked with Republicans who had also been targeted by attack ads from undisclosed parties. As Montana's attorney general, Bullock also unsuccessfully challenged Citizens United, taking the case all the way to the U.S. Supreme Court.

Lee Banville, a political analyst and professor at the University of Montana, said focusing on dark money instead of health care or climate change makes sense for Bullock because he can point to very specific actions he's taken, both successful and not.

“He’s real on this issue. It’s not just talking points for a 5-minute speech in Iowa. It really is a thing he has committed numerous resources and time to try to defend in Montana and, frankly, it has helped him here,” Banville said. “He has a documented record of doing this stuff, both trying and failing and then succeeding through legislation."

Kevin Techau, the former U.S. Attorney for the Northern District of Iowa, was one of the supporters at Bullock's table during the event Sunday. Opposition to dark money was one of his main reasons for backing Bullock.

Techau said he isn't concerned about Bullock's lack of name recognition or traction so far in the crowded primary. In the highly watched Iowa Poll, released Saturday, Bullock clocked less than 1%. The poll is from the Des Moines Register, CNN and Mediacom.

That news comes days after the Bullock campaign cried foul about a change the Democratic National Committee made to the criteria to participate in the party primary debates June 26-27. A poll Bullock previously used to qualify no longer counts, and his campaign is aggressively seeking donors to hit the 65,000 threshold, another way to get on the stage.

Bullock said he was penalized for entering the race late, waiting to announce May 14 after the Montana Legislature wrapped up the work of its biennial session. He didn't waste time Sunday taking a shot at the DNC.

"Thanks for not changing the rules this week for who gets to be on this stage," Bullock said at the start of his address. Speaking to reporters later, the governor acknowledged it's unlikely he will qualify for the debates by the Wednesday deadline.

That makes events like Sunday's and an upcoming swing through the state, branded the "Fighting for Rural Iowa" tour, all the more important in Bullock's ability to make a name for himself.

"He seems like he's an up-and-comer, and he had to stay back and take care of his business as governor," Techau said. "I think he'll have his moment."

Matt Paul, a political strategist who was the director for former Secretary of State Hillary Clinton's 2016 presidential campaign in Iowa, said Sunday there's still a path for Bullock to rise to the top in Iowa's Democratic presidential primary caucus next February.

Before the event, hundreds of people held signs, yelled and cheered for hours outside the downtown convention center, rallying for the major candidates — U.S. Sens. Elizabeth Warren, of Massachusetts; Cory Booker, of New Jersey; Kamala Harris, of California; Kirsten Gillibrand, of New York; and more.

Vermont Sen. Bernie Sanders marched with striking McDonald's workers to the event location. Front-runner former Vice President Joe Biden is not attending but coming to Iowa later in the week.

Bullock's campaign did not have a presence along with the front-runners. What he does have is the endorsement of Iowa Attorney General Tom Miller, something local Democratic leaders said could carry him far. Miller endorsed former President Barack Obama in 2008. Bullock also got the support Sunday from another politician much closer to home, Democratic U.S. Sen. Jon Tester of Montana.

"There is a path (for Bullock in the caucus)," Miller said. "… He's been out here. … He just has to build on that and do more and more, more visits. And he's got a good staff and it's getting bigger. There's that path."

The website Politico reported Thursday morning that Gov. Steve Bullock has not yet secured a position on the stage.

Bullock presidential bid came among pleas to run for Senate

Before Montana Gov. Steve Bullock made his bid for president official at the start of May, each time he hinted at a campaign on social media i…

The first Democratic candidate for Montana governor has filed her paperwork with state regulators.

OUTSIDE PACIFIC JUNCTION, Iowa — As the crow flies, or — perhaps more relevant — as the water rises, the Missouri River is 3 miles from Fran P…

Bullock runs on winning in a GOP state

SIOUX CITY, Iowa — In a low-ceilinged and even lower-lit bar and pizza joint on a humid early summer night, the governor of Montana last week …

One of the hallmark messages of Montana Gov. Steve Bullock's campaign for the Democratic presidential nomination is the subject of a lawsuit f…

Bullocks speaks with reporters at the press "gaggle" after his 5-minute speaking slot during the Iowa Democratic Party's Hall of Fame Celebration, Sunday, June 9, 2019, in Cedar Rapids, Iowa.

Several hundred people gathered outside the DoubleTree by Hilton in downtown Cedar Rapids, Iowa, in advance of the Iowa Democratic Party's Hall of Fame celebration, where 19 of the Democrats seeking their party's presidential bid will speak.

Supporters of Sen. Cory Booker, a Democrat from New Jersey, gather outside the DoubleTree by Hilton hotel in downtown Cedar Rapids, Iowa, in advance of the Iowa Hall of Fame celebration.

People rally in support of New York U.S. Sen. Kirsten Gillibrand, a Democrat, outside the DoubleTree by Hilton in downtown Cedar Rapids, Iowa, on Sunday before the Iowa Hall of Fame celebration.

Montana Gov. Steve Bullock sits at a table of supporters at the Iowa Democratic Party Hall of Fame celebration in Cedar Rapids. Bullock is one of 19 people seeking the party's presidential primary who will speak at the Sunday event.