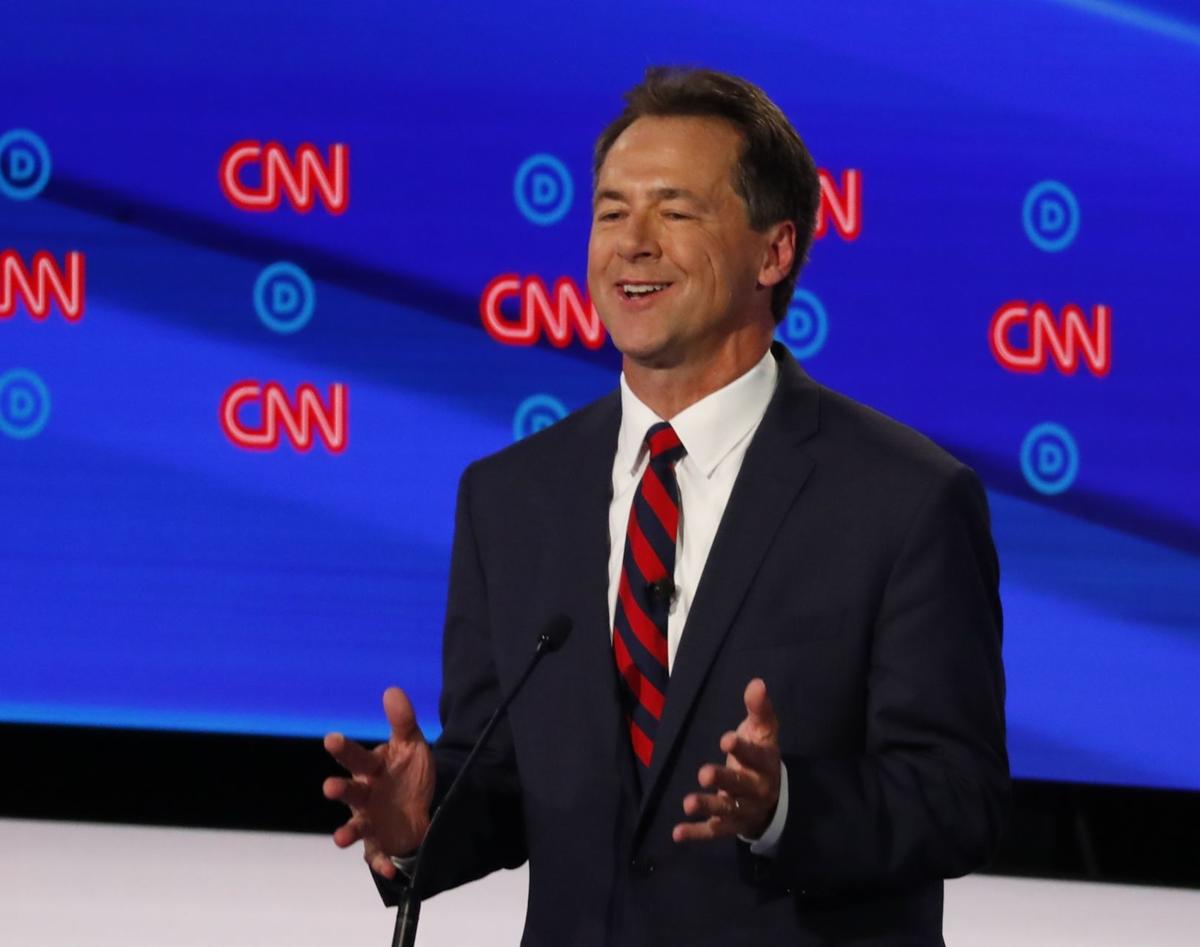 Montana Gov. Steve Bullock participates in the first of two Democratic presidential primary debates hosted by CNN on Tuesday in the Fox Theatre in Detroit. 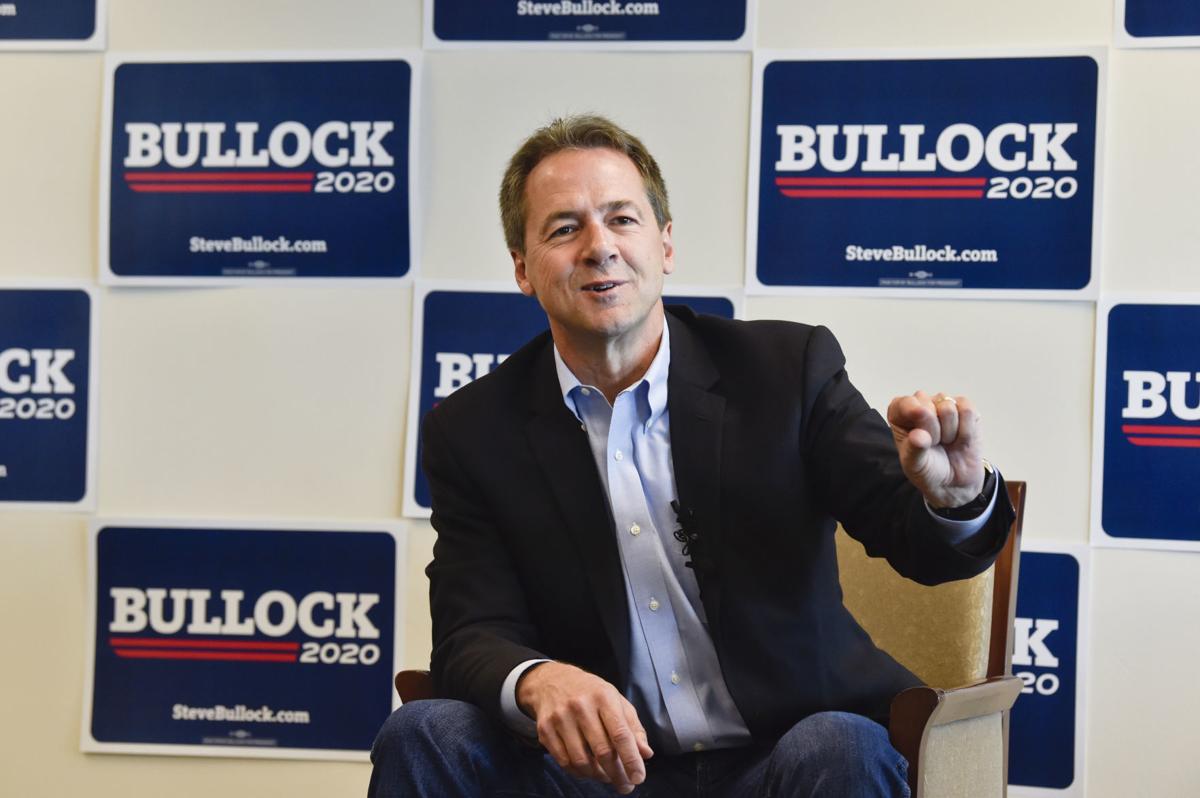 Gov. Steve Bullock, Democratic presidential candidate, holds a roundtable discussion with members of the local media in May at his campaign headquarters in Helena.

Montana Gov. Steve Bullock sought to stand out among the crowd and introduce himself to a national audience as he participated Tuesday in his first and what he hopes won’t be his last Democratic presidential primary debate.

Bullock was able to play his "I won in a Trump state" card, one of the key messages of his campaign, and turned a question on gun violence into an answer on another of his hallmark issues — battling against the influence of dark money in politics.

As 10 of the candidates seeking to be their party's nominee for president battled onstage over how far to the left or center the eventual nominee should fall on the Democratic spectrum, Bullock staked out the moderate ground. The second round of debates hosted by the Democratic National Committee, with 10 more candidates, is Wednesday night, hosted by CNN.

Bullock didn't shy away from squaring off against better-known front-runners like U.S. Sens. Bernie Sanders, of Vermont, and Elizabeth Warren, of Massachusetts.

People "can't wait for a revolution, their problems are here and now," Bullock said, taking aim at those in the field who have called for policies like Medicare for All and free college tuition. "I'm a progressive, emphasis on progress."

How to address the cost of and difficulty in accessing health care has divided Democrats, with some candidates favoring a single-payer system, also called Medicare for All. Others have said that's a too-extreme approach and that private insurance should remain an option. Fielding a question from moderator Jake Tapper on his stance, Bullock responded with a personal story about his now 12-year-old son Cameron, who was in Detroit for the debate. Cameron had a heart attack shortly after birth and needed emergency care in Salt Lake City, which the family's insurance through an employer covered, Bullock said.

"I won't take away quality heath care for individuals," Bullock said, classifying Medicare for All as another example of "wish-list economics," a phrase he returned to during the night when describing the policies of those who hold a farther-left view than his.

Over questions about the feasibility of the Green New Deal proposed in Congress to address climate change, Bullock and Sanders traded swipes over how to protect those employed in the production of fossil fuels. At Sanders telling Bullock — while calling him "Steve" — that the senator is one of the champions of labor in the U.S. Senate, Bullock was sharp in his response.

"Bernie, I was a union-side labor lawyer. I fought day after day and I know we set this up as a false choice all too often. Are we actually going to address climate change ... or are we going to give people a better shot at a better life? You can do both, but let's actually have the scientist drive this. Let's not just talk about plans that are written for press releases that will go nowhere else if we can't get a Republican to acknowledge that the climate is changing."

Again staking out a moderate position on decriminalizing border crossings and providing health care for undocumented immigrants, Bullock went back and forth with Warren while both candidates accused each other of letting Trump sow division on immigration.

"A sane immigration system needs a sane leader, and we can do that without decriminalizing (or) providing health care for everyone," Bullock said.

Bullock was asked by moderator Don Lemon how he could be trusted on addressing gun violence when just a year ago he changed his position to support universal background checks. Bullock again got personal, sharing the story of his nephew who was shot and killed 25 years ago at a Butte elementary school. He then shifted his answer to his trademark issue, the negative role of dark money in politics.

"It's not just gun violence, it's when we talk about climate, when we talk about prescription drug costs, Washington, D.C., is captured by dark money, the Koch brothers and others. That's been the fight of my career," Bullock said.

Candidates were also asked about polling showing Democrats want a nominee who can beat Trump more than one who speaks to any specific policy, playing into Bullock's message that he was able to win in a state Trump won in 2016 by capturing some of the president's voters. Through the campaign, Bullock has tried to classify Montana as a "Trump state," playing up the Republican-dominated Legislature to an an audience that doesn't study the nuance of Montana politics. Though Trump did win the state by a wide margin, Montana will have had a Democrat as governor for 16 years by the time Bullock leaves office and Democratic U.S. Sen. Jon Tester just won his third term.

"I do know that we have to win back some of those places we lost and get those Trump voters back if we're ever going to win," Bullock said.

Lee Banville, a political analyst and professor at the University of Montana, said before the debate Bullock needed a big night to keep his campaign churning.

"Those eight to 10 minutes he's answering questions tonight, that's going to set a lot of decisions for his campaign and him as a national figure for at least the next five to 10 years," Banville said.

But because Bullock missed the cut for the first round of debates, due to a last-minute rule change over which his campaign cried foul, he hasn’t had much of a chance to make his pitch to a national audience and has instead spent much of his time and campaign resources in Iowa, the first state to hold a presidential caucus in February.

“It’s his first opportunity to introduce himself to 99% of the potential voters out there,” Banville said. “Outside of Iowa, Steve Bullock is more a name on a list and this is his chance to show who he is and really introduce his issues and his personality.” The benchmark to qualify for the next round of debates is even more steep, and Bullock will need to both poll higher and gather more donors to qualify.

Google searches for Bullock rose by 1,400% in the first hour of the debate, with only four other candidates seeing a bigger bump.

John Mues, a Navy veteran and engineer who works in the energy field, announced Thursday he’s running for U.S. Senate in 2020.

A disputed bison bill will not become law after Gov. Steve Bullock and Secretary of State Corey Stapleton agreed to end a lawsuit filed over t…

Montana Gov. Steve Bullock took part in a quick-paced town hall in New Hampshire on Thursday, his second day in a row of events meant to direc…

Bullock responds to GOP lawmakers about pride flag at Capitol

Three western Montana Republican lawmakers are criticizing Democratic Gov. Steve Bullock for flying the pride rainbow flag at the Capitol over the weekend.

State Rep. Forrest Mandeville of Columbus is seeking the Republican nomination for secretary of state.

GREAT FALLS — A California-based tech company plans to repurpose a more than century-old Montana powerhouse into a data center.

The reviews coming in for Montana Gov. Steve Bullock's first performance in the Democratic presidential primary debates were mostly positive, …

The state commissioner of political practices has rejected a complaint filed by Republicans against Montana Gov. Steve Bullock that claimed th…

Montana Gov. Steve Bullock, the last-standing governor in the crowded Democratic presidential primary, will appear on a CNN town hall this Sun…

Montana Gov. Steve Bullock participates in the first of two Democratic presidential primary debates hosted by CNN on Tuesday in the Fox Theatre in Detroit.

Gov. Steve Bullock, Democratic presidential candidate, holds a roundtable discussion with members of the local media in May at his campaign headquarters in Helena.