In a 6-1 decision Tuesday, the Montana Supreme Court overturned a legal opinion by Attorney General Tim Fox, ruling that Gov. Steve Bullock acted within the law when he circumvented the Montana State Board of Land Commissioners to finalize an eastern Montana conservation easement.

As a result of the ruling, the Land Board will no longer cast the deciding vote on conservation easements. Final approval now lies with the Fish and Wildlife Commission, meaning three additional easements already passed by the commission but halted by the attorney general's opinion are now completed.

In February, the Land Board voted to delay action on the $6.1 million Horse Creek Conservation Easement near Wibaux. A majority of Republicans -- Secretary of State Corey Stapleton, State Auditor Matt Rosendale and Superintendent of Public Instruction Elsie Arntzen -- voted to delay action. Fox, who is a fellow Republican, and Bullock, who is a Democrat, wanted to push the easement through.

Stapleton cited a general opposition to perpetual land management decisions, while Rosendale and Arntzen wanted more time to review the concerns of mineral interests and later the appraisal.

The Horse Creek landowners, the Stenson family, said they believed the decision to delay action was political.

The delay prompted Bullock to circumvent the board, citing a narrow reading of the statute and concluding that Montana Fish, Wildlife & Parks conservation easements do not require Land Board approval. FWP then finalized Horse Creek based on a vote of the Montana Fish and Wildlife Commission.

Bullock’s decision drew the praise of hunting and access advocates. The bigger question, they said, was the ability of the state to administer the Habitat Montana program, which takes a portion of license dollars to fund access via easement and land purchases.

Habitat Montana has drawn political scorn from some lawmakers in recent years, both over FWP land purchases that did not see local support as well as a general opposition to expanding state ownership and influence. Conservation groups have maintained staunch support behind the program as an important tool for expanding public access.

Bullock’s decision drew opposition from his fellow Land Board members and a number of Republican lawmakers as unilaterally overreaching. Senate President Scott Sales requested that Fox review the action with an attorney general’s opinion, which carries the weight of the law unless overturned by a court.

The statute is clear that state “land acquisitions” via purchases of land more than 100 acres and $100,000 require Land Board approval. The law does not explicitly mention FWP easements as also meeting that requirement, but Fox’s opinion looked at case law and legislative history to conclude that both purchases and easements fell within “interests in land,” and thus the broader purview of Land Board authority.

Bullock took his case to the Montana Supreme Court with oral arguments heard last week. The justices were asked to interpret the statute on the legal question of whether an easement is a land acquisition.

The court issued its decision to overturn Fox’s opinion Tuesday but did not release a full opinion. Chief Justice Mike McGrath was joined by Associate Justices James Jeremiah Shea, Beth Baker, Dirk Sandefur, James A. Rice and Ingrid Gustafson in the majority. Justice Laurie McKinnon was the lone dissenter.

"The truth is, this case never had to happen," Bullock said in a statement. "We were only in the position of needing a court decision because the attorney general chose personal ambition and party politics over Montana ranchers, hunters and anglers. I deeply appreciate the court taking this up quickly, and am hopeful we can now get back to allowing the Habitat Montana program to serve our state, as it has for decades."

Bullock’s office did not immediately respond to a request to clarify what “personal ambition” he believes influenced Fox’s opinion.

Montana Department of Justice spokesman John Barnes said the attorney general's office had no comment on the decision.

When reached for comment Tuesday, Sales said “I certainly approved of what the AG did and I thought he was on solid legal standing, so I’m disappointed in the court's decision."

Sales said he believes better decisions come when more decision-makers are involved, and he continues to disagree with Bullock’s unilateral action. He believes potential legislation addressing Land Board authority over easements would be moot due to a likely governor’s veto.

“It’s not an exaggeration to say this has consumed our lives for the past year,” she said. “The uncertainty with the AG’s opinion and knowing that this was still not final, it’s a relief to have this put to rest and for the other families in our position to know they can also move this forward is a very huge weight lifted.”

Stenson said the family was grateful for the support they received and for those who did the legal lifting that culminated in Tuesday’s decision. She hopes to see the Legislature, which is likely to take up easements and Habitat Montana in the next session, give the process a chance.

Under the easement, which includes public hunting access, Stenson said the ranch had a good first year, many happy hunters and no negative issues.

Nick Gevock with the Montana Wildlife Federation also praised the decision. With 12 easements totaling more than 86,000 acres facing an uncertain legal path, the group was grateful to the governor for pushing the issue.

"Habitat Montana is one of the most effective and popular access and conservation programs in the West, and streamlining the process to make certain that landowners and the public have a more consistent and less political process ensures that hunter's dollars are being wisely spent and is just good governance,” he said. “With an upcoming legislative session, we hope that our legislators recognize the massive support for this program and reaffirm the Supreme Court decision, rather than make short-sighted efforts to erode the program as they have attempted in the past." 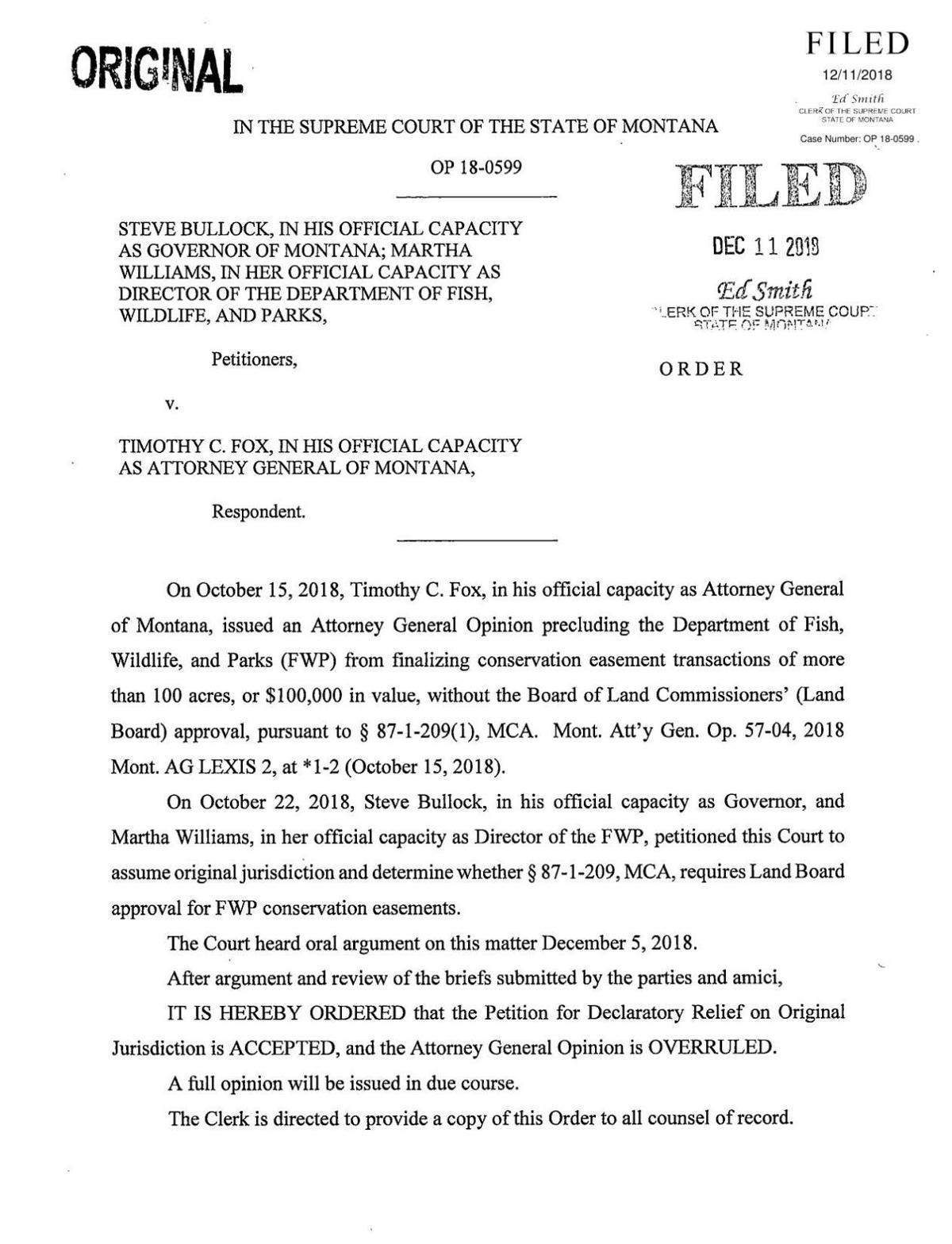 Game wardens are investigating after a dog was caught in an illegally set trap in the Scratchgravel Hills.

The Trump administration closed the spigot on Obama-era water regulations Tuesday, sparking a mixed reaction from Montana industry and conservationists.

A pursuit of a Great Falls man that started in Cascade County ended with a fatal crash in Lewis and Clark County early Wednesday morning.

An audit of Montana's newly reorganized Office of the State Public Defender has found a couple of issues, but the agency head says steps have …

WATCH NOW: Bruce Miller sits down to talk with Oscar nominee Diane Warren about her success