A three-judge panel on Thursday continued blocking the Secretary of State from certifying candidates for the two Public Service Commission districts up for election this year.

In their order, U.S. District Court Judges Donald Molloy and Brian Morrison, along with Ninth Circuit Court of Appeals Judge Paul Watford, wrote that given the candidate filing period for Montana — which opened Thursday and runs through March 14 — the rest of the legal process to determine how to deal with PSC districts that have unequal populations needs to happen quickly.

The judges set a deadline for a bench trial or hearing on the outcome of the case for March 4 at 9 a.m.

In a December lawsuit, plaintiffs including former GOP Secretary of State Bob Brown, former Republican Gallatin County Commissioner Donald Seifert and Gallatin County resident Hailey Sinoff, sued the Secretary of State. They said 2020 Census data showed the state’s five PSC districts did not have close-to-equal populations, which violates the “one person, one vote” principle in the Fourteenth Amendment.

Also Thursday, the Legislative Council — a group of legislative leadership and other lawmakers that provides direction and oversight — met but did not take any action to determine the Legislature's role in any possible setting of new districts.

While lawmakers indicated looking toward their next regular session in 2023 to address the population disparity in districts, echoing the approach pushed by the Attorney General’s Office as it represented the Secretary of State last week in court, the three judges in their order wrote it would not wait.

While “the Legislature has an interest in involvement in the redistricting process, the public’s interest in effective representation and equal voting strength outweighs that interest right now," the judges wrote.

The justices also noting nothing was stopping the Legislature or governor from calling lawmakers back into a special session if they wanted to act before 2023, noting that’s happened 33 times since 1903, for things ranging from “miscellaneous apportions” to “correct action on vehicle fees.”

The Legislative Council on Thursday did not mention the possibility of a special session, but did point to another discussion on the lawsuit in an agenda item for the interim legislative committee that oversees the PSC. That committee meets Jan. 18.

The Attorney General’s Office said in court last week that arguments based on the 2020 census should be viewed in the light of the fact the population estimates from that count weren’t available until late 2021, months after the Legislature adjourned its most recent session. But the court’s order Thursday pointed out earlier census data also showed the districts were not balanced and the Legislature has failed to act in the past.

The court also said that while emails from late December after the lawsuit was filed showed at least one legislator has requested a bill be prepared for 2023 to redraw the PSC districts, that didn’t solve the issue that the districts are not equal as this year's election unfolds.

“While the communications from (lawmakers) — or any like action from other state legislators — may be the impetus for future events that have the potential to render plaintiff’s present action moot, those communications and the legislators’ purported intent have no effect on the ripeness of this action,” the judges wrote.

On Dec. 22, state Sen. Greg Hertz, R-Polson, submitted a draft request for a bill with the intent to "redistrict the PSC districts."

The last time the Legislature adjusted the districts was 2003. A bill that failed in the 2013 session would have redrawn the districts in an attempt at population equity and set up a process to review the districts. While Montana law sets a schedule for when and how to redistrict legislative and congressional areas, it is silent on PSC boundaries.

A year ago, Sen. Doug Kary, a Billings Republican, brought a bill that would have revised the PSC to be appointed positions, eliminating the one-person, one-vote concern. While that bill cleared a committee by one vote, it failed in the Senate.

State Senate President Mark Blasdel, a Republican from Kalispell, said during Thursday’s meeting before the judges’ order was published that he anticipated the Legislature addressing the issue next year.

“With all sincerity we recognize this is something that has to come during the 2023 session,” Blasdel said.

PSC Commissioner Randy Pinocci, whose district is up for re-election and covers a huge swath of northeast Montana, said Thursday the courts should not touch the districts but allow the Legislature to redraw them in the 2023 session. Or, he suggests, lawmakers can hold a special session to redraw them ahead of the election, but Pinocci wagers taxpayers would rather vote with imbalanced districts than pay for a special session.

"Here's another thing we should ask ourselves," Pinocci said. "If we go ahead and change a district, will there be a vote outcome difference in the Public Service Commission? Probably not. … I think the voters would encourage we wait until the next legislative session."

The report details findings of dramatically insufficient staffing — in one case an employee said she thought a patient's death could have been prevented if not for being short-staffed.

But some state lawmakers expressed frustration that the money wasn’t specifically targeted to areas in the state identified as child care “deserts."

In 2021, the state Legislature dramatically increased the amount a person or business could claim in a credit, moving from $150 to $200,000.

What's the status of the 6 Montanans charged after the Jan. 6 riot?

So far six Montanans have been identified as participants in the deadly attack, and over the last year the legal proceedings against them have played out.

Candidates for several Helena-area legislative offices made it official Thursday, registering on the first day of filing to run, with one race…

Omicron not driving increases in vaccine uptake yet

First doses of the vaccine, seen as an indicator of demand, have not increased, according to the most recent data available in Montana.

Candidates have started lining up for the offices up for election in Lewis and Clark County this year.

Firefighters rescue dog from the edge of a cliff in China

Firefighters rescue dog from the edge of a cliff in China 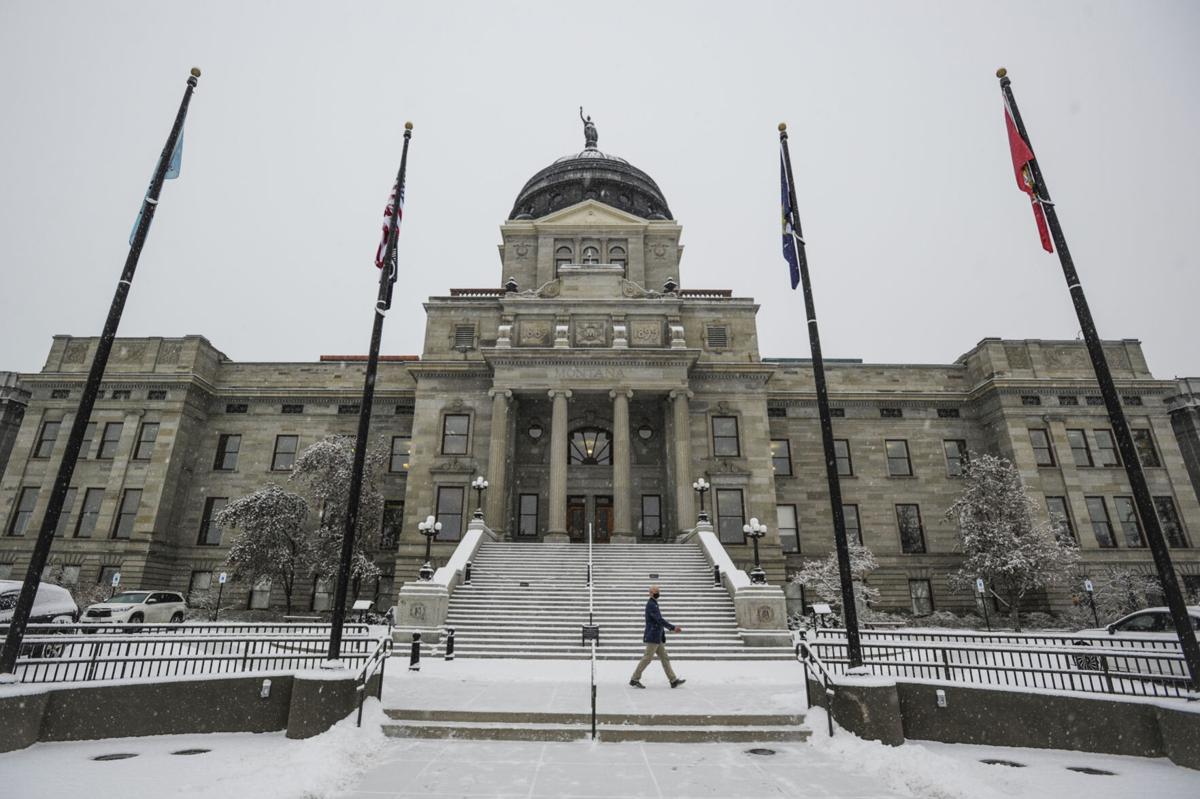 Snow falls on the Montana State Capitol in Helena.