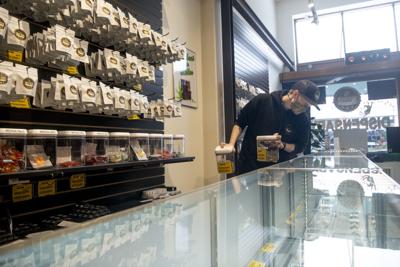 The new year ushered in a new day in Montana, with the prohibition on recreational cannabis sales left behind in 2021.

Seventeen years after medical marijuana providers and patients started blazing the path, recreational cannabis sales opened to the general public Saturday. Some dispensaries in Helena had lines of people packed inside to avoid cold temperatures, while others saw a small but steady stream of foot traffic through noon.

Heidi Morris, a budtender at The Higher Standard, said about two-thirds of Saturday's customers at her location in Helena weren't familiar with the finer points of cannabis yet. But at the Cannabis Corner, J.D. "Pepper" Petersen, the owner and one of the front men for the legalization campaign in 2020, said the large majority of customers had "done their research."

"It's about time," said Frank Harris, 57, after leaving the Treasure Tree dispensary on one of Helena's busier thoroughfares.

Harris lives in White Sulphur Springs in Meagher County, which is a "red county." The regulatory structure passed by the Legislature in 2021 banned recreational cannabis sales in the counties that voted against legalization in the 2020 election, like Meagher County.

Possession and consumption of recreational cannabis has been legal statewide for a year now, following the passage of Initiative 190 in 2020. The Governor’s Office of Budget and Program Planning projected $130 million in recreational sales in 2022, climbing to $195.5 million in 2023 once the moratorium on new businesses ends.

About 58% of voters approved recreational cannabis use in Montana, but a few customers Saturday said the stigma against cannabis is still prevalent.

A Helena man named Mark didn't want to give his name because of some family members who are "not too cool with it," although he hopes that fades in the coming years. He, like others who braved the frigid day, said they feel cannabis is less destructive than alcohol but remains taboo, despite a majority of Montanans voting for it. Mark was never a medical marijuana cardholder, but said he's been "toking" marijuana since the 1970s when he and his friends would get high by the Beaverhead River.

"It never should have been criminalized," he said. "If they give it to cancer patients, that tells you all you need to know."

Another customer, Jeff Radke, 39, said the stigma against weed may last a few more decades, but he's glad to see low-level marijuana crimes taken off the books. As for how Radke thinks about the next generation, he's been talking with his teenagers about cannabis the entire year leading up to recreational sales.

"Nothing makes it less attractive to your kids than you being involved," Radke said.

Saturday was the moment of truth for many who have made marijuana their livelihood. In Missoula, JJ Thomas, owner of The Higher Standard, said it's not been an easy venture.

"I'm thankful for everything, thankful for my health, (to) be able to do this because it's taken a toll on me and my family to build all these stores and get here, but it was a dream I had," he said. "I'm hoping to create a legacy for my family."

Petersen estimated 99% of customers through the Cannabis Corner by noon were buying recreational, as opposed to medical, product. Petersen headed up New Approach Montana, the 2020 campaign to legalize recreational cannabis in the state. He said he's excited for Montanans who have held out on registering as a medical marijuana patient because they refused to be listed in a database.

"We've all been counting down" to this, he said.

An hour after opening its doors, the parking lot at Lionheart Caregiving in Yellowstone County still overflowed with vehicles. Customers sat in their cars, bracing against temperatures that hovered just a few degrees above zero, until stepping inside the dispensary to join the line. Because most of the medical marijuana cardholders had stocked up on their monthly allotment allowed by the state in preparation for a surge Saturday, many of those in line were stepping into Lionheart for the first time.

Among those waiting to show an employee his ID was Chris Powell. Until Saturday, he’d made monthly trips to Colorado, where recreational marijuana has been legal since 2012. For years, the Wyoming man has used cannabis to supplement the medications prescribed for his back. After two surgeries, he still suffers from pain and muscle cramps. Between pills or pot, he said, he absolutely prefers marijuana.

“I’m definitely happy it’s finally available here in Montana. I feel like it’s just like booze in that people should be able to enjoy it, so long as it’s in a safe and controlled way. … I’m grateful for it, and it’s about time,” he said.

Powell said the 1 ounce legally available to him will last him about a month, and he’ll be able to save time and money driving to Montana rather than Colorado.

Several areas of the state have seen providers take to the courts in response to local ordinances officials put in place ahead of recreational sales, rules meant to either foster new business or push it further out of view.

About half of the providers in Bozeman sued the city in late November to reinstate a 20-storefront cap that the city commission voted to lift within city limits. Yellowstone Public Radio reported on Thursday a district court judge sided with the city, which can begin accepting new license applications in one of fastest-growing places in the state.

In October, Yellowstone County began developing restrictions on marijuana sales and production in certain areas in the county, effectively barring nearly a dozen providers from selling recreational cannabis Saturday. The Green Bee and its owner, Neil Kiner, sued the county planning division and the Yellowstone County Commission. Kiner argued he had hired additional staff, expanded his hours of operation and invested in new equipment at a cost of nearly $100,000 that would all be squandered if the new restrictions went into place.

On Thursday, Judge Greg Todd signed an order temporarily allowing The Green Bee to be open to the public for recreational sales "without threat" of violating the county's restrictions and setting a hearing on the case for Jan. 20.

"Business has been wonderful today," Kiner said Saturday. "A lot of our business has been rec customers so it's just really, really great not to have to turn them away."

A few providers did not open Saturday as a measure to mete out product, wary that inventories won't last the wave of new customers. The only providers allowed to sell recreational cannabis are those that were medical marijuana providers on or before Nov. 3, 2020. That means in order to protect medical patients' access to cannabis, providers are telling patients to stock up while raising their prices on recreational sales.

Lacee Monique, owner of Kannatonic Dispensary in Butte, said Saturday afternoon that recreational business “has been steady, not too crazy” all day.

“This is totally a test run day,” she said. “I had no idea what to expect — how many people, how many buying cannabis as opposed to edibles.”

Monique said it felt “totally surreal” to be able to sell to people without medical cards.

Monique has been in the medical marijuana business for 12 years, and she’s vertically integrated. “We grow in Whitehall,” she said. “We’re seed-to-sale.”

In the first four hours of the day, Monique said, “we’ve had 28 recreational customers, but not as many medical as usual. A lot of them probably decided to stay away today because they didn’t want to be in the big crush.”

Corey Baker, a medical customer, took the opposite approach. “I was curious to see how it was going, so I came down,” he said. Baker has been a customer as long as Kannatonic has been open. He has chronic arthritis and has had multiple ankle surgeries.

“It means I don’t have to be on opioids,” he said. “Those don’t always work, and they’re dangerous. But the cannabis always works. I’ve never had a time since I got my card 12 years ago when it didn’t help.”

A former surgical tech, Monique said she got into the business because she understood the value of helping people with medical needs.

“My mom didn’t speak to me for four years,” she said. “My parents were so worried about me. But now, they’re totally supportive. They see it’s a good legal business that helps people. I give my mom salve for her knee and my grandma gets cookies to help her sleep. .. Even now to me it’s more about the medicinal value. I’m not here to just get you f—ed up.

“Unless, of course, that’s what you want.”

At Starrbuds in Missoula, co-owner Jill Broughton said marijuana flower, concentrates and pre-rolled joints were selling quickly, while many customers had questions about other products. A lot of customers were surprised to find cannabis is a cash-only business.

“Oh yeah, people are like, ‘Whoa, is this real?’ and, like, some people were wanting this to happen 40 years ago. So it’s been a long time coming.”

After the medical marijuana industry navigated a winding route of regulatory overhauls, federal raids and Supreme Court rulings, Montanans started the next part of the state’s journey when 58% of voters approved recreational cannabis in the 2020 election.

For this seven-part series, the Montana State News Bureau's Seaborn Larson and Thom Bridge have documented the route providers, local regulators and law enforcement have taken as they prepare for the new cannabis landscape in Montana.

MT bought more than $1.5M in cannabis on opening weekend of recreational sales

The first $6 million in tax revenue will pour into the HEART Fund, a substance use disorder treatment and addiction recovery program.

The governor touted policies and reforms that he believes are creating a pro-business environment in the state.

Thursday marked one year since pro-Trump rioters breached the U.S. Capitol in an attempt to stop Congress from certifying the 2020 election results that favored now-President Joe Biden.

"It feels like the start of an industry," said Bobby Long, owner of Flower, which has dispensaries in Missoula and Kalispell.

Drought causes French river to be crossable by foot

Man acquitted in deaths of 7 motorcyclists

Man acquitted in deaths of 7 motorcyclists 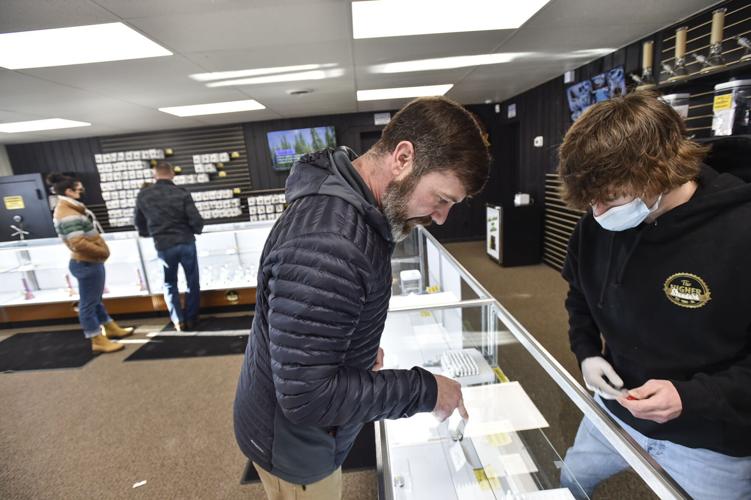 Jeff Radke inquires about concentrate cannabis products at The Higher Standard in Helena on opening day of recreational sales in Montana. 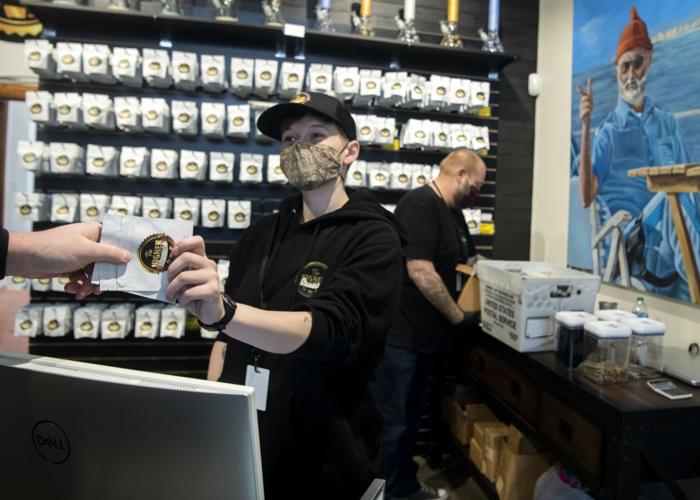 Matty Coen, a budtender at The Higher Standard in Missoula, hands off a pre-rolled joint to a customer at the shop Saturday. 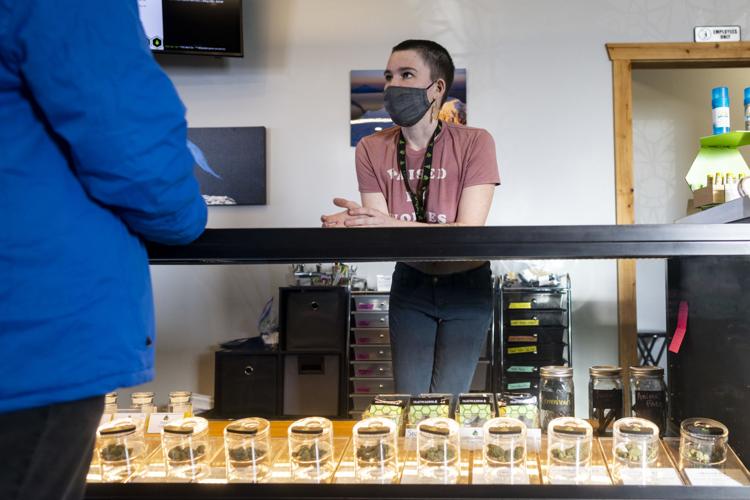 Mikala Winney helps a customer at Collective Elevation in Bozeman on the first day that recreational cannabis sales were legal in Montana. 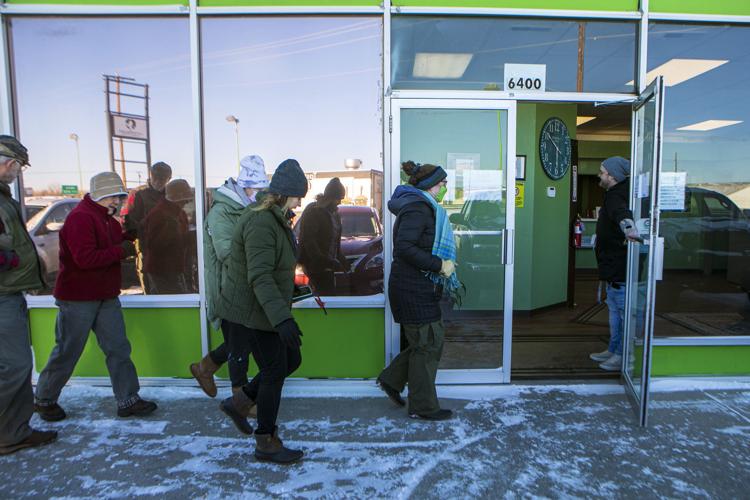 People waiting in the cold are welcomed inside Lionheart Cannabis in Billings during the opening day of legal recreational marijuana sales in Montana on Saturday. 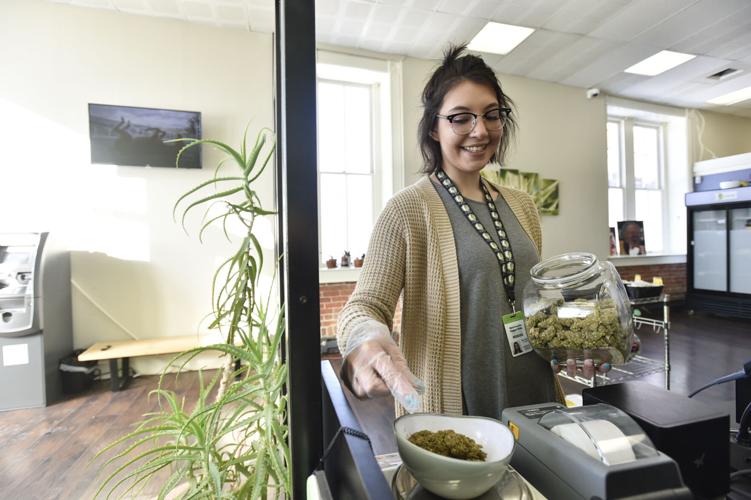 WasiinNaytha RaggedRobe weighs marijuana buds for a customer at Cannabis Corner in downtown Helena in this file photo. 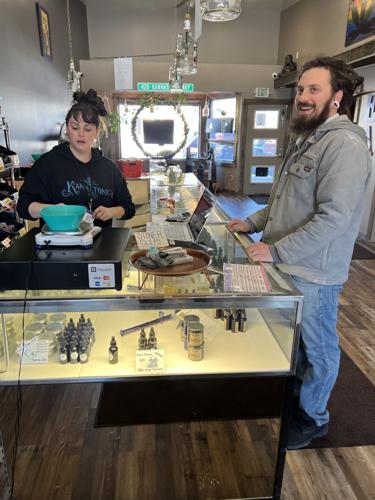 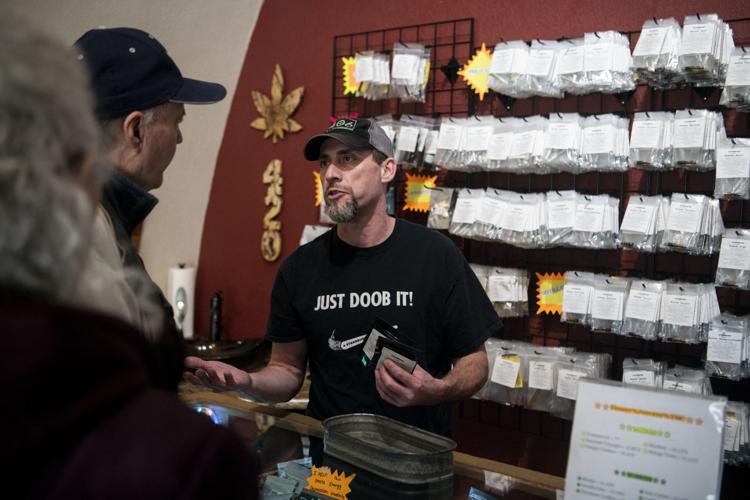 Jason Ward speaks with Howard Vigue about cannabis product at Starrbuds in Missoula on Saturday.