PARADISE VALLEY RANCH — Kneeling down with a twist of burning sage and smoking a bone tobacco pipe, Livingston hunter Mark Sherkenney gave ceremonial thanks to the cow elk he had just shot for providing him food for another year.

It was the one moment of reflection in what had been a whirlwind Wednesday morning. After arriving in the dark and being briefed on this ranch’s hunting rules, Sherkenney and his buddy saw more elk in the first minutes of their hunt – about 300 head gathered in an alfalfa field – than in an entire lifetime of stalking public lands in Montana.

Likewise, Nye hunter Matt Anderson was flabbergasted by the amount of elk he had just seen, resulting in his harvest of a cow elk.

“When we hunt in Nye we’ll see hundreds of elk, but they’re all on private land,” he said. “I’ve never hunted private land before.”

Terance Eichhorn, head wrangler at West Creek Ranch and hunt manager at Paradise Valley Ranch, said some hunters might not be comfortable with hunting elk on open ag fields near large pivot sprinklers.

“But for the most part it’s a great opportunity to harvest an elk,” he said. “The older guys who don’t get around very good, this pivot hunt is the only way they are going to get anything.”

When elk aren’t down on the ag fields, the hunters travel west, climbing about 1,500 feet up Antelope Butte where as many as 3,000 elk have congregated at times. Seeing so many elk in one area can make PVR hunters very excited, Eichorn added.

“Sometimes a little bit too excited,” he said and laughed, since calm nerves and a steady hand are necessary to accurately place the 200 to 300 yard shots.

On this day, five hunters were seeking elk on the Paradise Valley Ranch just south of Livingston in a unique program. In its second year of operation, the Community Elk Hunt has provided free access to tag holders drawn through a lottery. Four bull elk hunts are also offered in a random drawing to Park County residents.

Last year, 147 hunters killed 115 elk during the regular season. This year, the hunt was expanded to any Montana resident with the proper elk tag, although again limited by drawing. As of Wednesday, 101 elk had been taken by 120 hunters.

Based on the average dressed weight of a cow elk, Peter Brown, senior program officer for AMB West Philanthropies, estimated the PVR’s elk hunters received about 40,000 pounds of wild venison.

“I was talking to the game warden and this year we’re the only game in town,” Eichhorn said. “This dry season has them moving differently. That’s why it’s important to have this hunt, to keep them moving around.”

Eichhorn conceived the idea as a way to give back to the community while reducing the growing elk population. Atlanta businessman Arthur M. Blank owns three ranches in the valley totaling almost 26,000 acres.

The Mountain Sky Guest Ranch has long offered free hunts to wounded veterans while the adjoining West Creek Ranch has offered youth elk hunts. The PVR is Blank’s most recent acquisition in the valley, acquired in 2019 with conservation in mind.

“With our ranches’ location in the heart of the Greater Yellowstone Ecosystem, we have an opportunity to be a leader in conservation,” Brown noted in an email. “We are currently focusing on the Yellowstone River, including the conservation and responsible management of the Upper Yellowstone Watershed. We are also committed to managing our lands and associated businesses in a responsible and sustained manner.”

No outfitted hunting occurs on any of the ABM ranches. Nearby outfitters charge about $5,500 to $6,500 for bull elk hunts.

“Anywhere he has businesses, Arthur likes to give back to the community,” Brown said.

Over the past 20 years, Blank has donated more than $12 million to Montana groups.

Such donations are focused on what the ranches’ 135 seasonal employees value or can benefit from, he added, which includes elk hunting.

As some Montana hunters have fumed over free elk tags being given to large landowners to allow minimal public access, the PVR has established a more open and progressive program to let any hunter that wins the lottery to access a huge herd of elk.

“It’s pretty awesome and so nice they allow this,” said Melissa Codner, who accompanied her boyfriend Matt Anderson and also harvested a cow elk. “We really enjoy having meat in the freezer rather than buying it at the current price at the store. We’re so grateful.”

The hunts also help reduce the amount of forage elk consume on the ranches, a sore point in a drought year when range grass has been minimal.

“We realized with the over-objective elk population that we’re having a significant amount of forage loss,” Brown said.

The ranches are located in Hunting District 314 where the elk population was last estimated at almost 4,000 animals. FWP’s objective for the hunting district is 3,000.

“We’re just whittling away at them,” Eichhorn said. “It will be years of doing that before we’ll see a significant change.”

The goal of the hunts is also to push the elk onto public ground, which includes nearby national forest. That helps keep elk and livestock separated, as well as providing hunter opportunity on public lands.

Elk in the Paradise Valley are known carriers of the disease brucellosis, which if transmitted to cattle can cause them to abort. This year the PVR Community Hunt is helping FWP by taking blood samples from harvested elk, along with lymph node and tissue samples. The lymph nodes can be tested for chronic wasting disease, an always fatal neurological affliction. A tooth is also pulled from harvested elk for aging, providing additional information on herd dynamics.

One other benefit of the program is that five seasonal ranch workers are kept on to help with the hunts. Earlier this year that included damage hunts every other day from Jan. 1 to Feb. 15 resulting in 34 hunters taking another 25 cow elk. This year, FWP authorized a late elk “shoulder season” hunt that will run from Nov. 29 through Feb. 15 on private lands north of Big Creek in the hunting district. The hunt is only open to those possessing valid elk B tags.

“That will give us the opportunity to get a few more elk,” Brown said.

The shoulder season hunts on the Paradise Valley Ranch are offered to applicants who weren’t chosen in the initial drawing.

As news of the hunting opportunity has spread, application numbers have risen. Three hundred Park County residents applied for the four bull hunts this year. They are also allowed to bring a properly licensed extra hunter with them to shoot a cow elk. About 1,100 hunters applied for the 66 cow elk hunt opportunities.

In addition to being properly licensed, hunters also have to follow a list of ranch rules, one of which includes a requirement to use copper ammunition. Those cartridges, like many other forms of ammo, have been hard to find. Anderson said he ordered his online and it arrived only the night before his hunt.

Copper was chosen out of conservation concerns, Brown explained. Lead poisoning in animals like golden eagles has been traced to consumption of carcasses and entrail piles left by hunters using lead bullets. Eagles from as far north as the Brooks Range in Alaska have been documented using the Paradise Valley as winter range, Brown said.

For hunters, copper rounds have proven less fatal to game they are targeting when shots aren’t placed properly, Eichhorn said. He stepped up from a .270 rifle to a .30-.06 so he could fire a heavier bullet with more force. He also uses a hollow-point bullet to increase expansion of the round. Otherwise, the bullets have been known to pass through an animal leaving only a small hole.

Guide Sam Blanton helped Sherkenney get close enough to an elk so he could make a shot at 283 yards. Previously, the five elk he had shot were within about 70 yards, he said.

Blanton, a Livingston native, has been working at the Mountain Sky Guest Ranch for three years and guiding hunters for two.

“I think it’s great that we can get locals out here and give them the opportunity to shoot an elk for free,” she said, noting that the hunters get very excited seeing the large herds of elk they would never see on public land.

“They’re happy they get to do this. They are always very grateful for the opportunity,” Blanton said.

Sherkenney was proof of that, with two cow elk loaded into the back of his sagging Ford Ranger pickup he took some ribbing.

“I think we reached the weight capacity of your Ranger,” someone joked.

“No way,” Sherkenney said, a wide grin spread across his face. “I have an extra leaf spring on here.”

Finding room in his freezer for the cut up meat, however, may be a greater challenge.

For more information on the hunt, log on to pvrhunting.com. 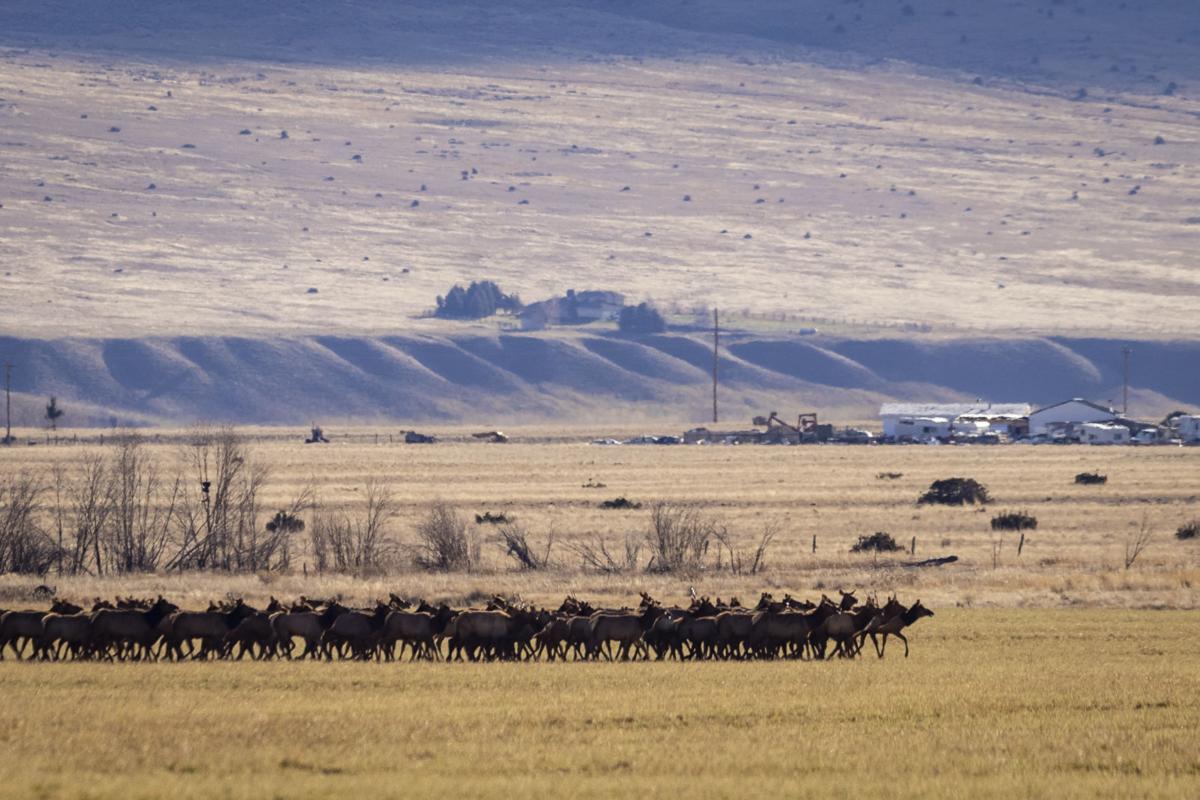 A large herd of elk moves across an irrigated field at the Paradise Valley Ranch south of Livingston on Wednesday, Nov. 17. 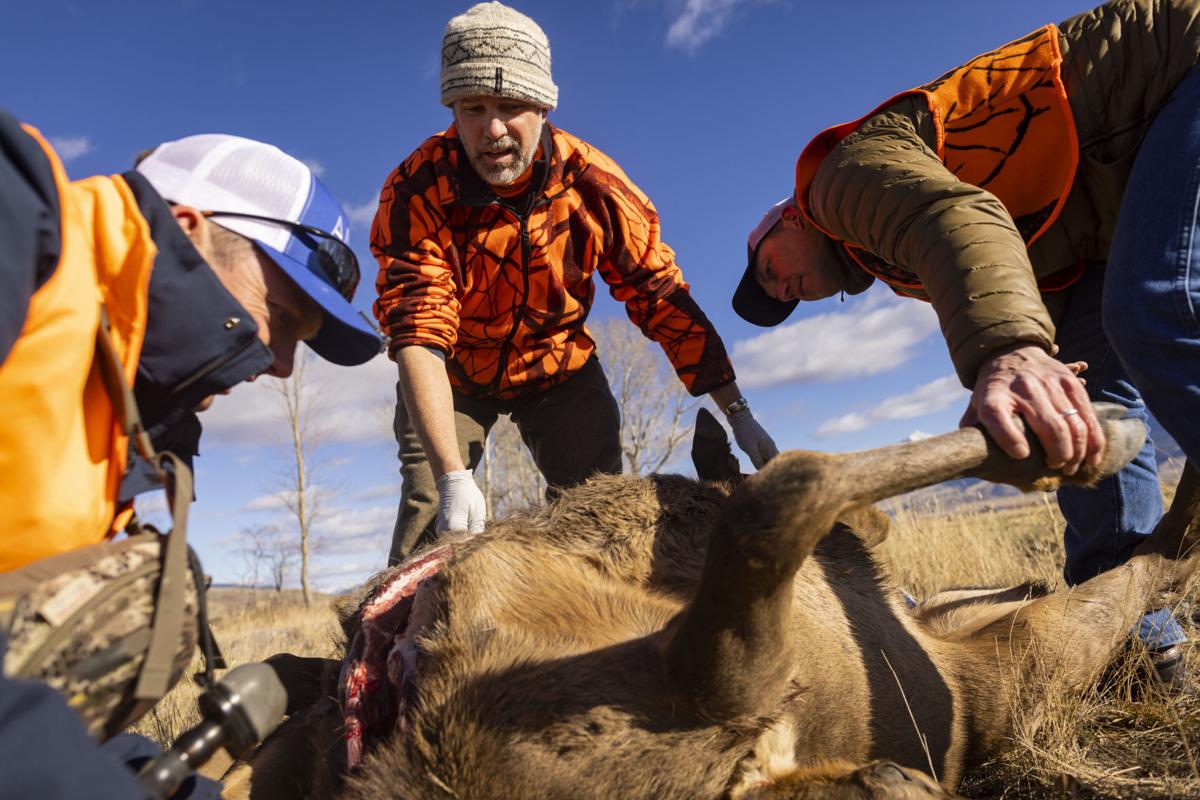 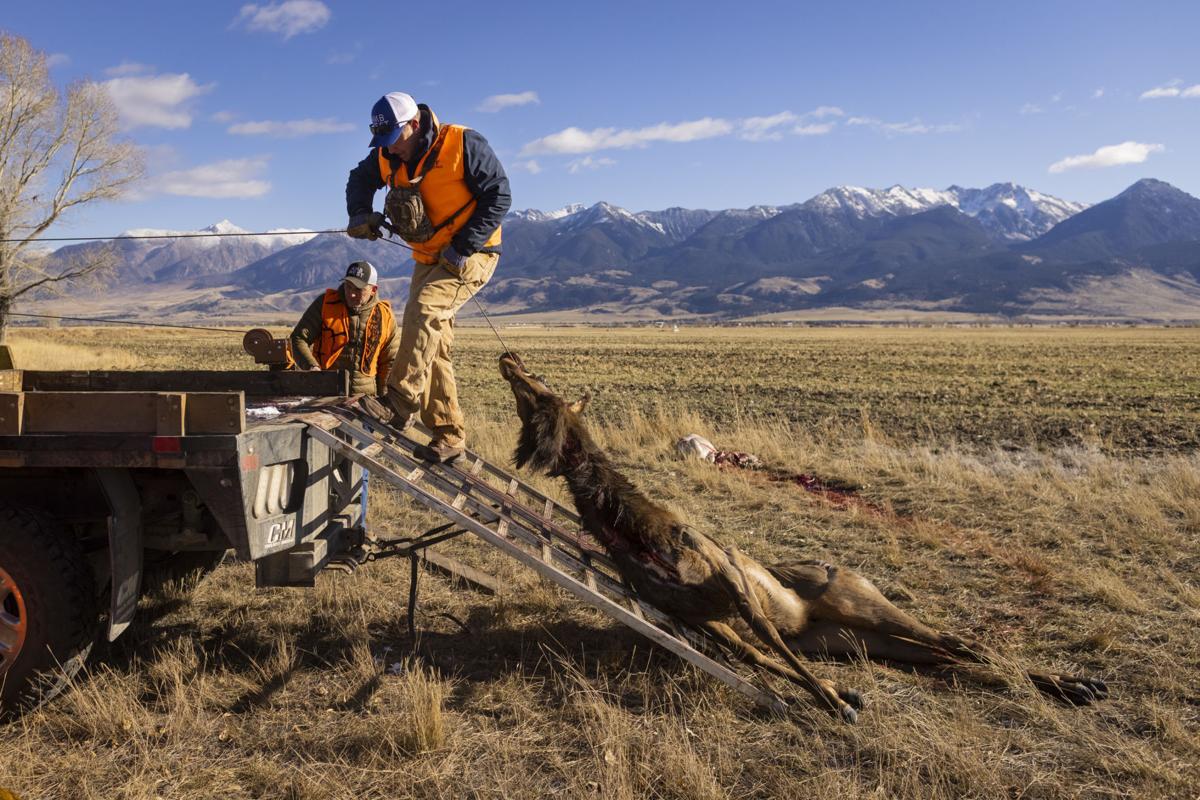 Terance Eichhorn, right, and Peter Brown hoist an elk onto a truck at the Paradise Valley Ranch for transport back to the office and reloading into hunter Mike Sherkenney's truck. 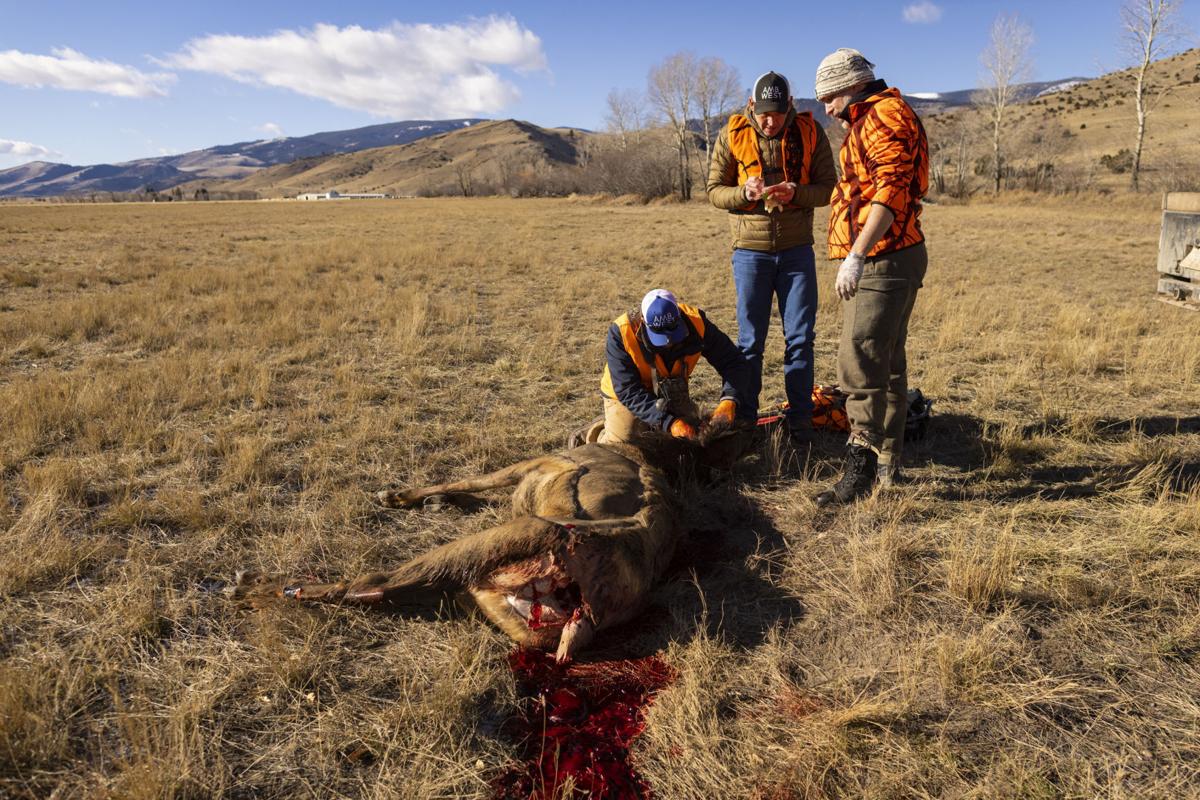 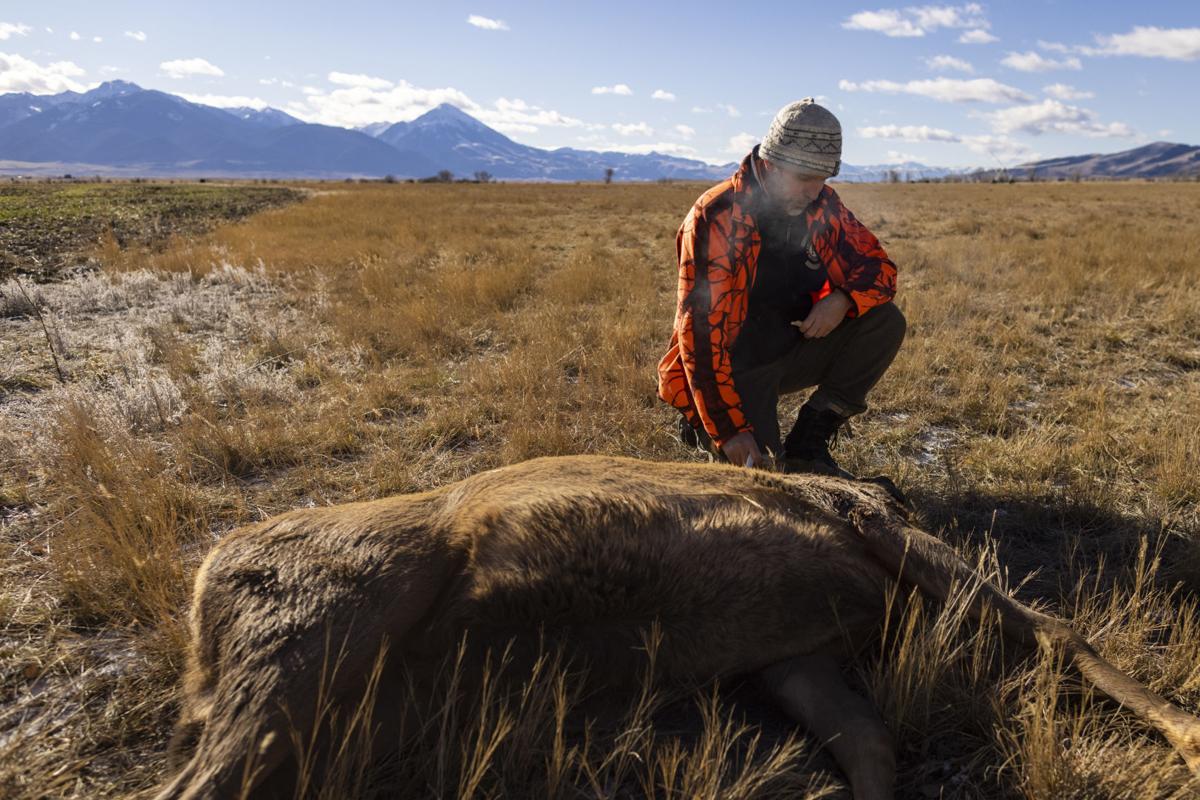 Mark Sherkenney takes a quiet moment to thank the elk he harvested for the meat it will provide. 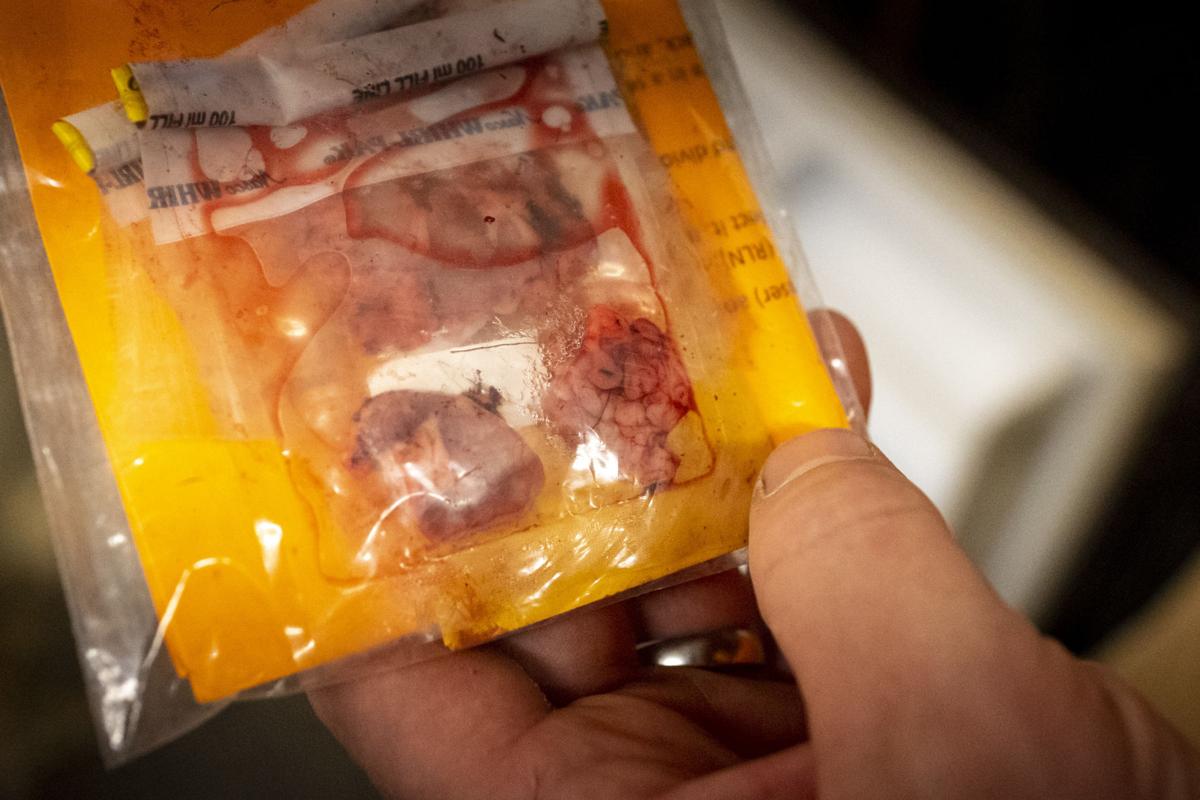